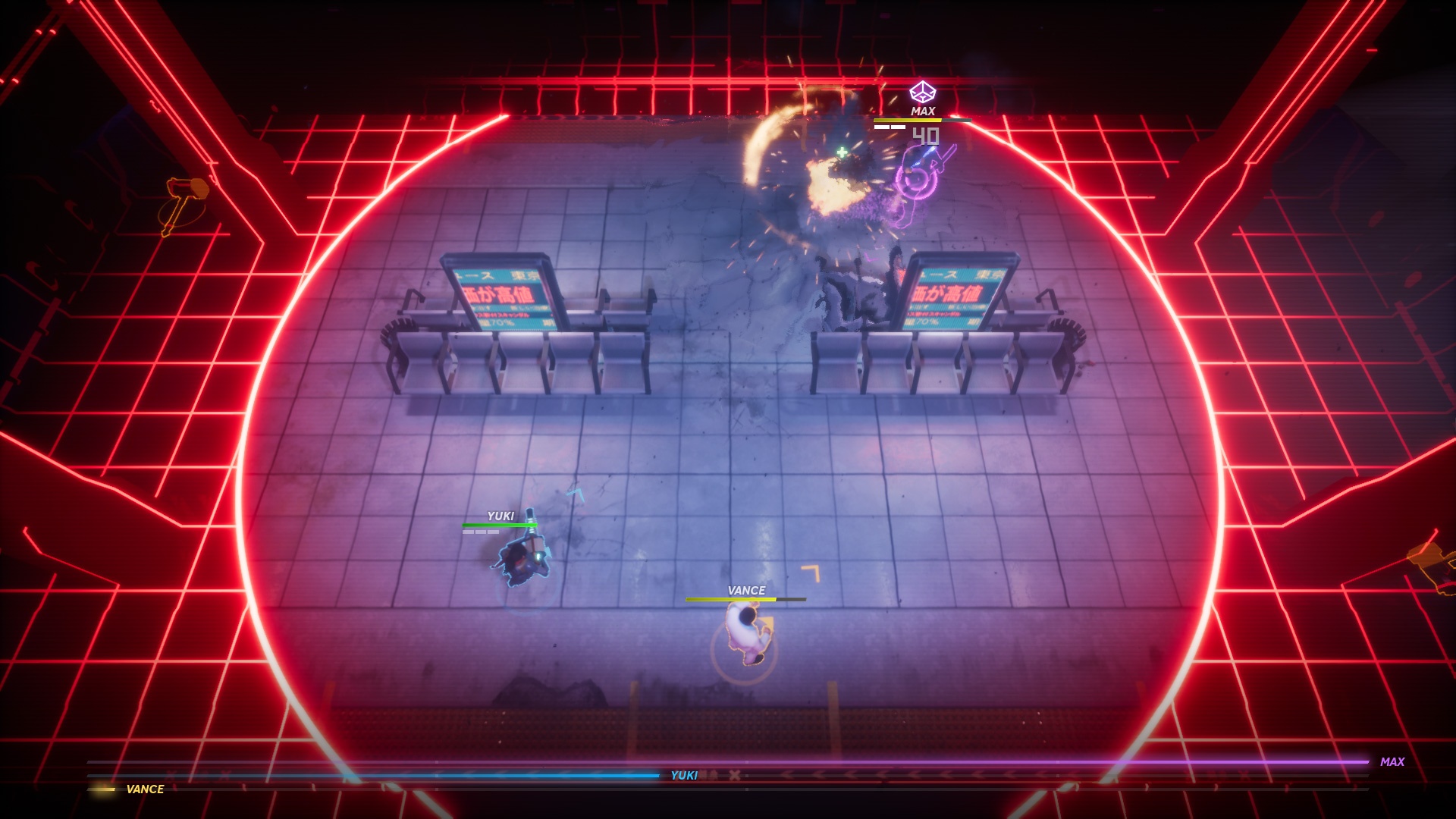 Hyper Jam is an assault on the senses. The moody neo noir maps and heavy synthwave beats are the perfect match for the fast paced combat of the tiny battle arenas, all of which make for a claustrophobic but ultimately fun experience that’s hard to say no to. It might be a little maddening but it’s certainly a blast.

Entirely top down, Hyper Jam pits up to four players against each other in deathmatch style brawls. Rounds are usually over quickly, but any that drag on subject remaining competitors to sudden death, where the map slowly closes in, forcing you to face each other in close quarters. While you spawn empty-handed both melee and long-range weapons drop consistently throughout rounds. All weapons can be charged to unleash a stronger attack, but ammo is limited so it’s important not to waste precious resources.

The game handles great, from movement to weapon handling, it’s fast and fluid and I’ve experienced next to no hiccups. On top of the basics, you can dash away from enemies as well as block and parry enemy fire which is incredibly useful when low on health. Some of the weapons (particularly long-range ones such as the bow and arrow) take a little getting used to as it can be quite difficult to aim but it just takes a practice to master each piece of equipment. 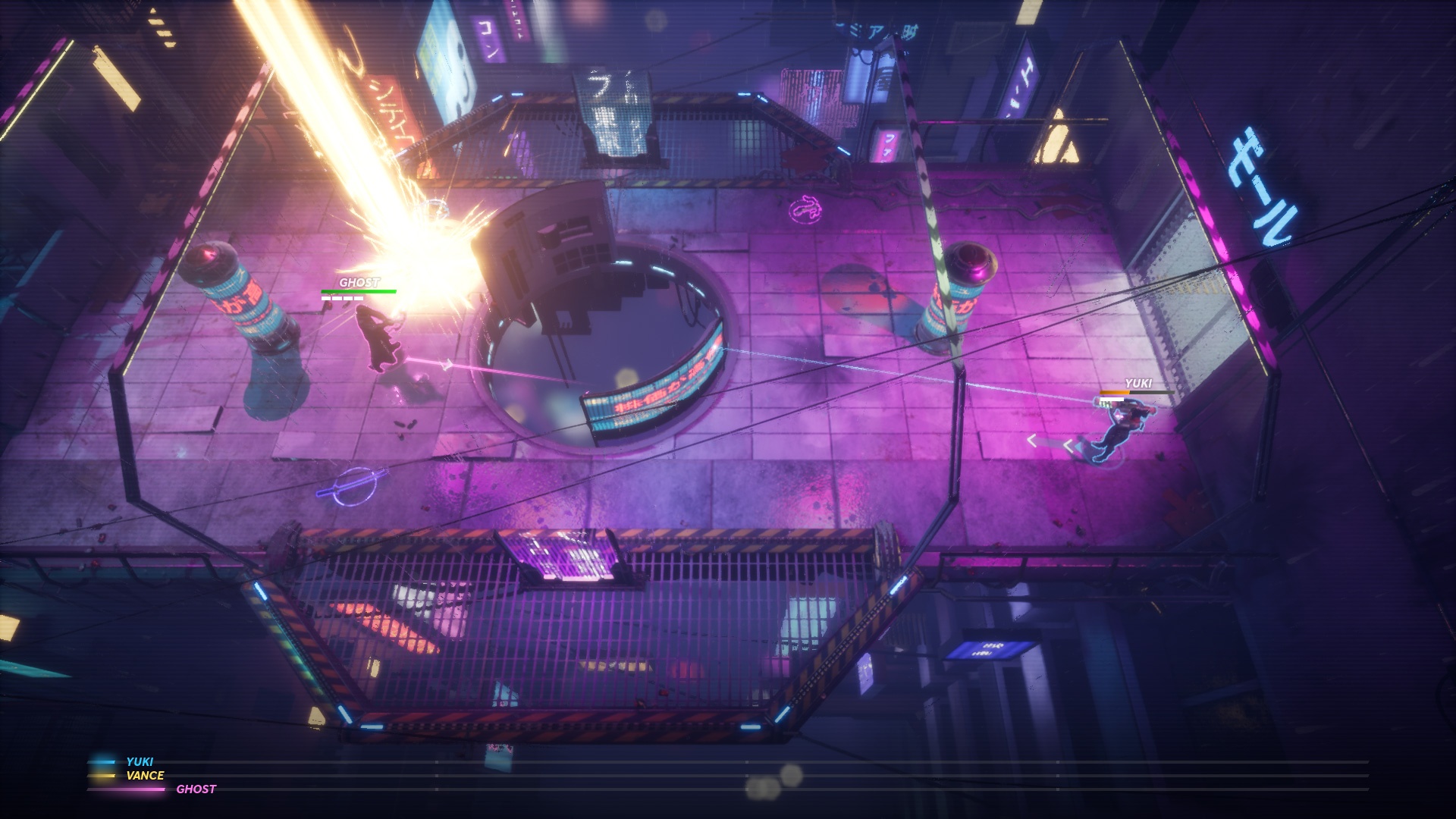 There’s a focus on pacing in Hyper Jam, so even in death you can have a say in who lives and who dies. This is because once defeated you can target the map, sending down a barrage of missiles that hurts anyone in their way. It stops players from staying still for too long and, in the event someone is on their winning round, you can stop players clinching victory.

Round length is entirely down to how well players are performing, and I’ve experienced anything from five rounds to thirteen. This is because earning kills increases your points and when you achieve enough, you have to survive a final round to steal the victory. While it might seem unfair to make you complete that last round to actually win, it gives other players a chance to catch up, making for some super tense action as you battle for the prize. Any number of players can achieve enough points to score victory and if all four players are at that stage, the final round is incredibly exciting as everyone is forced to duke it out to victory.

Between rounds players pick from a set of perks to help them in combat. The worst performing player picks first and so on until all are gone, giving players who are struggling a chance to grab a perk they feel will benefit them the most. It’s a really interesting system and all the perks are genuinely useful. You’ll certainly have your favourites, but there’s enough variation to cater for all playstyles. For example, if you want to buff yourself, you can increase your health, but if you want to be more aggressive you can make your attacks freeze or burn your enemies. Perks can be stacked too, meaning you can further how well these abilities perform. Basic perks are useful, but fully developed abilities can prove absolutely deadly on the battlefield.

The four characters you can choose from are purely cosmetically different but levelling up unlocks new skins and taunts, allowing for some customisation. The latter are arguably pointless as the game is far to frantic to stop and mock your enemies, but it’s an incentive to play nonetheless.

Not that you’ll need incentive. At the time of review the servers aren’t up to see how it plays online, but with a bunch of friends it’s enormous fun. Even if it doesn’t become the next Overwatch, I can see myself picking up Hyper Jam when I have friends round for some healthy competition due to its simple pick up and play ethos. 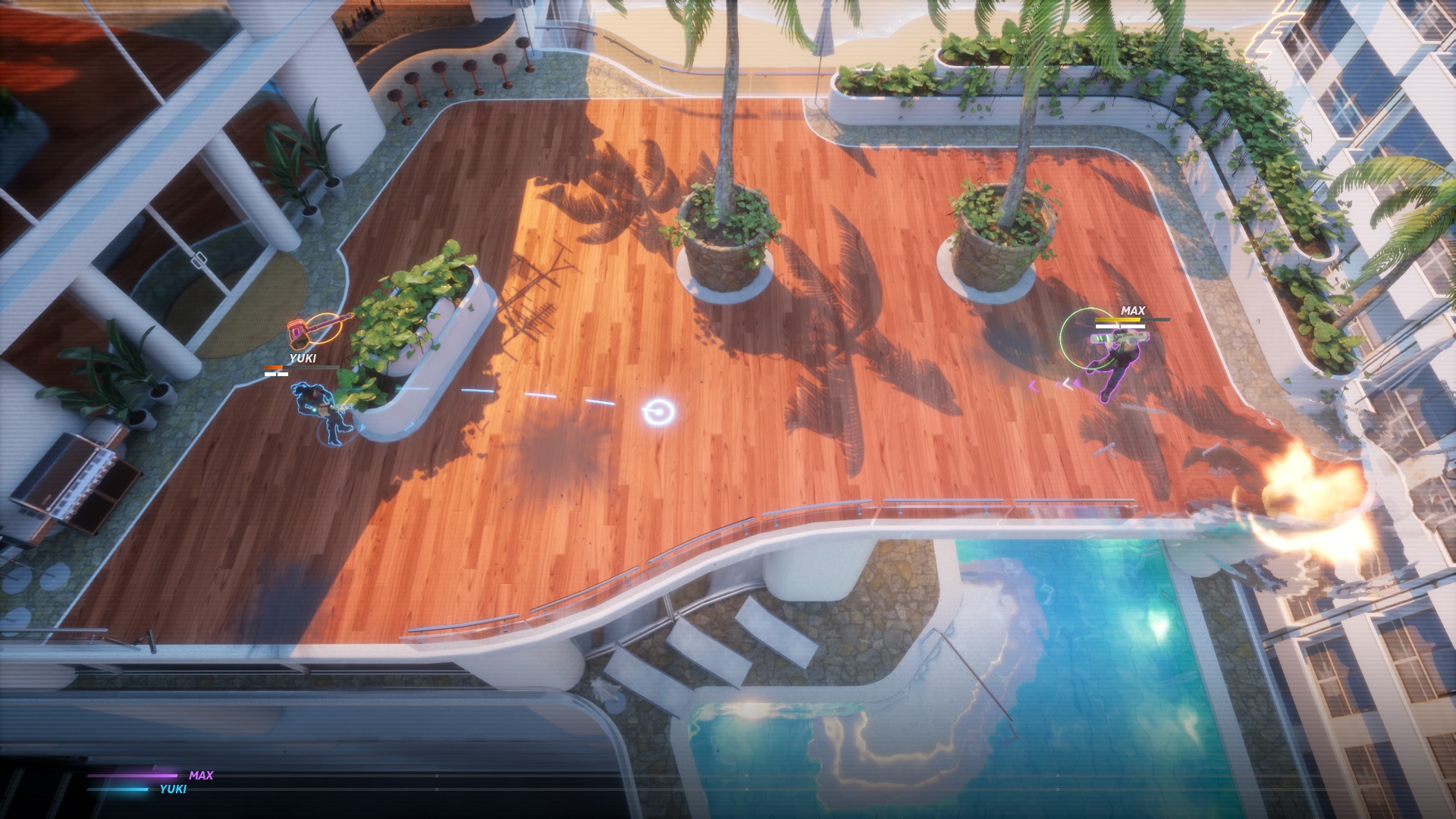 Initially the game comes with six maps, all purposefully restrictive to encourage players to keep moving and avoid temptation to hide away from combat. There’s plenty of variation between locations, from lush jungles to futuristic rooftops and almost all have some form of environmental hazard to either avoid or use to your advantage. A great example is an assembly line map, which includes moving cover and floor panels that open up, both of which force you to stay mobile, especially if you want to either remain in cover or avoid plummeting to your death.

And even if arena brawlers aren’t your thing, it’s hard not to be entirely satisfied with the aesthetics of the whole package. It looks simply gorgeous and it’s incredibly dedicated to selling it’s futuristic setting, from character design to the heavy synth beats that play over each map. If you’ve even the slightest interest in the likes of Blade Runner and its contemporaries, then Hyper Jam is a love letter to some of the best sci-fi in memory.

But while Hyper Jam is a solid brawler, at launch it’s light on content. With only four characters, the low map count and the only mode being deathmatches, it’s hard to say how quickly fatigue will wear in, but if Bit Dragon dedicate themselves to making Hyper Jam what it could be, then this will be a mammoth indie hit in a year or so. But while I long for more, I guess in a way I’m missing the point; despite my selfish needs, Hyper Jam is reminiscent of when games were purely about having fun rather than fitting in as much variety as possible. It’s the kind of game I’d have my friends over after school to waste hours on, regardless of content and it’s rare to find a game that gives me the same giddy feelings I experienced way back then.

Slick combat with a unique perk system make the gameplay fast, frantic and fluid, while the synth soundtrack and gorgeous graphics make it a treat to play. Yes it’s light on content but as far as early days go, Hyper Jam is on to an absolute winner.

Slick combat with a unique perk system make the gameplay fast, frantic and fluid, while the synth soundtrack and gorgeous graphics make it a treat to play.