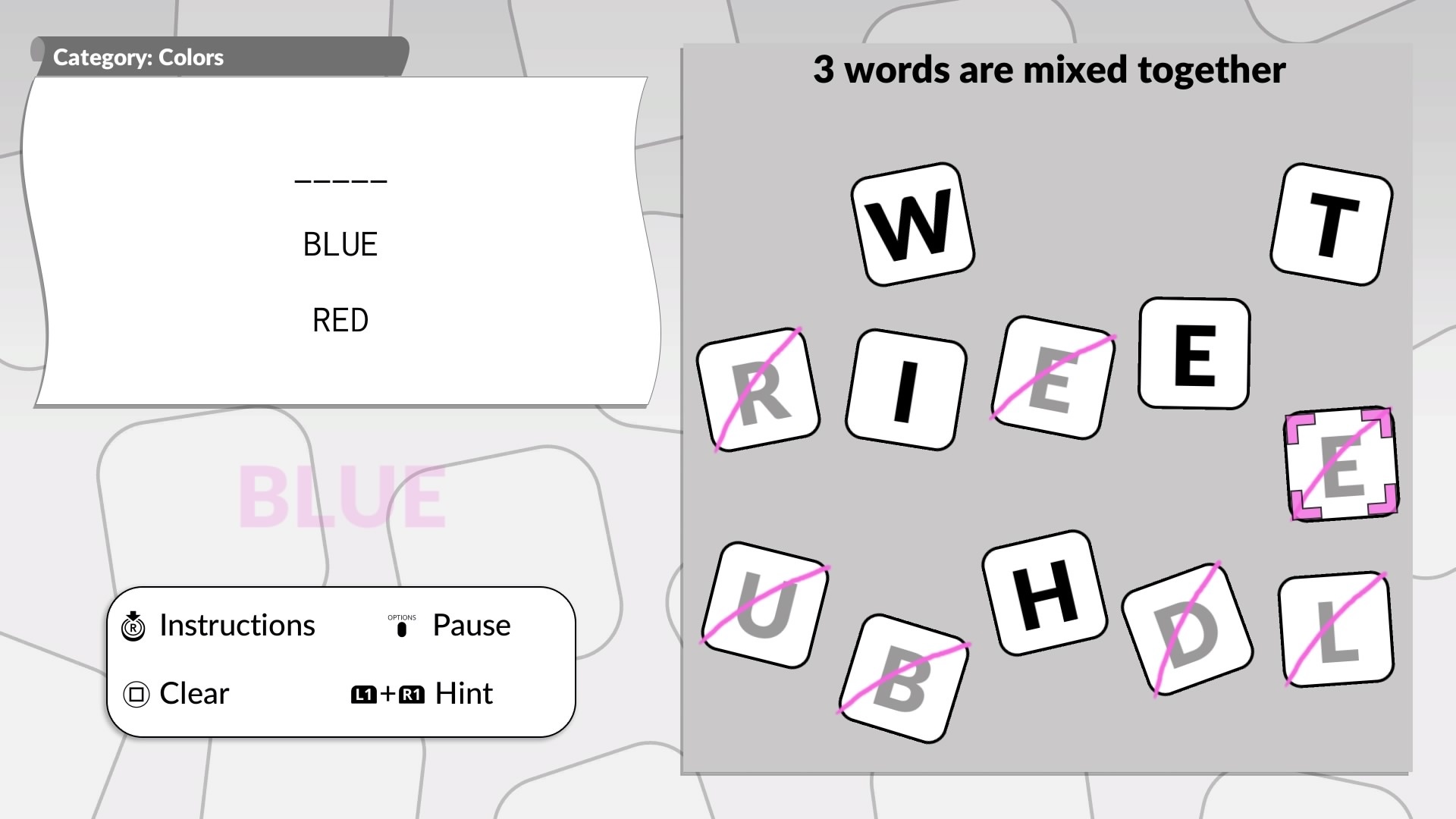 After Word Sudoku and Word Search you would wonder what the next title would be from Lightwood Games under the POWGI brand. Well you’ll be lucky to find out Mixups by POWGI is the name of the latest entry into the series. What does Mixups means you may ask? This time around, 3 words are hidden within a bunch of lettered tiles and you have to find them. It’s almost like a word search but probably could be described better as an anagram game.

As discussed before it’s difficult to score a game like Mixups by POWGI because it’s a very simple premise replicated onto a console. There isn’t much difference between Mixups by POWGI being on a console and it being presented in a magazine/newspaper in terms of format. There are 12o levels each with its own theme which is reflected by the words that have to be found. 3 words need to be found, the letters to the words are found in the jumbled word tiles to the right of the screen. Each letter tile can only be used once. When a word is found it will appear to the left and it’s letters will be greyed out. There are 6 stages to each level, so 18 words per themed level need to be uncovered. 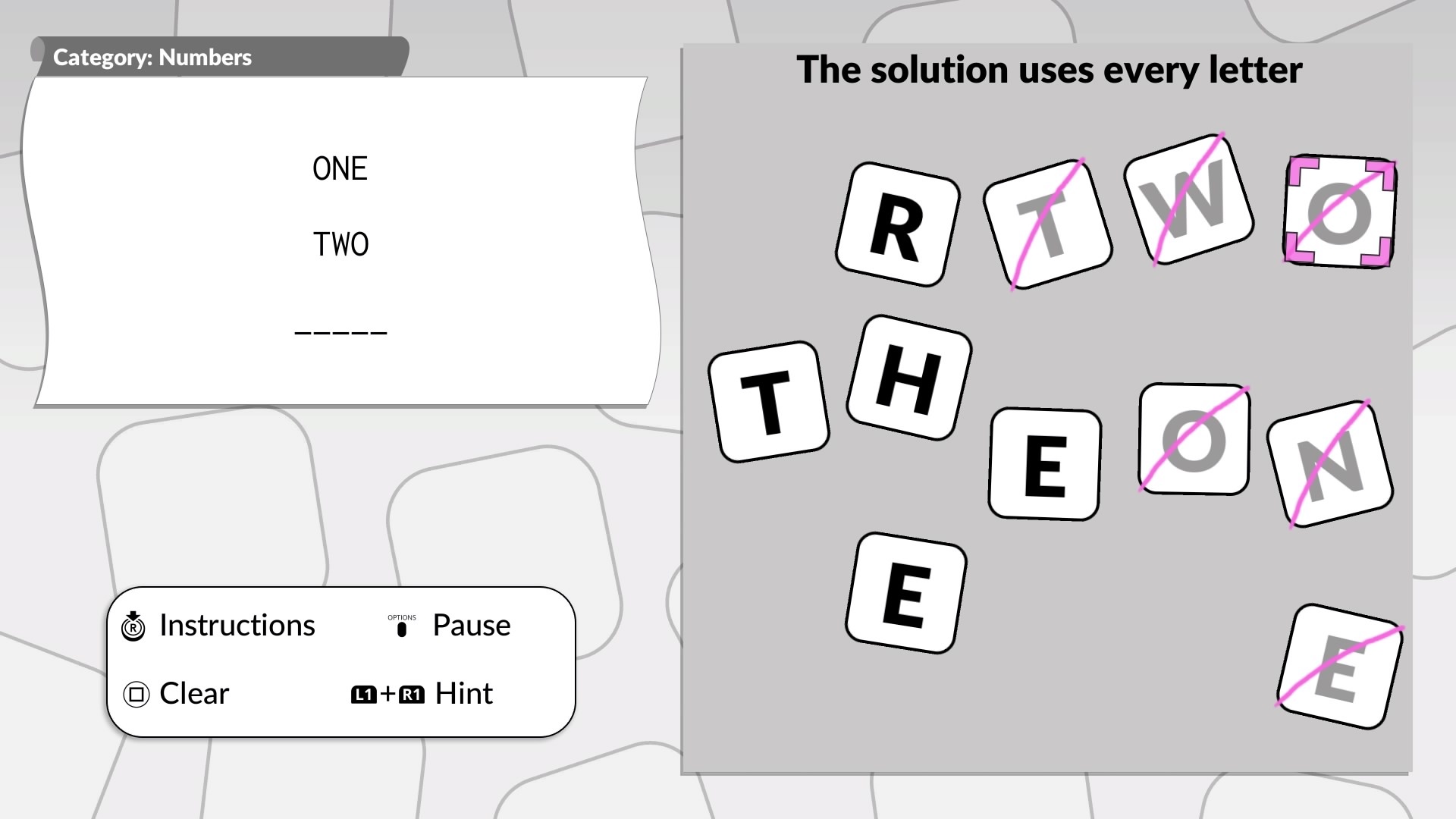 That’s pretty much it for Mixups by POWGI in terms of how you play it, there’s nothing else to get to grips with. The themes vary from quite specific areas such as Bread whilst others are grander in regards to subject matter such as Sharp Things. So the kind of words you will find in the Bread level would be Rye, Pretzel, Yeast etc, in one way you will learn a lot more about certain subjects, so you could say Mixups by POWGI is educational to some degree. However other subjects such as Sharp Things will include words like Scissors, Hedgehog and Ice Pick, so not much to learn there. The levels are not randomised so there’s no change to a level if you go back to it which I think is a missed opportunity as it would add more to the challenge.

There is a hint system in Mixups by POWGI, not much to say about the hint system besides it works, it’ll give you a hint i.e. the first letter of a word. The larger words are often the most difficult to find so it’s highly recommended to try and get the smaller words first. If you choose this tactic then you’ll reduce how many letter you need to consider. For the Platinum hunters out there Mixups by POWGI is a fairly easy game to get the platinum for because you only need to select certain levels and complete them to get the platinum trophy, you don’t need to complete every level. That’s probably the biggest issue with Mixups by POWGI, you don’t need to complete a level to uncover the next, they are all playable from the start. 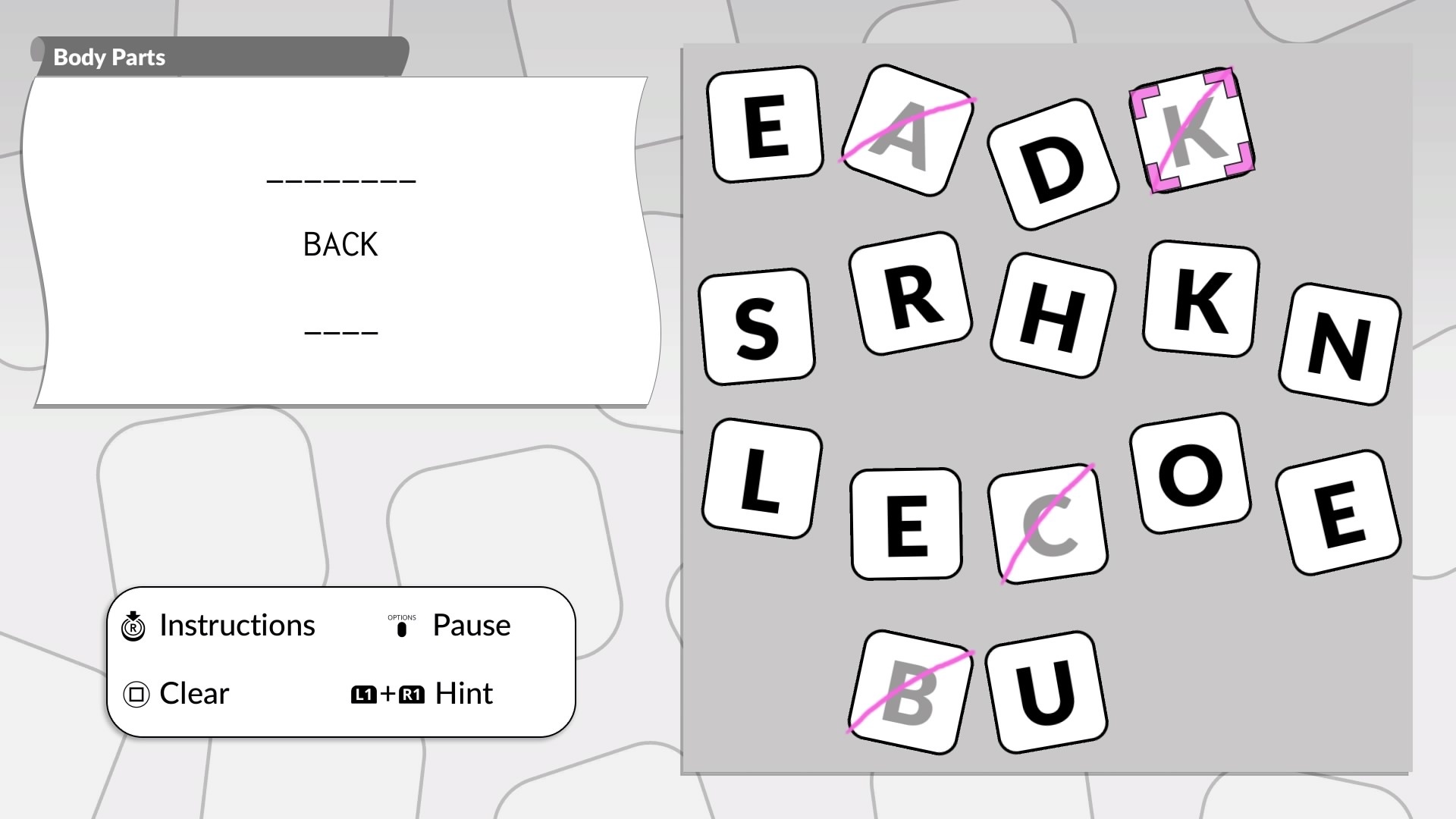 From a presentation point of view, Mixups by POWGI follows in the same vein as its previous titles. It’s a combination of mostly black, greys and whites, Mixups by POWGI is a very bland looking game. There’s a cute dog that appear at the end of each completed level with a statement, unfortunately these statements are nothing more than a few words congratulating you or being in awe of your Mixups skills. Musically Mixups by POWGI contains what could easily be referred to as elevator music, it’s not annoying but Mixups by POWGI is a very simple game so it should be accompanied with simple music.

Mixups by POWGI is effectively an anagram game using a very basic and bland presentation. Structurally it works fine and if you’re a completionist then you’ll want to get through every level which will take 4 to 5 hours. However beyond that Mixups by POWGI doesn’t have any else to offer, there are no online scoreboards, there are no challenges and each level follows the same rules. If you liked the previous two titles then you’ll probably like Mixups by POWGI, but if you didn’t, Mixups by POWGI will not change your mind.

POWGI is back and it wants to mix things up with Mixups by POWGI.