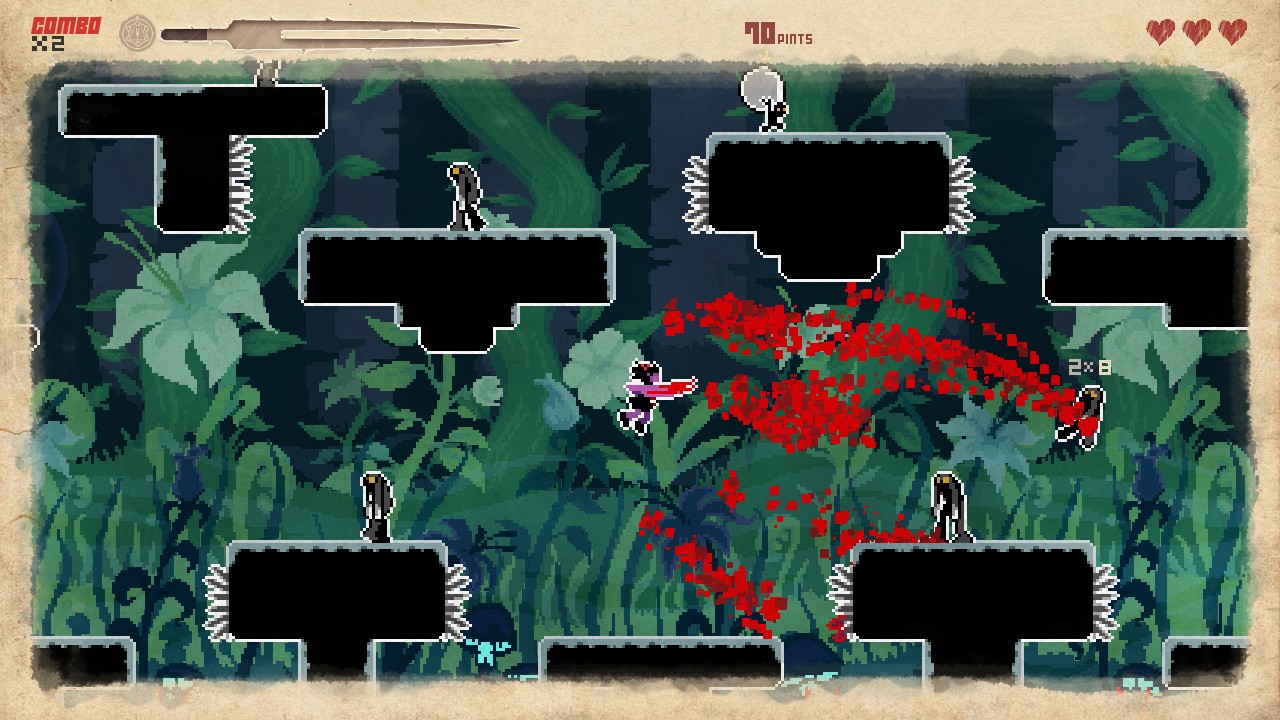 The spooky season is upon us! Halloween is nearly here, and there are some great games coming out of the woodwork to get into the proper mindset. While I recently took another reflection on the Korean horrorfest of The Coma, it’s time to change gears a bit and look for the atmospheric scariness that comes with well designed gothic arenas. Sometimes, the scariest parts of a game aren’t the story or the big monsters, but the punishing, eternal pain of a game designed to absolutely tear you apart. Chalk up another win for the little indie machine that could, because Nintendo Switch fans now have They Bleed Pixels.

They Bleed Pixels comes to us from Spooky Squid Games, which is such a delightful moniker. Our protagonist is a young, nameless woman who is a new and seemingly reluctant addition to The Lafcadio Academy for Troubled Young Ladies. A dark and dismal place, our heroine is plagued with bad dreams that culminate into her wandering into the library to discover a bleeding book. You know, the kind that you find on the shelves normally? She opens up this book and is awash in Eldritch knowledge and magic that transforms her into some kind of horror, vaguely girl-like, but now equipped with wicked talons and a perchance to run, jump and stab the hell out of things with reckless abandon. Something awful is going on, and it’s up to her to find out what that could be: after all, you don’t end up with this level of dark magic coursing through your veins from going to Cushing Academy.

They Bleed Pixels is a deathcore platformer that promises to make you frustrated, angry and stressed in all the best ways. After a short introduction, you quickly dive into the worlds where you need to navigate through enemies, traps and hazards with reckless abandon, occasionally seeking out hidden and lost items that will help unlock better scores and a bit more about the arguably thin story that exists. Everything you need to survive all the way to the end is given to you in the short tutorial that is mandatory when you start up the game. You can jump, double jump, wall jump, kick and stab. You have a dash stab when you’re moving forward, and the kicking acts as both a way to toggle switches and a way to stun or push back enemies. Kicking enemies straight up can either clear your path or set them up for a midair combo stabbing, which is very satisfying to do. All the while, you also keep an eye on a purple meter at the top of the screen that will slowly fill up as you kill enemies and pick up red orbs scattered throughout the game, as successfully filling the meter is the only way to save your progress. 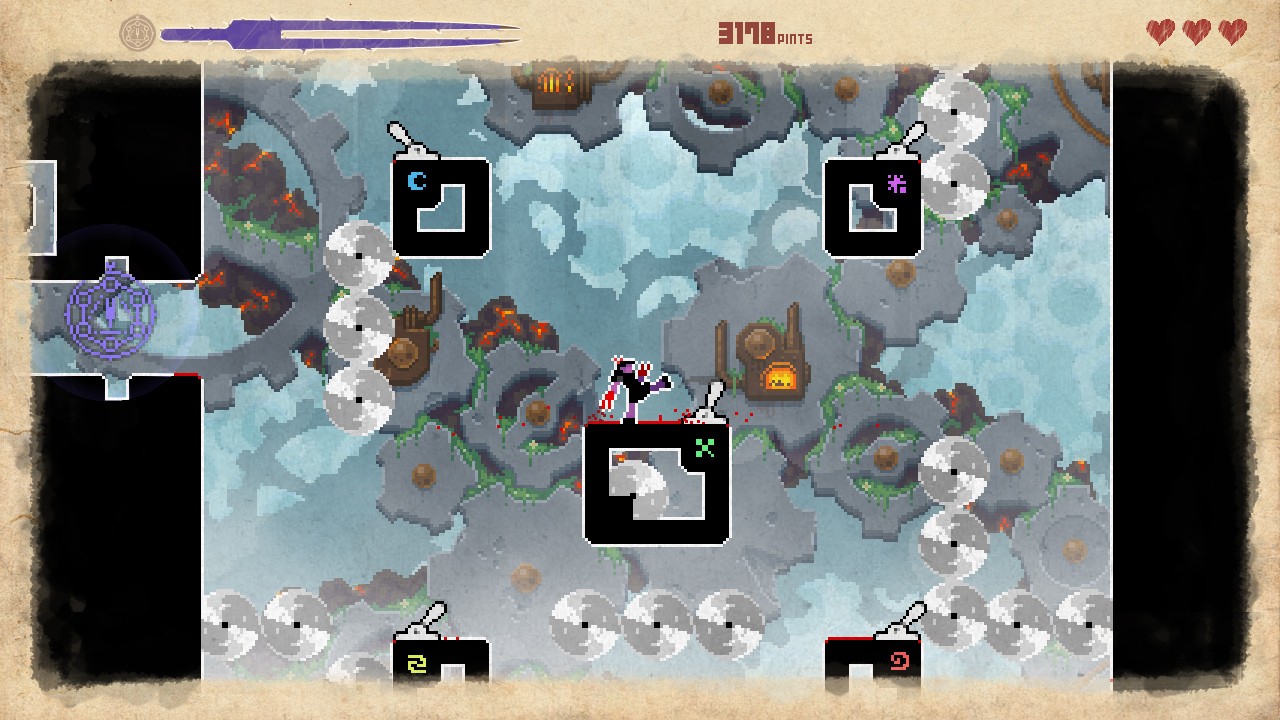 This is where the genius in the simple design of They Bleed Pixels starts to shine. You see, the only checkpoints that exist in a game where every level is crafted to murder you as efficiently as possible is yourself. When the meter is full, you need to physically stop and be still for a couple of seconds in order to generate a checkpoint. This is such a great caveat, because it entails a.) that you stop moving long enough for the game to register your pause and b.) that you’re in a safe enough zone to successfully put questing on hold. While this might seem easy in theory, there’s a bit about the momentum that really makes an important stance within the game. At the beginning, there are plenty of opportunities to find safe havens where you can relax and “save,” for lack of a better word. As the game progresses, though, these spots become more difficult to identify, and you also don’t want to let your guard down for a second, because the number of hits you can take before getting exploded is fairly low.

They Bleed Pixels is going to be one of those titles where you’re instantly going to be hooked or perfectly hate it within two minutes. The graphical design is fantastic, there’s no disputing that. Thanks to some great pixel craftsmanship combined with a clear vision, Spooky Squid has created a game that’s got a sharp gothic tone that allows for some of the supernatural elements to work well with the more retro aesthetic. You’ve got slightly deformed monsters that add to the suspense, and our protagonist is both recognizable and slightly blurry at the same time. You know, like you’d probably feel if you were imbued with the darkness of a world beyond our understanding. While nothing quite matches the beauty of the cutscene screens when more of the story unfolds, the gameplay graphics are still on point, and they work incredibly well with the soundscape. I loved the way the music distorted and slowed to a stop every time I died, and I died plenty, so I got to enjoy that as much as you can fathom. There’s no doubt there’s a clarity in the how and the why of They Bleed Pixels, and it shines through in every moment.

When it comes to the gameplay itself of They Bleed Pixels, it’s all about the tight, fast and accurate button input. This might seem like the most obvious statement ever, but let me expand. Spooky Squid made the call to marry all the actions to a singular button, with there only being two to worry about: Jump and Other. Jump is not a problem, simply because you’d think that you’d figure out the core ideas of jumping by now. Other, however, is a different kettle of fish. You stab only if you’re pushing towards an enemy. If you do it from a distance, you automatically dash a pre-allocated distance. Only pushing action right next to the enemy causes you to kick, and holding down action causes you to kick them up instead of back. This is all small, innocent sounding differences that can be the life or death mismatch of a lifetime if you’re not careful. Every level of They Bleed Pixels is set up to make sure that the smart and quick survive and the slow and foolish get impaled on bloody spikes. A serious half second of hesitation is the fastest way to get murdered by; bats, bombs, stabby blobs and other monsters. 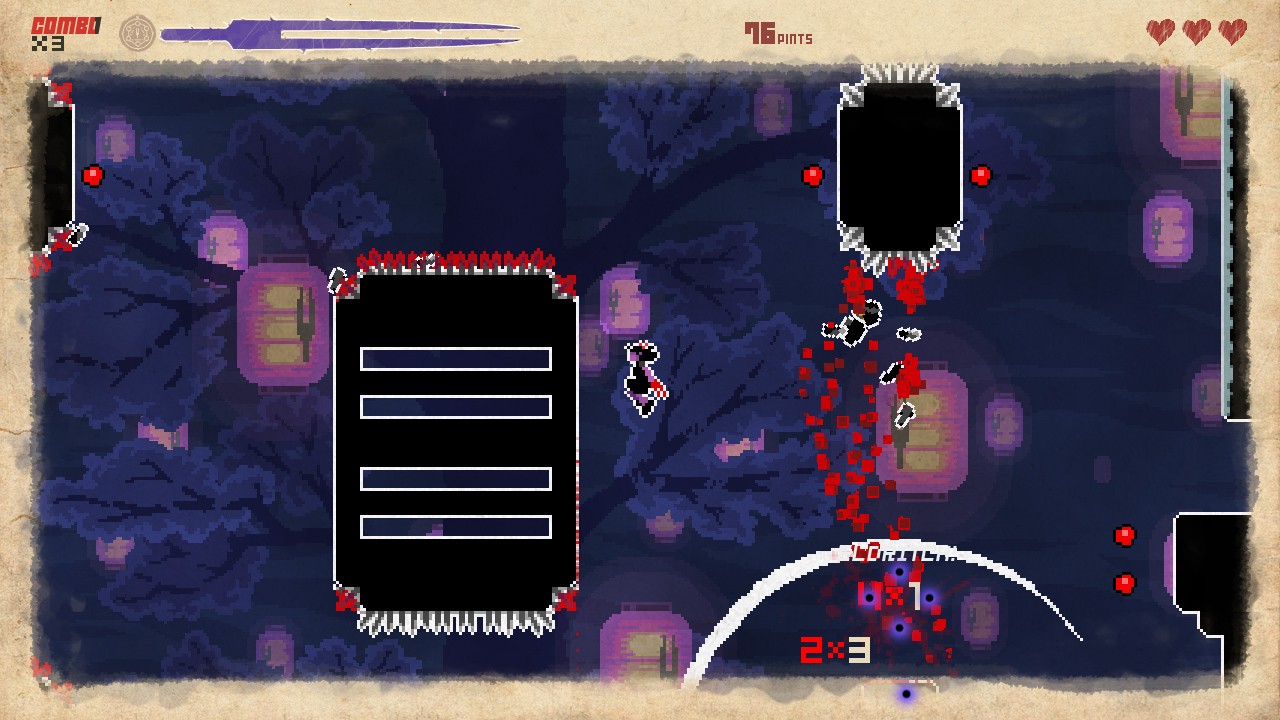 Once you’ve gotten the keys down, you need to realize that They Bleed Pixels wants you to die. It wants you to learn from your mistakes so you can make a cleaner, faster push through the next area. There are times where the way forward seems obvious and then you suddenly run up against an insurmountable obstacle, and you realize that it was going up or down that was the correct way to freedom. Exploration is a must in order to get all those random Grimoire pages, but a lot of it is just knowing what looks right and what looks hinky. Failure is second nature only to perseverance, and players are rewarded in a big way for sticking to it and figuring out how to get by. The end result is a carnage drenched dance of violence and grace, sending you through the chaos with the elegance of a murder ballerina to emerge at the end, drenched in blood and none of it your own. When you nail those moments of short jumps, dash stabs and being able to cultivate a no-hit succession of areas, it’s a gorgeous moment.

They Bleed Pixels is built for the gaming masochist, from the initial setup to the final areas and even more so in the bonus stages, which players should avoid at all costs if they value their sanity. Nothing will unlock early and spoil the story for you, but the couple of available levels is crafted with such a level of difficulty that you literally spawn into death on one of them, like you’re doing a custom Super Meat Boy level meant to make you quit video games. The execution of this project is so well done that I can’t help but admire the dedication to making me die without creating cheap deaths. You don’t get killed by some sudden trap that comes out of left field: you die because you made assumptions about your mortality and you were wrong. They Bleed Pixels is a ghoulish delight, and it could not have come to the Switch at a better time.

Death is such a natural part of this game it’s a wonder that there isn’t a button to just explode yourself when you’re feeling overwhelmed.