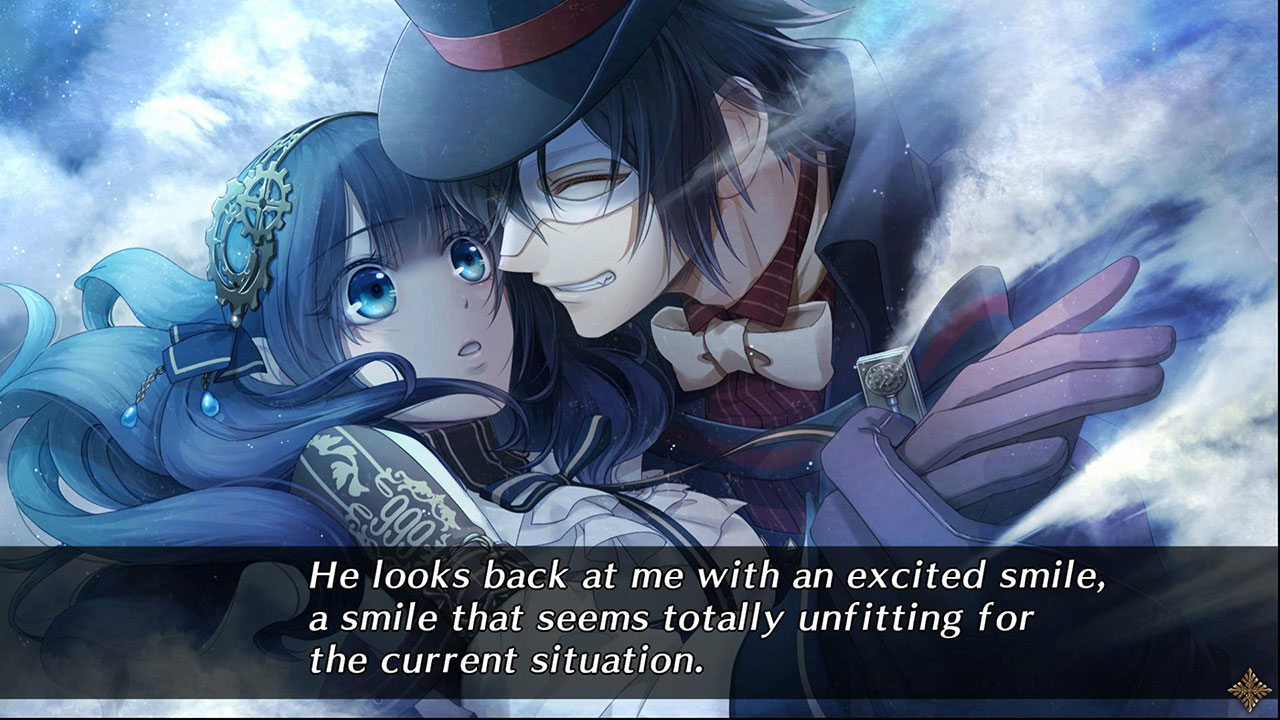 I’ve been having a rough go with otome games as of late. Maybe it’s just higher expectations, maybe it’s not being into dudes, maybe it’s just my odd choice to allow suspension of disbelief in cat girls falling in love with my character, but not cursed fox boys in a rock band. The part that bothers me the most about some of these games is that they just aren’t necessarily at the quality I would like them to be. Sure, maybe My Darling’s Embrace is a heavy amount of wish fulfilment for the male audience of the Steins;Gate franchise, but they paired that amount of romance paths with great humor, interesting dialogue and great character and background design. It almost feels like the devs who target women and men that want to chase anime boys phone in some of the effort because that’s where the bar is. Thankfully, that isn’t every developer, and it certainly isn’t the case for Otomate and Idea Factory. With Aksys Games at the publishing forefront, I’m delighted to have reviewed the fascinating and endearing tale of Cardia in Code: Realize ~Guardian of Rebirth~.

Cardia, our protagonist, is a woman who, for the last two years, has lived alone in a mansion on the outskirts of London. Cardia has a rare condition that makes her skin poisonous to almost everything it touches, both matter and living beings. Her father told her to stay here, to avoid contact with others and to never, under any circumstance, fall in love. Her father also mentioned that, someday, she would be the one to possibly save everyone. Still, Cardia doesn’t exactly have a timeline for that, so, when her solitary respite is interrupted by an intruder, she is scared but also a bit excited. That intruder turns out to be Arsene Lupin, who was seeking out something, but he didn’t know what. Together, the two flee the mansion, and Cardia begins a long and twisting journey to discover other companions, to find her father, and to find out the answers about her condition, her role in the future, and, more importantly, who she is.

Code: Realize is a long, long investment, so be ready for that. I know that we always mention that visual novels can be a bit of a trial, but I think that it’s often underestimated or simply overlooked because of certain factors. With Code: Realize, there was no compulsion to simply skip over the text or move ahead. Everything that was told, from important steampunk explanations of the world to slice-of-life moments like eating breakfast (there were more than a couple of breakfast scenes), the player is hanging on every word that spills forth from the river of text. The voice acting, as always, is superb, so players would do well to appreciate the efforts put in by the seiyu to give life to interesting literary interpretations, like Van Helsing, Frankenstein, and Barbicane. Also, if, like me, you took an immediate liking to Lupin and his rescue of Cardia, you need to play through the game a few times before you ever get his ending, which is such a goddamn tease but very understandable in the context of the game world and how it develops. Trying to stay spoiler free, but anyone who takes a few moments to play will understand quickly. 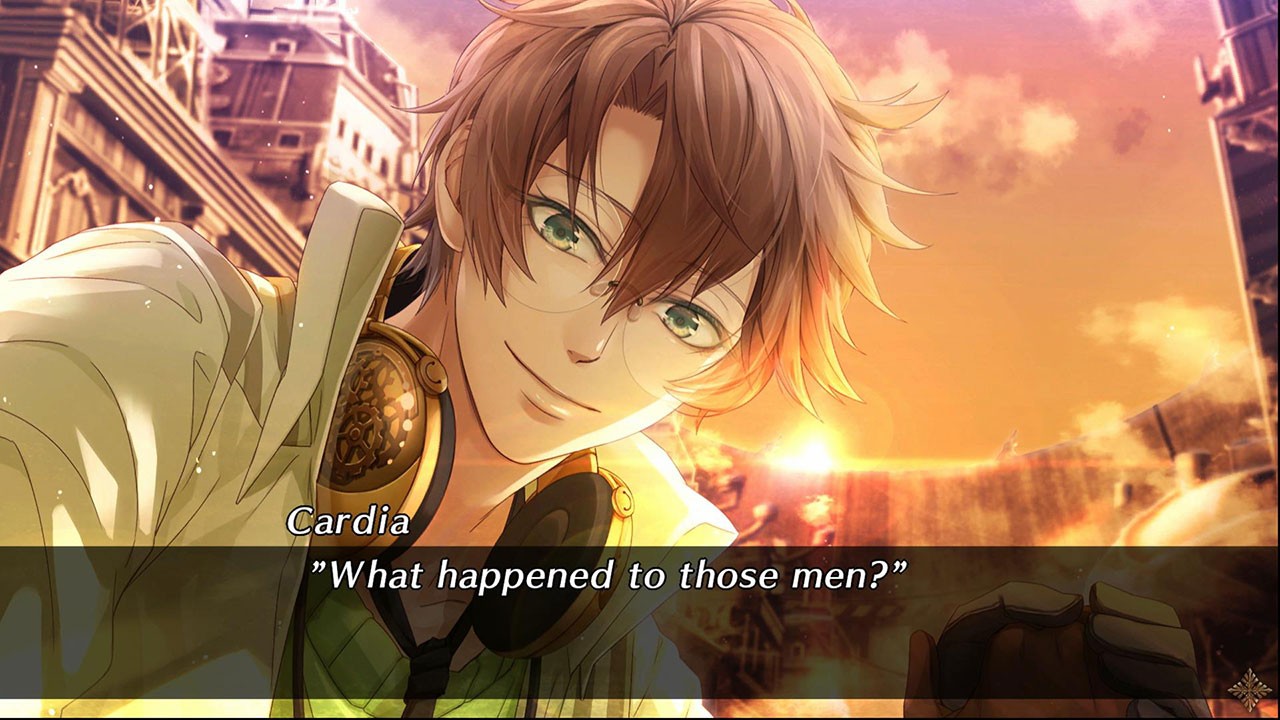 If you’ve never played a visual novel before, Code: Realize is a daunting but pretty great place to start. Most of the game is reading, like you would imagine, with plenty of helpful moments where red text will crop up and allow you to do further reading. With the environment being steampunk and the backdrop being historical England and a lot of the characters coming from actual or inspired events, a glossary of who’s who and what’s what is incredibly helpful. The number of choices in the game is a low ratio compared to how much reading you have to do, but a lot of them are pretty straightforward and involve you choosing which person you’re actively showing interest in, and which way you want the story to go with the man of your dreams. If you want the game to end quickly, you can “finish” the game in about fifteen minutes with a very obvious but wrong choice, but I recommend playing for the long form investment, because things get interesting.

You see, in most of these dating visual novels, no matter what side of the table you’re on, things are either too unified or too separate. That is to say, you either start off focused on one love and there’s no chance in hell to happen onto someone else, or you change your entire future with a single choice and you might not even realize it till the game peters out. With Code: Realize ~Guardian of Rebirth~, there comes a point where the story branches, and these branches lead to brand new adventures with the different potential interests that keep the game exciting. Instead of just seeing a different kissing CG at the conclusion, you get these whole, exciting pathway of heists and adventures and even different ways that Cardia might develop depending on what she chooses to do with her time and whom she takes a chance on. There are still bad endings ahead, sure, so your journey might abruptly end, but what a quest it is! 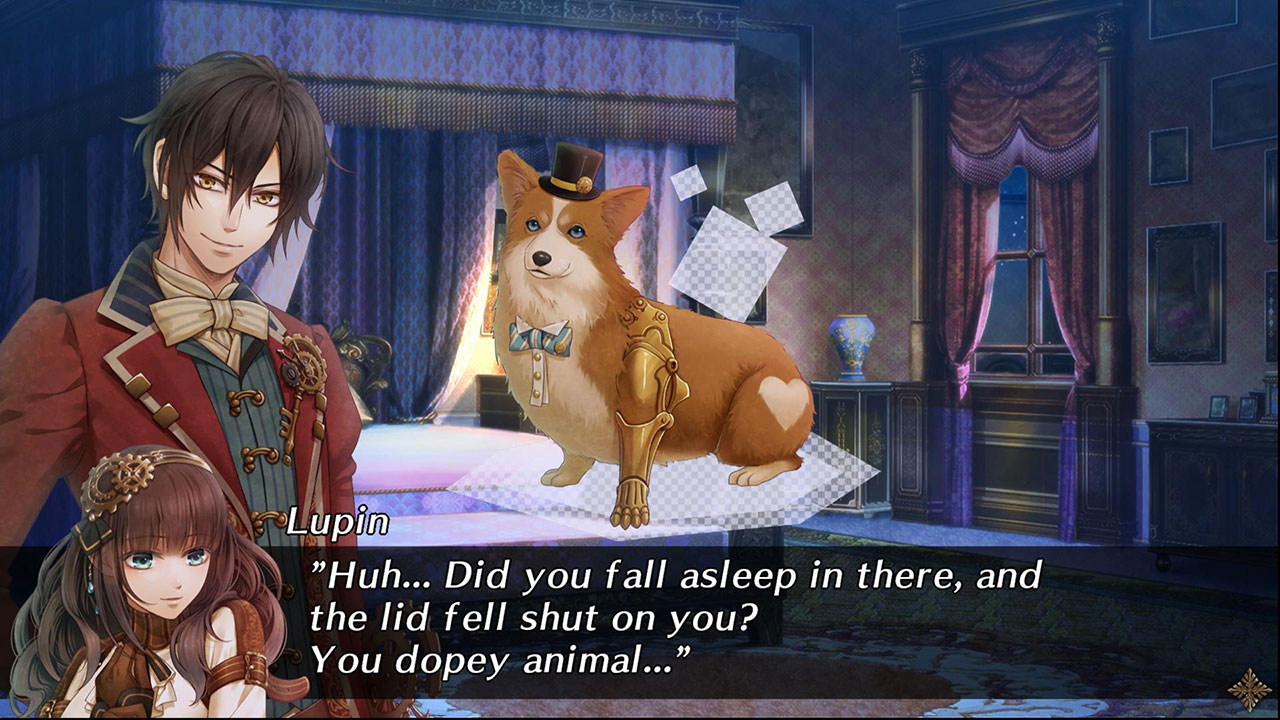 This is also one of those times where I’m strangely able to recommend Code: Realize to an audience of almost any age or background. Most of the time, I would never recommend a dating sim to anyone who isn’t specifically interesting in that sort of game, and a lot of the boy chasing games so far have felt very hollow on both the part of the men (gorgeous archetypes of anime tropes) and also the lead character (some Mary Sue who’s special but doesn’t see it herself). By amazing contrast, Cardia is straight up likeable as a standalone character who I don’t need to try and impress myself upon. She begins the game as very simple and almost demure, having followed her father’s wishes to remain hidden for the last couple birthdays, but, regardless of the path you take, you see this woman blossom and walk confidently in the sunshine and amongst people. She literally has toxic skin that could kill someone, but she doesn’t want to live her life in fear, and even finds a new outfit that better shows her as a person and a human being. It’s like a movie moment to see and cheer the female lead finally understand her own value and worth, and it’s something that, sadly, feels very absent in several otome games (or at least the ones that’ve come to the Switch so far).

Aesthetically, Code: Realize is a gemstone and a success. The score is a dynamic, sweeping piece that incorporates different themes for each of the would-be beaus, allowing Cardia to be drawn into a world where the score demands adventure, intelligent repoise or gothic (true gothic) ideology. Besides listening to the dulcet tones of the speakers, having such great music transfix your attention makes it a full bodied experience. Additionally, all the wonderful tropes of steampunk crop up throughout, so be ready for top hats, brass earmuffs, goggles and near-magical design to exist throughout. Plus, the Victorian backdrop allows for some truly beautiful buildings and architecture to be a part of Cardia’s journey. OH, and thank you, so much, for not voicing Cardia, Otomate. For some reason, having her be read, not spoken, and letting her voice create its own timbre in my mind made for a much better journey overall, especially if she was being a bit thick or coy with a certain conversation with a certain character.

My only note that I would like to stress to potential customers is to get the physical edition of this game and not the digital. Don’t get me wrong: I have the digital, runs like a dream, install size isn’t too big and I’ve had zero performance issues. But Code: Realize is a game that I hope other people become curious about. Someday, my daughter, who loves history and historic figures, might want to see what the fuss with visual novels is about, and I would happily point this game out to her. Having it physical means having it on shelves to identify and say “This is a great example of what a visual novel can be,” and I might even lend it out to someone. There are fantastic VNs from all different angles, but this one just feels all encompassing in a way that almost makes me hopeful. I’m really glad I had a chance to play Code: Realize, and I hope others feel the same.

A world where a woman can learn more about herself, discover facets of history and life while exploring actual romance and not just wish fulfilment? Sign me up.