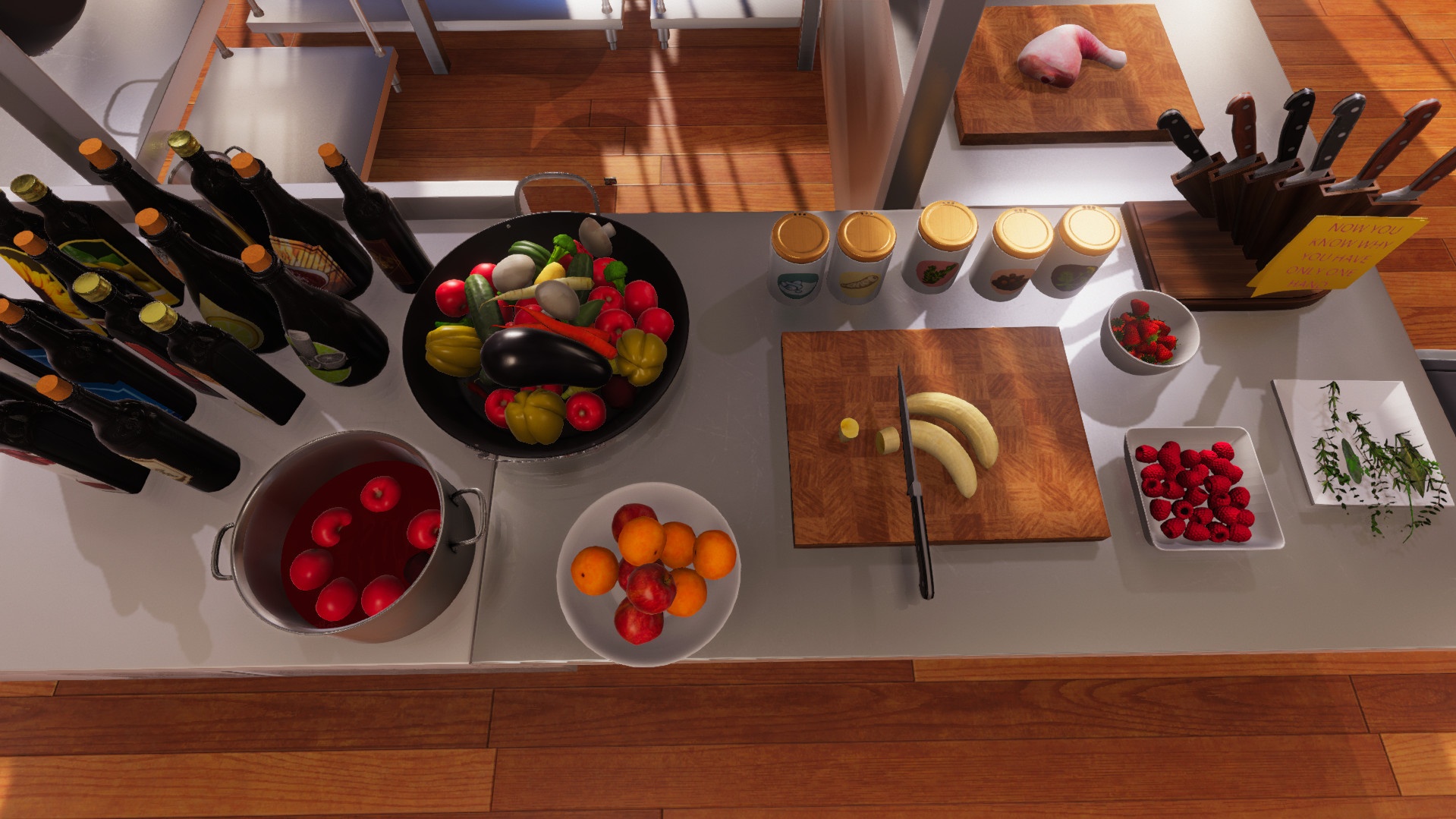 I’ve never been into simulators, but when I got the chance of playing a cooking simulator, I figured it was worth the shot. After all, who doesn’t enjoy watching tasty food getting made? What could possibly go wrong? Well, little did I know that a lot could actually go wrong, especially the fact that I might not be as gifted in the art of cooking as I initially thought I was.

Cooking Simulator is being developed by Big Cheese Studio, and published by PlayWay, whom a lot of people might know simply due to the fact that they tend to publish all sorts of simulators. In and of itself, Cooking Simulator is, to nobody’s surprise, a game where you get to play as the chef of a random restaurant, as you attempt to make a name for yourself and elevate the fame and prestige of your kitchen.

The version of the game that I’ve had the chance to play is only a limited demo, which supposedly only contains about 30% of the ingredients and dishes that you’ll find on release. Plus, it only lets you access courses from the first three levels of fame. Currently there is no definitive release date yet, but from what I’ve seen, I believe that the game is currently in the phase of bug squashing and polishing, as actual game content seems to be pretty settled, especially since the developers have already disclosed an extensive list of what you can expect on the final version. 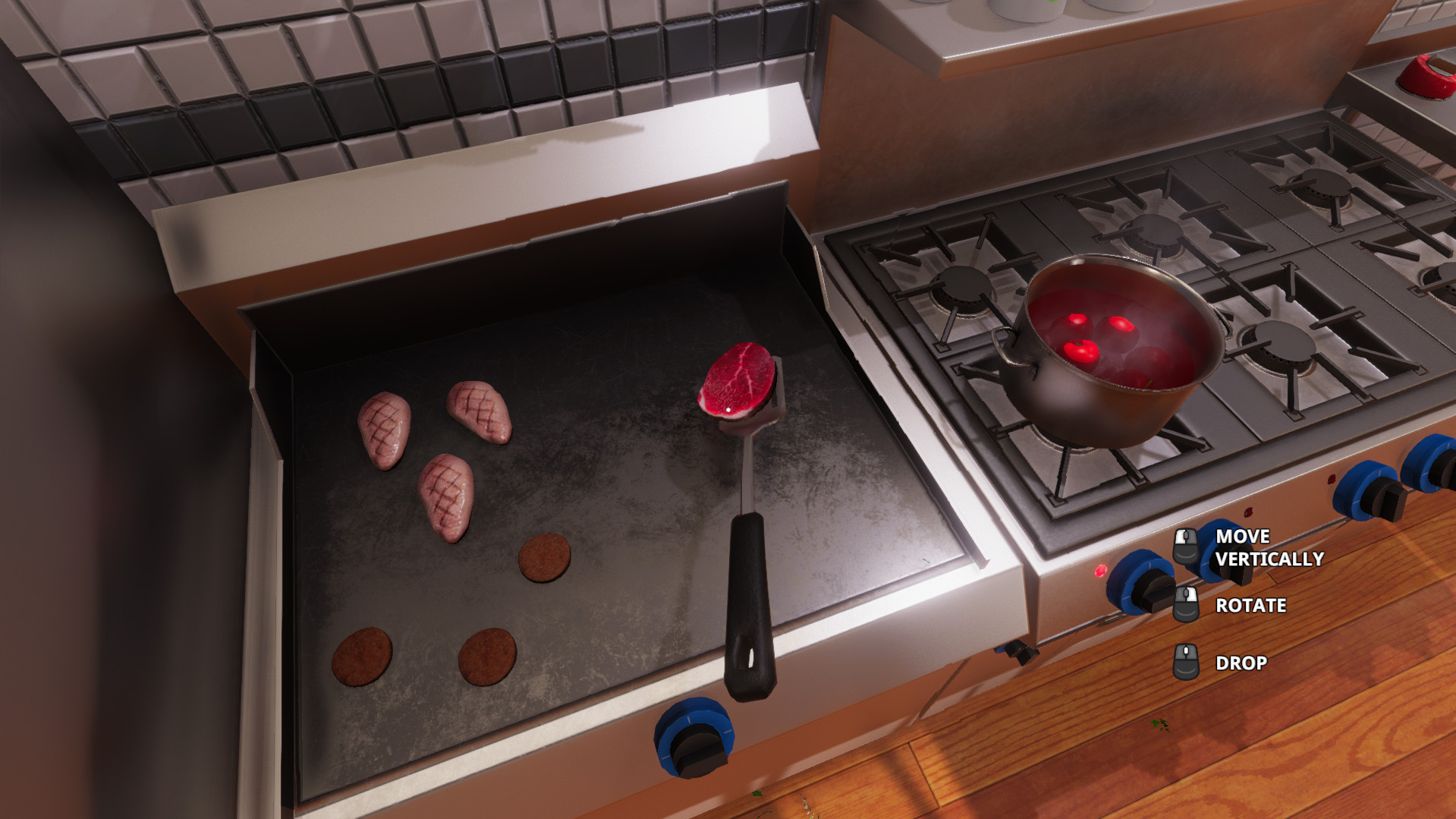 Once the game launches, you can expect over 60 different courses that you’ll be able to unlock, as well as more than 120 ingredients and products that you’ll be able to get your hands on. As of right now, I’ve had the chance to play a little bit of the Career Mode and mess around in Sandbox mode. The former plays out in a more streamlined fashion, where you’ll start with very little and you’ll have to slowly prepare basic dishes and earn enough reputation to level up your fame level, as well as cash to keep on buying new ingredients, utensils, and potentially replacements in case anything goes wrong. Then there’s the sandbox mode where you have unlimited money, so you can just cook whatever you like without the fear of going bankrupt, and practice different courses as much as you want until you’ve mastered the culinary arts, unless you’re a lost cause like me.

In terms of gameplay, Cooking Simulator is one of a kind. While there have certainly been numerous games that have made their own attempt to recreate the day-to-day hell of running a kitchen, I think this might very well be one of the most compelling ones, albeit somewhat frustrating. The developers have clearly nailed the gameplay systems, with you having to purchase every single ingredient and utensil that you use, which forces you to try to be as precise as you can when you’re adding salt or oil so that you don’t run out and have to go and quickly buy another package. However, the game makes use of a full physics engine, which makes it so that things interact in a rather interesting way.

Things like cutting lemons or pouring soup from a pot into a deep plate are handled just like in real life. There’s this meticulous process where you have to carefully align the knife and slice, which is really cool, but things like putting ingredients into a put or a tray, or even serving soup can be quite frustrating. Things often fall out of baking trays or plates for no apparent reason, and pouring liquids into containers is rather difficult, and most often than not I would pour more than I should, or I would spill most of what I’ve cooked all over the floor. I understand that the game was made to be handled this way, I just can’t figure out if this was done in order to make it silly, almost like in a Surgeon Simulator manner, or if it was done in an attempt to make it as realistic as possible. If the latter is the case, I think it just makes the game harder than it should be, and it only hinders the players’ enjoyment. At least that’s how I felt sometimes. 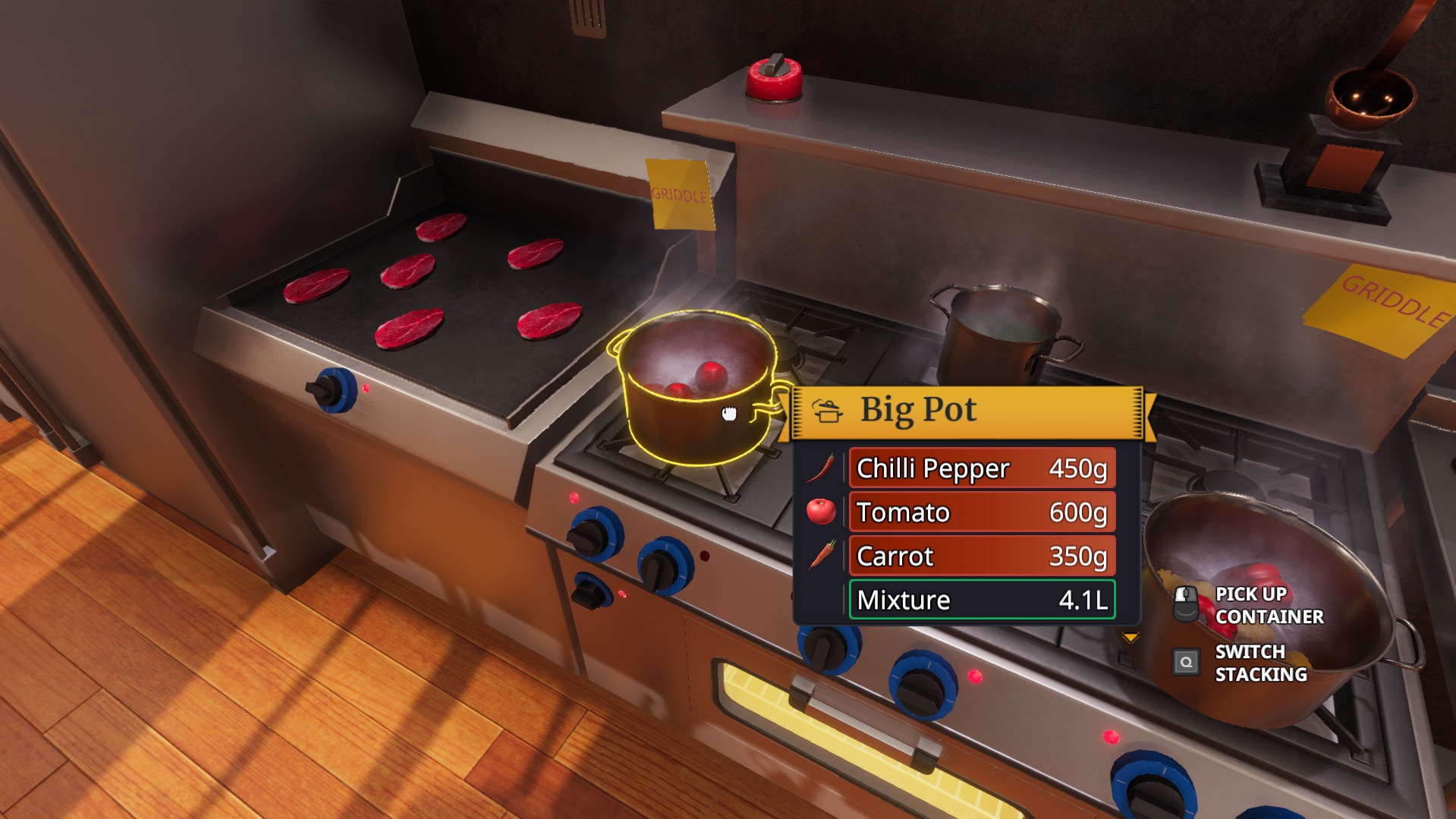 There was this time where I got locked in a scene where you use the blender to blend the ingredients inside a big pot. The game simply wouldn’t allow me to go back, nor could I open the game menu. My only option was to close the game by force and restart the day. The game also randomly makes my controller my default controlling method, which makes it so that I’m unable to play the game with keyboard and mouse unless I use the controller to do something and then immediately switch back. If you don’t mind the way physics are handled, the game works fine for the most part, but there are some awkward issues here and there. For instance, one day I failed to deliver a dish, and on the next day it was still there, hot and ready to serve to someone else. How did some piece of salmon managed to remain hot overnight and got me almost a perfect rating from the customer who ate it? It just doesn’t make sense, especially for a game that calls itself a simulator. Still, the game isn’t out yet, so we can hope that these little issues will be ironed out before release.

Despite these issues that I have with the game, mainly the way it handles physics, the whole kitchen and cooking dynamics are really captivating. From the moment the restaurant opens, you’ll start receiving orders and quickly open up recipes on these huge screens located in the middle of the room, which allow you to keep track of your progress within each specific dish. From there on, you grab whatever ingredients you need and throw them into a pan, cooking tray, pot, or whatever is needed for them to get cooked. Some knife action and seasoning is also often involved, and you have to follow each recipe to the letter, carefully using specific amounts of ingredients in grams if you really want to get each dish done perfectly. Once it’s done, you send it out and the customer provides you with feedback, where they’ll mention if you used too much of an ingredient, or if you used a bad cutting when slicing something. Ultimately this affects how much you’ll make at the end of the day, including your tip, and if it’s enough to cover your daily expenses.

At the end of the day, while the game mechanics are quite compelling, unfortunately the controls only seem to get in the way of the player, which can result in an unpleasant experience. At least that’s how I feel anyway. In any case, I’m looking forward to seeing in what shape the game will actually come out once it eventually releases. If you’ve always wanted to be a chef but lacked the time or the resources to become one, then it might be worth for you to keep an eye out Cooking Simulator.