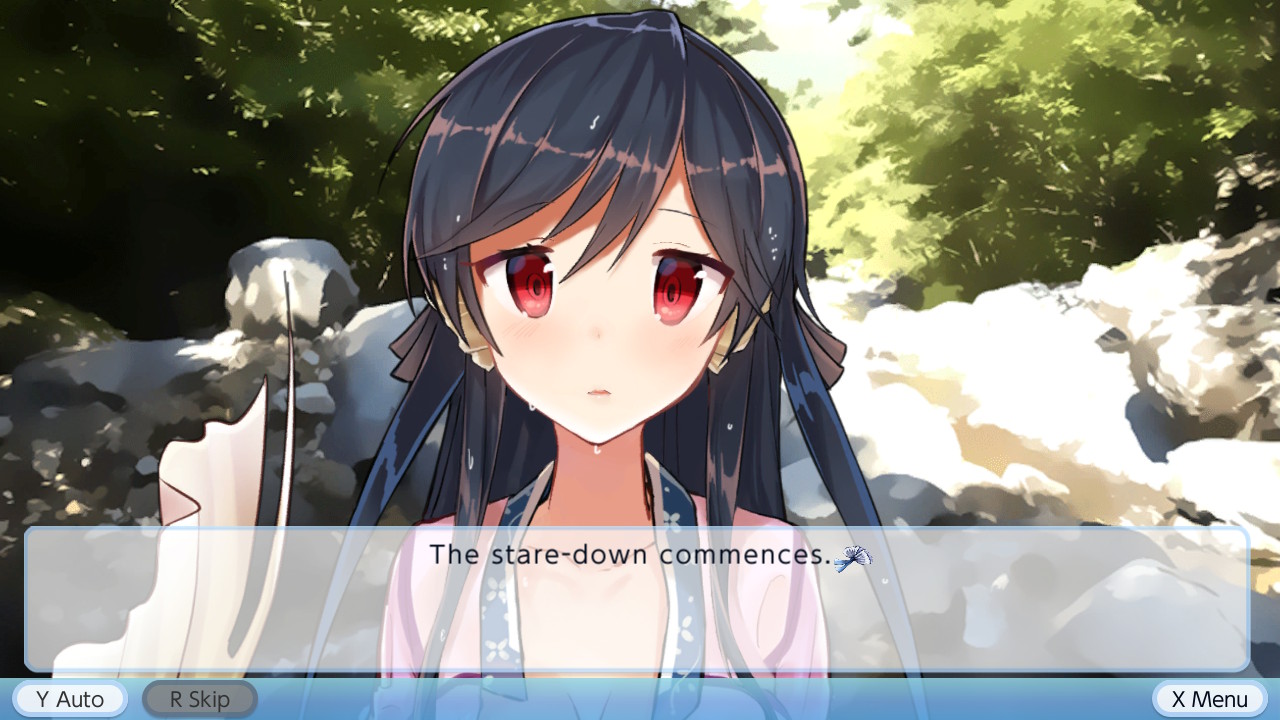 I don’t pretend to be some kind of magically enlightened individual. As much as I enjoy stories about balanced worlds, fair treatment of others and a culturally woke atmosphere, I also see the merit and the enjoyment about very primal and baser games. Shooting stuff, hunting stuff, and, sure, leering at stuff. There’s been a reason that I’ve been one of the few to touch titles for review that other reviewers might shy from, and I don’t take any shame in that. Gal*Gun 2, Senran Kagura, the NekoPara series…those are in my wheelhouse because someone’s gotta, and I can do it without needing to scrub myself with steel wool afterwards. Still, for some of these games, you need to figure there’ll be a bit of balance and give and take when it comes to the Switch. You know that a game can only go so far without crossing a line, and the secret is to have plenty of endearing or interesting qualities on the other side of that. With a title like My Girlfriend is a Mermaid?!, I can see what they were trying to accomplish, and, unfortunately, it just doesn’t quite live up to the fins it wants to fill.

The story is incredibly bizarre, and not just because mermaids are a thing. You play Hiroto, a young dude who definitely has glasses (really catering towards a specific clientele here) who, one summer, is overcome with the urge to return to his hometown in rural Japan, because who doesn’t dream of escaping a small town and then coming back when you’re in your early 20s? He gets back to his small village and, as young men want to do, climbs up a waterfall to see what’s happening, and, surprise, meets a mermaid. Not just any mermaid: a childhood friend of his, named Ion, who is now a mermaid without any real explanation nor preamble. It raises a lot of questions off the bat and addresses none of them for a surprisingly long amount of time as you now need to get the mermaid back to your house, and then into the village, and then just sort of bring her around with you everywhere. Then you meet another mermaid, Petako, who’s like Dory if Dory was a moe character, and a bipolar priestess, Rin, who might have the answers if she can get her head on straight. You sort of find out that Ion is the granddaughter of a shaman, and there might be a curse or a legend or something, and the long and the short of it is you might end up falling in love with one of the people I’ve just mentioned. Surprise! It’s a visual novel but with a dating sim undertone. 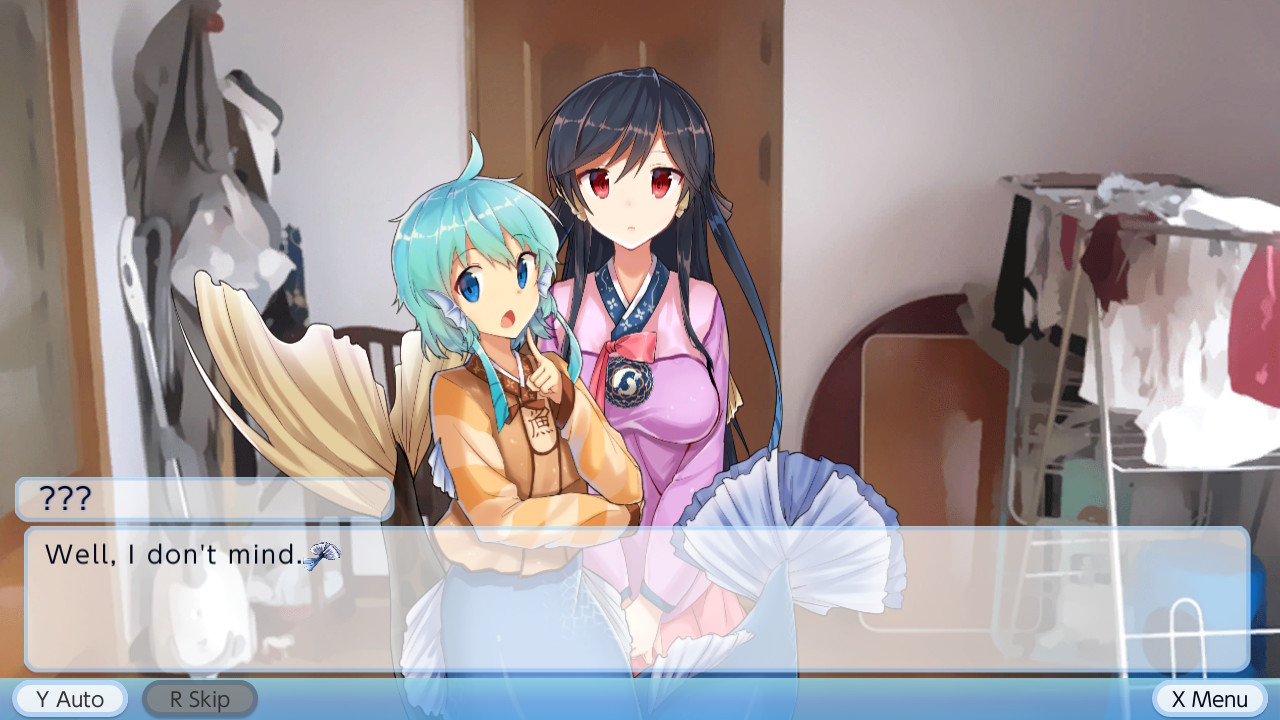 It’s important to stop here and mention that, while My Girlfriend is a Mermaid?! is a project whose localization sprang from crowdfunding, the game itself was very popular on mobile to begin with. Being a grand title in both Korean and Japanese, you’d naturally have questions, and I sadly don’t have great, fulfilling answers. TALESshop (the Korean creator) and COSEN (the Japanese distributor) partnered up with Sekai Project (an English publisher/professional crowdfunder) to bring this game over in order to get more funds, and I can sort of see how the logic progressed. The problem is that this game works well in East Asian countries as a mobile title because it ticks a lot of boxes that make dating sims/visual novels work on smartphones. It’s incredibly text heavy, the artwork is animated but not heavily, and there’s plenty to read and decide, but not necessarily interact with. Also, there’s a different dynamic to dating sims on the phone, because you need to understand that players might be sacrificing data to get more of the game, plus need to be able to toggle away at a moment’s notice. These factors and more contribute to why getting through the initial moments of My Girlfriend is a Mermaid?! is a goddamn CHORE.

Firstly, Hiroto is a stupid, pretentious, verbose and unlikable protagonist. I’m trying to figure out if many dating sim players actually identify with this sort of person, or if he’s purposely made to be unlikable so others can say what they would do differently. The opening of the game has these lengthy passages about why having a childhood friend is a perk for your life, but also conflicting because you can’t find any sanctuary in a girl who was a friend that eventually blossoms into a woman. This is all while talking at length about the boobs on your childhood friend, which, I get it, she has boobs. She also has a fish tail and has been living in a waterfall basin, which I feel like is the more pressing thing to address. Hiroto also makes a point to comment on EVERYTHING that has boobs, including Petako, who is clearly a young, naive, and shouldn’t-be-sexualized character because, what the hell. The inner monologue moments of Hiroto never get better, as he’s constantly stuck in his own thoughts, trying to piece things together and act like he’s above whatever is happening before him. This also distracts you from the fact that Ion, when you first encounter her, appears to have the speech capabilities of a young child, which is deeply concerning. Things get better, but the first solid hour or so of gameplay is a rawhide-in-the-mouth sort of experience where you just need to grin and bear it to get to where the game actually opens up.

In fact, this is a pleasant change in that regard to recent titles that I’ve played on the Switch. Similar to Nightshade, your choices in My Girlfriend is a Mermaid?! seriously change the tone and direction of the story, lending a lot more gravity to the smaller decisions you make. Even early on, making Ion try and hop herself into town versus offering to carry her, can open or close one of the multiple endings available towards the end of the game. The happy endings are somewhere between bittersweet and truly affectionate, whereas the bad endings range from you being the bad ending to some off-screen horror being the much worse fate. There’s even a “True Ending,” meaning what the directors intended to be the final pathway, and I guess it’s alright. Truth be told, by the end of the game, I really didn’t like Rin (like, at all), so I begrudgingly accepted that maybe Rin deserved to be happy as well. You’re not going to end up accidentally running away with Petako or anything like that, so don’t expect a wild and wacky world of potential pairings to spring forward. You want to make Ion happy and Hiroto happy, and that’s just so hard when I sincerely wish Hiroto would go die in a ditch. 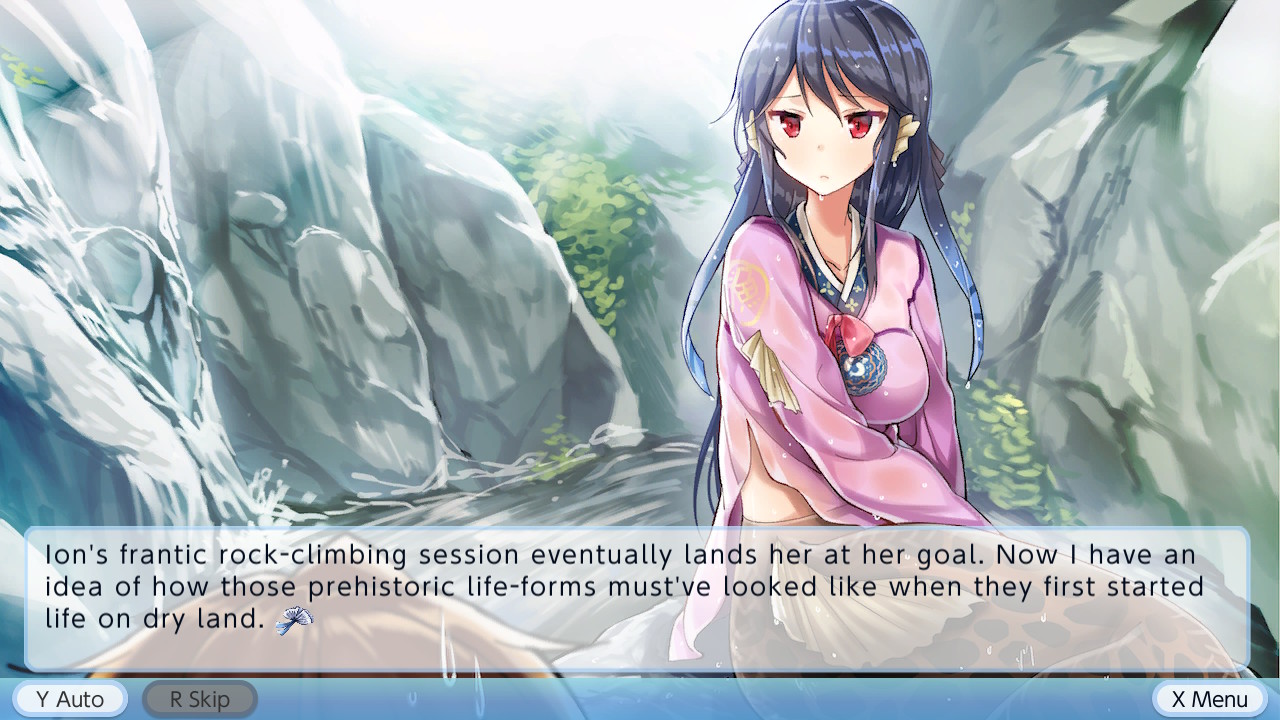 Still, there’s plenty that keeps the game going. The story is interesting enough, as we intermix slice-of-life with a bit of mystical fantasy and some odd undercurrents regarding old gods. The voice acting is quite good, but I have to say there’s some kind of latency issue where the characters will keep talking even if I’ve advanced the text. I can read the fact that Ion sort of murmurs something without needing to wait for her to finish uttering the sound, but then progressing before she “speaks” means hearing it a screen or two later. The art style for the different characters is memorable, but dammit if Ion doesn’t spend every frame bouncing in place to make her breasts keep jiggling. It’s only distracting because, if someone can’t hold still long enough to talk to me for a few minutes, I don’t know if I want to save them. Lastly, there’s not a huge variety in the different landscapes and backdrops where Hiroto hangs out, but they do a good job of creating the world of the town, the surrounding nature, and the creepy temple where too much time passes.

If you’re into visual novels where the protagonist is sort of an awful person but hangs out with relatively likable people, then My Girlfriend is a Mermaid?! isn’t the worst choice for where your gaming is heading next. Hell, in terms of getting all the different endings and seeing how drastically the story changes, it’s a fun enough investment in time, plus you can get a chance to sample all the different voice acting in multiple languages. Then you get to view the endings at any time through the Extras if you want to remember the good and bad memories. Personally, though, when the protagonist is this much of a jagoff, I find myself wishing ill upon him, so I doubt I’ll ever be swimming upstream to check this out again.

My Girlfriend is a Mermaid!? Review