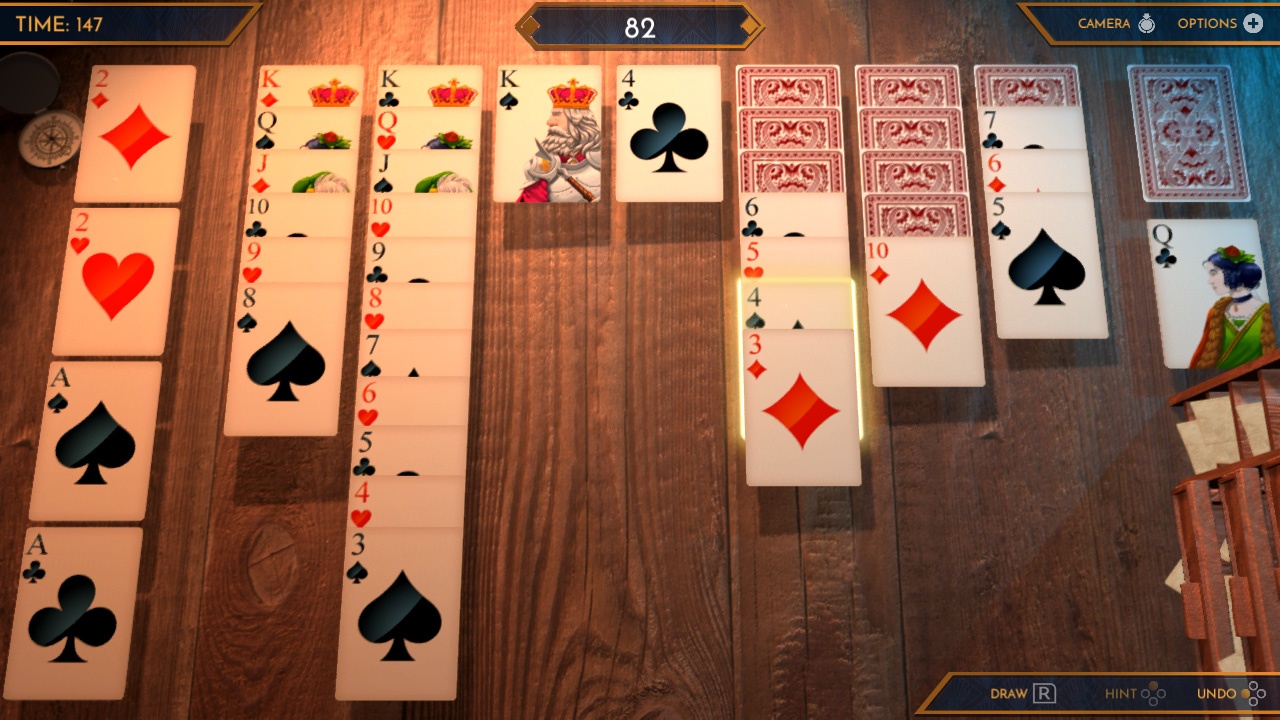 There aren’t any touchscreen controls.

Seriously, I feel like I need to do my duty and take a full look at Baltoro Games’ entry to the Switch with Klondike Solitaire, but this is already an incredibly tenuous line to walk. Firstly, it’s a card game on a game console, which is a wild swing to make if it’s not something proprietary, like a TCG or CCG or any kind of deck building phenomenon. Secondly, it’s a trump-based game, which means that, in theory, you can pick up a deck of cards from almost any convenience store, dollar mart or gas station and be ready to play this game and more, which, naturally, you can only play Solitaire here. Lastly, it’s nine dollars. A price doesn’t often matter, but you usually purchase digital copies of real world games to either save money, save space or save time. I suppose you’re saving space because you’re not attempting to bring a deck of Bicycle with you along with your Switch, but then you’re also saying “I only want to play traditional solitaire in terms of card games, and I will happily pay extra to grab another title like Poker, Spit or Go Fish.” It’s a weird standpoint to take from the beginning, and then you have to build from there.

I will absolutely say that Baltoro Games did their best to build the aesthetic world of Klondike Solitaire. There are a variety of card backing and faces that you can unlock through multiple successful completions of games. You’re able to mix and match any way that you want, and there are achievements that can be unlocked through attempting different combinations and variances. The cards look really good, with a wide range of starkly simple and recognizable designs to ones that are even more avant garde and even a bit impressionistic. This is coupled with the ability to also unlock different table types, getting certain felts and woods through game wins to make the environment where you lay your cards to be more special and exciting. I guess that’s something that I never thought of: someone might be so in love with the idea of classic solitaire, but want to make sure their perception of playing is continually changing to make it exciting and new. I like solitaire as much as the next person who’s been stuck at a computer and forced to pretend to work, but I guess it’s never occurred to me that simply having constantly different decks, layouts and faces might make life that much more awesome. 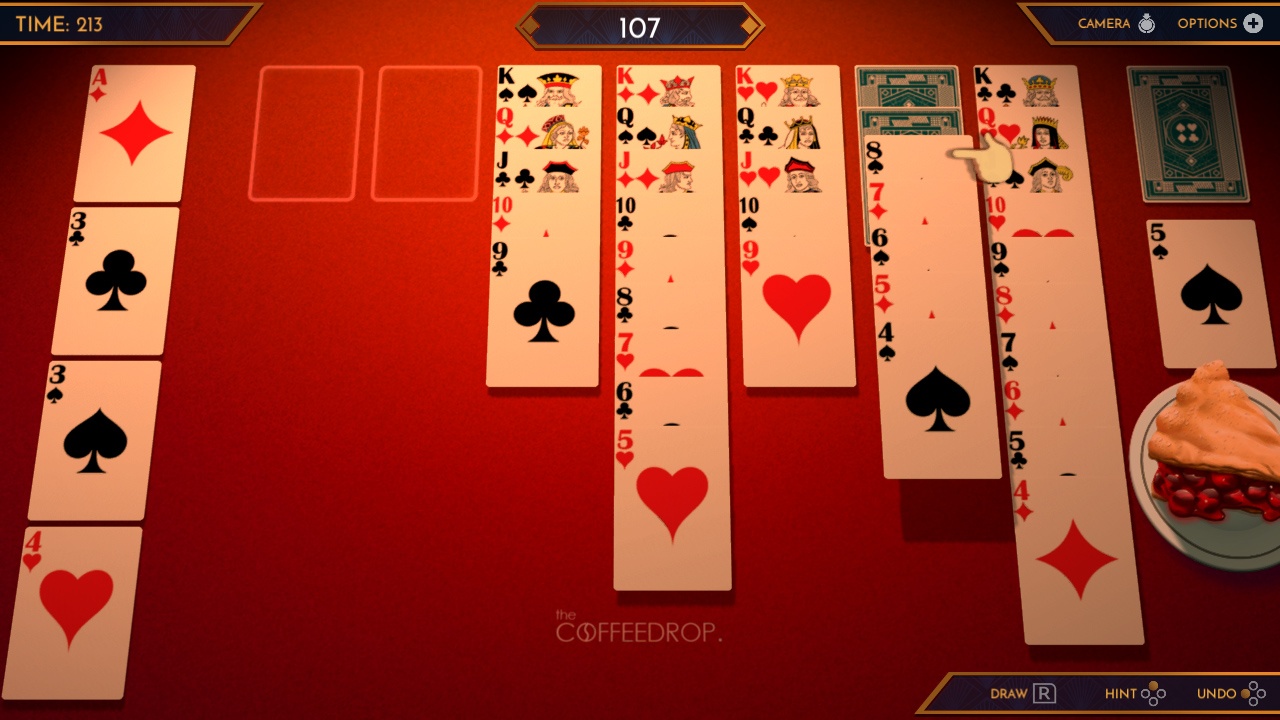 And the music is seriously fantastic. Unlike the traditional elevator jazz that usually ends up accompanying the card game games, Klondike Solitaire has a full range of (again) unlockable tunes that better suit the feeling and mood of whoever is moving around the aces. One of the early tracks has this incredibly smooth and almost funky vibe to it that creates a real sense of enjoyment in the game, and, honest to God, it’s such a great step up from the days of PHYSICAL CONTACT games. I need to be serious that, if it weren’t for this massive hurdle that cropped up in terms of execution, Klondike Solitaire might be a recommended game for the Switch. There was thought and attention put in to making it a really great card game, and they did as much as they could in terms of shaping the world without overhauling the game or changing the rules or doing something really crazy. If this was a solitaire game where the cards had deep, gangland grudges against each other or forbidden romances, that would be interesting but also distinctly not solitaire. They kept the concept pure and really tried to play to the idea of putting solitaire up on the television.

The controls for the button playstyle are alright, can’t overlook that. You push a button, pick up the card(s), move them to where you want, and push the button again to drop them down. However, if you’re in an incorrect spot for whatever reason, the cards don’t just bounce back to their original position: you hang onto them until you put them down correctly. You have a couple of different variances in how the cards and your interactions work: you can see the whole card stack moving along with your cursor, or you can just see a glowing outline of a phantom card to indicate where you are and where you’re going. I recommend the outline style, because that way you’re less aware of how much time you’re wasting pushing the joystick multiple times to the left or the right in order to move a card into a certain spot instead of dragging your finger there. 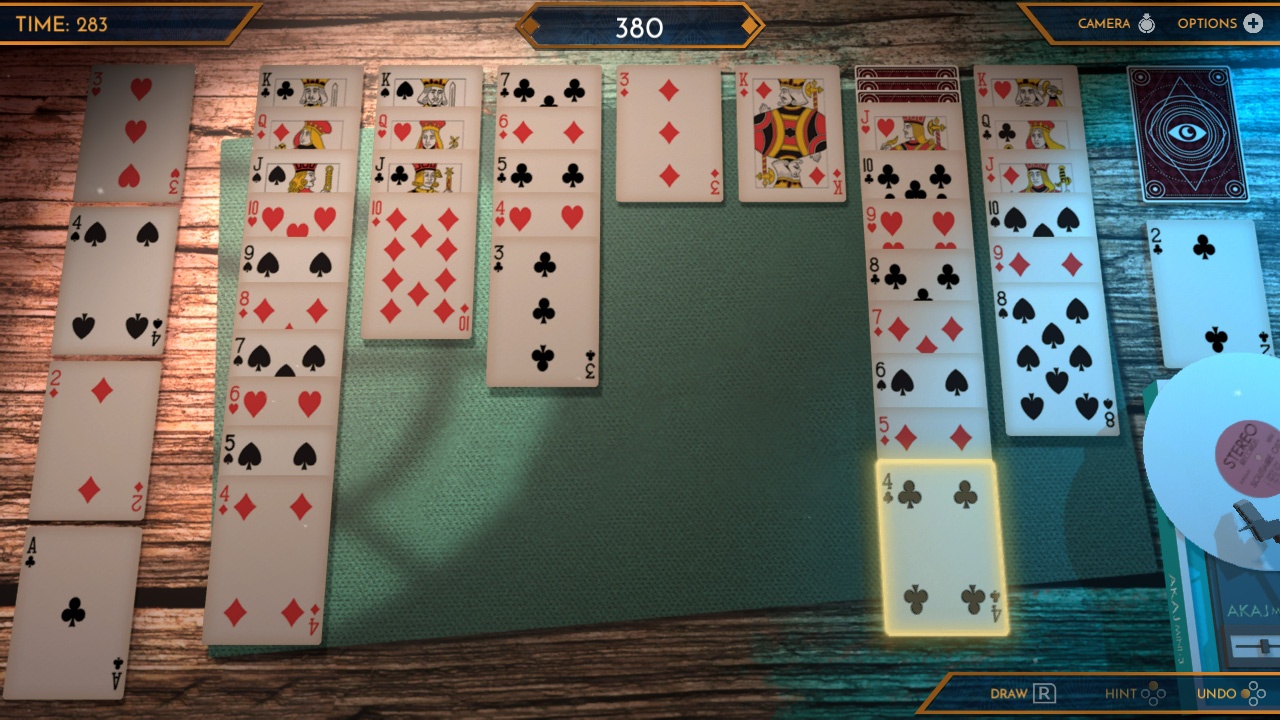 Sorry, it still circles back to this one flaw that’s come up a few times in card games for the Switch. There’s a touchscreen. It’s one of the paramount cornerstones that makes the Switch a unique console/handheld hybrid. It makes for setting up a game while holding the JoyCons possible. It makes for all those damn mobile game ports to come over and be somewhat competent even if the button controls are janky. But, for whatever reason, Baltoro Games, like so many developers before them, have actively chosen not to put in the work and figure out how to make touchscreen play a reality for a solitaire game. Never mind that every two bit grinder who puts things out on the Play Store or the App Store does this without a second thought, it just isn’t even an option here. And maybe, once in a while, I’d be down for playing Solitaire up on the big screen to show my friends and family how awesome I am at clearing a game while doing THREE card draws instead of one, but 99.9% of the time I just want to sit on my couch, letting reruns of Psyche play on the TV, and do some solitaire. That’s just way, way too frustrating to do with the buttons and the pressing and the clicking and whatnot.

If you’re super hard up for a good solitaire game, Klondike Solitaire does some wonderful things in terms of presentation, incentivization to keep playing and a fairly reasonable price with great (but not unexpected) performance. But, as for someone who likes to relax with a card game, this one is just a notch above Spider Solitaire and still far, far down the list from carrying a pack of cards in my backpack.

Yep, it’s solitaire, and it solitaires well enough, but there is just nothing to really excite or surprise me in this traditional card game port.