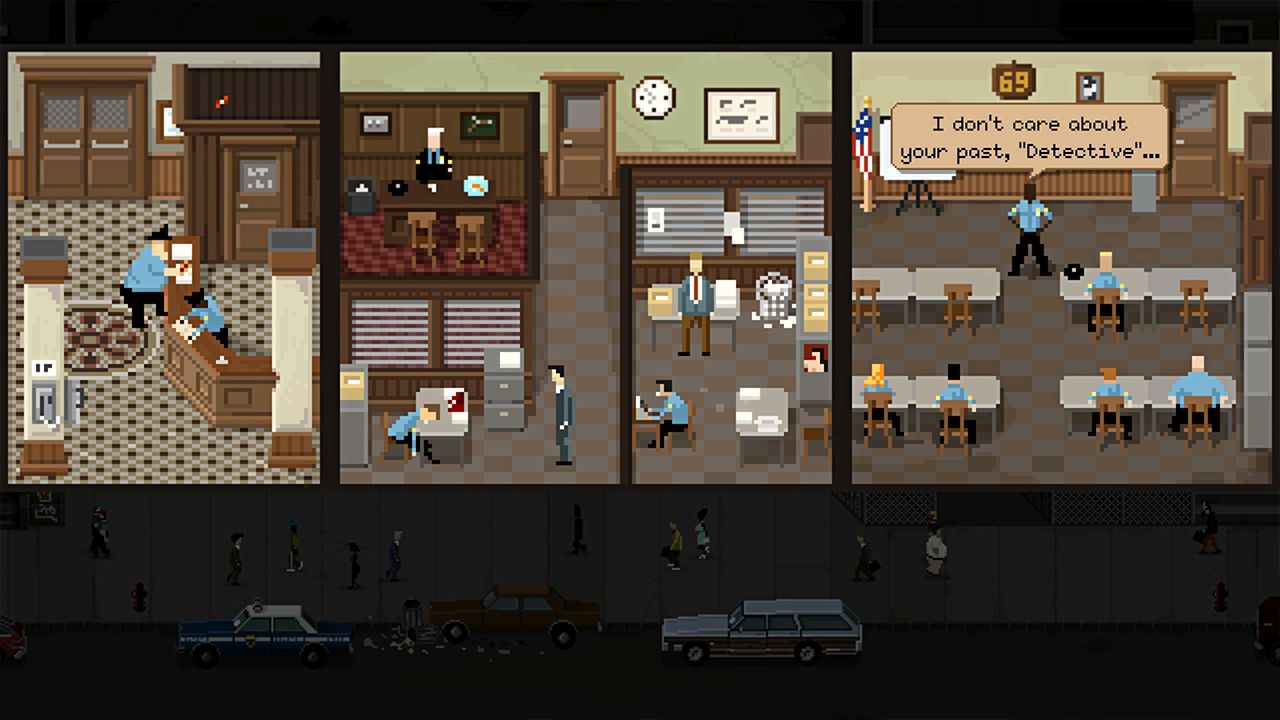 When I played This Is The Police a few moons ago, there was a lot about the game and concept that I liked. The undercurrent of corruption, crime and moral flagging were something that kept the story intriguing, and the choices you had to make made for compelling, life-or-death consequences. But This Is The Police was grim throughout, with more of a noir tone than anything else, and, well, the events were still a bit removed. As cool as watching the crimes over the CB go down were, it removed an element of excitement about from a more primal standpoint. Pixel Crow and 11 Bit Studios must have felt the same, because their time limited action/adventure game, Beat Cop, strikes some of the best notes that you could imagine.

The year is 1986, the place is New York, and you are Jack Kelly, disgraced former detective who’s been busted down to being a “beat cop:” one police officer in charge of a city street in Brooklyn that becomes your world. On the surface, things look simple for your new responsibilities. You’re supposed to write parking tickets, deal with reports and problems from the citizens of your beat, and know when to call in the big guns from the dispatch when things go above your paygrade. But there’s a lot happening underneath that Jack has to contend with. For one, he’s been framed for a series of crimes to lose his original position, including theft and potentially murder. His ex-wife is up his ass about alimony and that kind of cash is hard to come by from expired parking meters. And, like all other blocks in New York, Jack’s has a small warfare going on between rival gangs of The Crew and The Mafia. Jack needs to learn, fast, that there’s a lot of hardship living in black and white, and that finding the gray areas in between will be how he survives this job, clears his name, and maybe makes some money on the side so he can justify this whole damn ordeal.

In theory, Beat Cop is a simple game if you try and do things in a simple way. Each day, you get dropped off by your fellow officers at your beat after the chief gives you the target objective for the day. Most of the time, you need to write a certain number of tickets before day’s end, and they gotta be legit, otherwise you need to deal with the driver and the department chewing you out. However, you can’t just put your head down and do meter maid simulator, because that would be boring as hell. Instead, you have a good number of establishments, from a very stereotypical Italian restaurant to a seedy porn corner and every other kind of shop that you’d picture in 1980s New York. You have to frequent these places, check in with the owners and patrons, make sure everything is running smoothly. The gangs will check in and check up with you to make sure you’re cool, though a very early decision in the game will automatically put one on your side and one against you (though you can win minds and hearts over time). Helping with minor events, like finding someone’s cat or delivering a “package” will build your trust with the people, as well as line your pockets for necessary expenses. After all, besides doling out money to that leech every month, you gotta make sure you’re eating: food helps keep your energy up, and you’ll need it for everything you need to do. 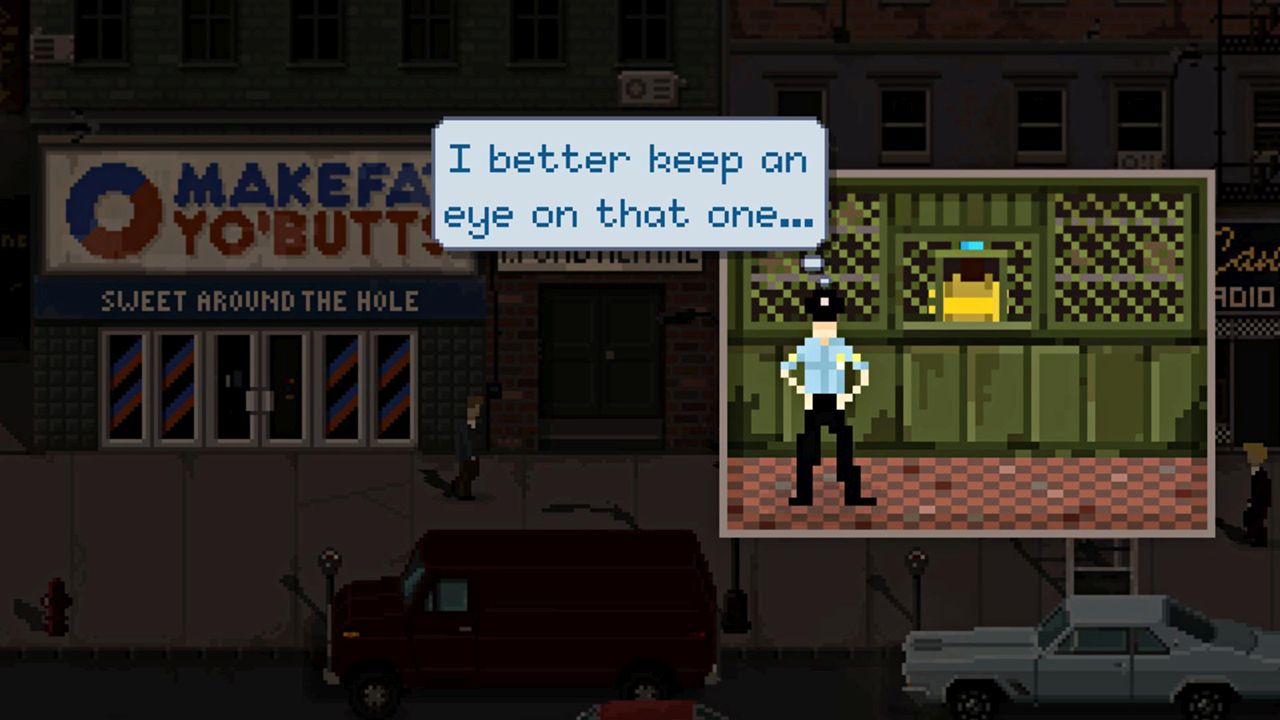 Once again, this is a game that takes place on a city street, and Beat Cop expects you to keep moving and keep hustling in order to keep things interesting. You need to get to those cars the second the meters expire, and potentially call in the tow truck as quickly as possible: you never know when you need that fire hydrant free to put out someone threatening to light themselves on fire. Sometimes you’ll hear about a dead body in an alley that’s on the other side of the beat and you gotta haul yourself to get there and start questioning people before others show up to rubberneck and still others disappear with important evidence. If you make a promise to help out a gang and do some chores, you gotta make sure you’re in the right spot at the right time to talk to the right person. Failure to do so is disrespectful: taking money beforehand and not showing up is some serious error and will absolutely end up with people shooting at you. You’ll notice, fairly early on, that you’re packing a gun, and you genuinely do not want to unholster that sucker any more than absolutely necessary. Most of the time, everything, and I mean everything, can be settled with money, favors and good standings in the community. And the community is everything in this game.

What helps really set this game apart is a trifecta of important details. Firstly, the gameplay is exciting and endearing to the ideology of Beat Cop. Being able to start out a simple day and end up with a laundry list of stuff to do in a very limited time sounds like it’d be daunting, but it’s pretty exciting all things considered. Writing tickets is the most necessary thing, and you can usually bang that out in between focusing on other things. Helping out the different gangs is important to moving forward your own personal cases, and deciding who you want to hang with gives you better drive. You don’t want to play down the middle: you can align with either the Crew or the Mafia without being a total dick to the other side. The people who aren’t gangsters, however – the diner owner, the priest at the church, even the local hookers – they’re the ones who have eyes and ears on the apartments and the street dealings, and they can get you valuable information for nothing more than the time of day. It’s way more personal, and the multiple choices you can make dictate how your game plays out.

Second, the aesthetic of the game. Having it be pixel design with a bit of density gives it a more gorgeous, retro feel that fits right in with the timeline of when the game took place. Not only does the pixel art put you in the 80s mindset properly (and it’s high quality pixels, no overly bulky shots here), but it also makes the performance and install size on the Switch a lightning dream. Unlike other titles that I sometimes get entranced by, this could fit on a CDR if that was a possibility, so it can just hang out on most people’s SD cards for the undetermined future. Hell, if I make the jump to 400GB this summer (fingers crossed), then Beat Cop might just be on the Switch forever. Great port job, Crunching Koalas. 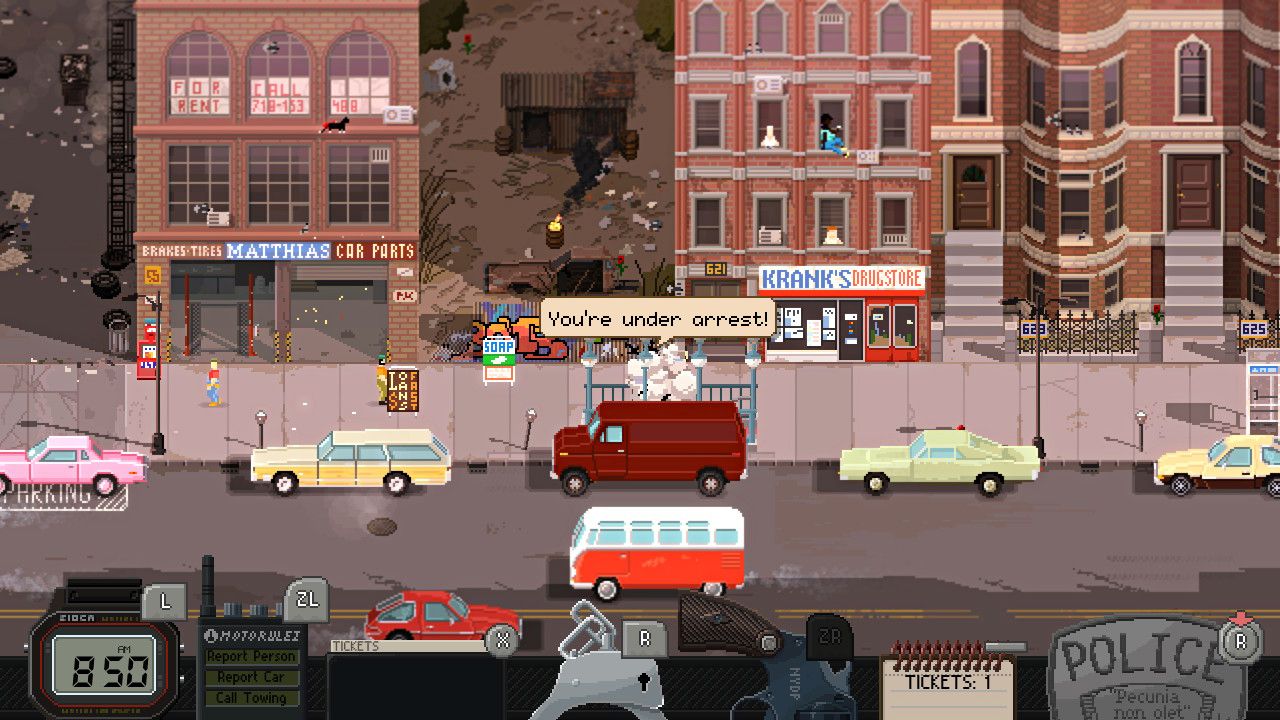 And I hope it does, because Beat Cop’s third point, the writing, makes it almost painful to say goodbye to the game before I play it to the bone (hey, gotta keep the wheels moving). The developers really have a soft spot for the tone and effects of the cop dramas and action movies of the 80s, and they bring it home in the way everything plays out. The level of blue language is off the charts, but not in a teenage “I’m being edgy” sort of way. It’s spot on in the degree and frequency that we drop expletives and colorful descriptions, and it absolutely gets me every time. There’s no real point in talking to every cop at the debriefing each day other than to hear the ridiculous banter and then the chief tearing everyone apart. Jack gets his own great set of one liners that he delivers to the denizens of Brooklyn, with his tone and manner changing depending on his relationship with that person or that gang. Hell, there’s a moment when you can actually get a prostitute that is unbelievably vulgar and hilarious (without showing anything) that does nothing except help your stamina and severely lower your police reputation. I’m curious how much better my ending would have been if I didn’t take that offer. Next time.

All in all, Beat Cop is a really fun and not especially consuming adventure that was super enjoyable each and every day that I played. If you’re an absolute maniac, you could probably knock out a full play through in a single day, though I’d recommend stretching it across two or three days so that the banter doesn’t feel stale and you can make it more episodic like the tv shows they wish to emulate. It’s got action, it’s got several endings, and it’s up to you to decide how you want to be remembered. Are you a good cop, a good person, a bad dude or just another blue stiff, needing a paycheck? You can do it all with style, a smile and some serious fun. It’s just another day on the streets.

Being able to take everything that was cool about the 80s buddy cop movies/cop dramas and boil it into a successful simulation/action game is no small feat.