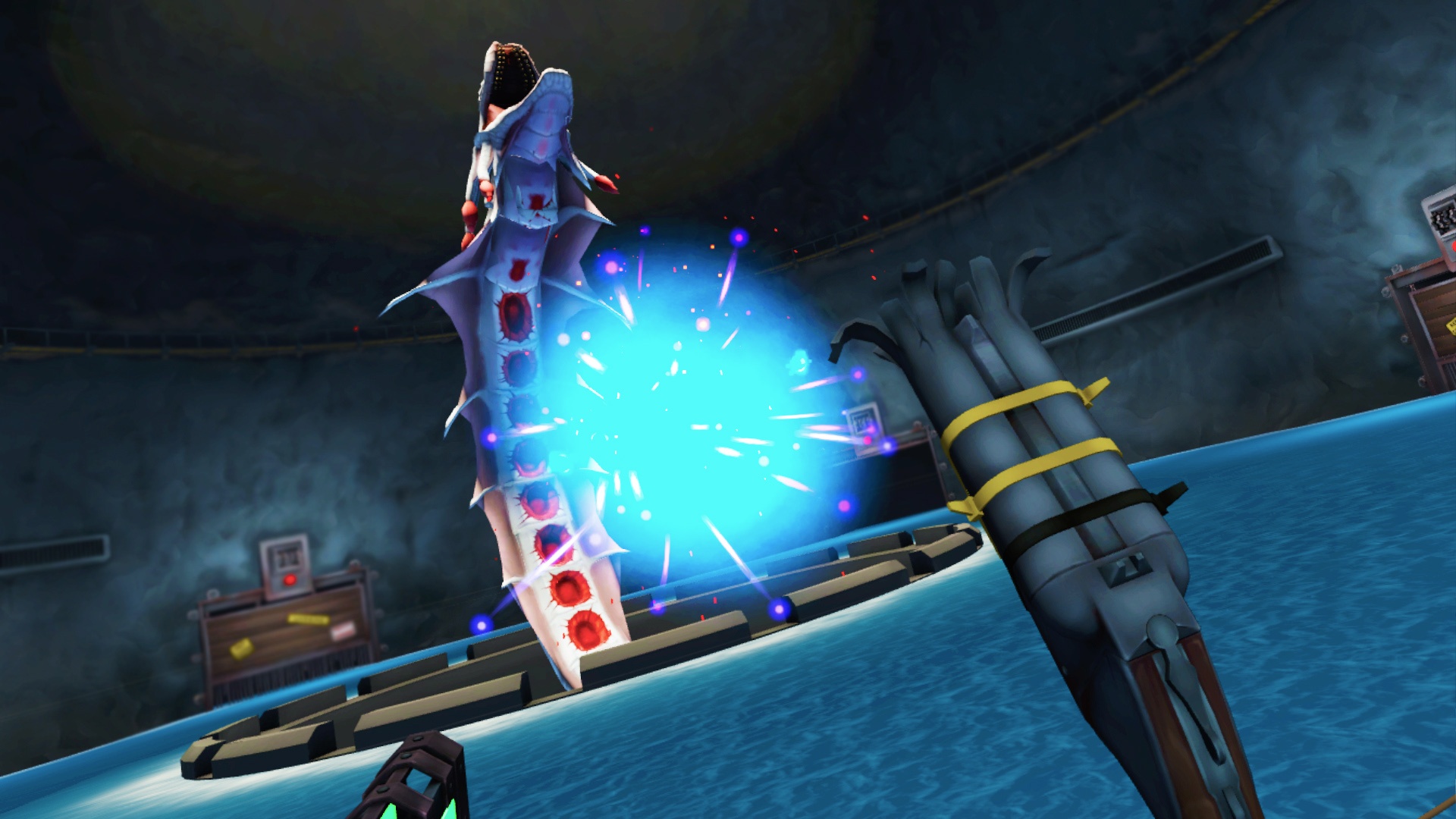 One thing that VR does incredibly well is shooting games where you don’t have to worry about controlling your movement. Whether it’s an on-rails shooter or there’s no movement at all, there’s an incredible sense of immersion when all you have to do is look around, aim, shoot, and dodge with your head. Dick Wilde 2 is one such game, throwing you onto a floating raft to eliminate toxic-mutated wildlife. From mutated piranhas that pounce right at your face to frogs that hurl projectiles and even a massively huge crab boss, you’ll be putting your ridiculously awesome weapons to the test nonstop.

I hope your trigger finger is itchy, because Dick Wilde 2 is going to scratch it… a lot. As you ride your raft down the water you’ll be firing enough rounds to make Rambo jealous without even having to reload! But I’ve got to admit: it feels GOOD! Gameplay is incredibly simple but wonderful: you aim at stuff and then you blow it to pieces. Destroying junk in the water earns you money, and killing enemies… well… that helps to prevent you from dying. Each gun has a terrific sound effect and a unique look that really makes me believe Dick Wilde made it out of junk laying around. It’s a delight to shoot a piranha right in its dumb face when it’s 2 inches from biting your face, and dodging and weaving between numerous projectiles is both a workout and a heck of a good time. The main areas of the levels are a bit plain, but there are a handful of scenic sights along the way as well. Besides, by the time the game’s difficulty ramps up a bit, you’ll be too busy shooting everything to even consider looking around anyway.

Each level is made up of numerous segments, many of which offer you different path options. Before each segment (including at the beginning of the level) you’re presented with a shop that allows you to spend your hard-earned cash on weapon changes and/or upgrades. You start each level with a revolver in each hand (or just one if you’re using an Aim Controller), but honestly I enjoyed the revolver so much that I almost always kept one in my right hand anyway. Other purchases lower damage from collisions with your raft, give you additional max health, or heal health you’ve lost. 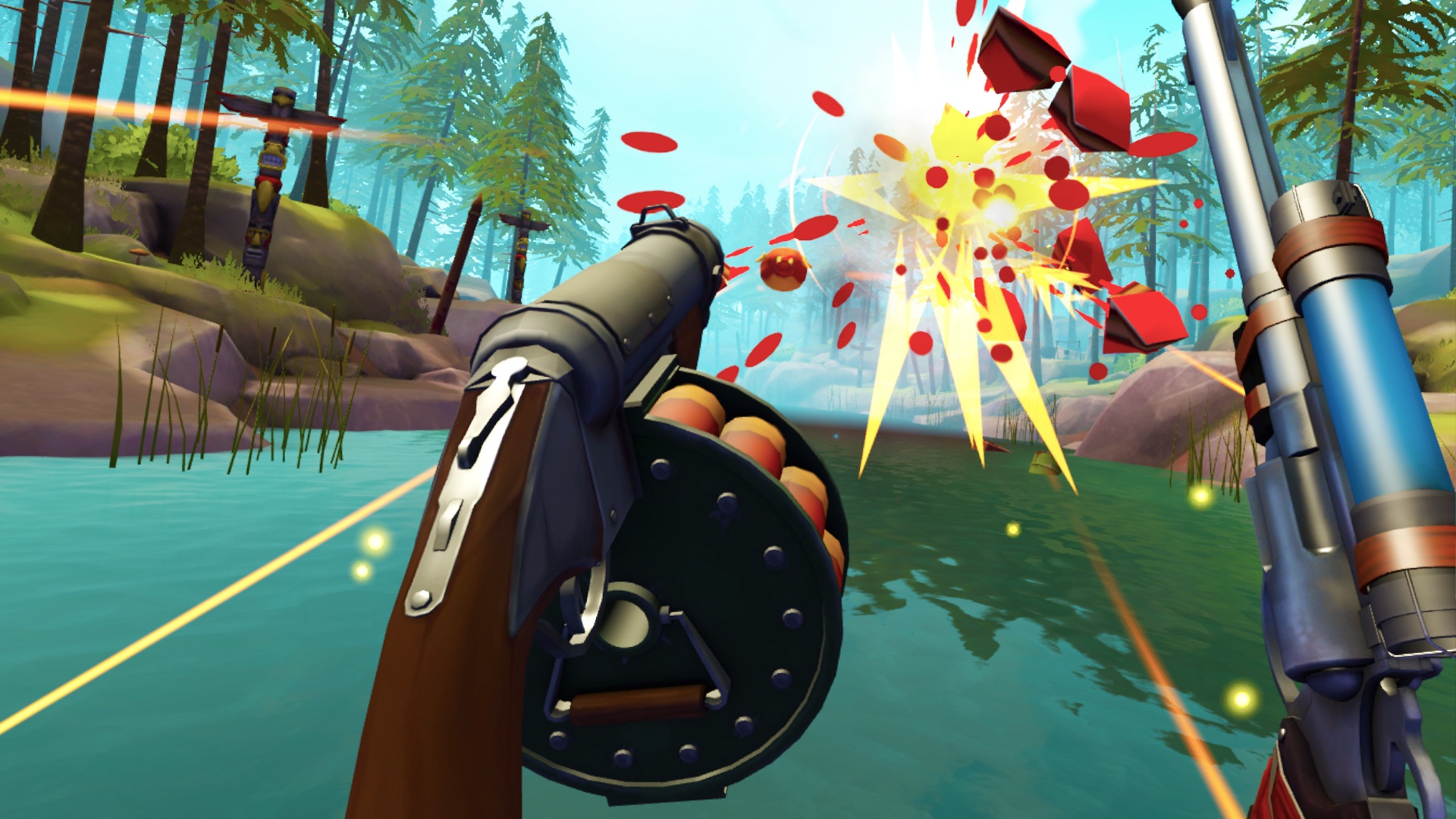 Dick Wilde 2 pits you against 3 worlds, each of which has 6 regular levels, 4 weapon trials, and a boss. Each regular level has keys you can collect, and levels are unlocked by gathering a certain total number of keys. Beating a level also potentially gives you $50-150 bonus starting cash for every level in that world depending on what percentage of that level’s stuff you destroyed. Greater starting cash allows you to buy more upgrades and/or better weapons right off the bat, which makes all of the levels in that world a bit easier. Finally, since the main levels have numerous paths, it’s impossible to get all of the keys in a level in one try. You’ll need to replay them at least one more time to get them all, and many levels require three or more. These paths all have different enemies and obstacles, though, and all of this creates a rather fun cycle of running a level, collecting keys, and destroying stuff so you can get more starting cash and do even better the next time. Going back to older levels with more powerful weapons is awesome too; I managed to complete the first level with only one Move Controller using the Microwave Gun once I unlocked it. It felt like a peaceful ride down a river while blasting away everything with an OP laser beam.

Weapon trials are special levels that don’t have shop checkpoints and force you to only use the weapon you’ll be unlocking. This works both as a unique challenge and a great way to learn how a new weapon works. As someone who primarily used revolvers and energy weapons, the shotgun trials were a very different experience, and the uzis quickly made great options for my left hand since I’m far less accurate with it but can aim in a general direction and hope to hit stuff.

The majority of my time with Dick Wilde 2 was spent solo. I don’t have any friends with PSVR, so it’s not like I could ask one to team up with me. You can match up with a random person online, but the first three times I tried it I didn’t find anyone for a few minutes, so I gave up and went back to solo play. But then the fourth time something magical happened: I teamed up with someone else instantly, and had an absolute blast. The game seemed easier with someone else, sure, but communication in the game was one of the most unique, cool experiences. You can see the other player’s guns, where they’re aiming, and their “head” (with a nifty hat!). This sounds incredibly minimal for conversation, but you can easily cheer, dance, raise the roof, high-five one another, and even show the other player what level you want them to start up or what item you want them to buy by aiming at it with your own gun. I’m sure plenty of VR games do this, but this was my first experience with it, and it was amazing. In fact, if you’re at all interested in the game and have a friend that could play the game too, you should both buy a copy and play the heck out of it together. If you’re ahead of them, like the person I played with was, you can even choose a level they haven’t unlocked yet. This allowed me to use weapons from world 3 while I was still in world 1! 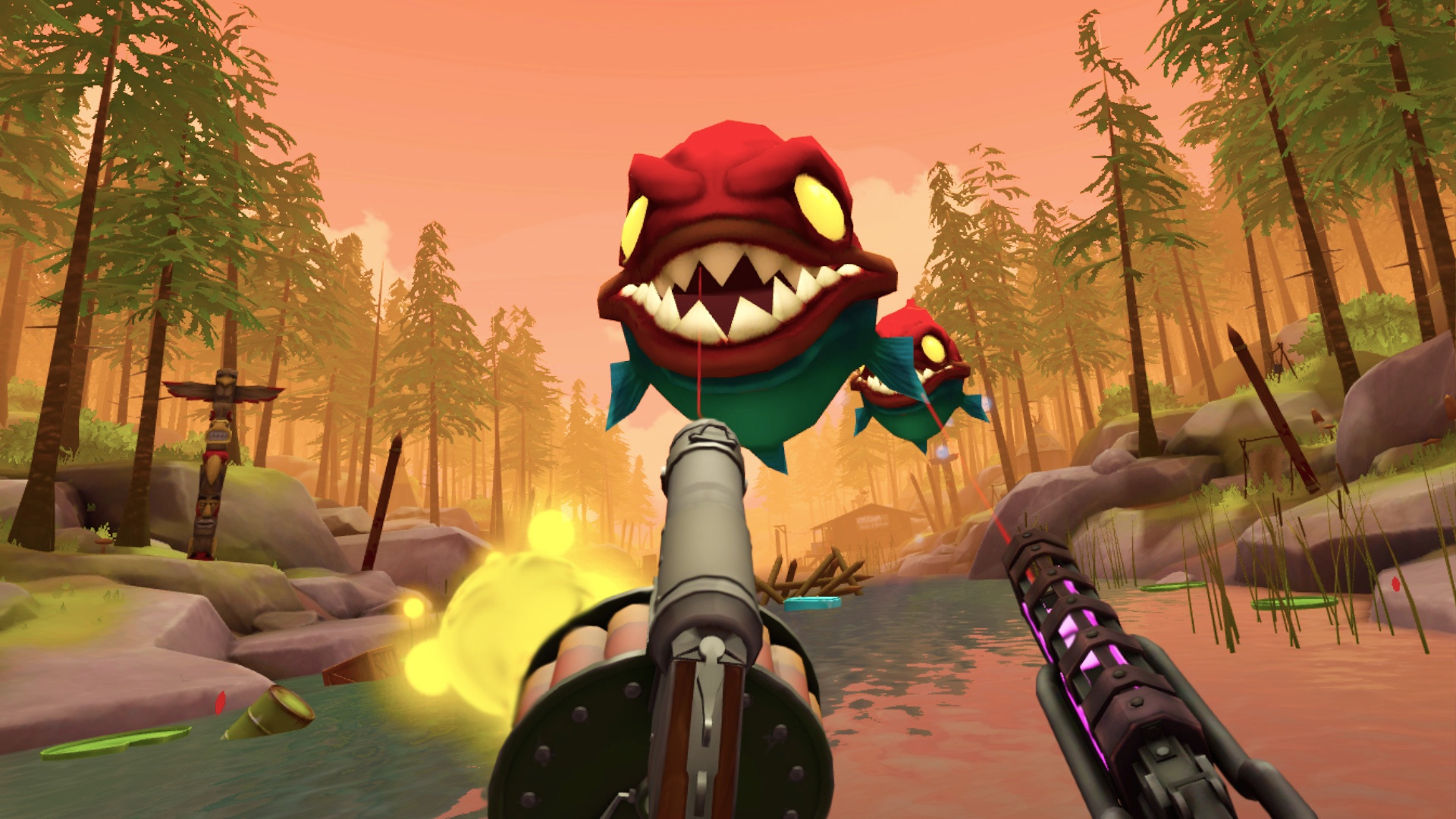 Speaking of friends, have you ever played an online game with friends, and all they want to do is run around an open area mucking around for no reason at all? Back in my Destiny days, I learned that impatience far too well. If you do too, at least know that you’ll have plenty to do while you’re waiting. The “main menu” area has loads of stuff to shoot at, including the expert-tier toaster that pops up a piece of toast when you shoot it. There are stacks of cans, very distant targets, and even a banjo that strums when you hit it. I spent a few minutes just shooting stuff when I started the game up the first time, and this simple area was what first made me fall in love with the game.

Sadly, there are some issues with the game as well. There were times when the graphics would glitch a bit and I’d see things underwater before they surface. Using the Microwave Gun for an extended period of time without letting go of the trigger seemed to break all of the level’s audio, and there were times that an enemy would shoot through an object and hit me with little or no warning. Other times, an enemy would be near enough to a checkpoint shop that it would fire at an area very near me the whole time I was shopping. There was also a text error: whenever the game updated the starting cash in world 2, it said “world 1” instead, which freaked me out at first since the number was less than half of my world 1 starting cash.

Even with all of these issues, Dick Wilde 2 was a blast. I haven’t played the original, but this one is inspiring me to go back and grab a copy. It’s a good game solo, but it’s a terrific game with a stranger and I can only imagine it’s magical with a friend.

Dick Wilde 2 was a blast. It’s a good game solo, but it’s a terrific game with a stranger and I can only imagine it’s magical with a friend.