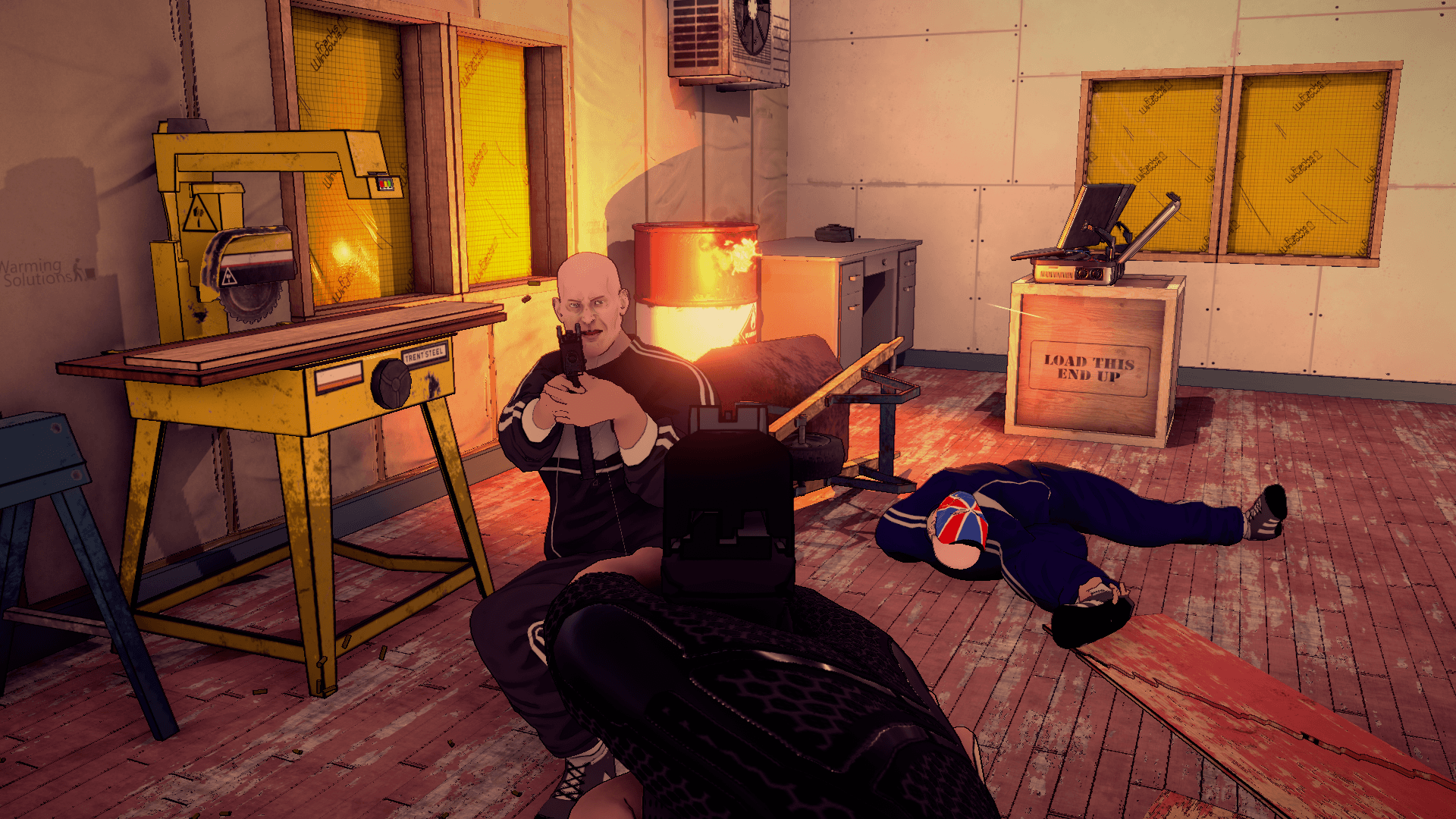 Random generation in games, when designed and introduced by the developers, is always intended to the spiciest flavour of the month. As in theory, randomly generated levels, skills, and enemies are meant to be a source of seemingly endless content. But as the current generation of hardware has proven, this is rarely ever the case and whenever a brand new title is released, with the RNG stapled on its box, many, including me are inclined to think that it is likely going to be a disappointment – especially when the title in question is fully three-dimensional. And understandably, when I first heard about RICO, an FPS, with randomly generated stages I was highly intrigued – but also immensely sceptical.

In the vain of now the largely forgotten XIII, RICO is a First Person Shooter, FPS for short, with matte, cell shaded graphics. But unlike the visual presentation of the Borderlands series, RICO doesn’t feature the sheer amount of detail and spectacle, as the developer behind has opted for a tamer aesthetic. This in the long run works in favour of the title, as it makes its frantic and punishing gameplay much more comprehensible. As all the in-game environments aren’t cluttered with unnecessary garbage, and the enemy design is easily distinguishable and allows you to adapt your approach on the fly.

Since we are on the subject of character design, then it is easy to assume that such is incredibly lazy as all the in-game levels are filled with characters which appear to be seemingly out-of-place. But as you press through the title’s CASE mode, which has you dismantle a criminal syndicate piece by piece, you will soon come to realise that such approach has been deliberate. As different enemy archetypes poses varying amounts of health, damage, and survivability. 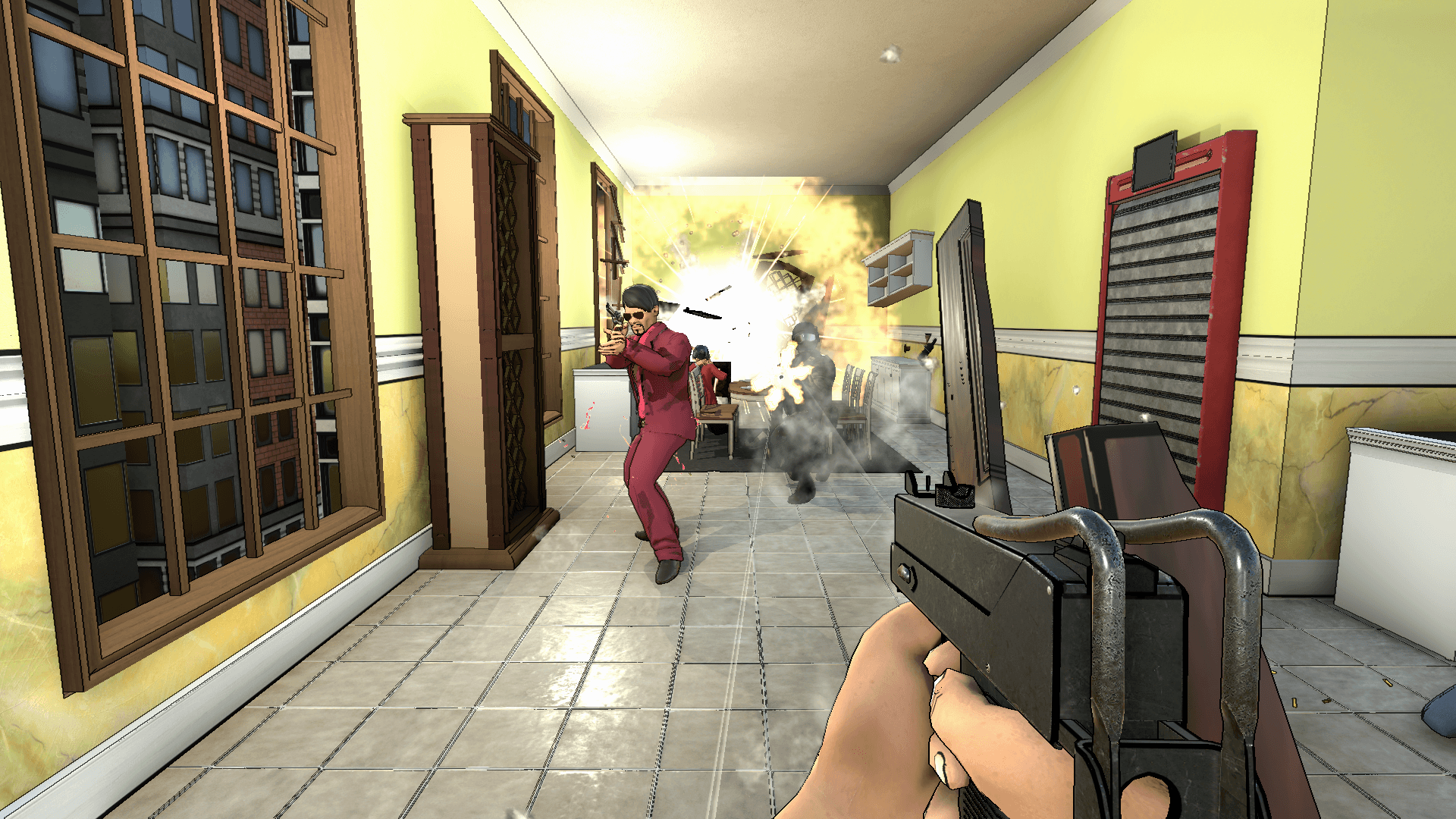 For example, the fat bare chested biker has more health than the tracksuit wearing guido, so understandably this has you instinctively go for the biker first as he is the quote on quote tank, whereas the latter can be put down with a single bullet. But on the other hand, if the biker is wearing a mask, then you are better off taking down all the smaller enemies first, as this enemy type will now require multiple headshots to be put down, and it is better to take such enemies one-by-one.

The core gameplay of Rico is rather simplistic. You get dropped into a rather reasonably generated level, with the guns and equipment which you have selected prior to starting, and make your way from room to room clearing enemies and completing objectives. The in-game objectives range from picking up evidence and destruction of data, to bomb defusal and mini-boss fights. And while every level features multiple objectives, then usually all you have to do is complete one of the starting tasks, which are visible in the top left corner of your screen, in order to complete the level.

RICO just like The Binding of Isaac, or Rogue Legacy, is a rather tough and unforgiving experience – especially on the higher levels. And while enemies are a plenty, and reinforcements are a common place, then you are given a clear edge over the in-game hostiles as nearly every room can be breached. And when you make the first entry into hostile filled abode by kicking the doors down, the time slows down and gives you roughly five seconds of slow-mo, where you can pick the enemies off before they even have a chance to fire a bullet. And while this mechanic has been introduced with the player being able to clear each and every room, within the slowdown, then this does not always happen, as not all enemies are always visible, as they can, and often are standing around corners, and behind scenery.

Since we are on the subject of enemies, then I feel that it is important to underline that they are rather, well, simple – to be nice. They either stand still, and wait for you to pick them off, or mindlessly rush you – there is no in between. There is no intricacy to their behaviour, no flair, and no tactics. Hell, during my six hours or so which I’ve spent with the title, I’ve seen enemies run head first into a wall which their script ignored, or I have been shot through a wall, as all in-game hostiles have laser perfect precision, even when they don’t have you in your sights. 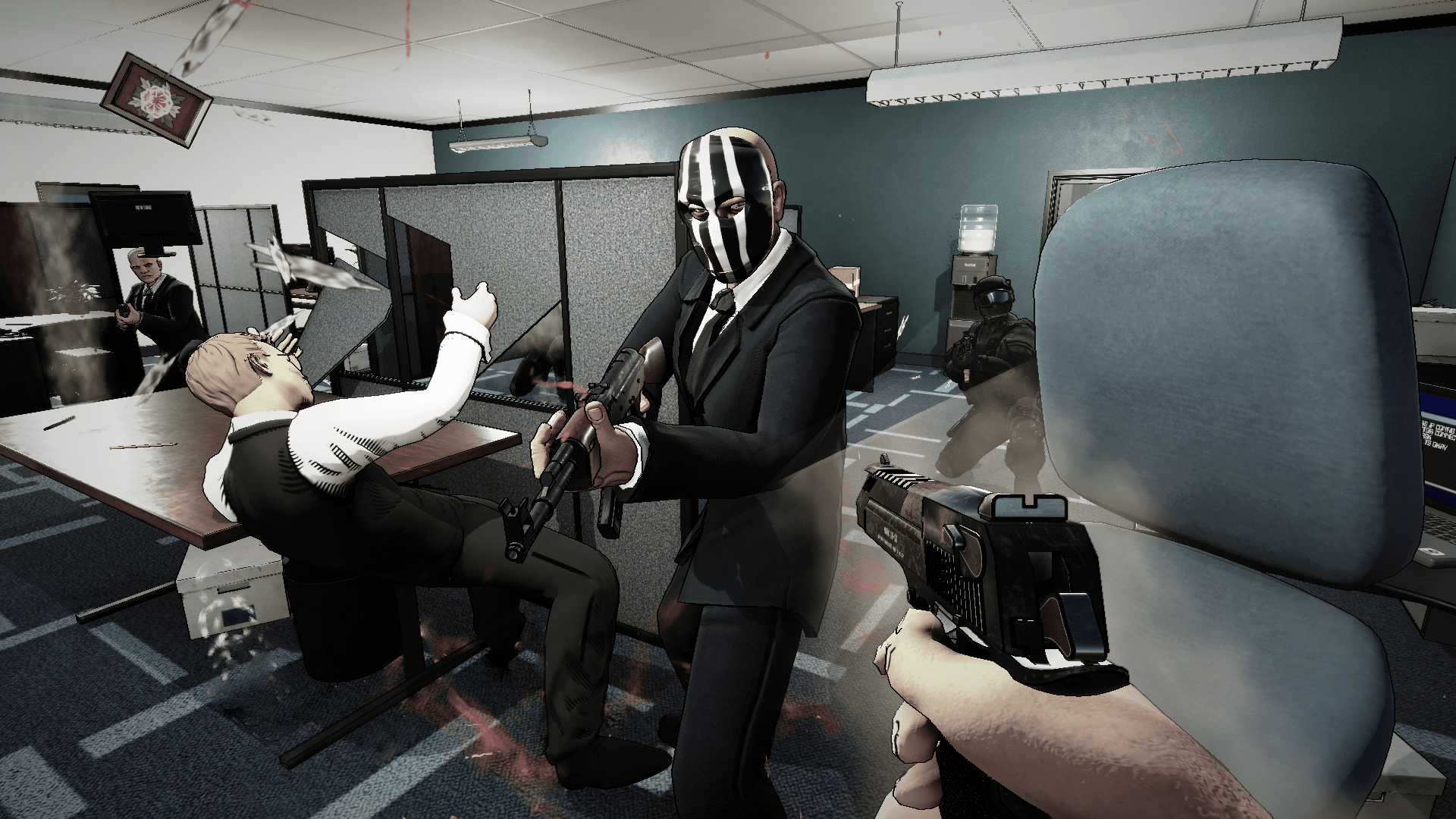 Losing health, or potentially even dying, due to being shot by an enemy which you can’t even see, can be disheartening. But killing through walls works both ways, as the console aim assist allows you to also aim in on the enemies, which you yourself can’t even see. And the aim assist, just like the hostile AI, leaves a lot to be desired, as sometimes in hones in on one particular mobster, and straight up refuses you the option to move your reticule onto another, potentially much more dangerous enemy. But this is a rather rare occurrence, and has only ever happened to me once, and on both occasions, when I was breaching a room with hostiles on two different floors. So it is likely that the vertical spacing of the enemies may have something to do with this particular bug.

Lastly, I feel it is important to underline that while RICO’s content is largely RNG, then it does have a lot of forms, and there is hell of a lot of it. As with the daily challenge, the CASE story mode, quick play, and Stand your Ground, the possibilities are not endless, but plentiful. And it is more than likely that right after purchasing RICO, you will spend the first few hours simply discovering new and exciting things, over and over again. But once the initial excitement dissipates, it is difficult to stick with RICO for an extended play session like with some other games of the RNG archetype. However, it is the kind of a title where you will return to it, over and over again, even if it is to complete a single case, or to play through the daily challenge.

To summarise, all that really has to be said about RICO is that it is a blast to play. Its random generation may not be perfect, the AI is way off of the one of F.E.A.R., and it will not sweep you off of your feet with its visuals. But it will certainly keep you stuck to the screen for months on end, as it is truly a one of a kind title, which is incredibly fun when playing alone, but is over the top bonkers when played with a partner either in split-screen, or online. And I feel like it is important to highlight titles like RICO in this day and age, where live-service games have done their best to exterminate games which are simply fun – games like RICO.

RICO may not be perfect like some modern AAA titles, but unlike those, it is incredibly fun to play. As its exhilarating gameplay and inclusion of co-op, make it one of the better indie games of the last twelve months.