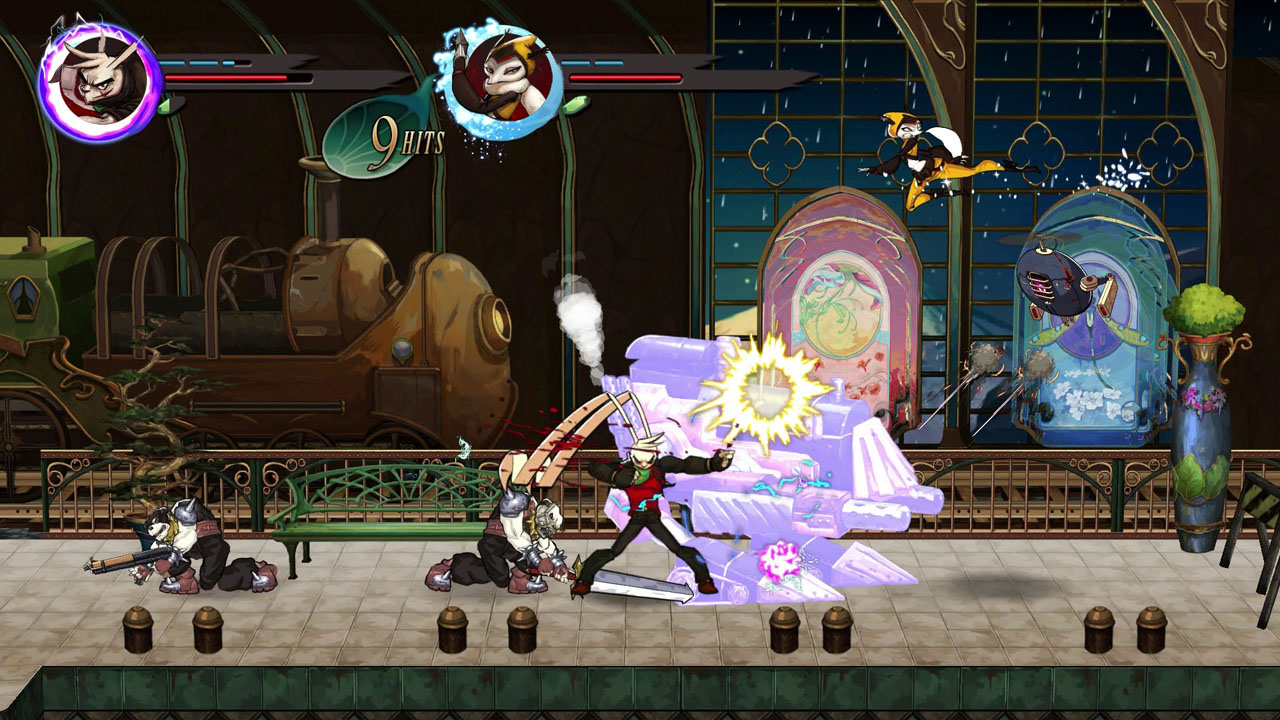 Making prequels is a really tenacious and difficult thing to do. In terms of storyline, you have to make sure that whatever you’re establishing doesn’t accidentally contradict, overlap or straight up destroy something that was created by the source material (see most of the plot of Attack of the Clones). Additionally, you’re in a weird spot where you now have the technology and potential funds to make the prequel look better than the original, so it’s always a mixed feeling of excitement and confusion. But sometimes you’re making a prequel that doesn’t quite fit in anywhere, because the original didn’t necessarily call for it. No one needed to know the full backstory of Sub-Zero, yet the Mortal Kombat franchise gave him this bizarre, standalone, side scrolling game years and years ago. I feel that the creators of Dusty Raging Fist, a prequel to Dusty Revenge, had their hearts in the right place. However, there’s something slightly  lacking in the overall package, and it makes the attempt fall short of real greatness.

The prequel takes place in the small town of Double Bill Town, where Dusty, the bruiser rabbit, is a merry sheriff and sort of doing alright. Then this weird little kid (who I think is an actual goat kid) named Elijah rolls up, crying about how everyone in his village has been kidnapped. Dusty and Darg, the giant sheep, are totally ready to go kick some butt and save everyone, but then Kitsuke (Asian fox) runs in being like “Sensei told us to get Elemental Powers to deal with a big evil coming!” So naturally we go to do that first, because who doesn’t want a bunch of boss extra powers? Then it turns out that Elijah didn’t run and hide, like Dusty told him to, but, instead, is now clearly either possessed by an evil spirit, or was evil all along, and now we’re just moving right ahead, getting ready for the big showdown. Oh, and we meet a snow leopard sniper named Snow, which adds a bit to the story (an AWOL military sniper is just SO SPECIFIC), but basically adds more to the gameplay, and that’s what you’re dealing with. Thankfully, this is meant to be a brawler, so the overly strange conditions of the story don’t affect the game itself overall. 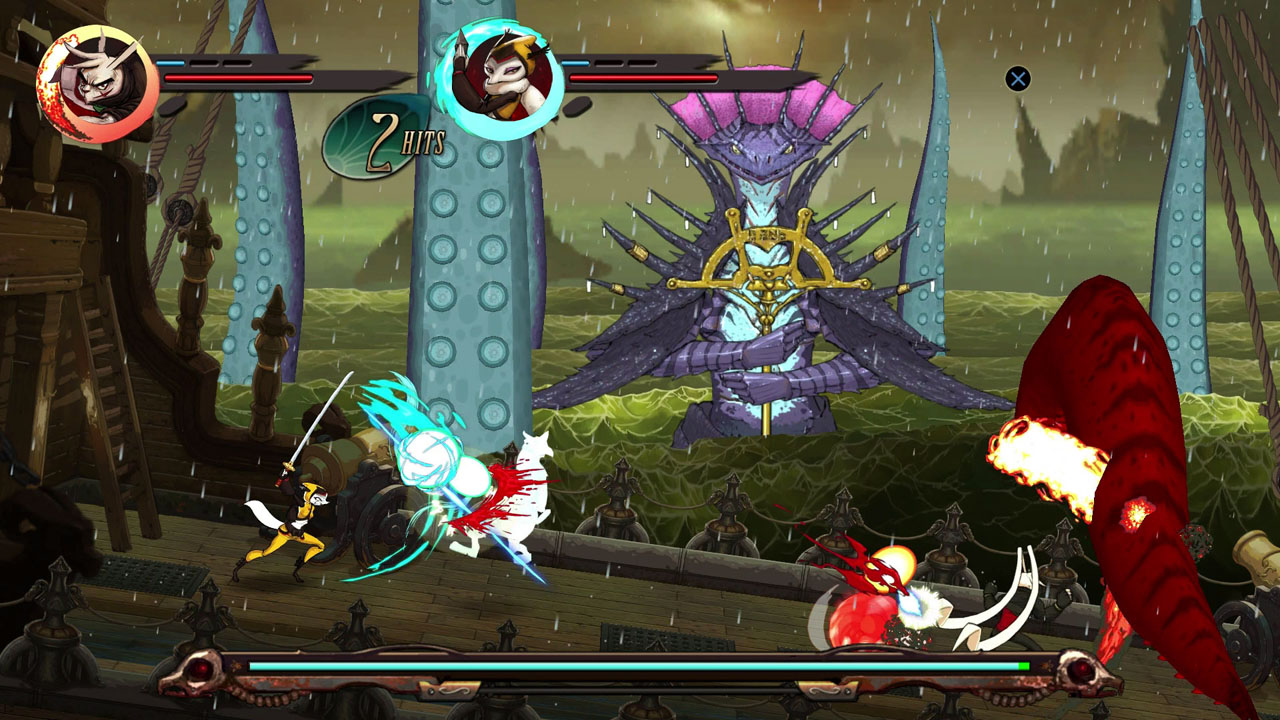 Alright, so, ignoring the fact that everyone is anthropomorphic animals (that’s just a thing that happens sometimes, right?), there are a few good boxes that Dusty Raging Fist ticks in the very beginning. Firstly, a majority of the game is all about the combat. You have a light, heavy, and ranged attack, and, later on, you add more to this, but let’s not get ahead of ourselves. Dusty and his cohorts start off being able to execute relatively simple combinations and attacks, evading and rolling, double jumping and generally doing what’s needed to get from point A to point B. The game is absolutely, infinitely more enjoyable when you have a second or even third player, especially entering into later levels with hardier enemies and even bosses. If you get the principle of a beat em up (which is to punch bad guys), then you can successfully execute the game.

The cool elements of Dusty Raging Fist come from the under-the-hood construct of experience points, primarily. Once you get a bit into the game, you find out that you have a chance to invest EXP points (dropped from enemies and found in treasure chests) into making the game more interesting. The primary invest obviously comes from leveling up the fighter that you’re using, which, in turn, makes the character substantially more effective and impressive. You actually add more combinations and attack types through leveling, making Dusty and the gang more aggressive and successful in fighting back the darkness. One of the first abilities that Dusty gets from level 2 is a sort of slide tackle that becomes paramount in single player mode, because it sweeps and also gives you a strength to go with your range (compared to the normal ranged attack, which is pretty weak). It’s really cool watching the fighter evolve throughout the game and become a more effective machine, as the timing of leveling usually coincides with unlocking new elemental beings. Additionally, the EXP can be dumped into the aforementioned elementals (giving you better strength when you summon them) and into Snow, who’ll have more shots when you need to call upon him.

Truthfully, things like the elemental summons sort of made sense, because they fit well into the story and were easy enough to activate with an R stick trigger (plus summoning Moloch was always a joy to behold), but I really didn’t like the Snow addition. His story is weird right until the very end, and I wasn’t totally satisfied with that whole explanation anyways. Moreover, it didn’t feel like a natural addition to the game. Instead, you’d be playing along, punching and kicking and doing some sweet sword combos, and then you’d have to stop everything to deal with something on the horizon. Between picking off nests of ranged attackers, blowing up statues, or needing Snow to find the hidden crystal caches in each stage, it was this very jarring change that often needed to be done at the beginning or end of combat. Not to mention Snow gets crazy powerful after a couple of levels and becomes the fastest way to deal with mobs and inflict a ton of damage to bosses.I tried to delegate Snow duties to other people as often as possible because it just wasn’t my jam. 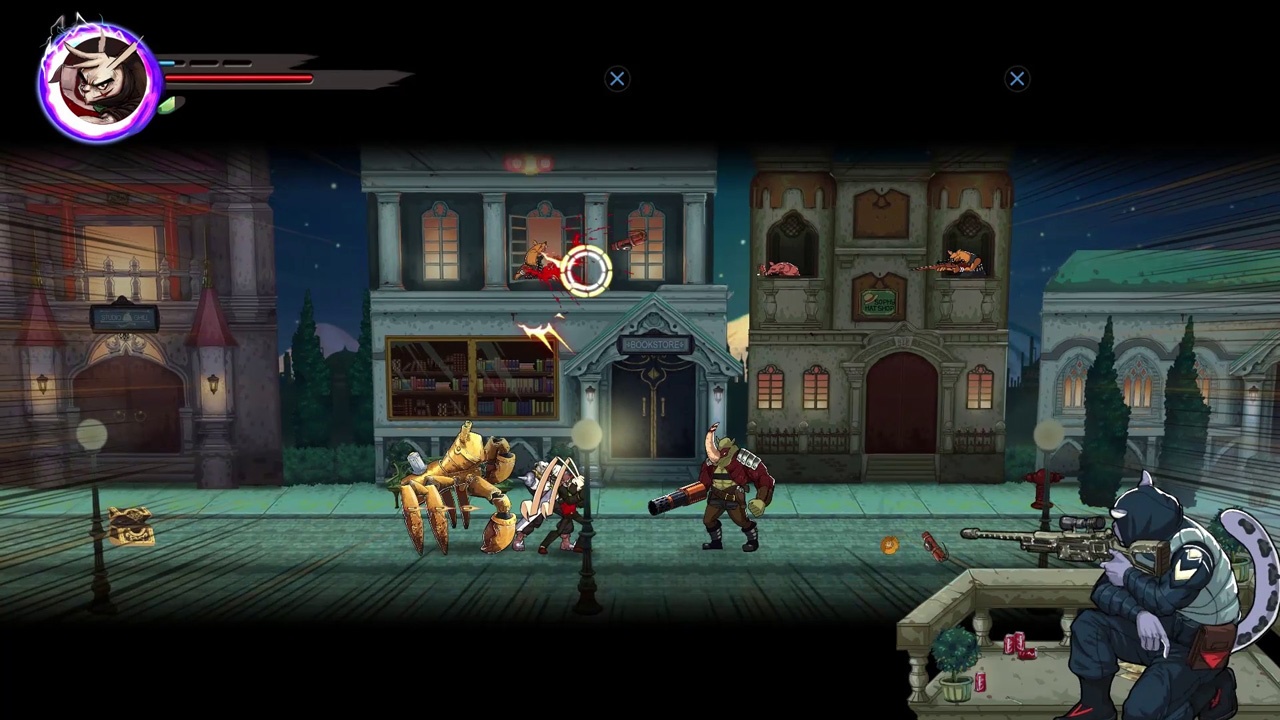 The real issue from Dusty Raging Fist just comes from the overall appearance and execution on the Switch. While the game is far from unplayable, there’s a lack of fluidity in the movement and combat. I don’t feel like we were able to jump and dash in the sort of elegant way that the character design conveyed, which is a shame. I did enjoy the art styling of the game, from the landscapes and level formatting to the different kinds of NPCs and active characters (chameleon assassins are my favorite).  There was a bit of stuttering during some of the more crowded levels, particularly on the Queen Victoria, which may have been thrown off due to birds flying in the background. When it comes to a brawler, I love that there’s so much added into the game in terms of mechanics and ideas, but, if we can’t make sure the core mission statement runs smoothly, the rest is for naught.

Add it all together with a soundtrack that felt a bit out of place (felt more detective mystery than fighter), and Dusty Raging Fist is a game that only lands on the side of good, not great. There’s a lot of plates spinning, and we keep a majority of them moving, but the Snow one is wobbly and we almost drop the gameplay plate several times. The indie waters are starting to grow murky, and every game needs to do their best to keep their heads above waters. If you find the right group of friends, this is a decent game to complete, and it stays interesting enough: I just don’t think I’ll be back to see the further adventures of Dusty.