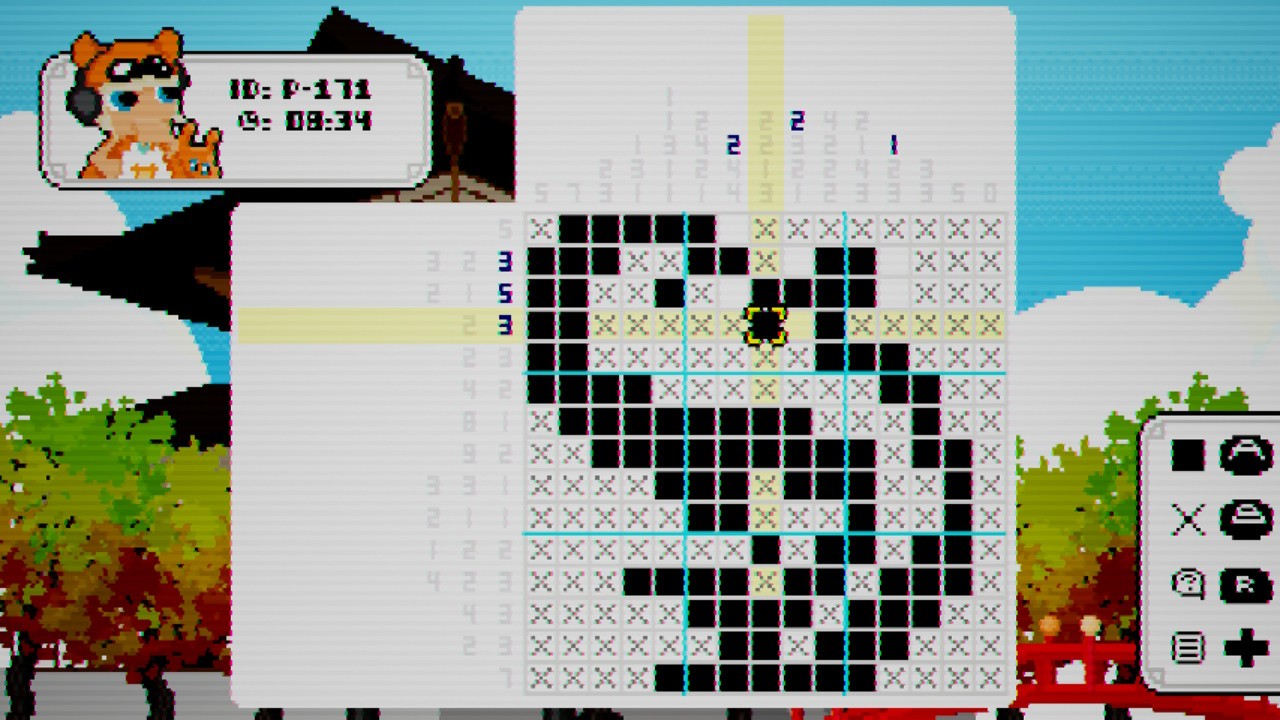 If there’s one thing that digital recreations of classic puzzles do well, is that they can bring something different to their style. For instance, filling in the crossword within a magazine or paper, is just that; solve the question, fill in the answer and voila! However, within video games, these style of puzzles can hold so much more, such as more content, a splash of colour and even backgrounds on which to complete them. It’s one of the reasons why I enjoy doing puzzles on computers or consoles; especially hand-held devices. What I’m always on the look out for though, is a puzzle game that brings something different or adds something new, such as in the case of Piczle Cross Adventure as it solves a release onto the Nintendo Switch.

Developed by Score Studios and published through Plug In Digital, Piczle Cross Adventure presents a series of puzzles that follow the picross, or nonograms, formula. If you’re not familiar with the concept, it involves completing a series of grids with a series of co-ordinates to produce an overall picture. For me personally, they’re my favourite kind of puzzles, presenting a good challenge and being fun to complete on the way. However, with this game, it brings a whole lot more than just simple puzzling, bringing with it a story-driven, role-playing adventure where you earn XP, level up characters and rebuild the world around you through the magic of nonograms.

The story follows the exploits of Score-chan, her faithful companion, Gig and their mentor, Professor Matrix. They embark on a journey around the town of Piczleshire after the evil Dr. Mono Chromatic and her sidekick, under_SCORE have devised a weapon that turns everyday objects into black and white pixels. Using the power of puzzle solving, our heroes scour the streets and enter the buildings around town in order to find the monochromatic distortions and place them back into their true form, colour and position. Part role-playing adventure and part puzzler, you take control of your characters, explore the regions around you and complete a series of puzzles to advance the story, unlock secrets and ultimately, face-off against the evil wrongdoing that has taken place in and around Piczleshire. 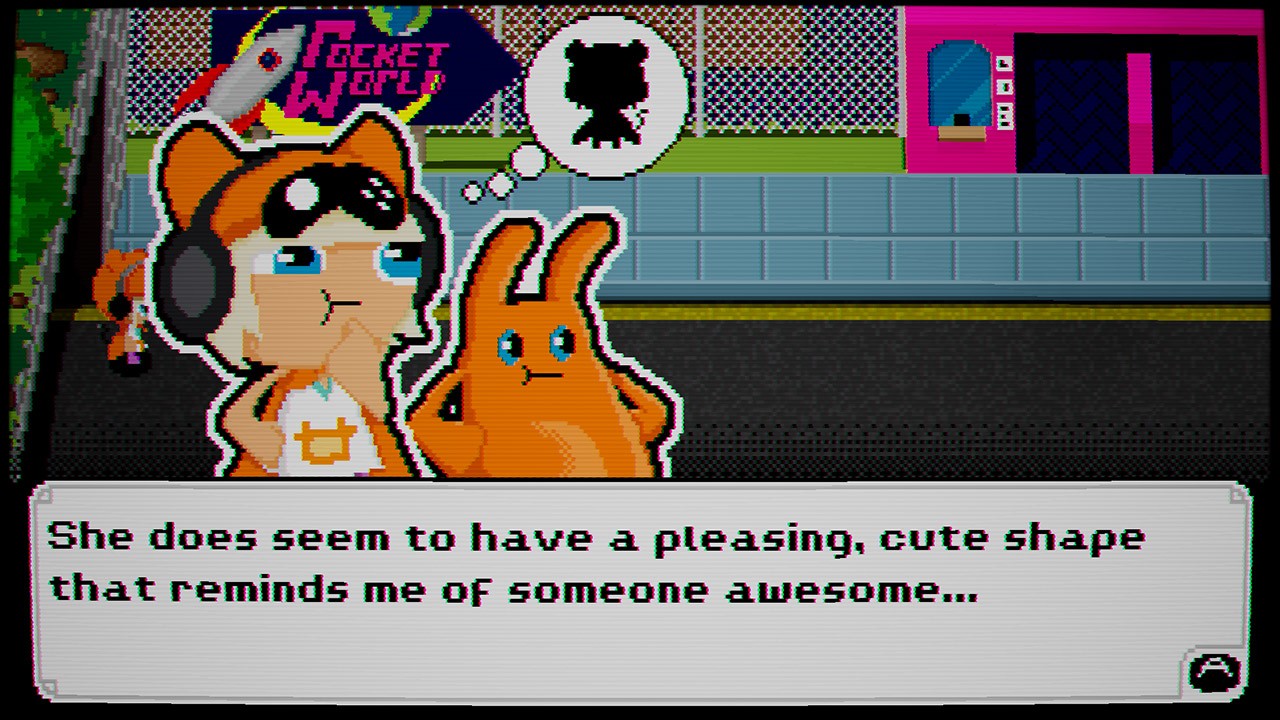 With a range of genres and play-styles, this puzzler is elevated to new heights and playability from your normal, bog-standard puzzle affair. Interaction with characters creates a narrative with which to drive you forward, starting off with some simple repairs around the lab of Professor Matrix, before venturing out to return the town to its former glory. The narrative brings a series of quests with it, the first being to find a map of the town with which to navigate. As you embark on your journey, you come across a series of distortions that represent the puzzles that need to be solved. However, with many nonogram puzzles just presenting random pictures, Piczle Cross Adventures requires you to produce a series of finished artworks that represent the item that should be in its place within the town. For instance, mail boxes, manhole covers and cars need to be rebuilt and placed back where they belong in the street, whereas ice-creams, pizzas and even toilet signs need to be put back on the shelves in the local shop, or books placed within the library.

With a full-blown story, narrative and adventure to follow, it produces a more invested feel into completing each of the puzzles. However, there are also a number of other secrets that need to be revealed. I won’t give any away, but what I can say, is that you can also interact with the environment around you to uncover a host of useful items. As you progress with the story and puzzle completions, your character also gains XP and levels up. This soon becomes an important requisite, as certain puzzles require certain XP levels in order to solve them. Find a puzzle above your current level, then you need to find other, accessible puzzles to level up so that you can return and solve its ever-increasing challenge. 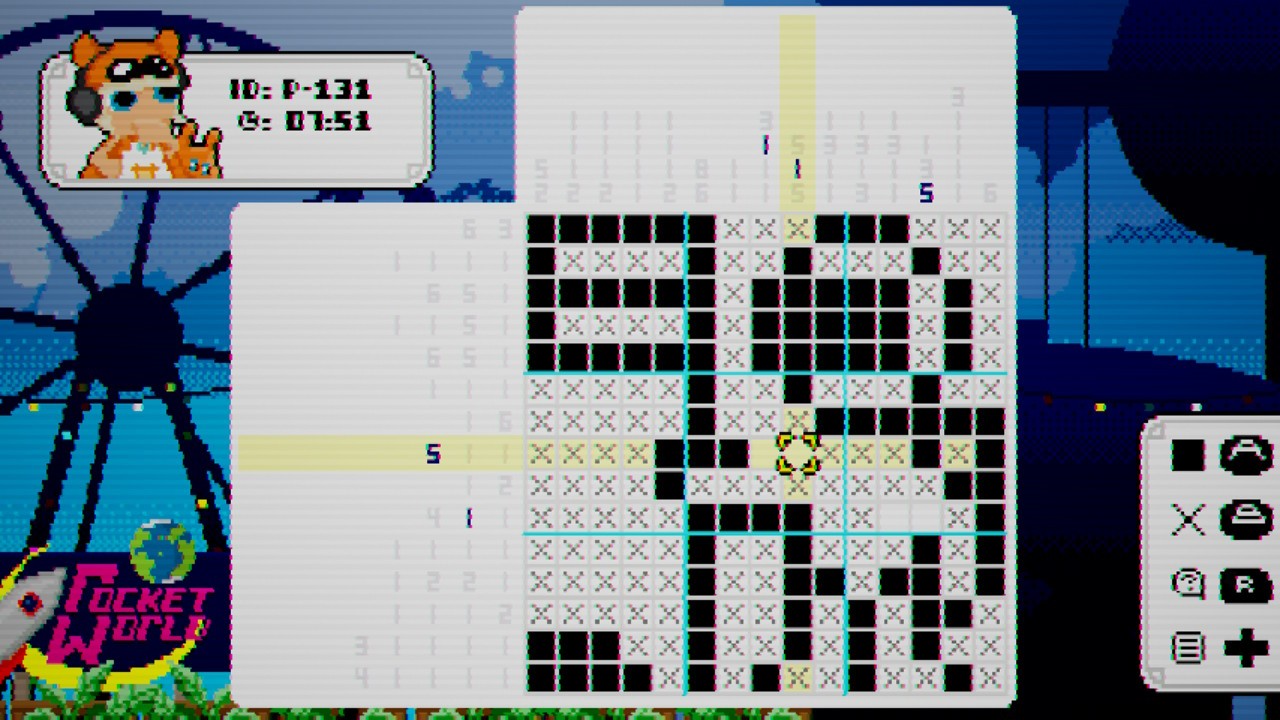 If you’re simply in it for the puzzles though, then fear not, as the series of picross, or nonogram puzzles within this game, over 300 variants, have been expertly crafted to produce a nicely balanced challenge. Whereby some of the early presentations can be easily solved, others provide a really good challenge with a clever use of co-ordinates that keep you guessing right until the end whether you are on the right track to producing their solutions. You can call upon the help of a single-use roulette hint, which randomly selects one square and fills in the X and Y axis along its axis, but more often than not, they don’t give too much away and hold enough difficulty to keep them interesting. There are also a series of in-game trophies, or achievements that can also be unlocked, providing a nice side-distraction, but don’t really add anything to the overall gameplay.

The game also excels in its presentation, choosing to go with a retro-styled pixel style of graphics. It adds a nice charm to the overall level of presentation; one that can be personalised to create a more retro feel with scan lines to represent the game being played on an old-fashiond CRT monitor. Its soundtrack also takes on a chip-tune style of sound, although its toe-tappingly and infuriatingly addictive tunes are simply one the biggest highlights of this game. Honestly, its soundtrack is so good, that you’ll be humming it in your sleep. All of its elements combine to produce a charming and fun game, but one that also contains a decent challenge in its cleverly designed picross puzzles.

Overall, Piczle Cross Adventure is one of the best puzzle games I have ever had the pleasure of playing. Its light role-playing adventure, charming presentations and interesting puzzles all combine to produce an overall package that is fun to play, listen to and solve. Its puzzling sections are nicely broken up by its exploration element, which in turn, is nicely broken up by its puzzle sections. Everything here has a reason for doing so, whether it’s to simply solve a puzzle and level up, or rebuild a shop in order to complete a quest. It adds so much more to the basic template of being a simple puzzle game and in doing so, makes it a unique and enjoyable journey that role-players and puzzlers alike will enjoy working through. To put it simply, this is a perfect example of how puzzle gaming should be done.

Picross and Role-Playing combine to produce a journey of puzzles and fun in Piczle Cross Adventure.