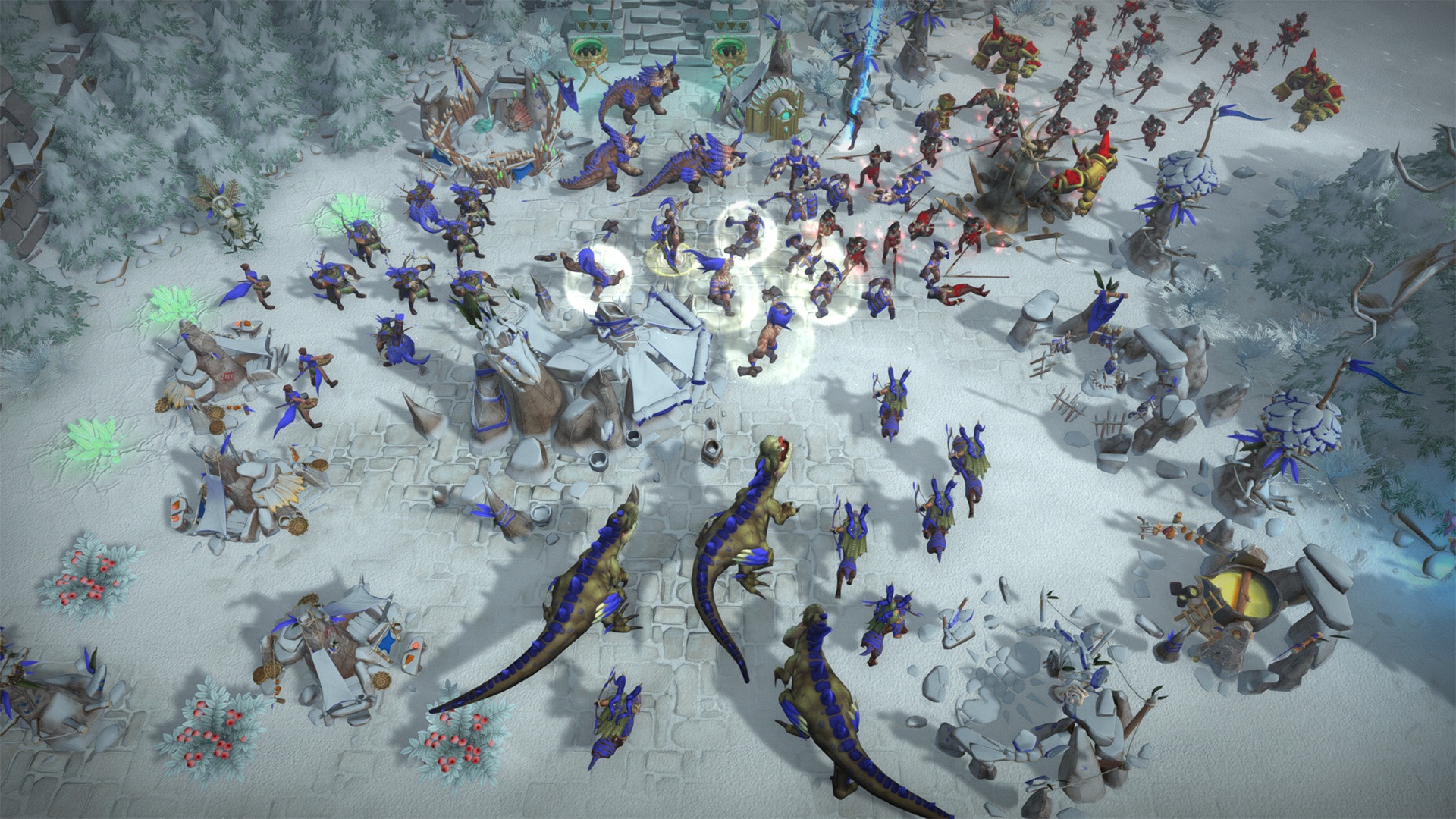 What caught my attention while looking into whether or not I wanted to try my hand at Warparty was the fact that you fight alongside dinosaurs. Not many games can claim that and the console scene is rather lacking in real-time strategy (RTS) games, so I gave it a shot. Unfortunately, Warparty has the same basic functionality as any RTS, but it lacks some distinct feature to make it recommendable over others in what is a competitive industry. Sure, the existence of dinosaurs is unusual, but they function just as any other unit does and do nothing to change up gameplay.

For those who are new to the genre–welcome. RTS titles task you with gathering resources, growing a population, and defeating an opposing force–all while completing tasks generated by your chosen campaign. What sets this genre apart from 4x is the scope of your control as well as the campaign setup. Where in a 4x you have control of an entire civilization, usually with the added benefit of customization, and can choose how you want to approach conflict, in a RTS, you have control of a smaller group or faction– usually one at war with others. Where a 4x has nigh unlimited replayability thanks to procedurally generated worlds and inhabitants, a RTS will play out the same way each time–at least in the campaign.

Warparty offers three campaigns, which are divided into chapters and feature three different factions: Wildlanders, Necromas, and Vithara. They differ as far as their scripting and unit appearance, but ultimately the campaigns are pretty similar. The main difference between the leaders is the skills they can learn. The Wildlanders, for example, are lead by Mika whose skills are more geared towards combat and reducing the cost of units, whereas the Vithra are lead by Sage, who can tame wild dinosaurs and has skills geared towards utility. The campaigns can be played at one of six difficulties ranging from very easy to very hard. 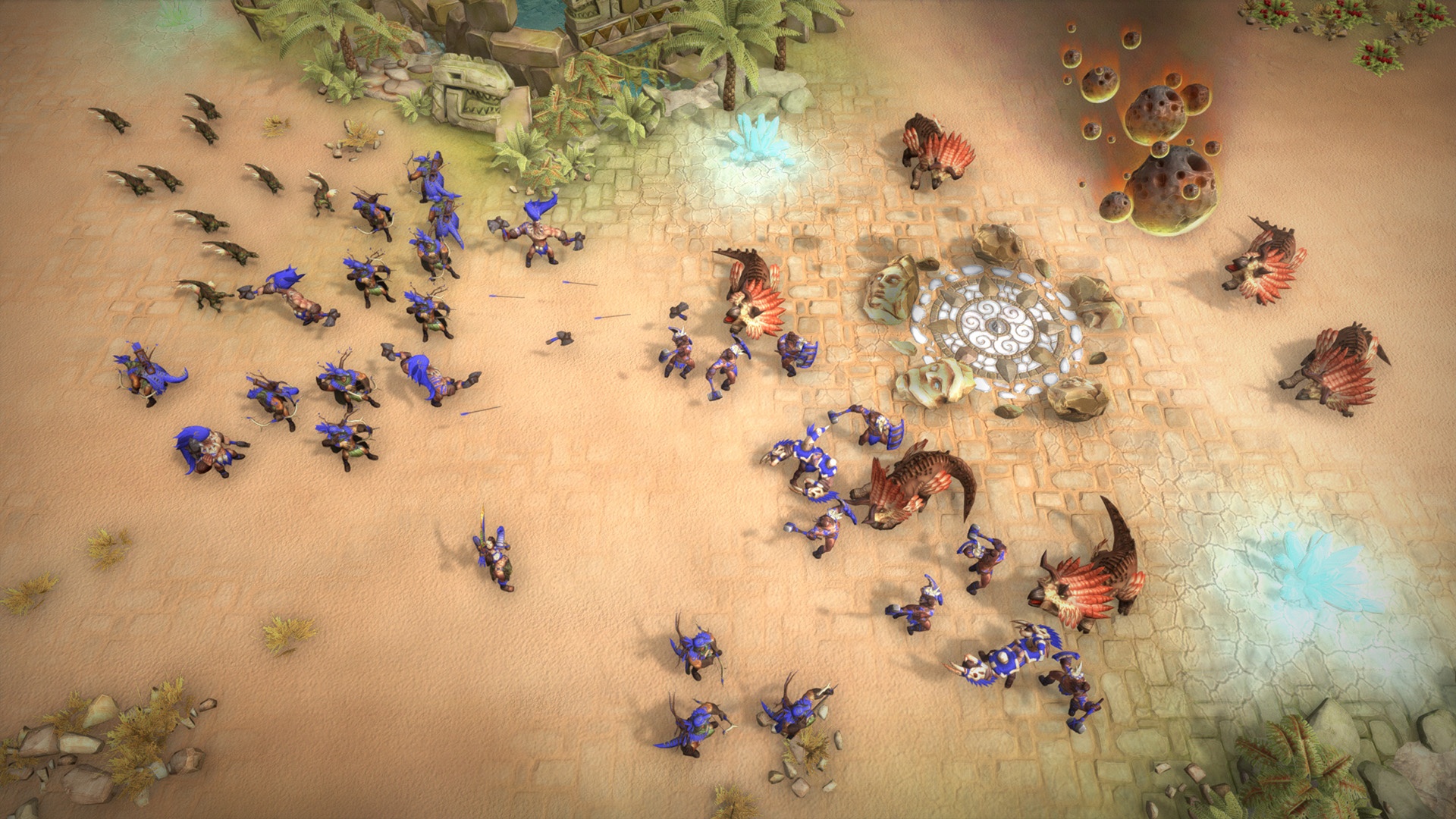 Gather. Building, populating, and using skills costs resources that you can have your non combat units collect. The most basic task the game will require of you to progress is to collect x amount of a particular resource.

Build. There are several different types of buildings, some that increase the total amount of resources or population, and others that produce units. Buildings can be upgraded and more types unlock as you progress.

Grow. As you gather resources, you’re able to produce more units. Combat units cannot gather and gathering units cannot fight, so a balance between the two is key.

Develop. During the course of the chapter, you’re able to research upgrades for units and buildings as well as learn new leader skills.

Conquer. The enemy will be doing all of the above, making it a race to see who can manage it more expeditiously. Once you’ve gathered enough manpower, you can destroy the enemy base and move on to the next chapter.

You can pan around the map using the thumbstick and select units or buildings with x. The selection tool leaves something to be desired when attempting to highlight more than one unit due to the fact that holding x causes the circle around the cursor to expand, selecting whatever is within its radius. This means if you have units bunched up, you’ll have to pick individual ones and move them away from the group you’re trying to target. The UI is also not scaled well, taking up a lot of the screen when at default size, but becoming too difficult to see when shrunk.

There’s also a skirmish mode, where you can play against an AI or human opponent online without having to worry about bothersome tasks, and a survival mode, which has you facing off against waves of enemies. Both modes have their own leaderboards, so if you’re the competitive type this may interest you. 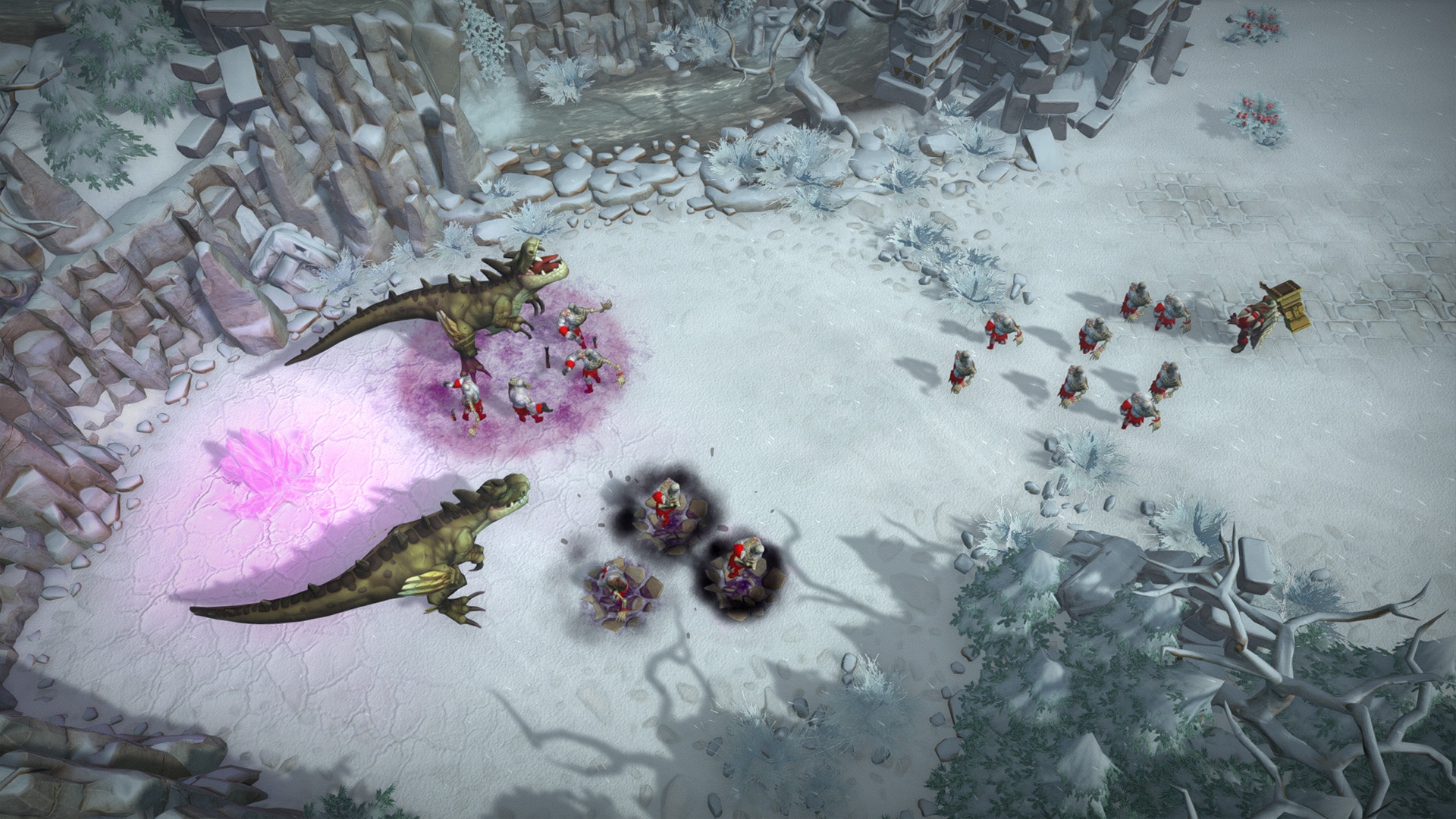 As far as atmosphere and presentation go, I’m sure the character models look great, but you can’t zoom in close enough to actually appreciate them. Which is a shame considering there are characters that ride into battle on sabertooth tigers and triceratops and enemies like T-rex’s that would be awesome up close and personal. Music isn’t anything to write home about. Some of it sounds sort of tribal with drums and the like and for the most part it just fades into the background–partially because of how frequently the characters jabber. This wouldn’t be an issue if they were saying things worth hearing, but the way my character recycled his or her catch phrase whenever selected drove me batty. And then there was that darn eagle shriek when allied units engaged in combat–ugh!! The character voices sounded like a low budget recreation of the Muppets, which caused an odd disconnect when coming out of the mouths of fearsome warriors.

Warparty is a good idea with subpar delivery. It fails to hold the attention of the player and therefore devolves into repetitive and shallow gameplay. You can do better in terms of RTS games at this price range–in terms of both level of engagement and polish.

Warparty is set in the Stone Age and that’s the most interesting part of the game.