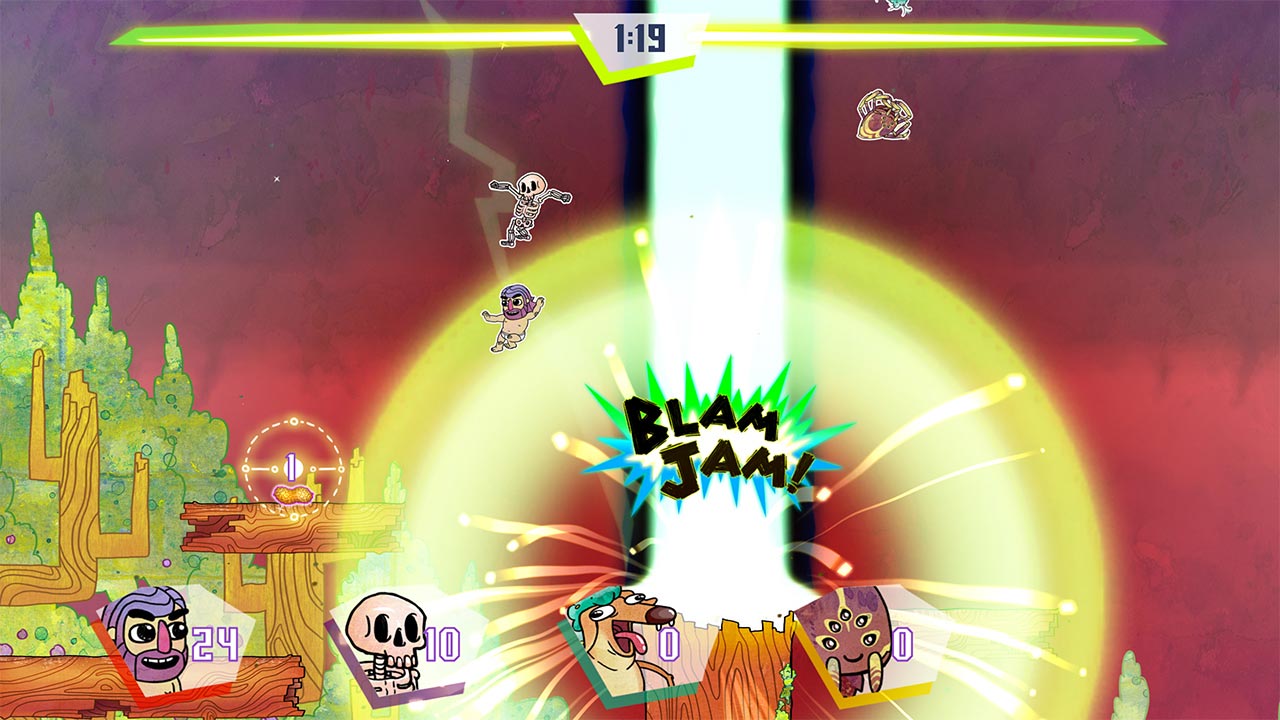 At some point, we have to accept that certain titles need to have MORE in order for them to work. The PC AAA community is finally getting over a nasty case of “online multiplayer” infecting their titles, and seeing a return to form for actual campaigns and single player enjoyment. Again, this isn’t about removing multiplayer entirely: you just need something that isn’t a total slap in the face to keep people entertained when they either have no good Internet connection or simply hate going online and trying to find other people to justify their $60 title. The Nintendo Switch is seeing a little something similar in the form of local multiplayer backbones. Playing with friends is great, especially if you can get them into your domicile (or you to theirs), but it shouldn’t be the entirety of the game. For Bread Machine, makers of Slam Land, they seem to be sincerely banking on you being able to have friends on hand to justify their title.

There isn’t a story to speak of, and the devs don’t disguise this, either. The store page makes it seem as though the entire concept is oddball enough to justify the game’s existence, and we go from there. As a giant, blue humanoid looks on in the background of several stages, you have to choose one of several characters and set out into a game of slam. This game is played by grabbing another player and, in a very limited window of time, throwing them into a gaping maw of some kind, be it a volcanic chasm or a monster’s mouth. You, naturally, don’t want this to happen to yourself, so you run around, dodge, and even use a jumping uppercut punch to ward off attackers/stun would-be slam points. There are several game modes, but they all revolve around slamming, so get good at that and go from there. Slam Land makes sure that, regardless of how many times you play, the player holding the controller has to run a quick demo to prove they know what they’re doing. If that sounds mildly annoying, you’d be right, and it only gets a bit rougher from there, 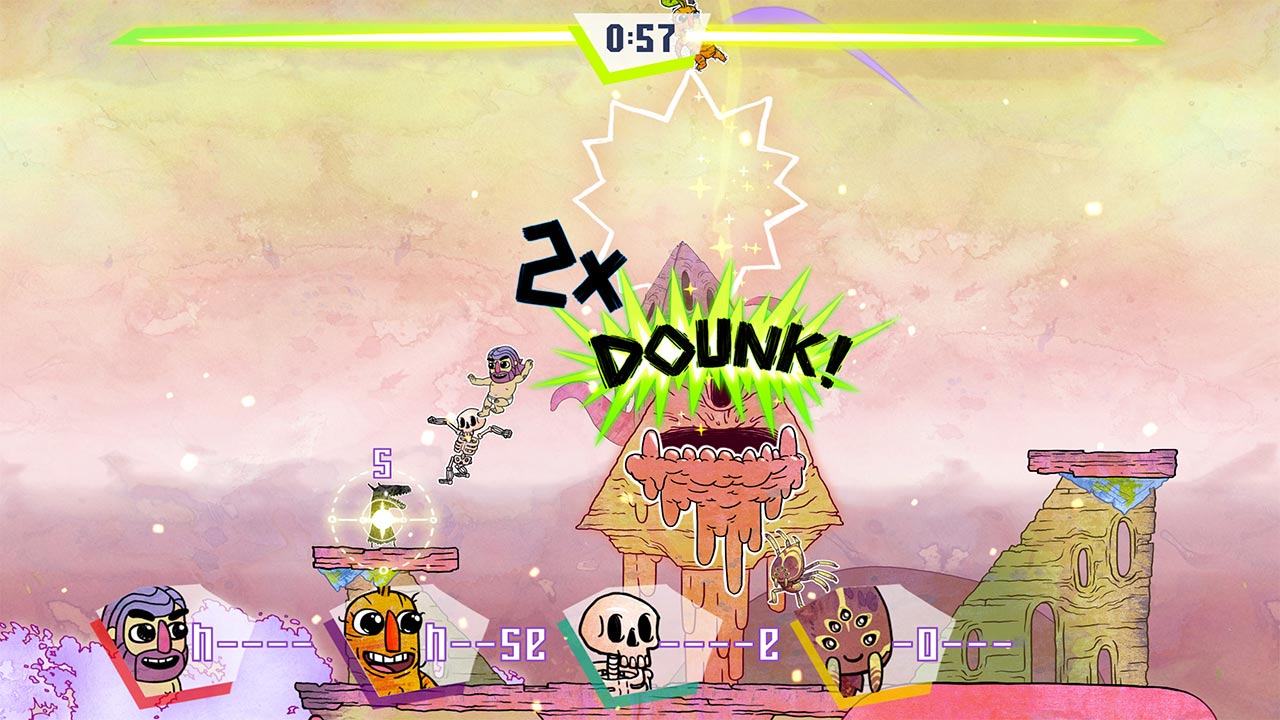 To their credit, Bread Machine delivers consistently on the core concept of Slam Land in a very expansive manner. For one, the different modes of the game have some nice variety and interesting engagement, Sure, there’s the main “Slam Tour” that acts as a pseudo story mode and engaging narrative for the gang you’re participating with, but there’s also some quick slams to get in fast practice. There’s Peanut, which is a slam-based hot potato take, rewarding those who are able to hold onto the peanut longest to get maximum points before slamming it. Horse is a creative take on the mission statement, having players try to spell horse by grabbing different letter horses that spawn and slamming them before the other players can finish their own words. Trash, my personal favorite, encourages players to try and grab up to four bags of garbage at a time and slamming them into the hungry jaws of an ever-moving tunnel worm. Anything that lets players continue to slam while removing some of the caveats of the main game identity really work well, and I would have liked to see more mini game modes to this tune to make the game further engaging.

Additionally, Slam Land does keep in tune with the “wacky” tonality that it sets from the very beginning. Each character that you can select (humanoid, dog, giant spider, skeleton) has a fair number of skins to choose from in order to separate yourself from your fellows, and the artistic direction keeps it fresh, visually catching and interesting. The levels do have a decent amount of changes between them, though a majority feel like a sort of “edge of Neanderthal” design with the mountainous cliffs and underground caverns. It keeps the environment from growing too dull, and Slam Land succeeds on keeping players locked in with strange but not grotesque designs. There isn’t much to write home about in the audio department, however, and some early, LOUD voices encouraged me to use the very limited options menu to disable both music and SFX at my earliest convenience.

As for gameplay itself…Slam Land is very simple. Very, very simple. You move around, you jump (double jump when not carrying someone/thing), can do the strike to stun other players and, well, shoot them like basketballs. You have to pick up quickly on the invisible shot clock of grabbing someone, as you only have about two or three seconds before the timer wears off and you just release the other player. Of course, the visual effect of slamming a friend down into a pit is very satisfying, or yelling “KOBE!” As you hurl another player across the screen and score two points from it is incredibly funny. When the game lands as a multiplayer affair, it really pops, and the controls port well enough to a single JoyCon to make the multiplayer aspect work and feel very plausible. While the gameplay does get chaotic with four full players, this is greatly preferred to doing only two, since the only person you’re slamming is, well, the other person. It quickly devolves into an unbalanced load where one player has the upper hand and never lets it go, since post-slam invincibility is very short-lived. And you can keep track of yourself just fine with four players (none of the stages are very big), so it’s not a matter of management. 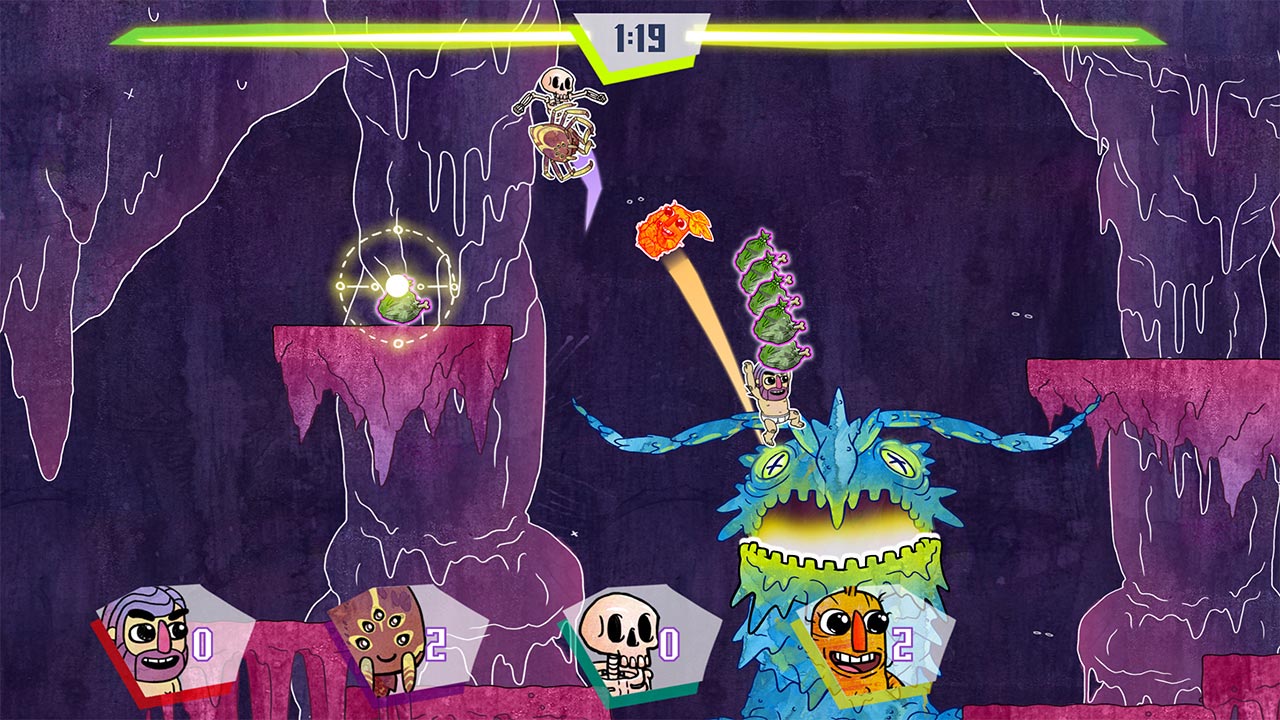 Yet, when you’re all alone, the lights really go out in Slam Land. The CPU players are unbalanced between the different modes, and it gets boring and unseemly fast. If you’re doing Slam Tour or Quick Slam, even the lowest difficulty leaves you scrambling madly to stop from getting caught in a double or triple slam (picking up someone who’s picking up someone who’s picking up someone). Then, when you change gears to Peanut or Trash, you gotta slide up the scale to the middle level because the AI feels borderline helpless when the primary goal is replaced with something else. Additionally, it’s just not fun by yourself. Slam Land runs off the energy of being able to defeat relatives, friends and even strangers through timing and luck, not skill. This isn’t something like Smash Bros or even Powerstone where you can still enjoy yourself through improvement of your gameplay. Slam Land wins with ridiculous moments that you share with other people, be they funny or frustrating, and the robot characters don’t share your level of mirth. It’s just…empty.

Bread Machine has shown some competent game building on the Switch, and Slam Land proves that they can succeed in making a title that works for Nintendo’s portable machine. Slam Land is more of a fun little side dish than a main course, but, for the price and the content, it all works out relatively well in the end. I honestly cannot recommend this to players looking for a solo adventure, and that should be inherently clear to anyone who glances at the game for more than a second. If you want something silly to add to your multiplayer library, it’s got quirk and charm, but otherwise you could probably let this bake for a while longer.

Slam Land has a good idea with a solid execution, and the unique design keeps the game going with friends, but there just isn’t enough for single play.