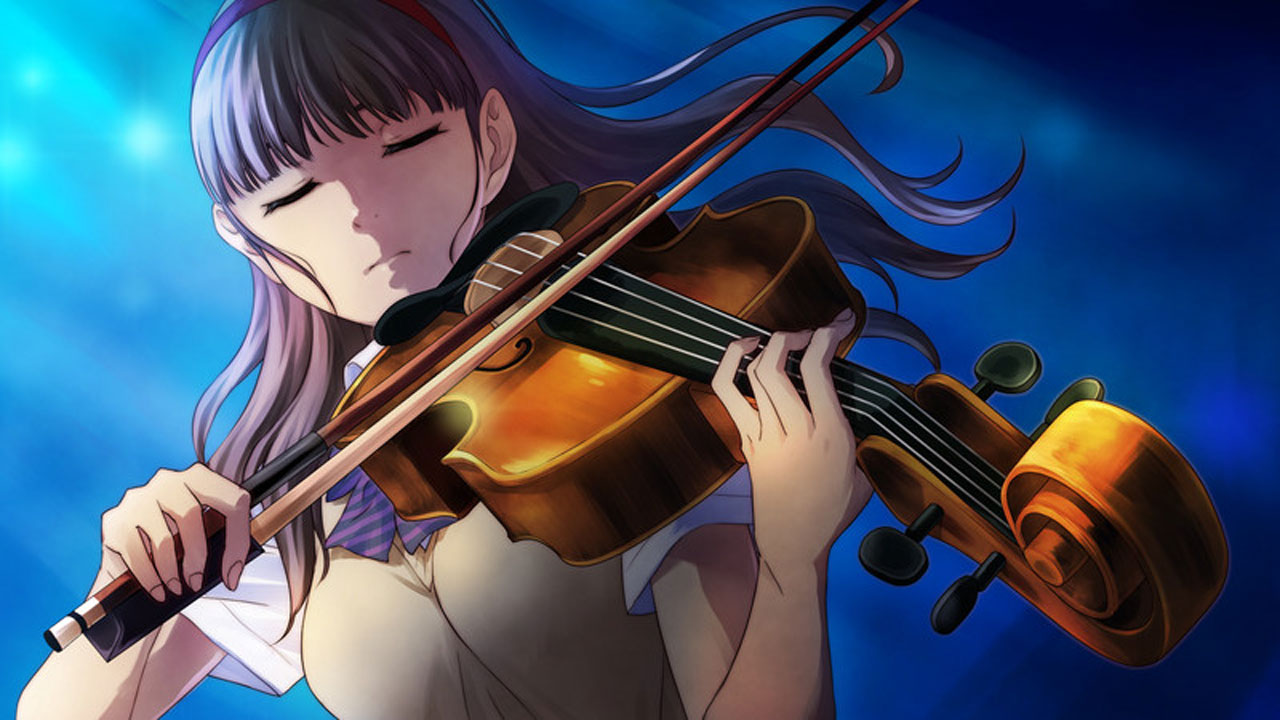 It’s really difficult to realize what a high and low it can be to really enjoy a game and then playing something else. When I was young, I was so in love with the very first Legend of Zelda that I dived, head first, with my own birthday money, into the Adventures of Link, fully ready for another amazing adventure. The result was…polarizing, to say the least. It took a decade or so before I could fully appreciate what the game was, and separate it from my previous experience. Just a short time ago, I sat down with World End Syndrome and had possibly the best visual novel play that I’ve had in a long time, which may have disproportionately set the bar for the next one. However, I don’t believe that Kotodama: The 7 Mysteries of Fujisawa suffers from being a poor visual novel or just pales next to the last game I played. I think it’s a simple matter of a core concept being haphazardly jammed into a visual novel suit and passed off as such.

With Kotodama, you play a recent transfer student to a new high school who had to suddenly leave their old school due to reasons that get revealed much later on. Inexplicably, like most high schoolers, you’ve made a pact with a tiny blue demon cat named Mon-Chan, which invisibly sits on your shoulder and slings unnecessary sass and exposition around you. On your first day, you get invited to be a part of the Occult Research Club by Nanami, an excitable girl who is determined to unravel the seven mysteries that surround their school. Aided by Wakaba, the level headed club president, it’s up to you to figure out such mysteries as the Wandering Gentleman (a ghostly apparition that moves about campus after dark), the Clock Tower Angel (will this mysterious being guide you to true love?) and the Curse of Mikoto, a whispered tale about a curse that inflicts pain and worse on students. It looks like there might be logical explanations to all of these mysteries, but only you can unlock the truth with the power of your Kotodama: exposing the minds of people you ask to unveil the truth!

Had Kotodama: The 7 Mysteries of Fujisawa just been a straightforward visual novel, that could have been one thing. In the core elements, everything seems pretty good about the title, with the exception of the length, which isn’t terribly long. Each of the mysteries represents a chapter of the game, and the first couple of chapters are over in a hot second with very little to do on your end. Basically, the main character goes around talking to people in static situations, getting clues and information as to what might be happening. You have a social media application called Quacker that adds ambience to the game by updating with what students are chattering about, but it rarely affects the game more than adding a touch of atmosphere. There are some instances of different conversation choices, but they seem to never affect what the outcome of the situation/conversation is. You can travel to different parts of the school to investigate, but, as there is no timer or dynamic window of opportunity, you just check all the places before eventually coming to a forced location where something happens. More than a couple of times, an NPC will ask you “What do you think we should do?” and then you only have one option to click, which just feels like a waste. Part of this is to make players think the game only goes one way, when, in reality, it becomes much more in-depth and complicated very, very quickly. 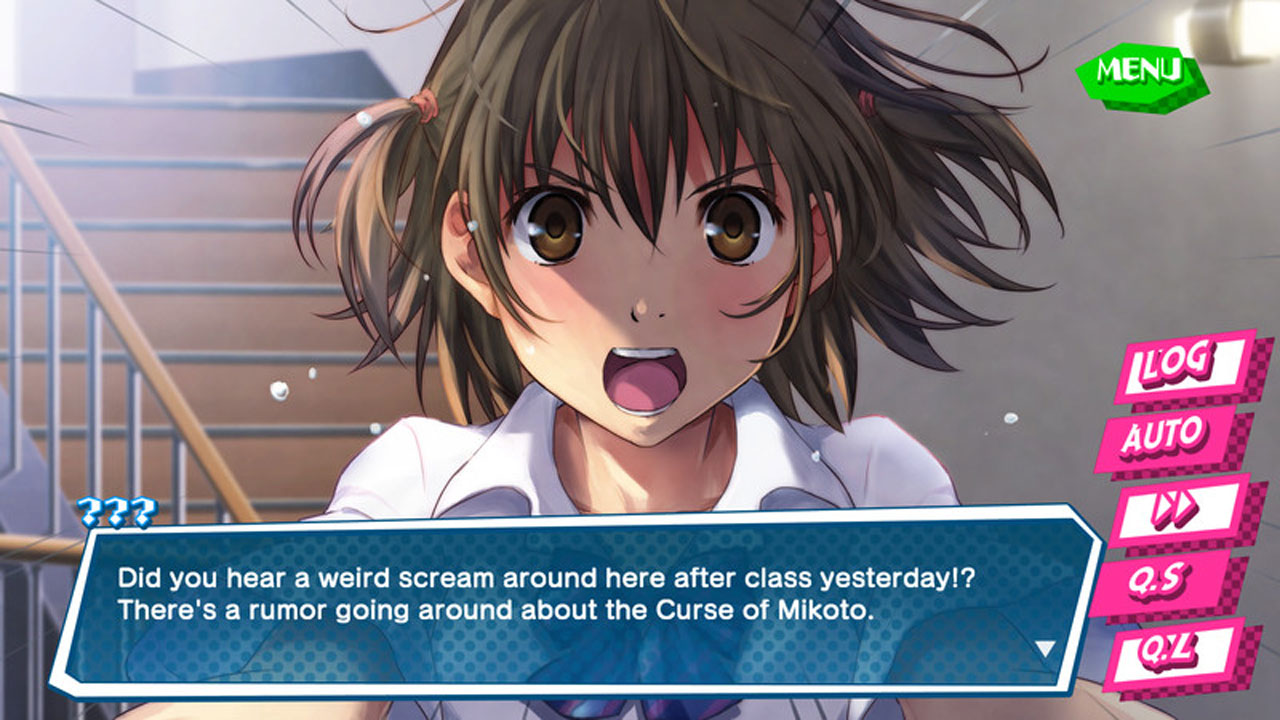 The actual plot of Kotodama is good enough, with some early on red herrings to lull you into a false sense of knowledge before taking a hard left. Then again, I’m not sure if that can be said with a completely straight face. You see, you find out the first couple of mysteries are just tall tales from students, and everyone’s like “of course they are, this is just a normal school.” But the whole time, you’re talking to an invisible blue cat demon, so it shouldn’t come as a total surprise that some things are more supernatural than you’d expect. Once the bigger twist is revealed that it’s no accident you ended up at this particular school and there is more happening beneath the surface, the actual story starts to take flight, and it’s surprisingly dark and interesting. The change of the approach feels like a spoiler, but players should know they’ll need to at least play through Chapter 5 before the real game begins. However, once you get to this point, the player may be so disenfranchised by the mind mechanic that they’re losing speed entirely. Sure, the whole game is voiced (not the protagonist), and the character designs are decent enough with minimal animation for certain emotions or situations, but it’s hard to distract from the fact that a lewd match three game is the center of it all.

When you finally confront a person or persons and need to get the truth out of them, your Kotodama skill (which you power up by generally learning new words in the course of your exploration) turns into an inner mind match three game, where a bubble you click moves to the top of the screen and everything in the row shifts down one. You have a limited number of moves to generate massive happiness on the person that you’re interrogating, and different characters are weak against different elements, so you may be able to build their happiness faster with hits from the love bubbles than the greed bubbles. As you increase their happiness, their defenses “strip away,” taking away their clothes one layer at a time till they’re in their underwear. Now, naturally, the game won’t be too easy, so, if you start to run low on moves, you can use a special attack to potentially generate more, such as a feather or an ice cube: you just need to decide where on their body will be most effective. But watch out! If you guess wrong, they’ll be mad and counterattack by doing things like preventing more happiness for several turns, or shuffling all the blocks. 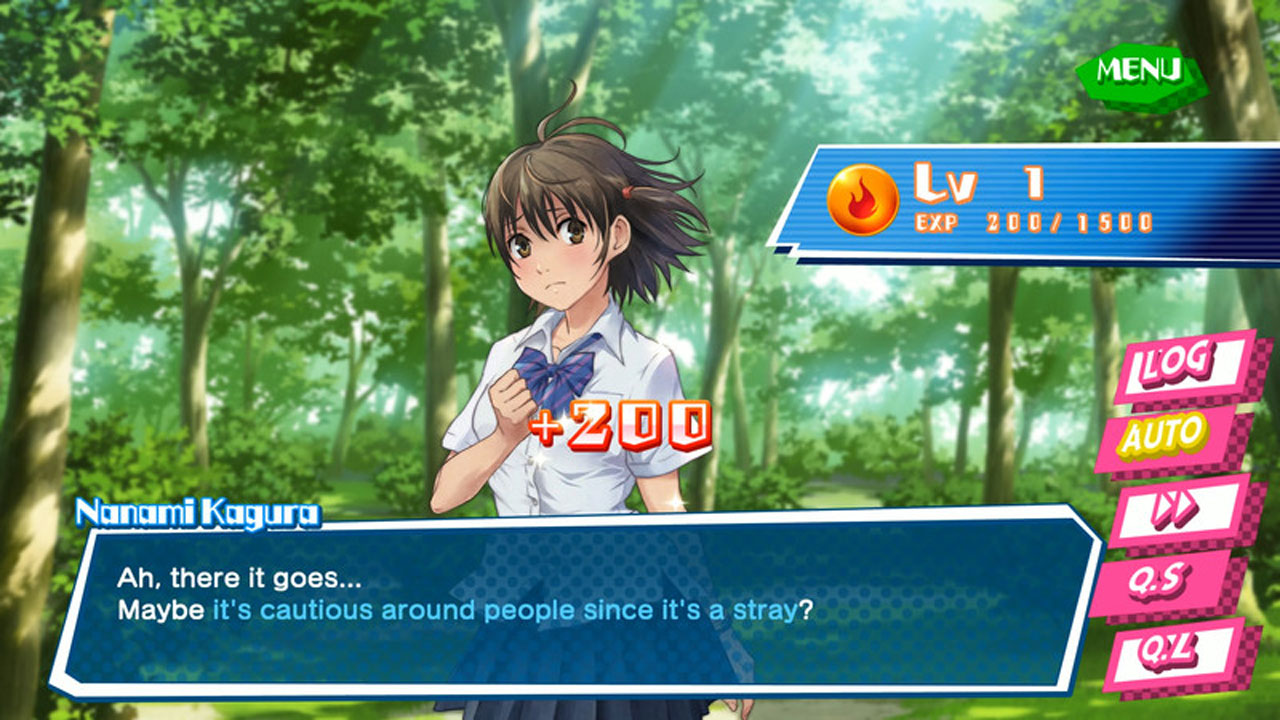 The mini game for Kotodama is the blessing and the curse for the whole title. Not only is it the main event, it’s riding this weird line of perverted and not. The characters all yell and moan when you hit them, but there’s never actual nudity. You attack boys as well as girls, which I guess is great if you want to see high schoolers of all ages writhe in your mind, but holy hell is it all weird. Additionally, you start to realize the visual novel doesn’t even care if you read it: you can fast forward through dialogue you haven’t even read yet to hurry up and get to the mini game. Even post plot-twist and the race for the real ending begins, you can ignore a lot of the repeat text and just buffalo ahead to the newer stuff. The match three handles like hell with the buttons, so you can use the touchscreen (for the whole visual novel, actually), and, once you’re done with a character, they’re permanently unlocked in the Fantasize Mode, so you can fight them again and again. Oh, and you can unlock new underwear for them, so there’s incentive to keep playing! It’s got all the charm of Reflexions or the boss battles of Moero Chronicles, but it’s working so hard to pretend that isn’t the main focal point, and it feels disingenuous as a result. Plus, there’s no real purpose to the skill up system between the levels. I mean, since everything works on a fixed rail, you can level up your powers, but that only matters if you plan on unlocking all the underwear in the Fantasize Mode, which, if you’re playing the visual novel just for the plot, doesn’t even make sense.

Speaking of the touch screen, PQube should be careful with their Switch ports moving forward. The buttons work well enough, but they feel clunky for a majority of the game and downright painful in the match game. Kotodama performs well, but you must use caution when saving. If you try to save before a character has finished speaking (or before a dialogue for a scene is loaded), it created a corrupted save that can never be loaded. I lost a lot of time as a result of needing to hurry up and save before heading out to work, so I had to sit through the first four chapters again. Which wasn’t that much of a bother since I could fast forward through most everything and just had to play the match game again. Just be careful when saving.

Kotodama: The 7 Mysteries of Fujisawa is in such a weird place. The characters are alright, and the plot is decent enough, but there’s not enough of the actual visual novel to keep players coming back more than once. The mini game isn’t exactly innovative (make four matches in a row to get dynamite and blow up a bunch of tiles, woo), but it scratches a particular itch that can’t be reached until HuniePop gets a Switch port. I’d say this is for people who are equally interested in short visual novels and really like some H-level side games. If you’re more interested in one than the other, there are other titles that could make it work, but this one is just utilitarian enough to hit two points at once.

Kotodama: The 7 Mysteries of Fujisawa Review

Kotodama is a decent visual novel in story & looks, but the stripping mini game is the clear centerpiece and may put off some while not being enough for others.