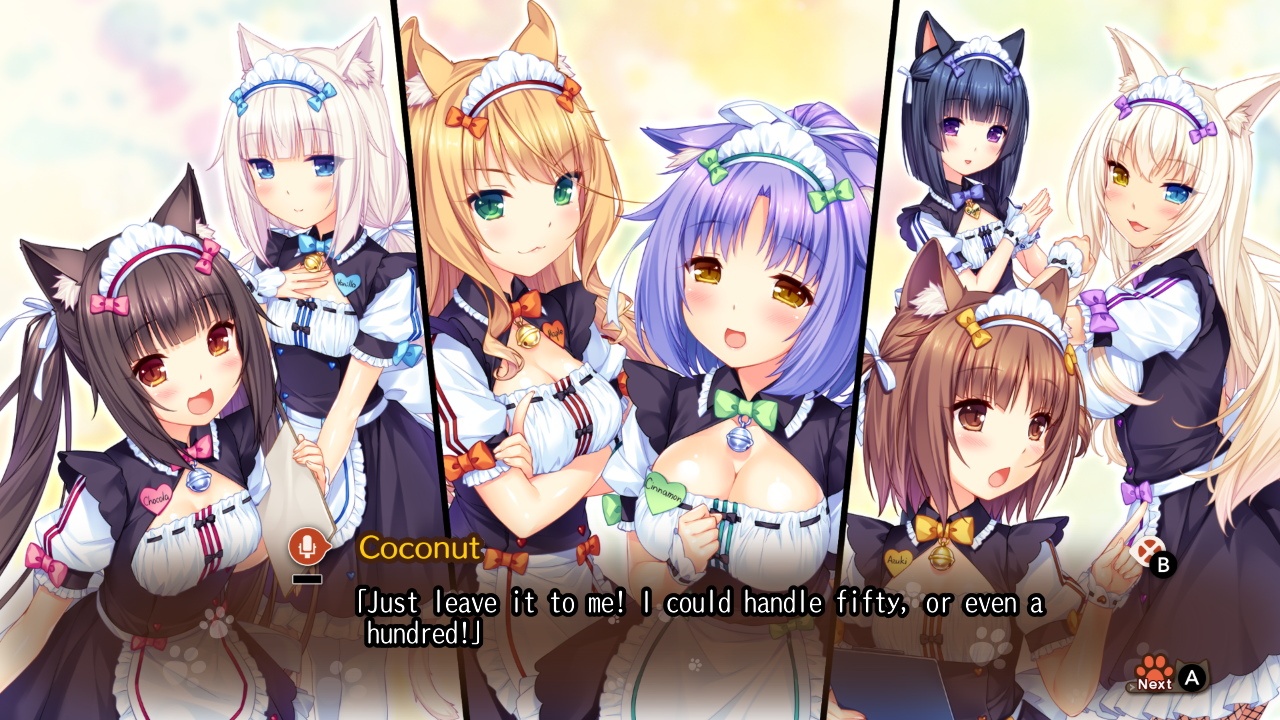 There’s probably a contingency of people that’s getting very sick of seeing adult themed titles launching on the Switch week after week. For years, Nintendo was taunted for being a “kids console,” merely because you often didn’t see the exceptionally gory or graphically violent games getting regular releases, but a lot of people saying that didn’t see the offbeat titles that the Switch got. Sure, we missed the boat on some of the Mortal Kombat iterations or Call of Duties, but we got MadWorld, No More Heroes, Resident Evil 4…things have been wild. Now, the Switch is the home to most of the big names, right down to the recently announced Witcher 3 port (seriously, cannot wait), but Nintendo isn’t stopping there. The spiritual successor to the Vita for niche fans, Nintendo proudly charges ahead with the games that really make the censors squirm. That’s right, things that vaguely mention sex, which is the real boogyman of the West, and nothing’s more terrifying to them then sexually aware catgirls. We’re back at La Soliel, we’re selling suggestive cakes, and Neko Works continues to charge up their fanbase; welcome to Nekopara Vol. 3.

At this point, you can throw out the damn script if you’re totally unaware of the plot, because either you know it front to back or you genuinely don’t care and just like the visual aesthetics of the characters. Much like the last two games, we’re focusing primarily on two catgirls and helping them come into their own and become adults, and the flavors this time around are Cinnamon and Maple. Maple, easily, is one of the most complex and interesting characters to have come out of the game series so far, aspiring for more in her life than just “being a good catgirl,” and even looking at her own station in life with attributes that could be compared to noticing racial basis or even prejudice. Far be it for Neko Works to have a game go too deep, we have Cinnamon as a counterfoil, a large-breasted, supposedly shy girl who will suddenly and inexplicably go into bouts of horny daydreaming, peeling back her demure demeanor to reveal something that’s charged and raring to go. Of course, you’ll be interacting with the entirety of the cavalcade of catgirls, so for longtime fans of Coconut, Azuki, Chocolate, Vanilla or Shigure (once again, not a catgirl, definitely your sister), there’ll be cameo appearances throughout. I also feel the need to stress, once again, this is a console release, no amount of uncensored patch can magically be obtained to unlock the H scenes that exist in the game. Sorry, the full-on lesbian catgirl sex scene is omitted, consider a refund if this was a big deal to you. 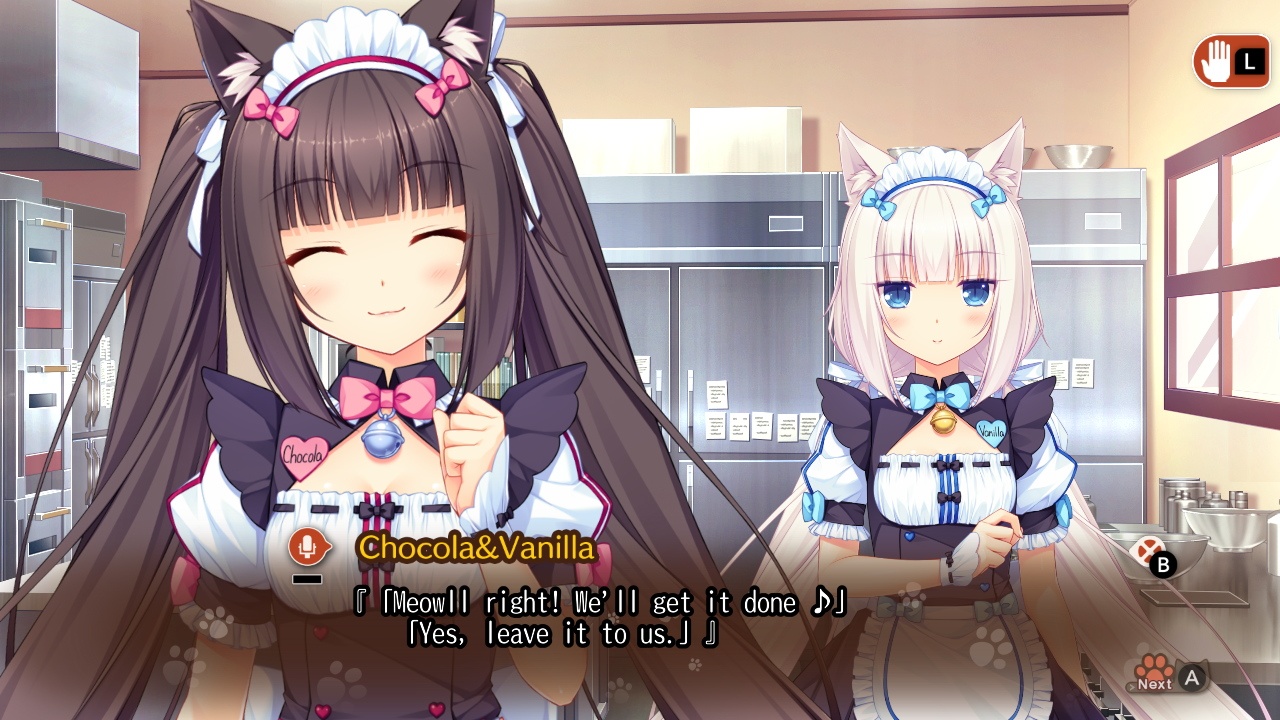 Coming into Nekopara Volume 3 is like sitting down for a viewing of The Return of the King, and I know that I’ll catch hell for that, but hear me out. If you’ve gotten through the first two movies and enjoyed them, there’s a high chance you’ll like this third one, regardless of how overlong it might be or how aimless certain scenes become. You can criticize elements of it, sure, but it still fits in the vein of the others and makes for a damn fine ride. In the same sort of analogy, you wouldn’t expect someone to sit down and enjoy The Return of the King as a standalone movie, no matter if it did win Best Picture or not. They would be confused, they wouldn’t know who anyone was, they’d want to know why we care about this or that, and it would be a headache explaining and they’d miss the best parts in the process. Volume 3 almost feels like it could be bulletproof as a result: you either know exactly what you’re getting into or you’ve got no business complaining about some of the shortcomings. Like many visual novels (especially sanitized VNs for the Switch), you’ve got to really pick and choose certain aspects in order to properly gauge the quality of the game, otherwise it’s a waste of words.

On a technical level, Nekopara Vol. 3 succeeds and elevates what’s already become commonplace within the game series. The voice acting of the characters is still top notch, with great vocal inflections, speech affectations and tons of nuances sprinkled in throughout different moments. The humor remains a high note, especially exchanges between obvious pairings (Azuki and Coconut, Chocolate and Vanilla), and keep the flow and banter light throughout. Cinnamon herself, while weaker as a character in terms of maturity compared to others (especially compared to Maple), uses her sudden onsets of arousal with lethal amounts of laughter, especially with needing to look up something online that she can’t look up at home. Then again, walking in on Maple in the bathroom one night almost had me crying, it was so well scripted and delivered.

In the same note of technical achievement, the animation and character design (visually) has improved significantly since the first volume of Nekopara. The characters all move, bob and float along when they speak, affecting different ticks and minor movements while they speak and really selling personality through their avatars. When I look at the vast number of visual novels that I’ve played recently, I’m shocked to realize the amount of work that went into Nekopara Vol. 3 and making sure the different catgirls were telegraphing emotions and mannerisms in such extreme detail that it’s crazy to think the game goes for about ten bucks. You can also go ahead and use the tried and true “bounce slider” in the menus if you need your girls to be at attention when talking or to simply jiggle all over the place with the merest hop. Again, and I need to be firm about this, there is NO nudity patch or unlocking of the sex scenes, so, if you’re looking to get your jollies with La Soliel, you’ll need to use at least a bit of imagination. Then again, just a bit: sex is always an undercurrent, looking to drag you in at a moment’s notice. 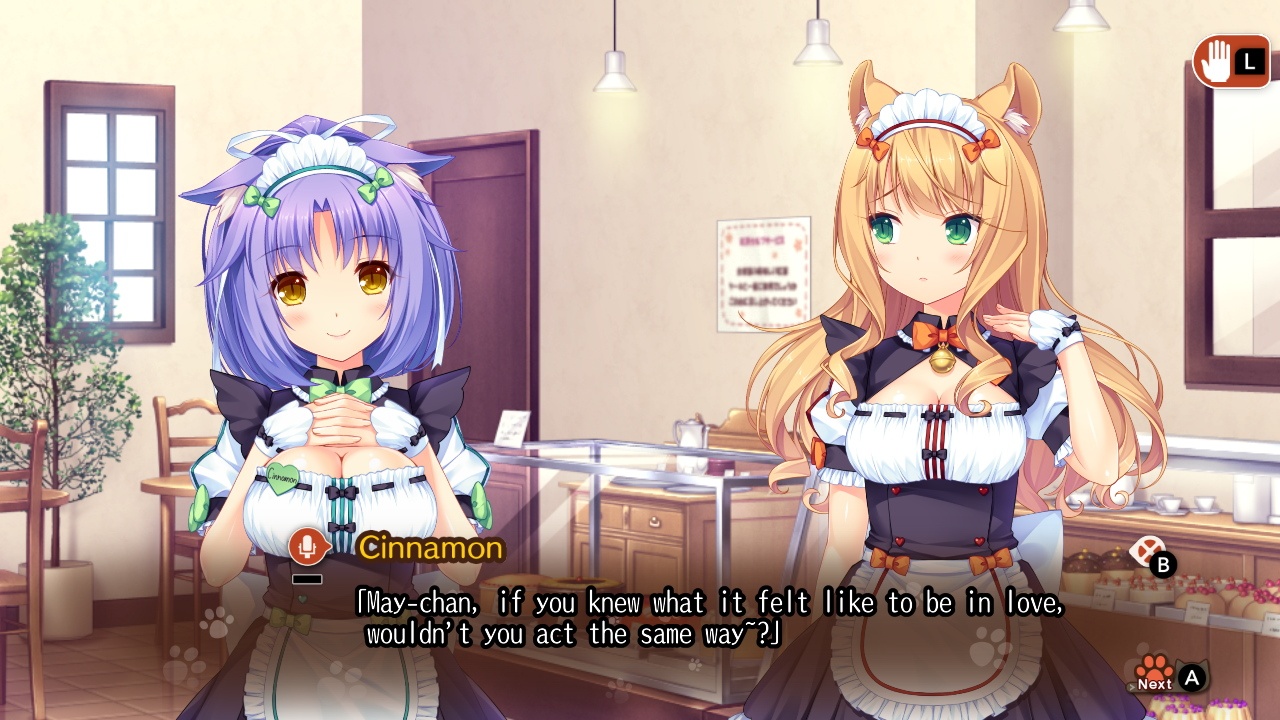 Perhaps it’s just my own perception because I last played Nekopara Vol. 2 in February (and gave it a strong but slightly scathing review), but the writing in terms of storyline seems to have spiked significantly between chapters. Sure, there’s very little obfuscation in the lead up: Shigure even mentions that you made the other catgirls happy by having relationships with them, so why not with Cinnamon and Maple? The difference, I feel, is that there seems to be more than this within the catgirls’ lives. Maple very quickly lets the cat out of the bag (*rimshot*) that she dreams of being a singer, and watching her work and struggle to try and achieve that dream, even in a small scale, felt way more rewarding than just trying to bed her as fast as humanly (inhumanly?) possible. Cinnamon is clearly one missed nap away from becoming a masochistic deviant, but her love and support of Maple is a lot stronger than the bond anyone else seems to have, rivalling even that of the original duo of Chocolate and Vanilla. The two catgirls play off each other in a big way, not running as rivals but as a heroine and her dutiful sidekick. You want to see Maple achieve her dream because it’s something greater than what life had planned for her, and Cinnamon genuinely wants to do anything she can to push her into the stratosphere. I even get the feeling, towards the end, that Maple actually has developed feeling for the protagonist, and not just the usual “I want to bed the only dude in the house” vibe. If the original game wasn’t a harem dating simulation, you’d almost feel like there was a sweet sentimentality there. Almost.

This is an easy decision for anyone who’s been a fan of the Nekopara series thus far. CFK has gotten these ports down to a science, optimizing the playback, making sure that button and touchscreen controls are tight and responsive, and preserving as much of the game as possible while keeping things kosher under Nintendo’s watchful eye. It’s a great third chapter, and, honestly, it’s my favorite one of the series to date. Funny, genuinely charming, and surprisingly poignant at times, Nekopara Vol. 3 is a great read, and could easily be picked up by others if they were willing to take five non-judgmental minutes to read some backstory before jumping into this one. Of course, with the release of Volume 3 on the Switch, the pressure is on for Neko Works and either Sekai Project or CFK to hurry up and get the long-teased Volume 4 into the hands of fans. Will we see it this year? Only time will tell, but, in the meantime, if you want some extremely tongue-in-cheek moments intermixed with cute, scantily dressed characters and unsuspecting moments of tenderness, Nekopara Vol. 3 will keep you busy for a damn long time.

Being the very best of a catgirl dating series might not sound like much of an accomplishment, but Nekopara Vol. 3 is, heads and tails, the strongest entry yet.