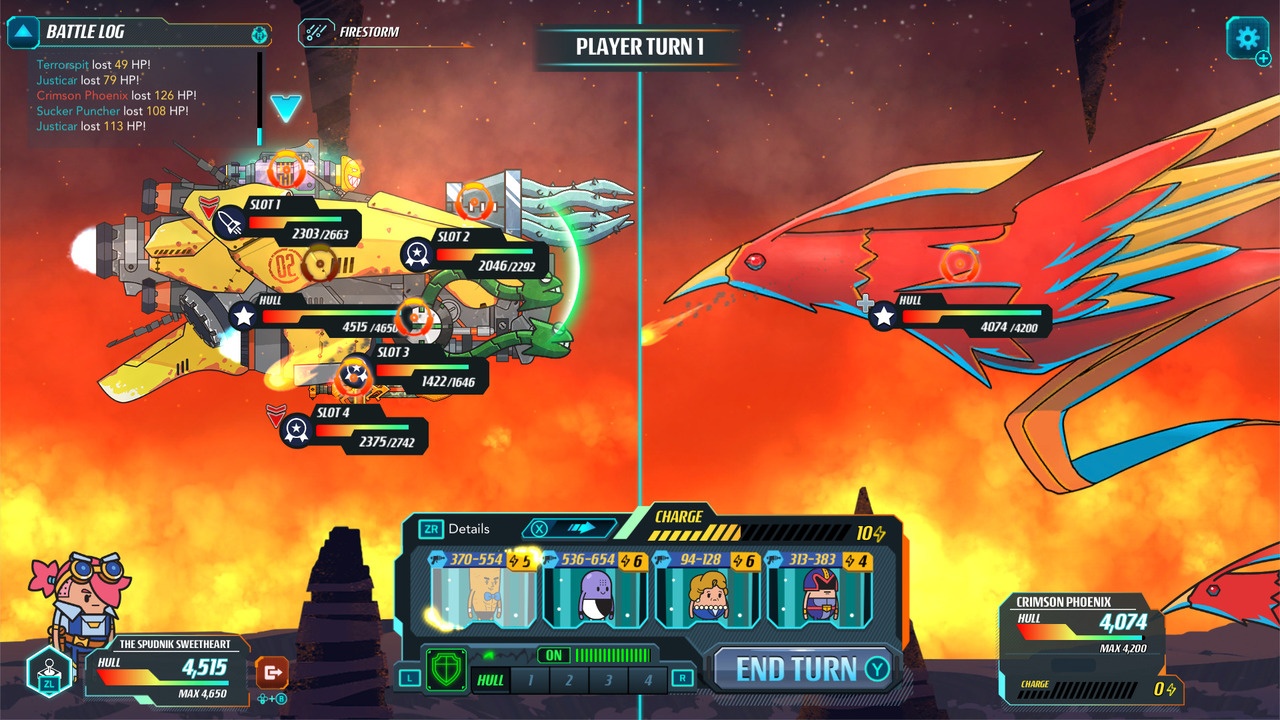 Take space exploration and add a simulation game and finish it off with…potatoes. Mix it all up and you have Holy Potatoes! We’re in Space?! Can Daylight Studios pull off a crazy combination such as this or will it fry and burn?

The story in this game is pretty solid and straightforward. The player takes control of sisters Cassie and Frey, while commanding their spaceship, The SS Yum Yum (at least that’s what I decided to name it) on a mission to rescue their grandfather from a powerful organisation known as the Eclipse. With no current leads, the sisters travel from planet to planet in search of their missing grandfather. For a game surrounding potatoes, the characters actually have personality. This is seen especially between Cassie and Frey. During lines of dialogue between these two, I found myself chuckling and smiling at the banter they would have with each other. Being the geek that I am, I loved the amount of pop culture references that were littered into the game.

The combat in the game is somewhat simple and not hard to get the hang of. The types of weapons you can have on your ship are lasers, missiles, shrapnel, rail guns and unique weapon types. All combat in this game is turn based. You select one of the weapons on your ship and either target one of the enemies ships weapons or attack the hull of the ship. I found it much easier to just take out the guns because at times the enemy will surrender and pay you cash to let them leave when they have no more offense. Depending on how powerful, each weapon takes up a certain amount of charge. More powerful weapons, the more power they demand. With each turn you have a limited set of charge, so make sure you plan your attacks out right. 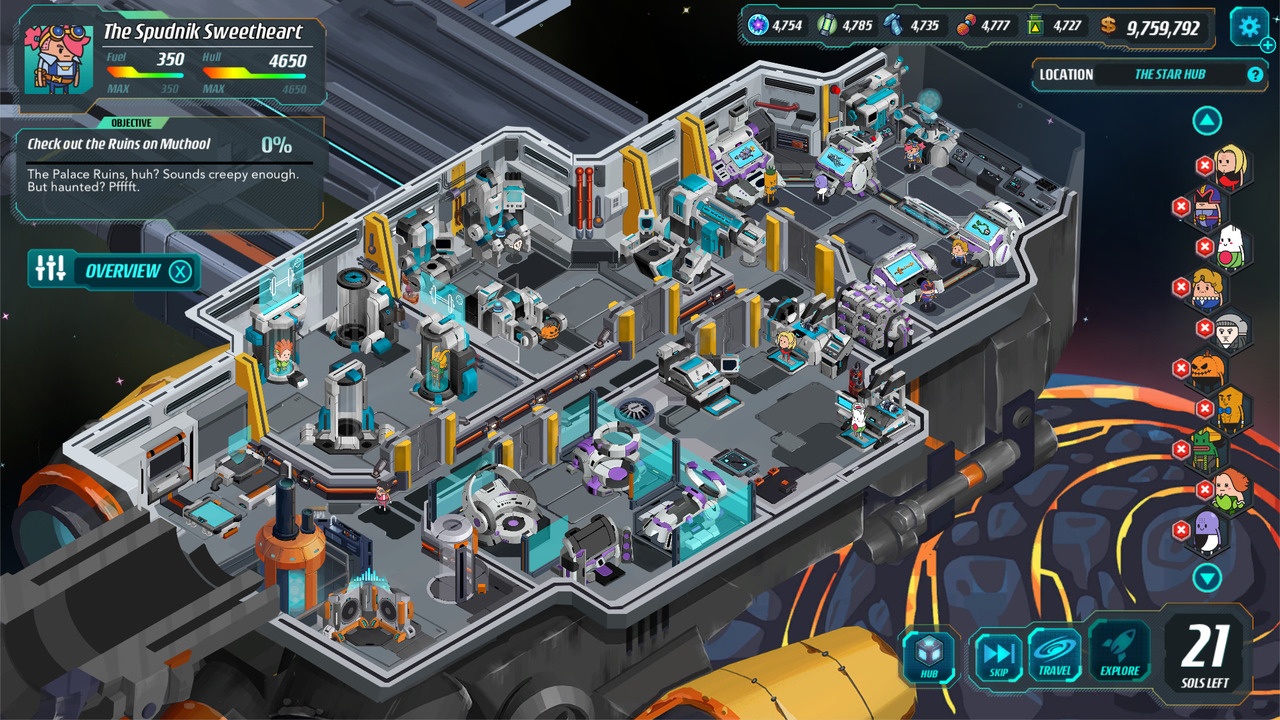 Now onto my favorite portion of the game. The characters. The reason why I love this, is because this is where the pop culture begins to shine. You can recruit character such as Saitama from One Punch Man, Marceline from Adventure Time and so many other characters that each have their own set of skills that can potentially benefit your team. Each character can be assigned to a certain weapon on a ship, hopefully one they specialize in. You are provided shields that you can position to protect a section of your ship, but if that shield goes down and a weapon is destroyed, your character won’t die, they’ll just have trauma. Send them to therapy and they’ll be back on their feet ready to fight for you.

After every battle it’s best to make a stop at the central hub to refuel and repair you spaceship. At the hub you can also buy and sell different resources, blueprints or ship upgrades and also recruit new crew members if your ship permits it. With a central hub you can easily travel to, that automatically heals your ships and grants various commodities; there must be a catch right? Well there is. You are given a small amount of time for exploration and with every trip you make it costs a SOL (speed of light), and I mean every trip, doesn’t matter where. Once you run out, it’s game over. 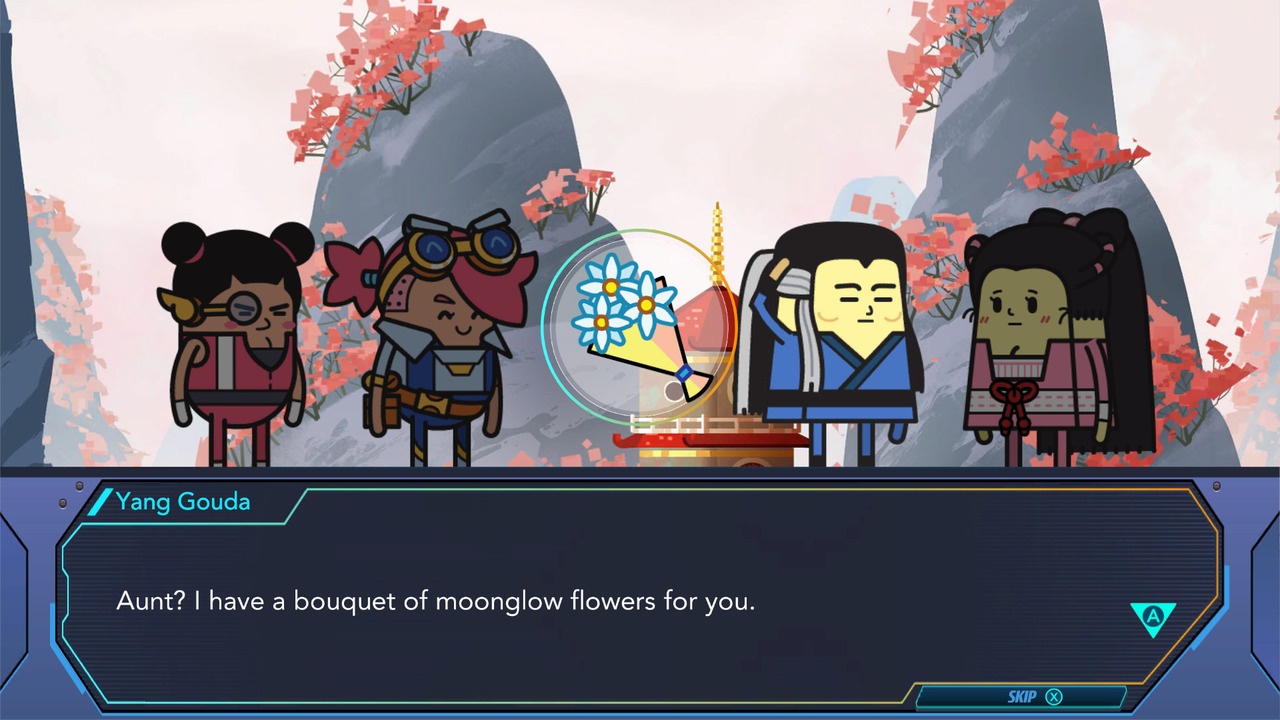 If anything I felt as if the game is kind of fast paced. In some moments after an attack turn or a cutscene, I’d be saying. “What the heck just happened?”. I also found some moments to be quite challenging and had to rethink some of my strategies, but I don’t take points off for a game being difficult. I mean, that’s why it’s a strategy game in the first place. It’s suppose to make you think.

Holy Potatoes! We’re in Space?! is a great game. It’s fun strategic gameplay, fun filled pop culture references and game mechanics made this game, for me, an enjoyable experience.

Take space exploration and add a simulation game and finish it off with…potatoes. Mix it all up and you have Holy Potatoes! We’re in Space?!