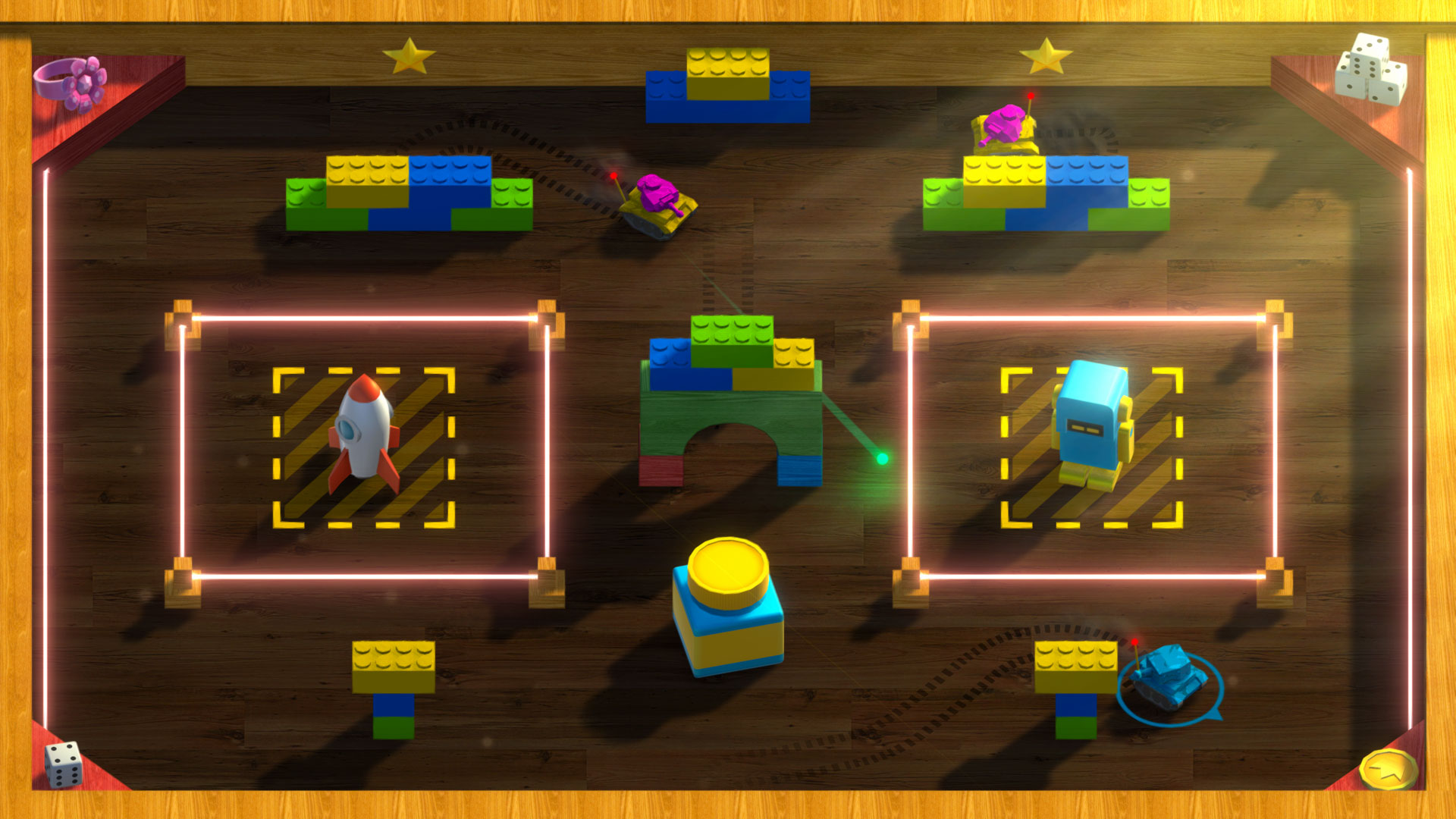 Imagine your toys coming to life and battling each other. Sounds fun doesn’t it? Well this is sort of what happens with Attack of the Toy Tanks. In this case the toys are tanks and they do battle in what appears to be a drawer of a toy chest littered with other toys. Attack of the Toy Tanks is brought to the PS4 by easy Platinum trophy developers Ratalaika Games, but this title might actually make you want to play a little more after collecting the Platinum trophy.

With Attack of the Toy Tanks there is no plot to speak of, so you just have to dive in. There are 60 levels to play with, which are all unlocked from the start, so luckily you don’t need to complete a level to unlock the next. Attack of the Toy Tanks is basically a puzzle game where you navigate your tank into a position to blow up the enemy tanks, when all the enemy tanks have been hit then the level ends and you are given a time. The further up the levels you try, then the more challenging they become with the inclusion of additional tanks and obstacles. 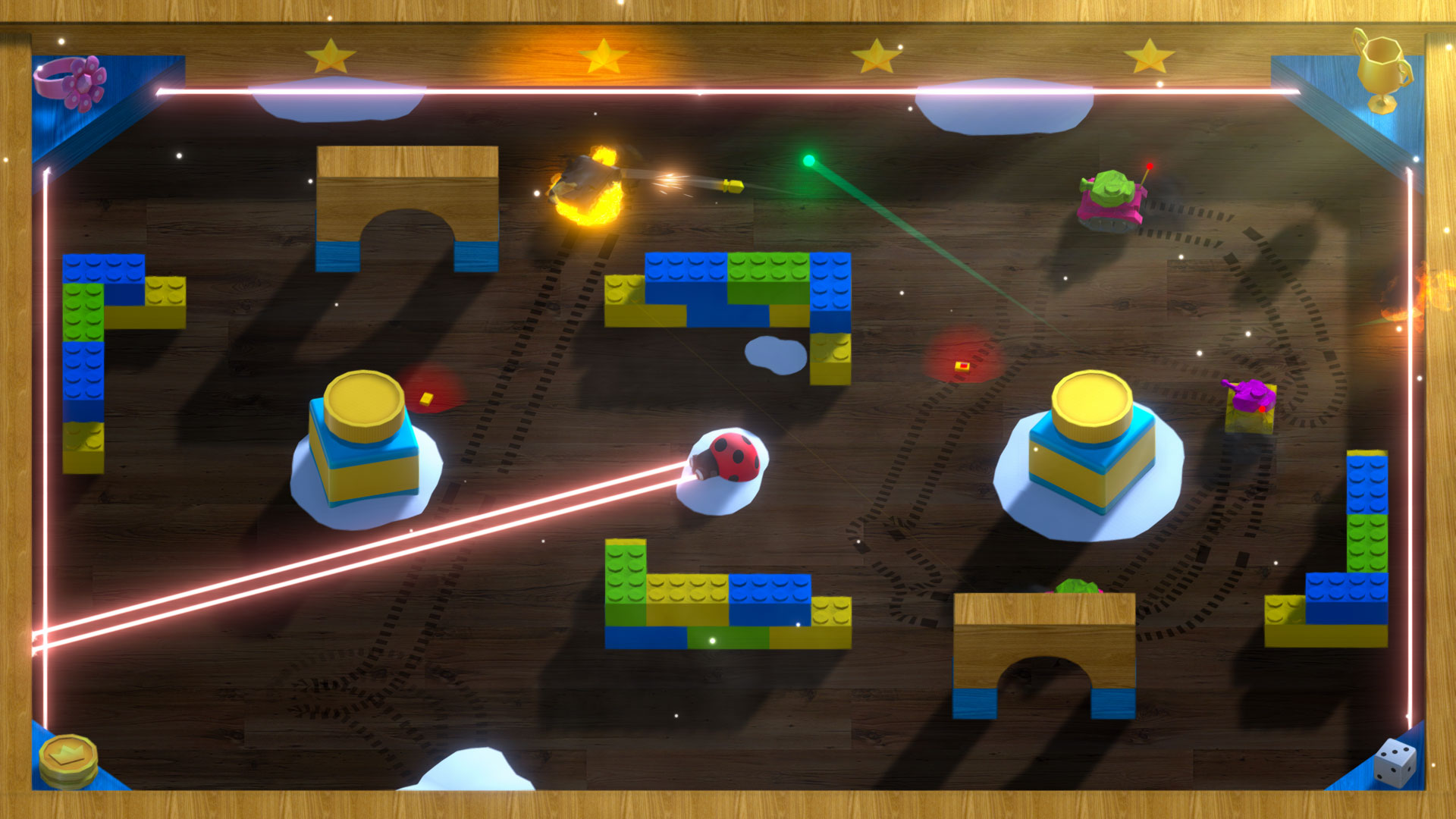 As mentioned, all the levels are available from the start. The first level is very easy, the enemy tanks do not fire so they are fairly straightforward to destroy. As you progress through the higher levels they become more difficult as more dangerous obstacles such as lasers, mines and spikes appear. Luckily enemy tank fire can destroy other enemies whilst there are a couple of levels where the enemy tanks, after a certain amount of time, will likely position themselves over some spikes at the wrong moment. You’ll be thankful that all the levels are playable because there will be a few which will frustrate you, so it’s a welcome function to try out a different level because you’re struggling with another.

Your tank is a cute little toy which shoots at a reasonable frequency. Unfortunately the controls are very much like tank controls as you attempt to move out of oncoming missiles whilst aiming at your cannon fodder. The enemies appear to be controlled by better drivers because there shots are fairly impressive for the most part. You will need to learn to navigate quickly out of tight spots and ensure your targeting is on point because if you get caught in the open you’re likely to lose. You only get one life, so if you get shot then that’s the level over, it will restart fairly quickly so you have a chance to return the favour in no time at all. Sometimes it’s worth lining up the enemy tanks in your sight because there’s a chance one of your shots might hit one of the group or one of the enemy tanks hit each other. 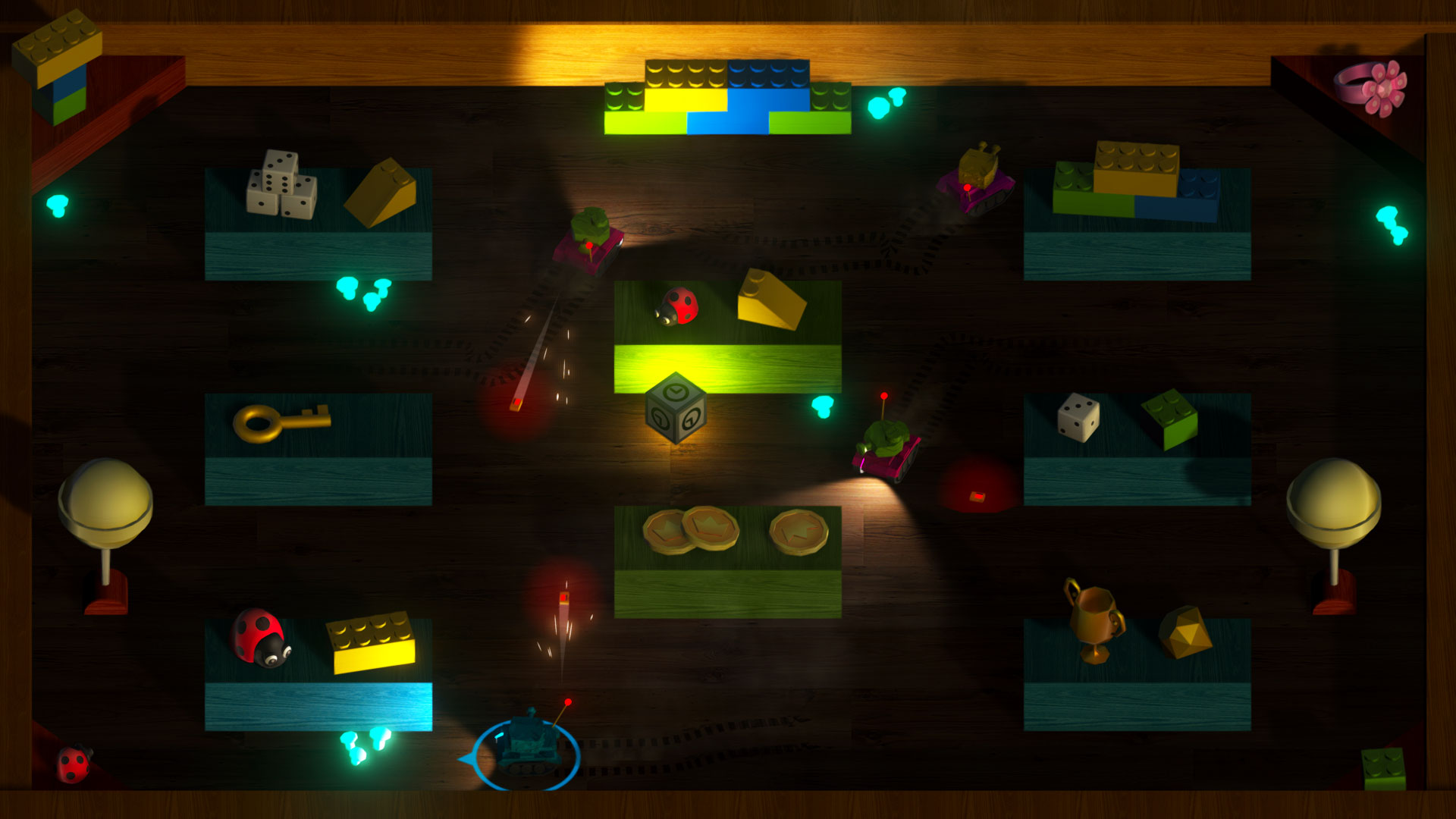 There is a local multiplayer implemented in Attack of the Toy Tanks, there’s not much to say about it besides it works fine. Graphically your tank and the environment are generally quite crisp. Sometimes there are darker levels where the only objects illuminating light are you and the enemy tanks, it’s a nice novelty element but doesn’t change the overall gameplay much. When you destroy the last tank you need to be aware there is a little delay in completing the level, so make sure you dodge any incoming fire otherwise you’ll be blown up before completing the level.

Attack of the Tank Toys Review

Attack of the Toy Tanks is your opportunity to live your childhood fantasy as a Toy Tank.