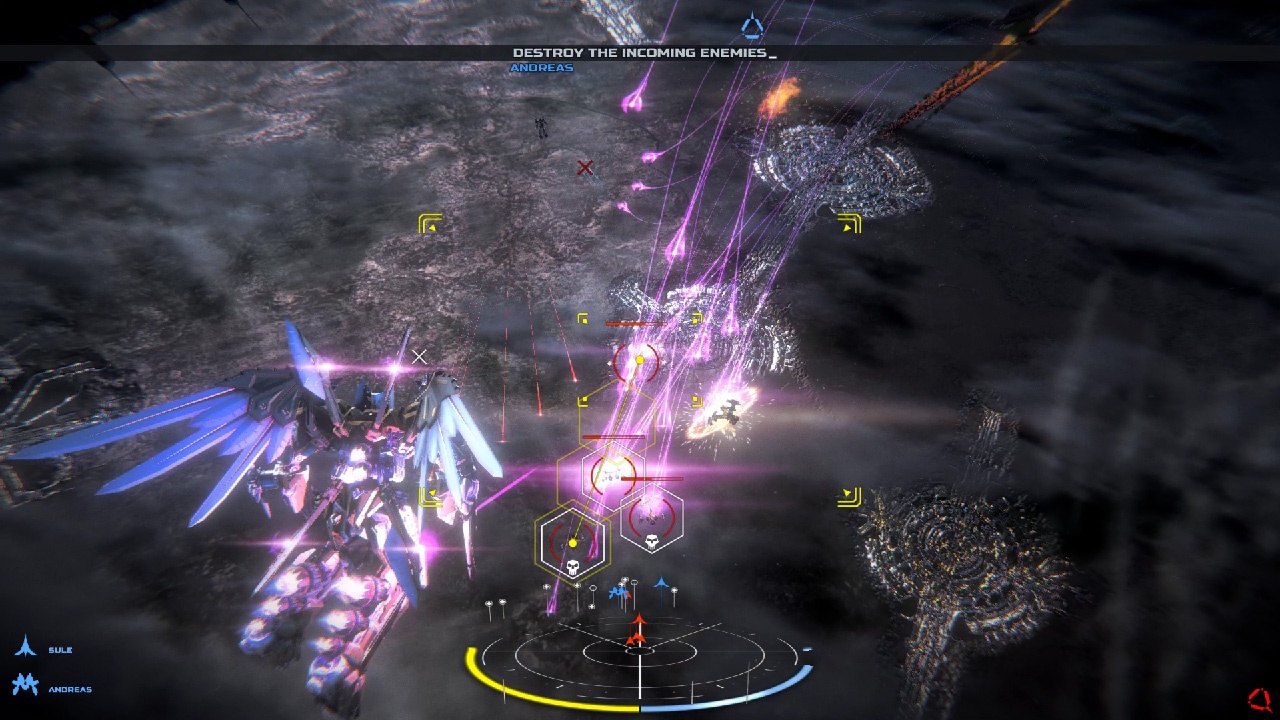 There’s a distinct difference in cultures when it comes to the East and West. It’s something that is prevalent when comparing video games from each of the respective continents. Eastern cultures focus more on relationships and anime productions, whereas Western cultures are more action-orientated within realistic worlds. So what happens when the two merge together? Well, we’re about to find out as War Tech Fighters, an action adventure game that combines Japanese anime with Hollywood blockbusters, as it launches a release upon the Nintendo Switch.

Developed by Drakkar Dev and published through Blowfish Studios, this space action and combat game focuses on piloting giant mechs with an array of weaponry, as you fight to hold back the threat of the evil Zatros Empire and their plans for domination of the galaxy. You play the role of Captain Nathan Romanis, a pilot within the specialist unit of the War Tech fighters as you embark on a series of missions that sees you protecting your fleet, mining for resources and flying a series of incursions. There’s a fairly decent story here, told through a variety of crew interactions that mixes well with the on-screen action and general gameplay of the title.

The real lure of the game though, lies within its combat mechanics and a staggering array of customisations in how you outfit your mech. It’s presentations has a distinctly eastern flavour to them, but the action contains all the explosions and excitement of a blockbusting movie. It’s the little touches, such as launching your tech from inside your carrier to viewing the myriad of options available to you from inside the hangar bay. It all adds to produce quite an immersive feel and that you are actually taking part in something big. It’s also here where the game excels, giving a superb feel to the mechs themselves. Weaponry feels suitably punchy and powerful and you get a real sense of the behemoth sizing of the mechs involved. 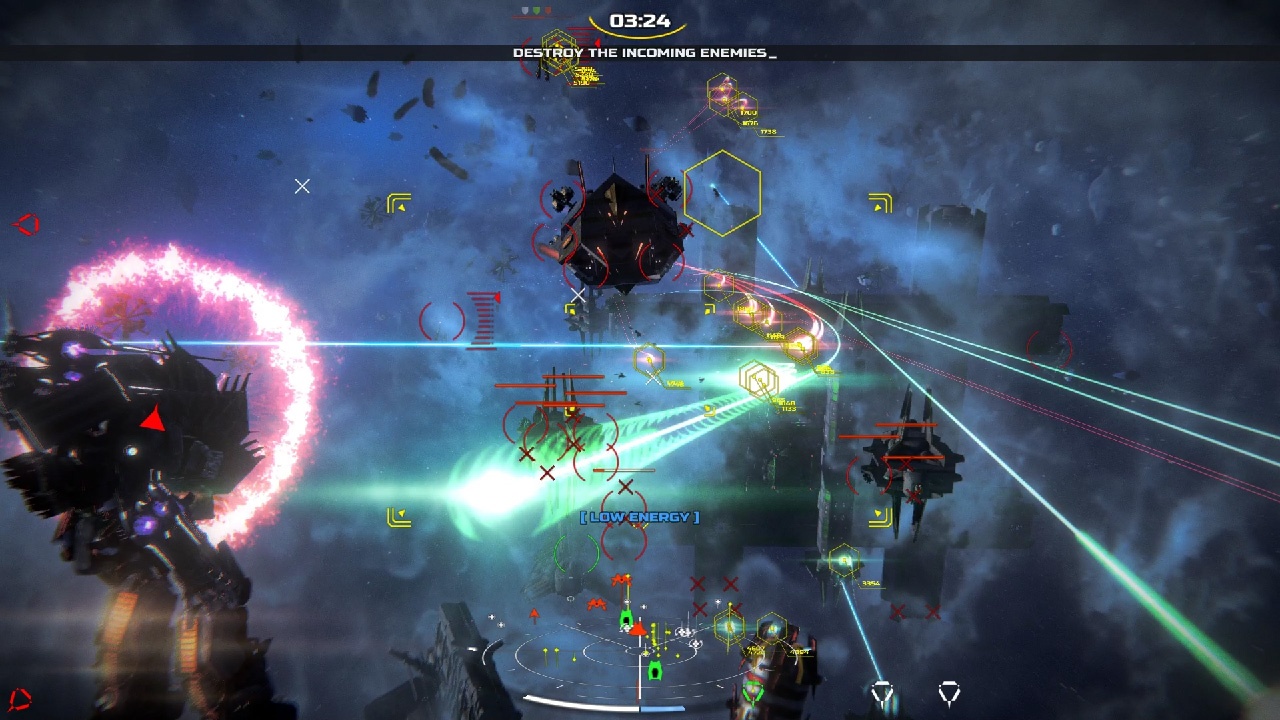 The combat itself contains the usual arsenal of weaponry, from rail guns to missile launchers. However, armed with a sword and shield, you can also get up and close through melee combat as you fight one-on-one with other enemy mechs. The opposing forces are also made up of starfighters, which when their health is significantly reduced, allows you to enter brief cutscenes as you pluck them from the skies to slice them in half or crush them into obliteration. This method of disposable also rewards your mech with much needed resources to maintain your levels of energy and health. It’s all very satisfying to watch as you feel a real sense of power and domination within the voids of space. Saying that though, the melee sections of combat are significantly weaker than its other elements, although they can still produce an quality of excitement with their premise.

There are a large selection of mission variations and options with which to play, from the overall campaign to replaying previous missions. You can even undertake a series of training missions that act as a tutorial of sorts, as well as take part in a series of challenges and survival scenarios. The real beauty lies in the staggering amount of customisation and outfitting that takes place within the busy environment of your carrier’s hangar bay. You begin the game with a choice of three mechs to choose from, each one varying in specific stats that relates to armour, shielding and combat ability. However, whichever model you choose, you aren’t always necessarily stuck with the base model of your mech, as you can research, upgrade or equip your mech with ever-powerful weaponry and abilities to significantly change its base values. 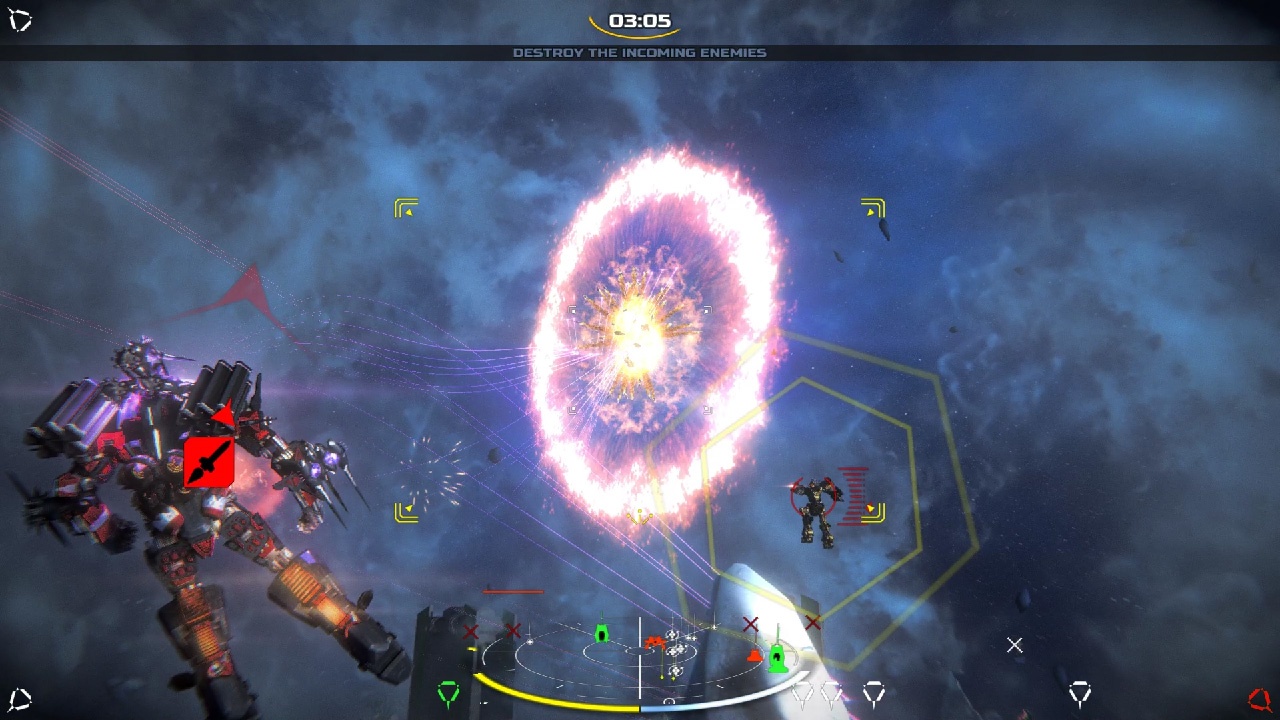 Everything is here, from the aesthetical presentation of your mech, choosing from colour codings, patterns and liveries to equipping limbs, weapons and abilities that affect offensive and defensive capabilities, as well as energy consumptions and shielding properties. The level of customisation available to you is simply staggering, as is the presentation of the whole affair that contains an immersive quality. It all adds to produce an air of longevity to the gameplay and outfitting of your mech, plus creates a valid reason for playing through the various combat missions as you constantly strive to upgrade and enhance the power of your mech. Each of its elements excel on producing an adrenaline-inducing rush of exhilaration and excitement. Everything is fast-paced, punchy and alluring in what it sets out to do.

Despite its exciting gameplay and quality though, this is a game that unfortunately does contains a few faults too, although some of these largely depend on how you will be playing the game. Originally a PC game, this port contains the same presentational values as its original iteration, As with a lot of PC ports, the on-screen text is woefully small, especially when playing on the Switch’s handheld mode. There’s nothing particularly unreadable here, but it’s certainly eye-squinting stuff. The control scheme, especially in the movement of your mech can be a little clunky too. However, given time, it is a control method that can eventually become accustomed to.

Overall though, War Tech Fighters is a fun game that contains a good level of action and excitement. There’s more than enough content here to guarantee its long-term appeal, as well as a whole host of options to ensure that you remain focused and fixed on the gameplay. Where the game really excels though, is in its method of portraying a real sense of power with the firepower of your mech, exciting combat skirmishes and an overall feeling of foreboding with producing the perfect scaling of the behemoth of your mech. Out of all the mech-orientated titles I have played, this is the first one that actually made me feel the true size and scale of such gargantuan beasts. If you’re a fan of sci-fi or the mech genres, then you’ll find a lot to satisfy here, equally so if you’re looking for a blockbuster title that perfectly replicates the formulas of Hollywood-style movies. All-in-all, you’ll be guaranteed an explosive time.

War Tech Fighters is simply one of the most satisfying mech shooters currently available on the Nintendo Switch.