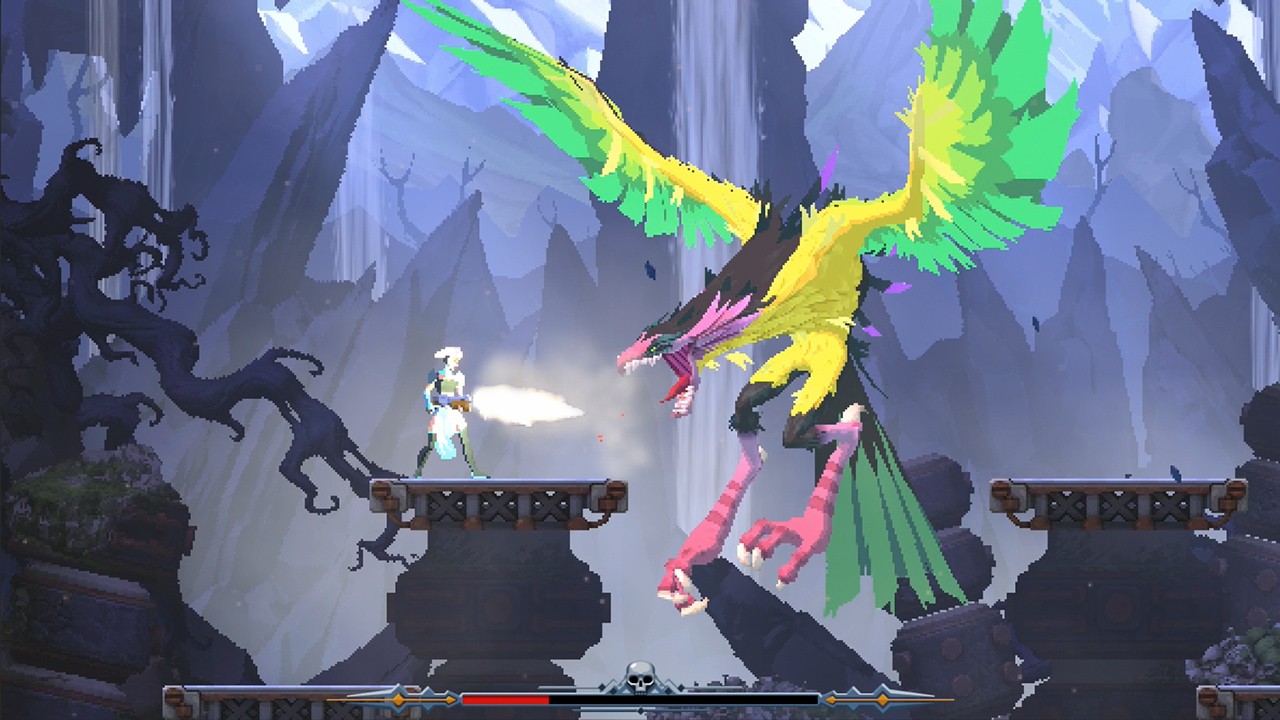 There are people out here telling me that exclusivity is wrong and bad. People frigging hate that so many titles are being locked into one console, one storefront, one way to access them, and I can see why. Frankly, I love the idea of Horizon: Zero Dawn, but I don’t have a PS4, I don’t have a good enough PC to play it and I don’t plan on purchasing either. But Mario has always been the king of exclusivity, with Nintendo fighting tooth and nail to make sure their plucky plumber doesn’t go ANYWHERE unless they sign the permission slip. So, while I understand people are frustrated with Epic and what they’ve done by locking down certain games, I can’t totally hate it. Atomicrops went through so much development, while it was exclusive, and now it’s one of my favourite roguelites for long play efforts. So, while people might be upset that Big Blue Bubble is keeping their action hack-n-slash looter Foregone with Epic until early next year, I gotta say: I get it. And I love this game.

Set in a pseudo-post apocalyptic setting, you are the last weapon and final chance for the people of Calagan, a city that has already been ravaged by war and is now facing a new threat. An entity known only as the Harrow is now assaulting the world around you, bringing with it fearsome minions of great and small size, and there is something else there: an echo of the past that everyone thought (or perhaps prayed) was dead and gone. There is a lot of story to unpack within Foregone that you can figure out through the textbooks and inner dialogue of The Arbiter who is our protagonist. To be honest, though, I didn’t pay a ton of attention to the story: I was way, way too focused on the gameplay itself.

From the drop, Foregone is a 2D side – scrolling action game with an RPG style of upgrades and crafting to help give the game a shade of choice and independence. As the Arbiter, you are outfitted with several weapons and skills, some of which you get more as you progress. For example, you pick up a double jump fairly early on, and add an air dash after I think the first boss. You get skills that can be assigned to the ZL or ZR buttons that are incredibly useful and recharge through combat, which can make you an absolute wrecking machine. You get a ranged and melee weapon, can find multiple versions of each dropped by other enemies, and also pick up armour and accessories that can add additional abilities to you passively, like extra health, certain status damage components and even faster recharging bars of skill. You can dash, you can dodge, you can jump and strike and all that jazz. You are, after all, the Arbiter, and your job is to positively kick ass. 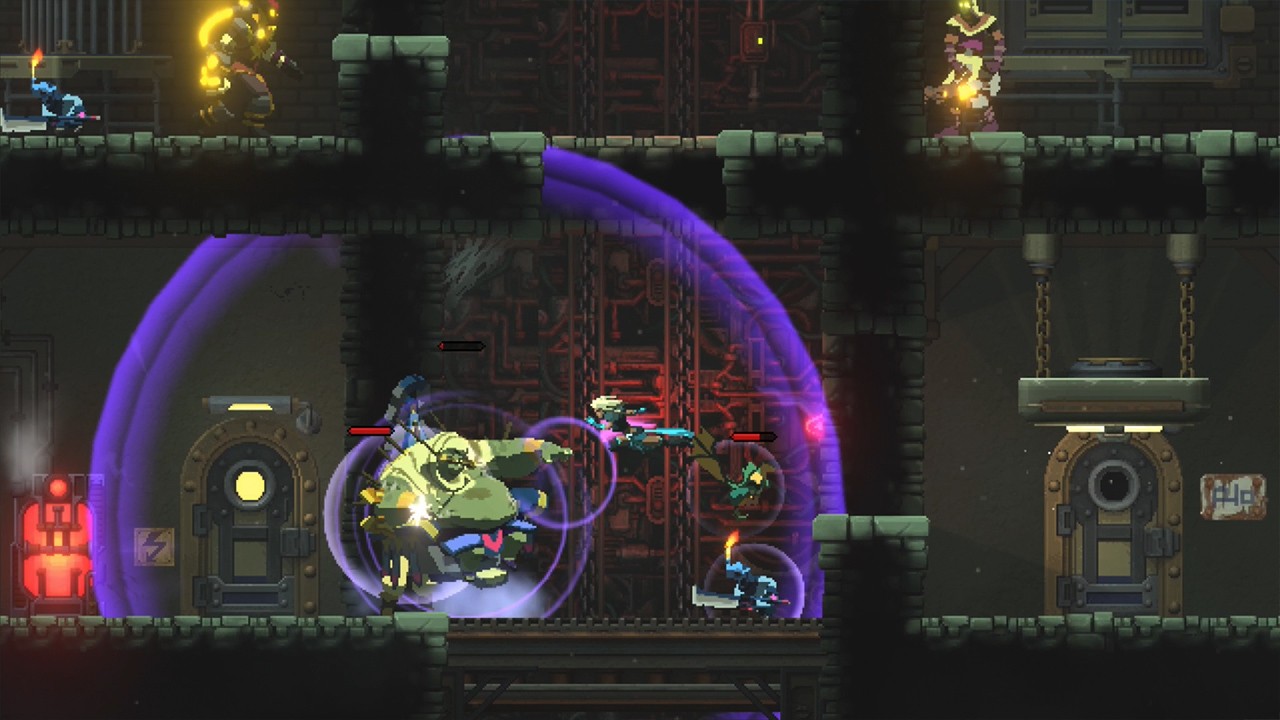 From the standpoint of someone who is neck deep in a run of Dead Cells on any given day, I will say that Foregone has some similarities. People who are screaming that it’s a Dead Cells clone are deeply mistaken for a number of reasons, which I’ll dismantle right now. There’s no procedural generation: every level and enemy spawn is deliberate and specific. The character’s goals and aims are very clear and there isn’t really a progressing chart in terms of your deaths and how they affect your future. In fact, far from losing everything upon death, the Arbiter has two choices: either sacrifice half their lost upgrade skills and cash to regain half instantly, or go back into the danger zone and try to reclaim it without getting killed again. It’s the massive difference between Jydge and Neon Chrome: while there are a couple overlapping elements, they’re fundamentally different games, and people shouldn’t throw too much shade on Foregone simply because it’s using a formula that shares elements with another game.

Having said that, the combat aspect of Foregone, which is the bread and butter of it all, is both a positive and a negative for players looking for breakneck speed. On the one hand, when things go well, the Arbiter is a sly and smooth weapon to handle, able to dodge in and out of the striking zone with the greatest of ease, delivering a well placed arrow to the face before sliding behind the enemy and whacking them multiple times with either a falchion or a double set of daggers. The ranged weapon auto aims, which can be a massive pain in the ass when dealing with multiple enemies, but it wasn’t annoying enough to make me hate the game. The weapon choices are dynamic and varied, and I positively fell in love with gunchucks (two guns as nunchucks) and refused to use another melee weapon. Also, the upgrade system for the weapons was fair and awesome: better loot has more upgrade slots, useless loot can be salvaged for cash, and there’re plentiful drops from everyone and everything.

The world of Foregone is a gorgeous one to explore, utilizing a dense pixel style to give it that cyberpunk, neo-noir feeling that captivates and pulls you deeper into the storyline. There’s plenty of differentiation between enemy types, and the variety of actual enemies is also pretty impressive. The first time that I ran into teleporting grunts that could Nightcrawler-bamf into the air and slam down on me, I was caught off guard, and it was effective in making me change up my play style. The bosses all have unique designs and attack patterns, often asking you to revisit the different ways you might approach them in order to win. They’re gargantuan, but not totally screen filling, which is good because Foregone chugs as it is. 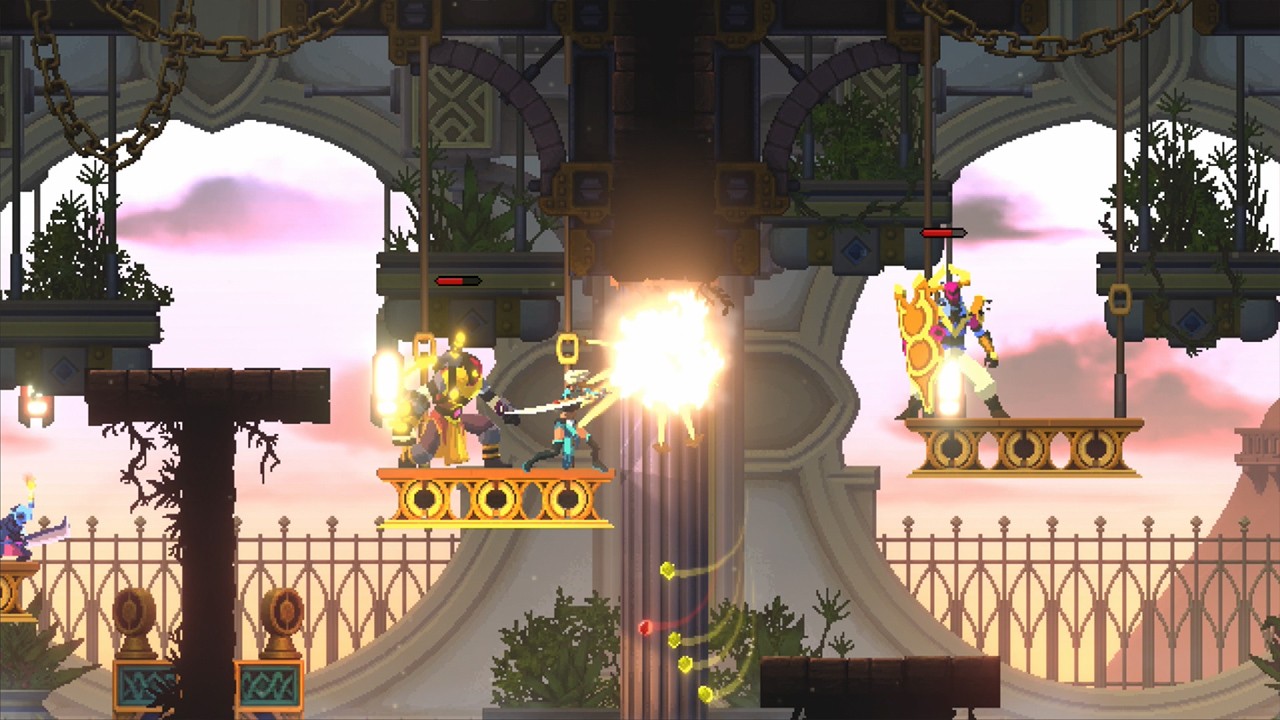 That is certainly a negative point for Foregone, and I hope that Big Blue Bubble can patch it out in the future. When you invoke the attention of other games, you get parallels drawn, and it’s unfortunate that we have a parallel with Dead Cells. While that game has been polished and buffed to be a smooth, incredible 60fps play, Foregone has a bit of stuttering and staggering, particularly when entering and exiting certain areas. It didn’t interrupt game play (thank God), but it was noticeable and it took me out of the moment. I was all set and enjoying myself in terms of frenzied whacking with my gunchucks and shotgun, and then I go to jump to a new ledge and I see the Arbiter sort of doing a shuffle pop, like there were a couple of panels dropped from the animation rig. The bar is high with these sorts of games and having any fallacy can be rough.

Having said that, I think that Foregone will appeal to people who like the concept of Dead Cells but not the execution. I liked having the waypoints that allowed you to go back to your home base and upgrade, particularly since you can backtrack to a Waypoint at any point if you just need a heal and to invest some skill points. I liked finding new skill inserts to make my character even more of a badass, adding explosive damage and the ability to leech life, and choosing those closed off other branches so I can do another playthrough in the future and see what the game is like with those activated. I like that there’s a skill you have that can always heal you, or you can swap it out for skills that turn you into a Berserker if you’re more confident in your playstyle and don’t need to go safe. The game added up, and it didn’t feel like luck was driving me to the finale: it was my own crafted character, a skilful choice in upgrades and gear, and that was rewarding. Plus, you know, I could always jump back and do a bit of grinding against weaker enemies if I wanted some extra cash to add one more buff slot to my pendant to go all the way up to an insane +16% health. Oh, and backtracking to find hidden areas where the best loot was. Seriously, insane armour hiding just inside the Armory, don’t miss it.

With three save slots, it’s easy to have multiple games of Foregone going at once, but I think players will want to invest all their time in just one game’s worth. Through and through, this is a dynamite game, exploding outward with promise, story, combat and a frenzied risk/reward system that pays out in spades. Players might take weeks to find the right build they want to reach all the way to the Harrow, but you have time, the game is fun and you really can approach it however you’d like. I’m certain that we’ll see Foregone get even more polished as time goes on (it’s still technically early access on the PC), so don’t worry about the minor janky moments between fights: when it matters, the Arbiter is there, and she is a goddamn warrior.