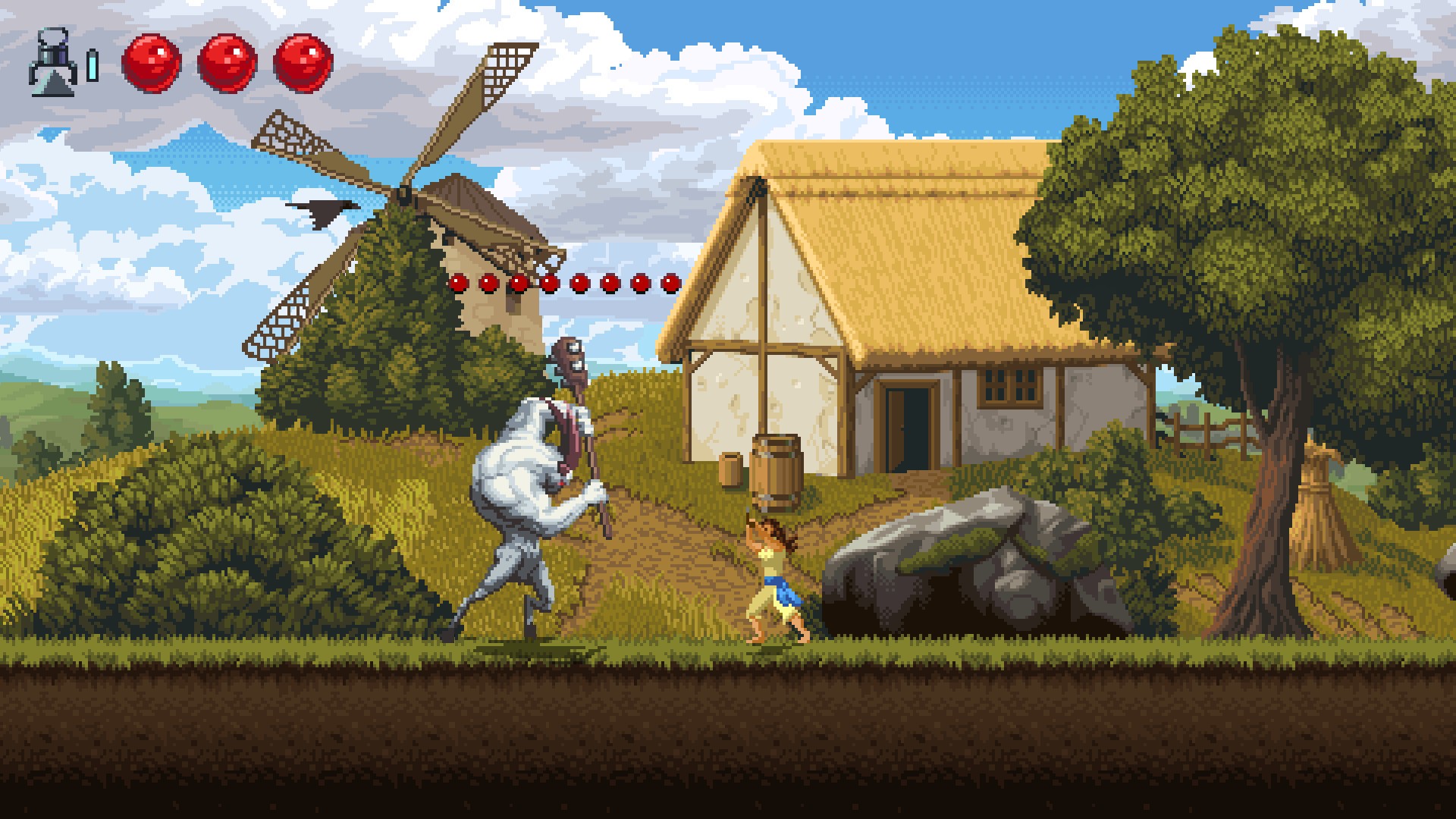 The first thing that hits me when Driven Out begins is the stunning graphics. Not in the Red Dead Redemption 2 style that makes you marvel at footprints in the snow, but hand-drawn pixel art that would have been the cream of the crop back in the 16-bit era. Background sceneries are vibrant and feel alive as much as they could be, and it has a certain Shadow of the Beast feel to it, only with a much brighter spectrum of colours.

Then we get to the animation, and it’s a combination of Flashback and Moonstone, only in this day and age, that translates as a little… choppy. Not one for paying attention to the tutorials or reading menu controls, I got stuck in straight away as a knight in full armour attacked my farmer character who has zero combat skills. Picking up the slightly oversized sword that they drop at your feet, you head off to fight enemy after enemy with no real indication of what’s going on.

One highlight of the game is a device that your character starts with that allows her to be cloned and create a checkpoint at practically any spot, pending you have the energy. Press down on the d-pad, and she will place the device on the ground, a hologram will appear, then once you die (you most definitely will), you’ll return to that point. So you don’t abuse this, you can’t drop the device after every encounter and have to wait for it to charge again, therefore use it sparingly. Each time you die, you will return to the device unless an enemy destroys it. That’s right, this game is tough. 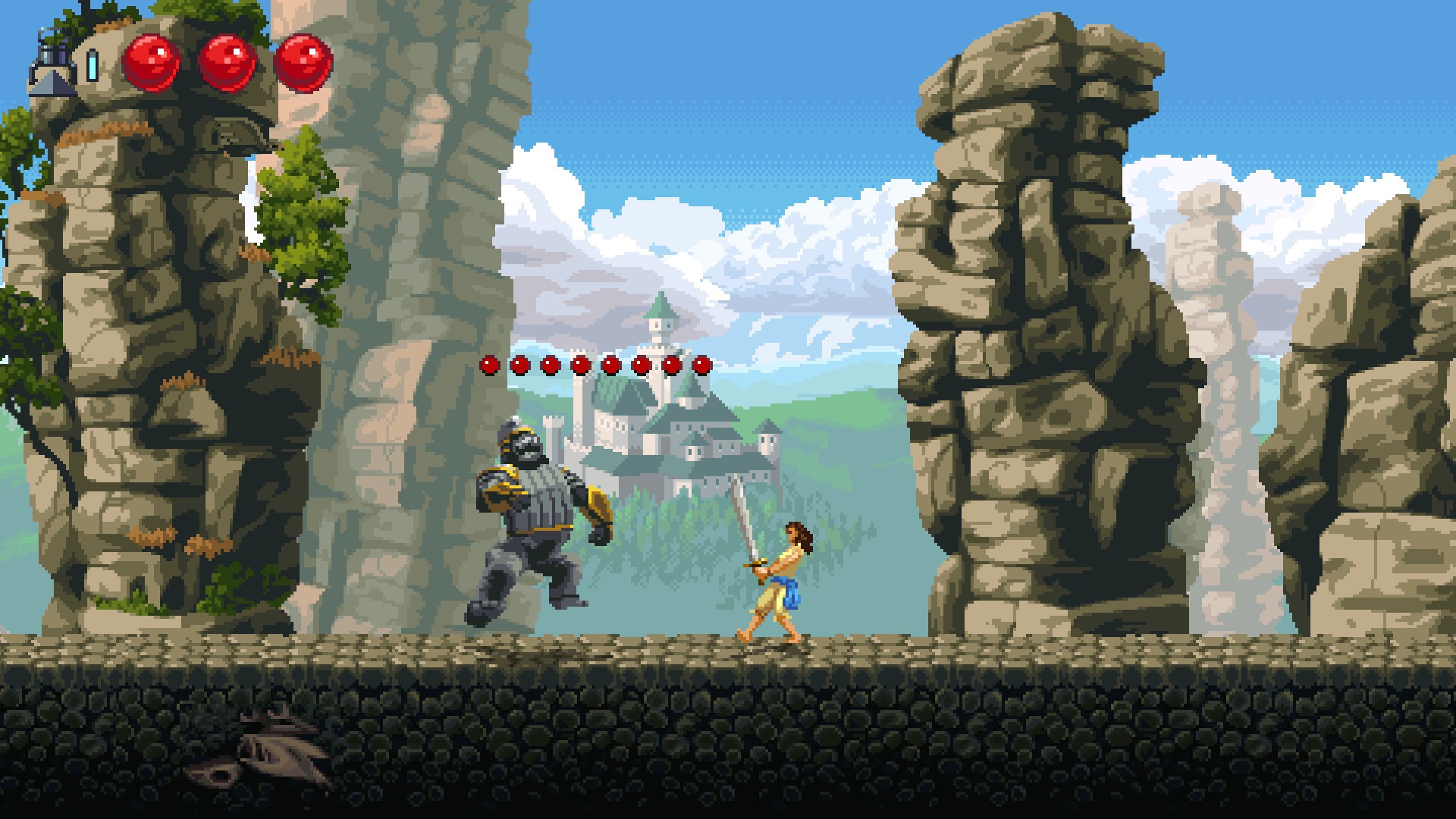 Usually, 1 in 10 reviews I write that are action-orientated will refer to Dark Souls. I’m no die hard, but I do love the series and never found it to be as challenging as some say it is. Yes, it’s very trying, but through repetition and levelling up, you can eventually beat anything in your way. Unlike Dark Souls, in Driven Out, there’s no loot, no power-ups or skill increments. You’re on your own, and that will eliminate most people of a limited skill set and patience. In other words, this is a very challenging game where it is essential to learn the timing and patterns of enemies as that is the only way you can beat them.

Noting that I dove straight in without paying attention to controls, I died a ridiculous amount of times. Practically every enemy has a greater reach than you. If you can get in close, you might be able to get a few button mashing hits in (there’s no stamina, but the movement is slightly sluggish), you can then spam some overhead hits in. Most of the time, if you can get a strike in, the enemy will bounce back. By the time you can get in close, they’re up again and attacking.

My method was simple: move in for the attack, as they attack move back and so on. It’s a dull approach. But this false strategy didn’t work. Before long I was fighting knights and werewolves, and no matter what I did, I’d be killed. It’s not one hit kills – you have a couple of replenishing vials of health, but they’re minimal. Getting frustrated, I went to the menu to look for a non-existing difficulty setting, then double-checked the controls. Sure enough, there was a modifying button of holding a shoulder button plus attack to block/counter. Boom: resolution. 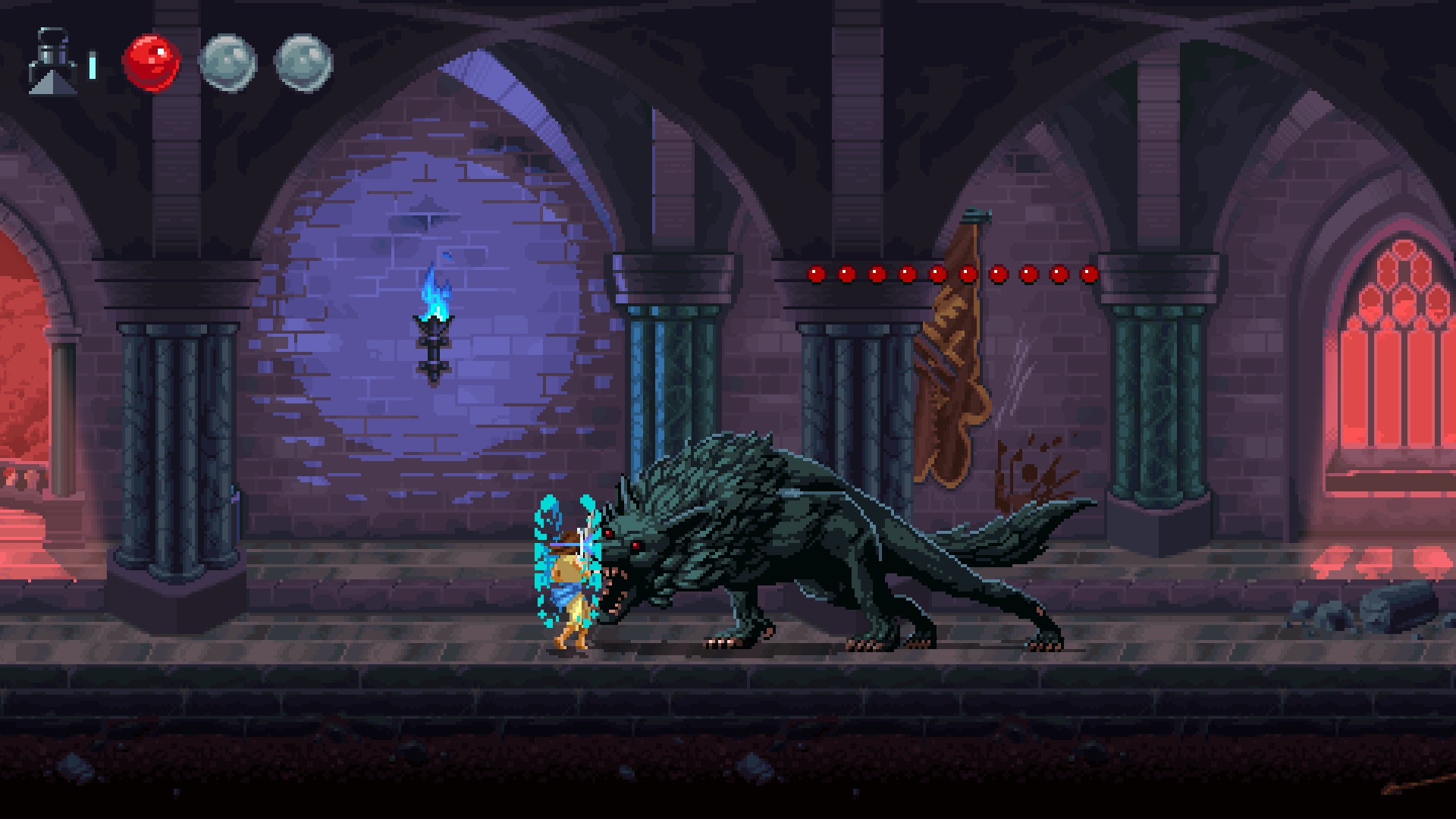 There are three attack directions, and modified with the block, the same amount of blocking points: high, medium and low. You can hold the block at the right time, and it will counter, forcing the enemy back and allowing you to get more hits in. By far, this is the way forward, but it’s very much a strategic game of timing rather than hit and run as I had started. Unfortunately, there’s no let-up, and this process continues throughout the game, which throws in a mixture of opponents that include some hard-as-nails bosses. It’s all very well having a bit of mystery with the story, but it’s not enough of a…driving force to motivate you to play this. Instead, it’s a sheer relief of getting through a section one at a time, hoping that the enemy doesn’t destroy your respawning contraption. It’s mostly a portable 3D printer.

Without a doubt, the presentation is the aspect that lures you in. It reminds me of yesteryear gaming, where we would marvel at how realistic everything was. While technology has come a long way, Driven Out doesn’t fail to appeal with its art style. Sure, the animation seems a little slow, as if it is a rotoscoped aesthetic – aiming for realism rather than gameplay, but if you break down the simple game mechanics, they’re pretty good and require a great deal of skill.

From my perspective, I found it just a little too brutal. The checkpoint system can be excellent, as you can define your own based on your playing style. Your approach to an enemy may be different to someone else’s, so perhaps you can go a little further with where you place your device. But the fact that the enemy can destroy it and send you back to the beginning is borderline cruel. While this doesn’t mean the very start of the game – beat the bosses and you progress that bit further, it’s still tough and with no adjustments available, the only way to muster through his learning those attack patterns.

Fans of the retro scene or us veterans who played them the first time around may be wiping the drool away in terms of the gorgeous visuals. Still, Driven Out is a test of character and whether you have the patience and skill to stick it out, with little reward other than the satisfaction of progress.