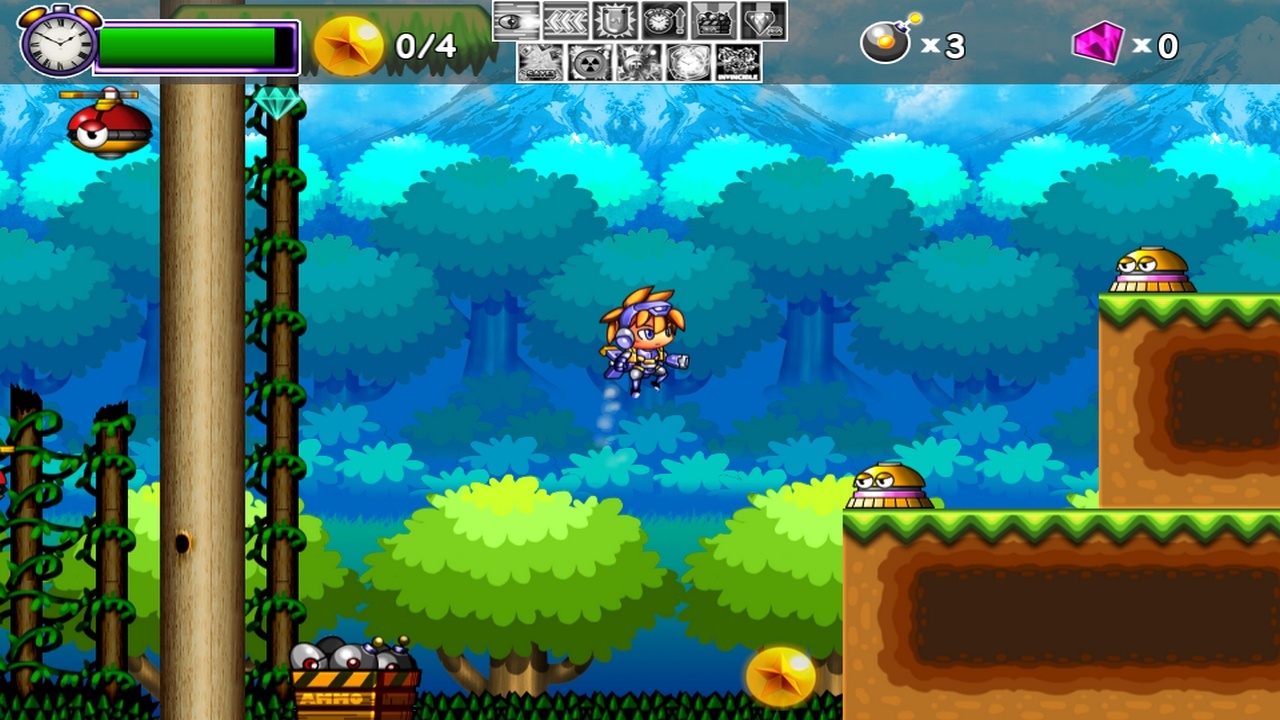 I gotta admit, there’s something almost impressively brazen about porting a game over to a console that has no story, no real following and nothing that immediately makes me take focus. When a lot of these mobile titles come over from the smartphone valley, they tend to a.) be cult classics, b.) have enough ties to bigger companies to make the port an inconsequential matter, or c.) already have a console port existing somewhere else. 7 Raven Studio doesn’t seem to have a version of their arcade platformer, Dyna Bomb, on any other console, but I was able to find versions on the App Store, Steam and Android. And I’ve never heard of this game in any capacity, and, upon reading the Nintendo page, I learned NOTHING about the world, the characters, or the purpose of the game other than to do it. Well, 7 Raven Studios, that takes guts, and, for that, I can take a better look at the game.

There’s only two buttons to speak of for controls in Dyna Bomb, which is a jump/fly button and a “throw bomb” button. The jump/fly is a little wonky at first because it’s incredibly static in the execution: hold button to go up and stay up, release to go down. Most titles with jet packs often have a bit of a hop on the initial takeoff, but here it’s a smooth, slow ascent like a portable helicopter. Once you’re in the air, you have very little reason to come down, as you can get the most out of things by simply flying around. The bombs, on the other hand, are a different story, and quickly become the learning curve to which you must adjust. The bombs have a small arc to the throw, and then will either explode when they touch an enemy, or will roll for a bit and explode when an enemy is found or when the timer (an unknown amount) goes off. Additionally, the bombs, unlike your jet fuel, is limited, and will result in you being without weapons if your aim is particularly bad. The levels often are generous enough to give you plenty of explosive recharges to accomplish a full sweep with a bit of wiggle room for error, but you can’t just hurl things around maniacally and pray for the best, You gotta get things under control. 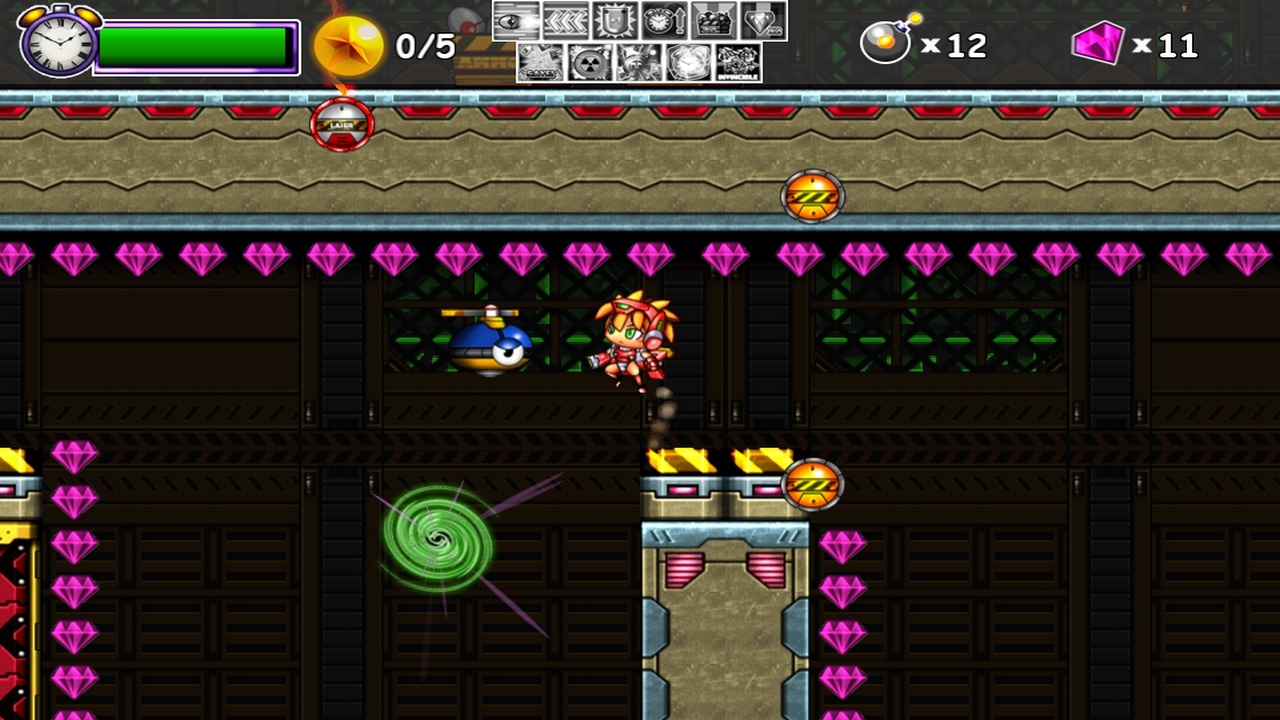 The purpose of each of the sixty four stages across the eight worlds of Dyna Bomb is simple: touch the ankh, which unlocks the door, and go through it. To the game’s credit, if you are looking to simply beat this game as fast as humanly possible, you can often accomplish this goal in every stage in well under two minutes, sometimes under a minute. But doing so undermines and ignores a lot of the level designs, which are meant to be equal parts puzzle and fetch quest across multiple iterations. There are switches that need to be hit to turn off lasers, gems of different value to collect, star orbs that signify a completionist attitude, and enemies to explode. The only way to say a level is “done” is to get all three orbs, every single gemstone that exists, and to blow up any and all enemies, regardless of how many times it takes. Getting all of these tasks done give you extra gemstones, which are the currency for the two pronged expenditure system of Dyna Bomb. You can buy temporary/permanent power ups at the shop between level, or there’s a Whammy-style roulette system that can net you far greater gifts than the normal level shop. It’s very clear that the mobile roots of Dyna Bomb are still exposed here, because, at 100 gems a spin, the roulette calls for players to make micro transactions and buy more gems, but, thankfully, that’s been totally removed in this Switch version.

The gameplay itself of Dyna Bomb is alright, and engaging at times. You get good at being able to move around the levels, but the timing for the traps and the movement patterns of enemies still needs to be kept into consideration. Without the speed power up from the shop, whichever protagonist you choose (girl or boy robot) tend to be a bit sluggish, and, with the stilted takeoff from the jet packs, you can get into trouble very quickly. This is a no-hit style game, so touching anything you shouldn’t is an instant loss of life (with unlimited lives) and, more importantly, loss of the power ups that you’ve collected between stages. The levels aren’t difficult to understand or follow, with a series of color coordinated portals that help the player leap from one area to the next, and very rarely getting dropped into locations where you might get instantly killed. The only thing I didn’t like about the portals was a cool down tendency, wherein if I teleported somewhere I didn’t mean to and wanted to go back, it would take a moment before my flashing avatar would calm down and let me jump back through. 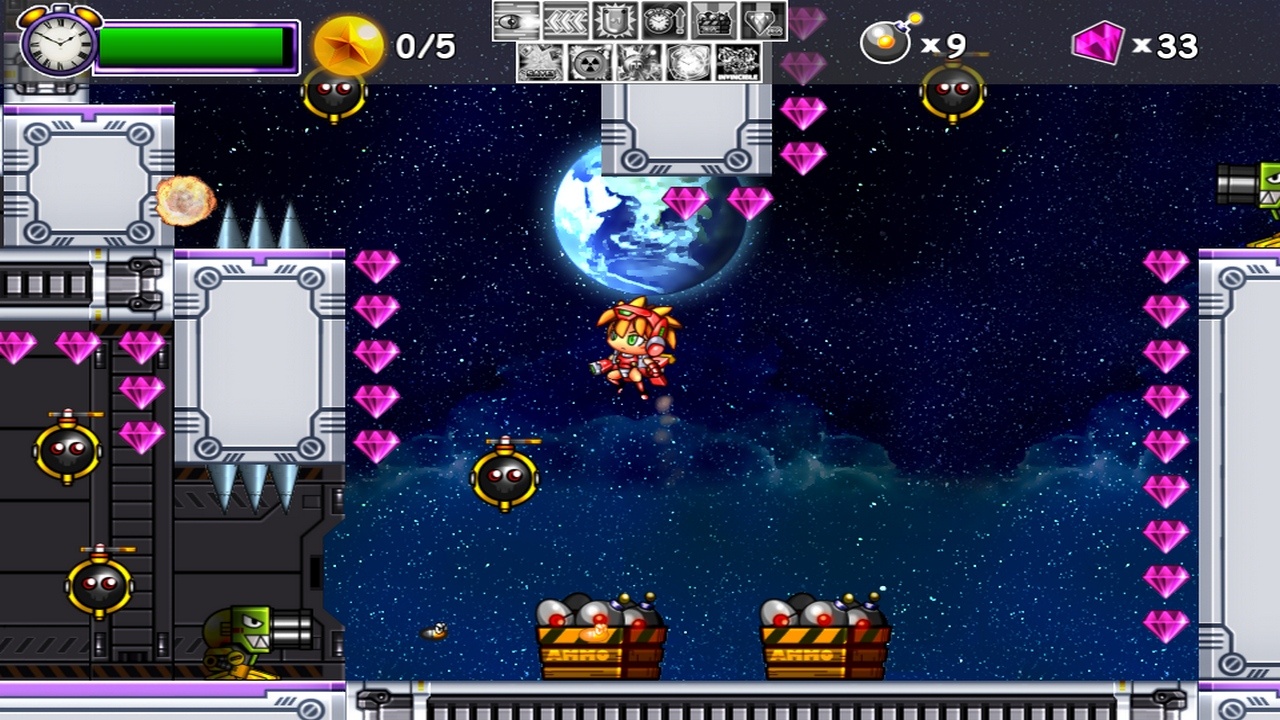 Additionally, not dying in Dyna Bomb is the key to keeping the game interesting. I realize that might sound obvious, but the power ups from the shop really do change the dynamic of things dramatically. Sure, you can drop 500 gems and get a single-use shield to prevent certain death, and the speed power up greatly increases my interest in the game (and prevents me being worried about the countdown clock), but the upgrade to change from bombs to missiles feels like a real game changer. Now your explosives travel in mostly straight lines, able to dispatch enemies from a much greater distance and giving you a better control of your destiny as long as you have any experience with leading a target. Dyna Bomb, ironically, felt so much better when I didn’t have to use bombs, but a proper flying weapon. Given that I wasn’t terribly impressed with the decent but forgettable soundtrack, and the art style felt like it was a very rough interpretation of a manga imitation, I was forced to really look at the gameplay, and the verdict is good, but not great. Those missiles, however, made things a lot better, and were very affordable. I just didn’t like needing to rebuy them when I mistimed laser traps or an enemy’s holding pattern.

Here’s the big takeaway, and try and understand it with a grain of salt. Right now, the Switch is buckling under the weight of indie titles flooding in, and it needs to take something special to stand out when you’re not being published by a larger team. Dyna Bomb is free, as in free, on Android and iOS, with IAP to remove ads and, you guessed it, buy a ton of gems. It’s on Steam without the micro caveats, but it’s also only four dollars compared to the six dollars that the Switch version requires. There’s nothing new or special about the Switch version, other than you can use the touch screen to choose things (like the mobile version) and can use buttons to control the game (like, well, everything else nowadays). The port runs well, there were no crashes, I played it without being angry, and that’s really about it. The artwork looks really stretched out and pixelated at times, I still have no idea why I’m doing anything in this game, and it just became a matter of lather, rinse and repeat. Hell, I even got confused because I thought I was repeating a level I had already done since it was so similar to a previous level, I actually had to check to make sure I didn’t choose “try again” in the menu. I’m hard pressed to recommend the game, but there’s nothing inherently that tells me to stay away. Just…maybe look a bit at gameplay yourself before diving in, but don’t expect too much.

I’m hard pressed to recommend the game, but there’s nothing inherently that tells me to stay away. Just…maybe look a bit at gameplay yourself before diving in, but don’t expect too much.