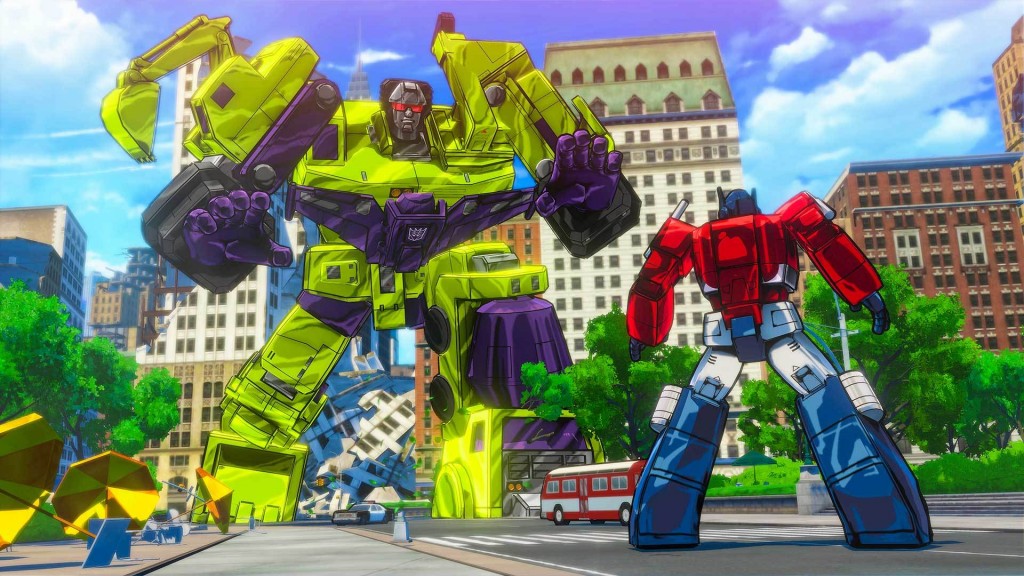 Platinum Games are probably my favourite developer and I love the Transformers (the G1 lot, not that horrible Michael Bay guff), so, as one might imagine, I was rather looking forward to, Transformers Devastation. With its gorgeous cel-shaded true to the TV show art design, the return of the original voice cast and the potential for Bayonetta quality gameplay, it appeared that Activision might well make up for their sub-par collection of Transformer movie tie-ins.

The developer, the early screenshots, the great 80s tone, everything looked perfect…….it looked, well, it looked too good to be true. Sure, Platinum Games have made some of my favourite video games of all time, but last time they worked with Activision, they delivered the decidedly average, The Legend of Korra, and as for Activision, the last Transformers game they released was the truly terrible, Rise of the Dark Spark (man, that game sucked balls). Despite my heart telling me that Transformers: Devastation was going to be the Transformers game I had always dreamed of, my head was telling me that bitter disappointment ultimately awaited.

Luckily, it appears that my heart was, rather unbelievable, actually right for a change. It’s not a perfect game by any stretch of the imagination (some rather obvious budget constraints ultimately hold it back from achieving its full potential), but despite a slightly empty looking open world and a hint of repetition in its gameplay, Transformers: Devastation nonetheless represents and fine return to form for Platinum and arguably the finest Transformers video game to ever grace a home console.

While it might not hold as much sway for younger gamers brought up on those charmless live-action Transformer movies, those with fonder memories of 1986’s cheesy but incredibly entertaining G1-inspired, The Transformers: The Movie, Platinum’s exemplary art design is likely to have you grinning from ear to ear from the moment you boot the game up. As mentioned previously, the partly open world can look a tad deserted and even a little lifeless at times, but the Autobots and Decepticons, they have never looked better and the animations throughout are exemplary. This really does look like a playable version of the animated show, and with the full voice cast all on board too, Devastation is nothing if not authentic.

As great as it looks though, all that visual fan service would count for little if the gameplay wasn’t up to scratch, but as any fan of Platinum will probably tell you, gameplay is where Platinum usually shine brightest. Yes, their games are almost universally gorgeous to look at, but be it Metal Gear: Rising, Vanquish or Bayonetta, it’s invariably the gameplay that sticks with you, and it’s the latter from which Transformes: Devastation wisely takes its greatest inspiration. 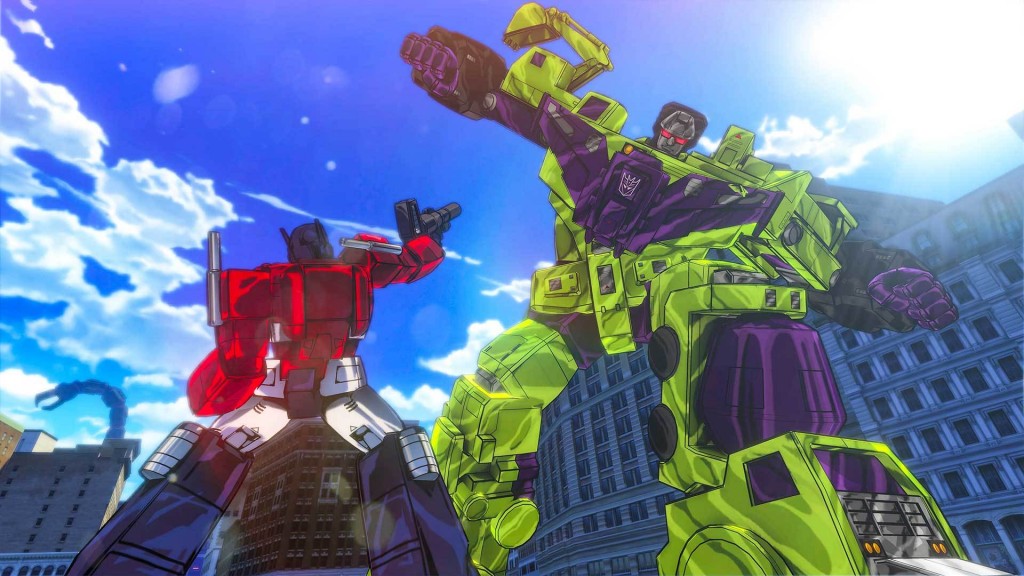 It might not be as deep or quite as polished as Platinum’s genre defining third-person action game, but Transformes: Devastation is a fantastic action game in its own right with core combat and mechanics good enough to warrant a look even for those uninterested in the world of Hasbro’s finest. It takes the core combo-driven combat of Bayonetta and essentially makes it accessible to a wider audience. It won’t satiate the hardcore Bayonetta / Devil May Cry You Tubers of this world, but Devastation strikes a fine balance in which more casual players should be able to make it through the game on the standard difficulty setting via the use of a handful of combos while the higher difficulty settings offer more than enough challenge for those looking to dig a little deeper into its relatively substantial move-set.

With five playable Autobots to choose from (Optimus Prime, Bumblebee, Sideswipe, Grimlock and Wheeljack), Devastation does deliver its fair share of variety even if none of the playable characters are all that different to one another. The base moves for each are all relatively similar, but each character does at least come with his own set of special abilities and attacks that make them more than just a simple re-skin of the Autobot that came before.

The good news is, whether it be the heavyweight attacks of Optimus, the faster-paced but weaker Bumblebee strikes or the more grapple-heavy exchanges of Grimlock, Trasformers: Devastation’s combat is rarely anything less than an absolute joy. The combos themselves are slick and effective, the implementation of what appears to be a rather direct rip of ‘Witch Time’ adds additional depth, the camera is one of the best found in a third person action game and the use of vehicle form is easily the best of any Transformer video game out there.

Rather than treating them as separate styles of gameplay, vehicle mode is incorporated into attacks and combos while the ability to change into full vehicle mode is something that adds another dimension to both combat and traversal. While the vehicles themselves actually handle very well, it’s the enemies subsequent use of the same ability that makes all the difference. Rather than sticking to standard combat, just like you, enemies will switch to vehicle mode at any moment and subsequently engage you with long range attacks. It fundamentally changes the way that you approach battle and makes the whole game feel much more dynamic as a result. 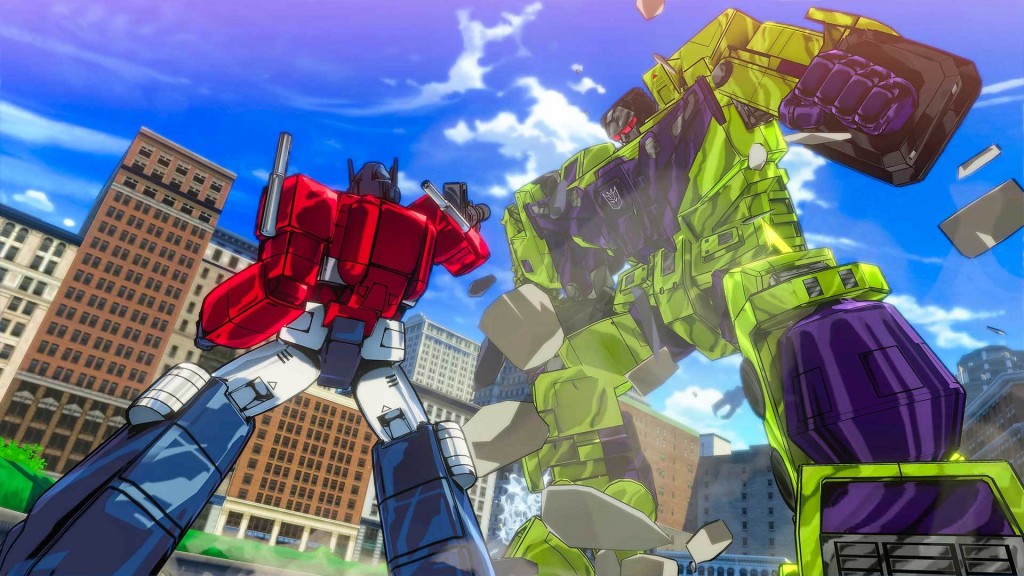 Not only that, but the games’ selection of fantastic chases also incorporate the same ethos. Rather than simply chasing down and ramming an enemy, you’ll instead find yourself chasing them down in vehicle mode before transforming on the fly and attacking in robot mode. It sounds simple, but its implementation is universally brilliant and, along with the pitch perfect audio-visual design, combines to create a game that often looks like the animated show in motion.

This kind of gameplay is used to great effect during many of the games’ excellent boss battles; whether it be a chase or a large-scale melee showdown, Transformers: Devastation delivers some of the best boss battles I have come across this year. Both mechanically and visually, many of the boss battles (of which there are plenty), show off Platinum at their best and often represent the most memorable aspects of the whole experience.

Some will inevitably be disappointed by the lack of any discernable multiplayer options, the (relatively) open world isn’t the most visually impressive you’ll ever come across, and despite its quality, the combat can become a tad repetitive during extended play, but despite these issues, Transformers: Devastation is by far and away the best video game interpretation of this most beloved of franchises and a timely reminder (if one was needed), of just how good Platinum Games are when it comes to fast-paced action games.