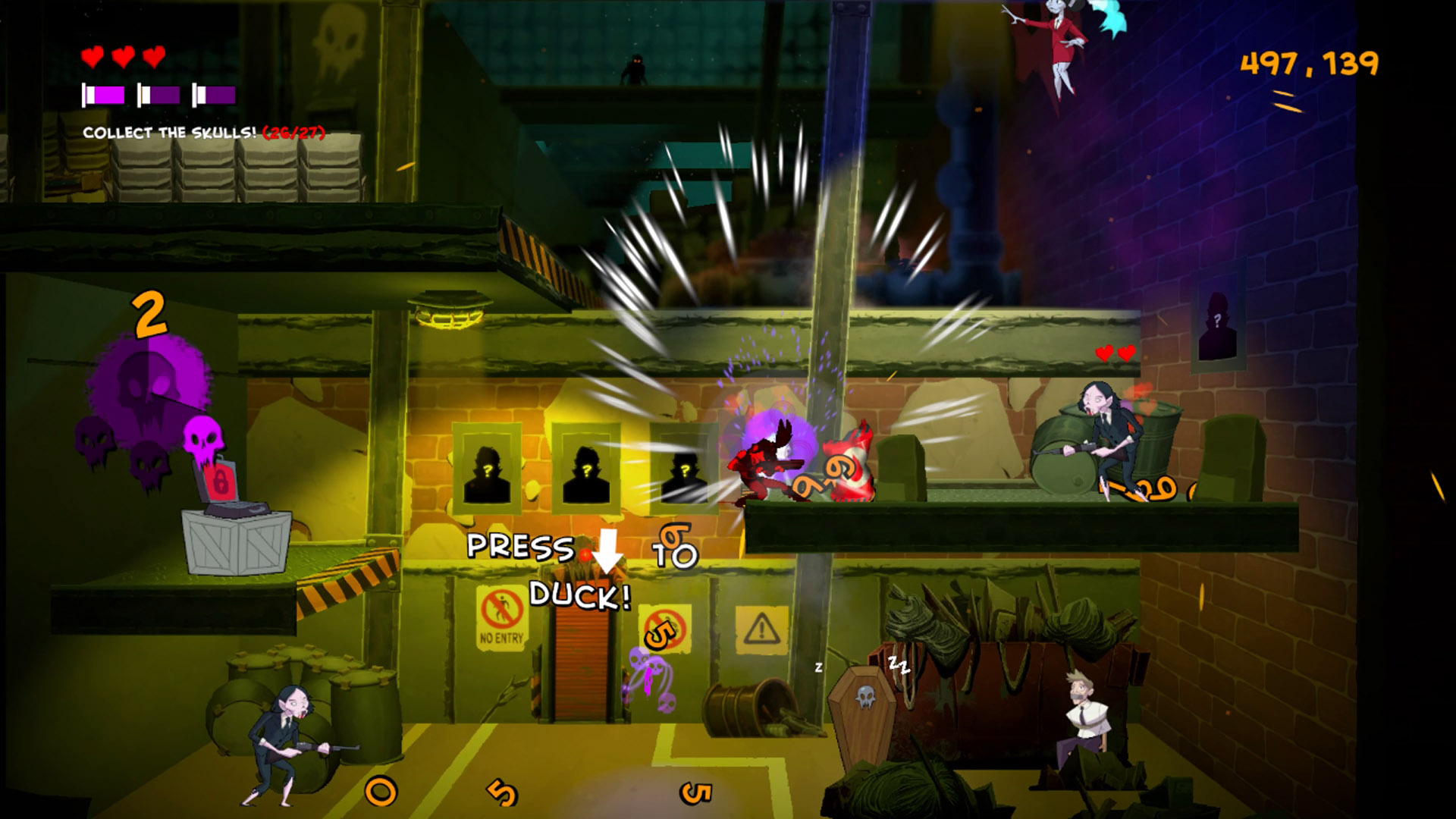 If you never got over your eyeliner and sparkly vampire phase, and want a refreshing, simple game with vampiric themes and action, Screwtape Studios has the game for you. Damsel is a platform-style arcade title with some serious bite. Offering a compelling, easy to follow story, and some serious supernatural encounters – anyone with a taste for blood and empowered female protagonists should definitely sink their teeth into this game on Switch.

Playing as the eponymous ‘Damsel’, you’re tasked with discovering what the vampires are conspiring and freeing their hostages. With a focus on the dark, grunge and emo aesthetic directions, this title really plays with its settings. You are a powerful young woman, diving through the hiding places of these vampires and dismantling their plans from the inside. With levels, which increase in difficulty, additional threats such as; being poisoned or stronger enemies and the consistent themes – Damsel is strong conceptually. The gameplay is rather basic and geared towards those with a completionist playstyle; at the beginning of each level you are treated to some story in the form of alternating comic panels and then told what your mission is in each arcade style level. The levels had little to offer after the first few stages and while there were a few new additions to increase the difficulty as you progressed, there is limited gameplay besides beating your time again or beating the times of others – this game doesn’t offer as much of the challenge it advertised. 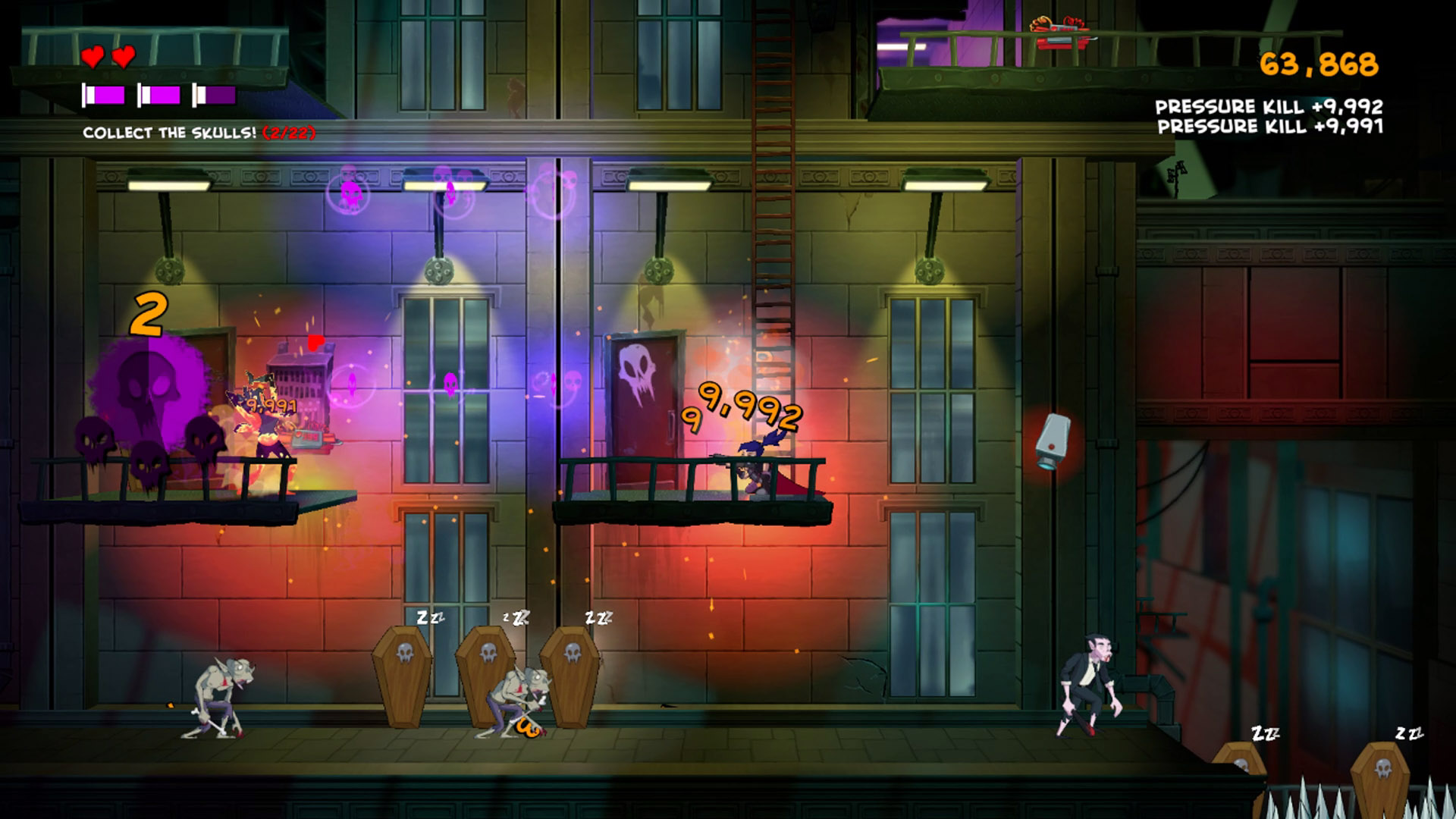 The art-style has 2D graphics and a dark colour palette, definitely complimenting the edgy and almost cartoonish plot at times. I really enjoyed how the levels looked, appreciating the burned out and abandoned settings that believably portrayed as a place overrun by a vampiric enemy. Damsel herself is also well-designed. It’s refreshing to see a lead female character who is actually dressed for her job and not for the male gaze. Her characterisation was built upon further in the comic-strip expositional scenes between levels. Whilst these excerpts were short and rather limited in their development of the plot, they featured some inspired artwork and really brought Damsel to life as a character. Despite this, many of the levels were too much of the same and while the art saw some variation between stages and larger levels – I wasn’t too thrilled at the lack of a world being built with the visual design.

Something that can be forgiven in Damsel is the music. The tracks sound a fair bit like one another, making it difficult at times to distinguish one song from another. Whilst the music set the tone and surely delivered that injection of mid-2000s melodrama, it began grating quickly. The indie title’s music did however help with motivating me to race through the levels, the beat and the melody of the songs goading me on to complete the level and move onto the next. While it was repetitive and a bit bland after a while, Damsel’s soundtrack was rather solid for setting a tone and enhancing the intended theme. 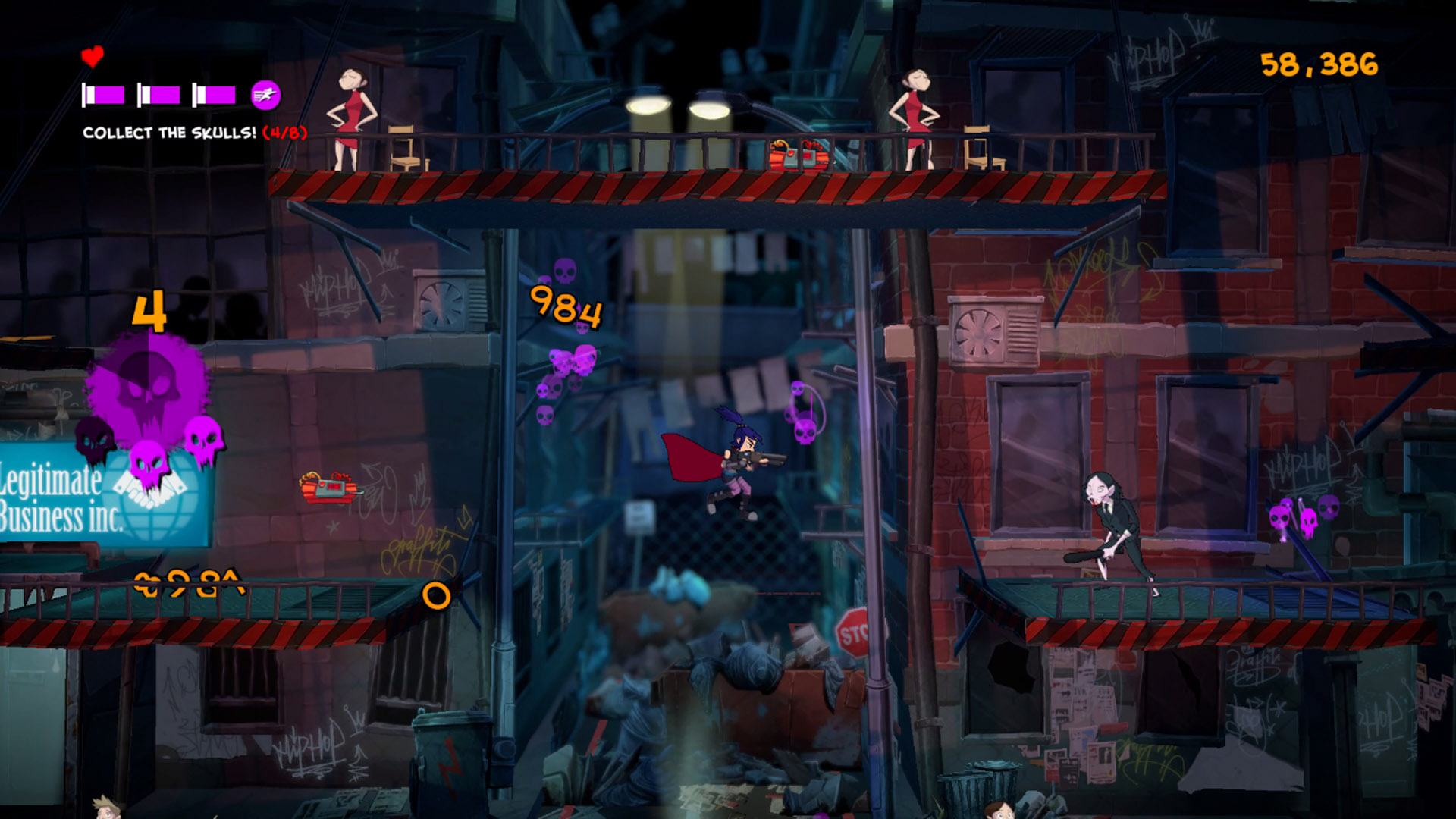 This game has some serious replay value; the arcade mode opens up a lot more playtime. Having a Leaderboard of times also means you can compete to beat the records of the best and also challenge your own timings. While I’m not one for speed-runs, this game could definitely scratch that itch for a lot of players.

Whilst playing Damsel, the art style reminded me a lot of Flipping Death – a title which is a firm favourite and this definitely helped my enjoyment. The clever and sometimes unconventional artwork really plays to Damsel’s advantage, giving the game a needed edge in the platform market. Whilst it did not deliver the experience of platform titles like; Celeste and Hollow Knight which are similar in play and basic gameplay composition, it provided a fun experience that could be enjoyed in an afternoon or two. This game makes use of an enigmatic and interesting female playable character, playing with the titular stereotype and providing some much-needed representation for a take-no-prisoners level heroine. It’s the sort of game I’d want my sister to play. Sorry Peach, this princess rescues herself. And she has guns. Super cool.

This is no Damsel-in-Distress. Damsel is a great, empowering game about kicking vampire-butt and saving the day.