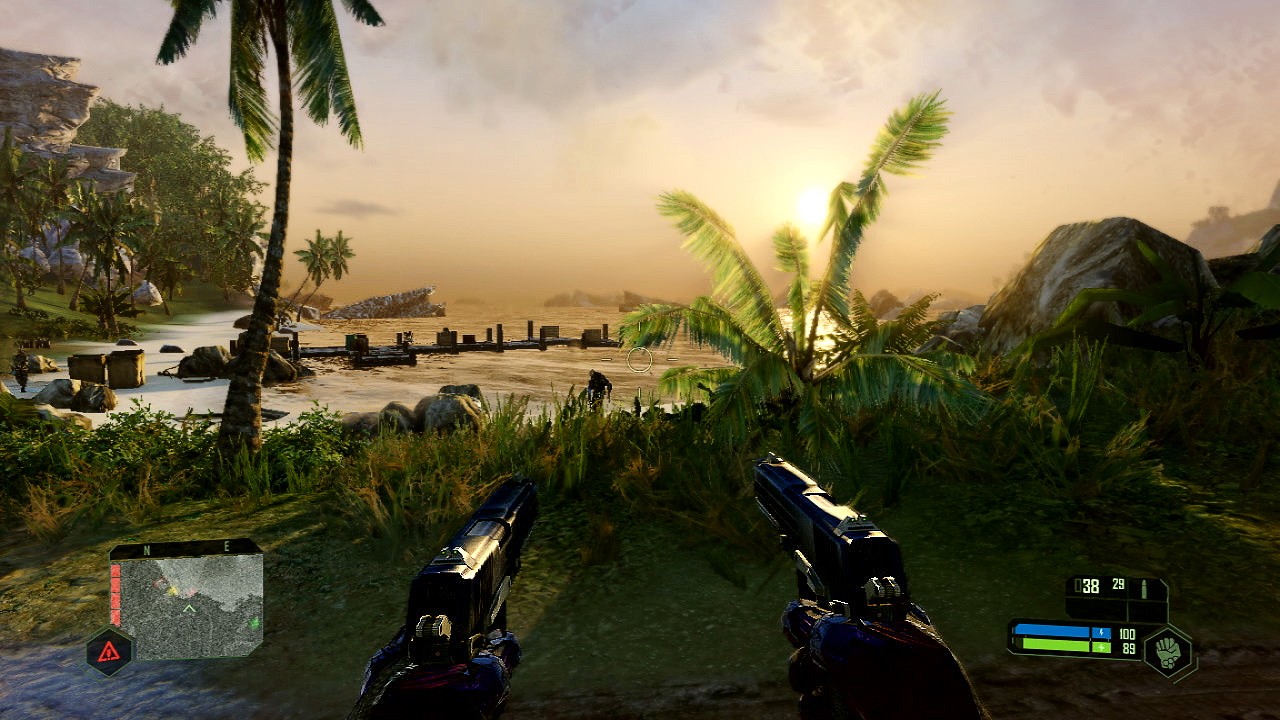 The birth of a new standard, the death of an old meme.

The name Crysis has been used in the video game world for years now as a point of contention and some variation of smug parody when it was referenced in any video, article or review. The first-person shooter, created by Crytek over a decade ago, was a doorbuster in terms of presentation and style. Because of the incredible graphics for the time, the game was also quite demanding on PC rigs, causing people to parrot around the same phrase over and over: “But can it run Crysis?” It’s funny: the way the meme continued to live and keep circulating, you’d think there was only one Crysis game, but Crytek made two sequels (and one standalone expansion) and they all ran perfectly well on consoles and PCs, so the whole thing was a lost joke. Thankfully, the Internet never fails to run something into the ground, through the ground, into the magma core, and back out the other side, so I’ve still been hearing this quipped even today. But today the joke is finally over. Here, in my hands, on my Nintendo Switch Lite, sits Crysis Remastered, and it’s a frigging sweet ride.

If you don’t know the plot of Crysis, it’s a fairly standard idea of counter terrorism with some sweet technological twists. The game takes place on August 2020, and it stars North Korea as the aggressors initially, so buckle up because there’s still a chance this could go from science fiction to prophetic fiction. North Korea invades a set of islands to the east of the Philippines. The U.S. Army sends over their Delta Force to deal with the issue, and you play the main character, who goes by the call sign Nomad. Which is great, because you’re promptly separated from your group the second the game starts up, so I’m sure the call sign wasn’t just a coincidence. Anyway, you’re here to kick some North Korean butt, but you pretty quickly find out that there’s a lot more going on that may or may not involve aliens (it totally involves aliens) and suddenly the fact that you’re in the most trumped up battlesuit of all time just to fight North Korean’s doesn’t seem like such a bad idea. It’s a great FPS concept with some really solid storytelling in the mix, but, don’t worry, most of the focus is on the shooting, not the learning.

With Crysis Remastered, you stay in control of Nomad for the duration of the game, occasionally meeting up with your other Delta Force members, though those members will be spirited away in one form or another. Nomad is equipped with a Nanosuit, a full body tactical gear that allows for superhuman strength and speed, absorbs some damage of bullets and explosions, and also allows you to occasionally travel in cloaked mode so that you’re not immediately spotted by conventional means. Now, the Nanosuit doesn’t make you Superman: it takes only the first encounter with enemies to realize that, much like water resistant versus waterproof, it takes only a short amount of gunfire to permanently put you down. Additionally, you’re not always just on your own two legs and thinking about keeping your meat bag unpunctured. Several times, you get to be behind the wheel of a vehicle, using a mounted weapon to take down other enemy vehicles and soldiers in a quest to try to get things neutralized and clear as quickly as possible. Nine times out of ten, the biggest thing you need to figure out is how fast and how well you can shoot the living crap out of something, but that doesn’t make it any less impressive to pull off. 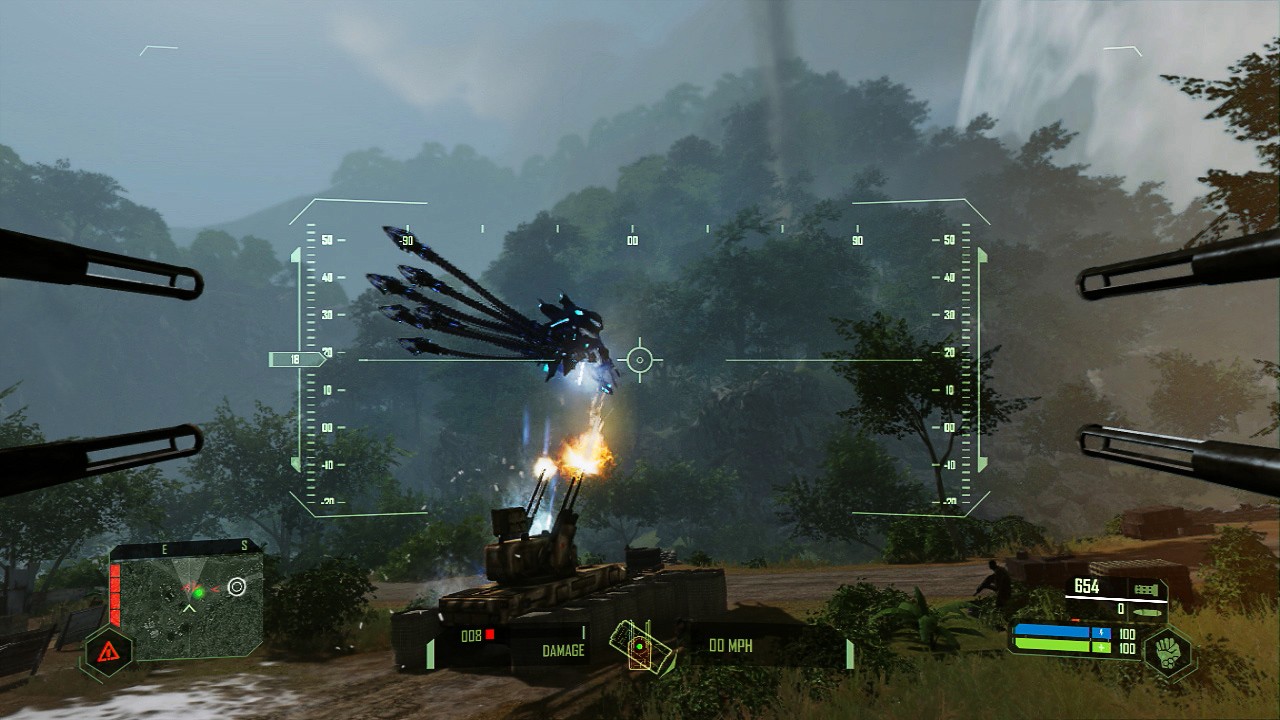 We’ll examine the smouldering question on everyone’s mind in a moment, but let’s take a look at Crysis Remastered as a game at first. Clocking in about eight hours of gameplay, front to back, Crysis runs you through a massive gamut of mobs and targets to deal with, including several boss-like structures that need a lot more strategy to overcome. The landscape of the Lingshan Islands is surprisingly large, and even more so when you move…off the islands. Mixing a variety of terrain from beaches and caverns to jungles, grasslands and mountains, you even get some interior shots of both terrestrial and extraterrestrial game maps. Crysis is from that grand era that focused an equal balance on both seeking cover and rushing forward in two heaping spoonfuls. There’s no simple way to approach any different part of the game: thanks to a quick saving system and some fast reload times, the best course of action is to learn through trial and error. Maybe the enemy needs you to be on top of them before they can get their bearings. Maybe waiting it out and trying to be stealthy will cause the least amount of bullets in your ass. Make no mistake, your own approach to the game will also shape the success or failure of these actions, so keep it all in mind as you try to extrapolate the next move you make.

Also, Nomad’s arsenal gets to be hilarious at some points in the game. You already have three weapons when you drop down: your fists, a smaller pistol, and a massive assault rifle. Nomad will have no shortage of ammunition or other weapons, especially once you need to take down flying vehicle enemies, and the concept of “leading”, or aiming where you think a target will be, becomes a skill to train. It’s been years since the first open world game allowed you to shoot a helicopter out of the sky with an RPG, and the formula has never stopped being fun or empowering. Just imagine how awesome it is to shoot down an alien spacecraft with one, like you’re doing a ground troops version of Independence Day. Spoiler: it’s awesome. The only thing I didn’t care for with the shooting was, sadly, the vehicle moments. I had a harder time keeping my eyes and my weapon trained while also trying to spin around in my jeep/truck/whatever, and my natural motion sickness to FPS games flared up horribly at this moment. Let’s be clear, it wasn’t the game, it was me, but I was still unhappy. 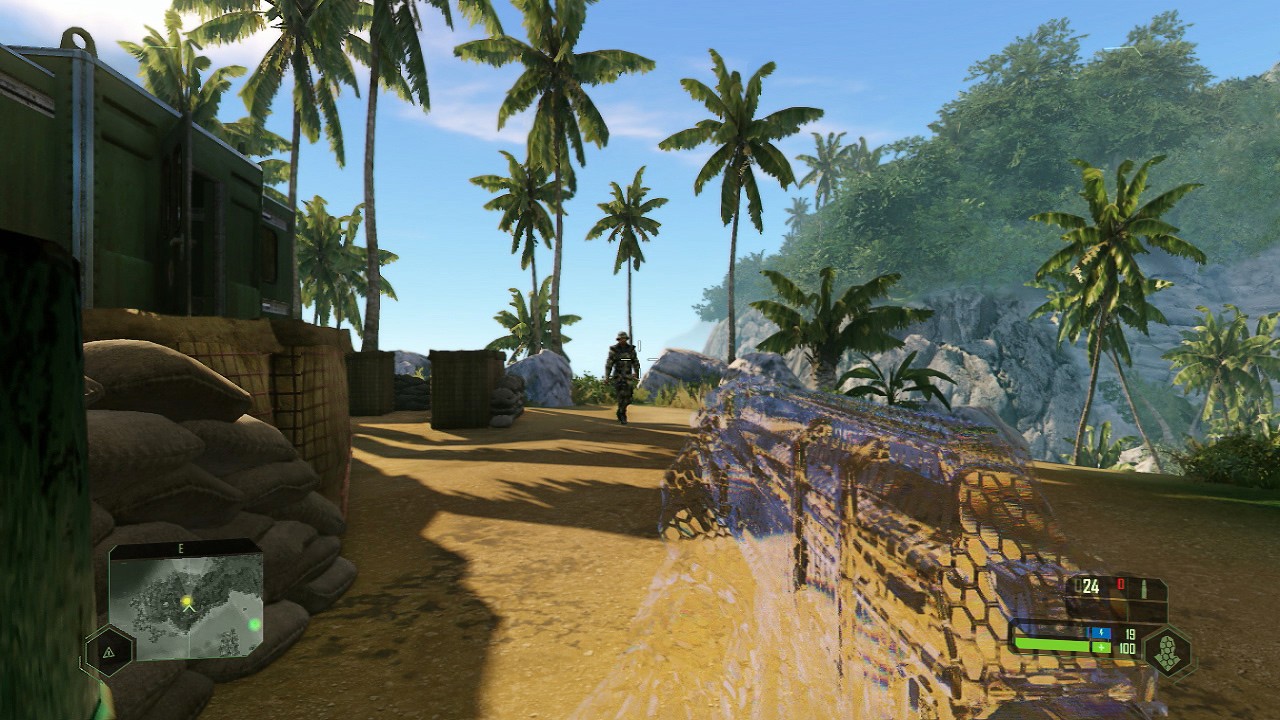 But the main thing everyone is wondering is “how does the game look?” Crysis Remastered is simply unbelievable on the Switch, even in handheld mode. I’ve played quite a few FPS titles on the Switch, but most of them are older titles: Doom ports, Duke 3D port, even an Immortal Redneck port. These older titles didn’t ask for much, and the Switch was happy to deliver. The other first person titles that I’ve tried more recently – Blair Witch, realMyst – felt taxed on the Switch, with Blair Witch being one of the harder hits I’ve seen. Crysis, by comparison…it’s unbelievable. I seriously am impressed, to an untold degree, how good this game looks, even in handheld mode, and it’s no small feat that it’s been packaged to be such a contender. The way the jungle, mountains and beachscapes are rendered is no small feat, and there’s no sluggishness or drops when you move in and out of cloaked mode, giving your avatar this ethereal, gaseous appearance that just blends right in like digital camouflage. The only time I can tell that there’s been some allocation made is with the motion blur effect when moving around. Honestly, it’s a smart choice, and it removes some weight of the game considerably without compromising the overall look. Hell, the fact that the install size is less than 7 GB is a feat unto itself, but then to make the game function, look and feel as great as it does? Its unparalleled, and I doubt I’m the only reviewer to say this.

Though the removal of the multiplayer mode is a bit of a letdown, Crysis Remastered is the frigging band to beat on the FPS front for the Switch. In just a couple short years, Nintendo has become the lightning rod for some classics to make their way into a brand new set of gaming hands, between Wolfenstein, Bioshock, Borderlands and now Crysis. Will we get a chance to see other fantastic titles in the future (fingers crossed for Shadow Warrior)? Perhaps, but the point for now is that this is THE shooter to get for the Switch. Decent story length, replayability with adjustable difficulty (and part of the difficulty is the language spoken by enemies, how awesome is that?), and just some fantastic shooting strategy from front to back. If you’ve got any room on your memory card, download the hell out of this game. You won’t be disappointed.

One of the most memorable shooters from the last decade arrives on the Switch, showing no signs of aging or wear, and ready to captivate a whole new generation.