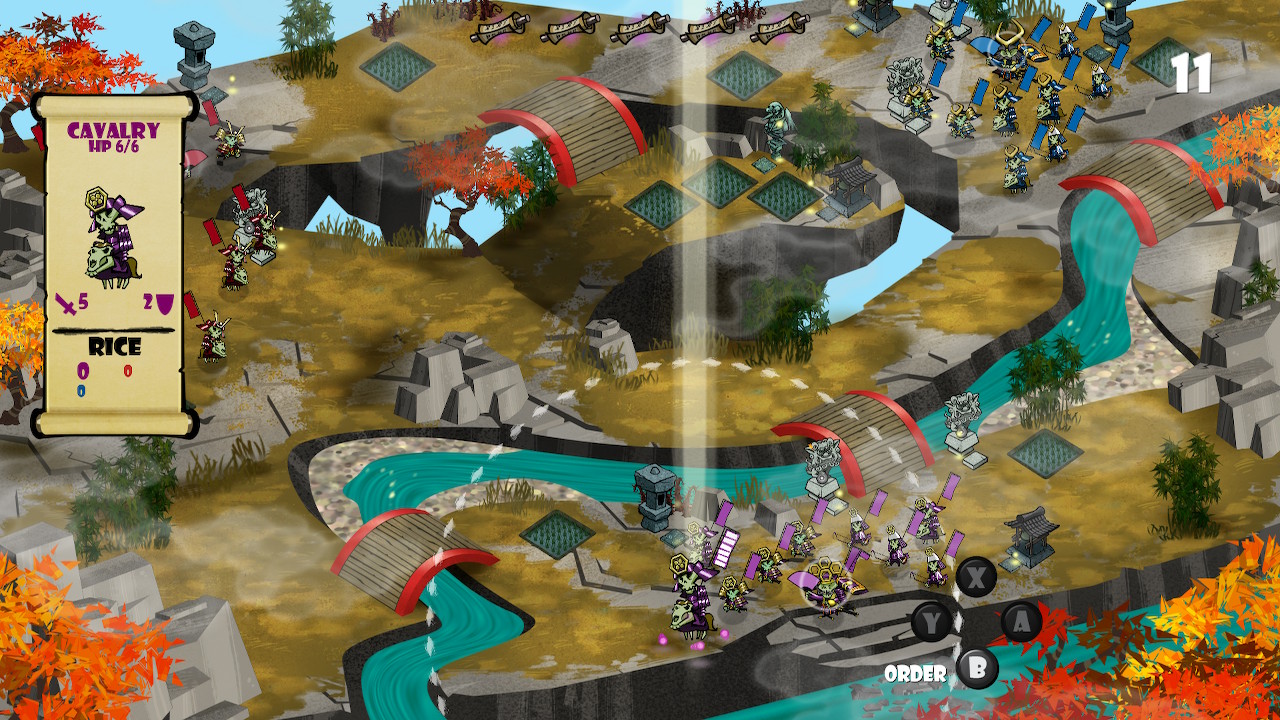 I’m quite partial to the odd turn-based strategy game. I enjoy their structures and ability to give the player time to think out strategies, as well as take advantage of unit strengths and weaknesses and terrain attributes. At the same time though, I can also understand why some gamers are put off by its mechanics, with a rigidity to its playstyle and movement and often, slow-pacing to its elements. However, 612 Games and Golem Entertainment, along with 17-BIT, have come up with refreshing take on its genre, with the fast-flowing and free-to-move Skulls of the Shogun: Bone-A-Fide Edition as it sheds its skin onto the Nintendo Switch.

Although primarily a turn-based strategy game, many of the mechanics often associated with its genre have been stripped back to the bare bones to produce a more arcade-style and humorous take to produce one of the most compelling games of its kind. The game follows the exploits of General Akamoto, a Samurai General who gains infamy through his victories on the battlefields of Feudal Japan. However, upon reaching his greatest victory, our hapless hero is stabbed in the back, where he duly dies and is transported the underworld.

Unable to accept his own demise and defeat, the General builds up an army of skeletal soldiers and embarks on a journey through a variety of locales, each one based around the seasons and nature with a distinctly Japanese feel, within the land of the dead in order to rule the afterlife for himself. However, a series of twists and turns soon reveal themselves, forcing you to fight your own personal battle against the very person that ensured your own demise within the real life. It’s an interesting story, but not one that takes the main stage in this game. In fact, this is never a game that ever takes itself seriously, with a legitimate level of humour and a host of characters that you can’t help but fall in love with; despite their skeletal appearances and fearsome personas. 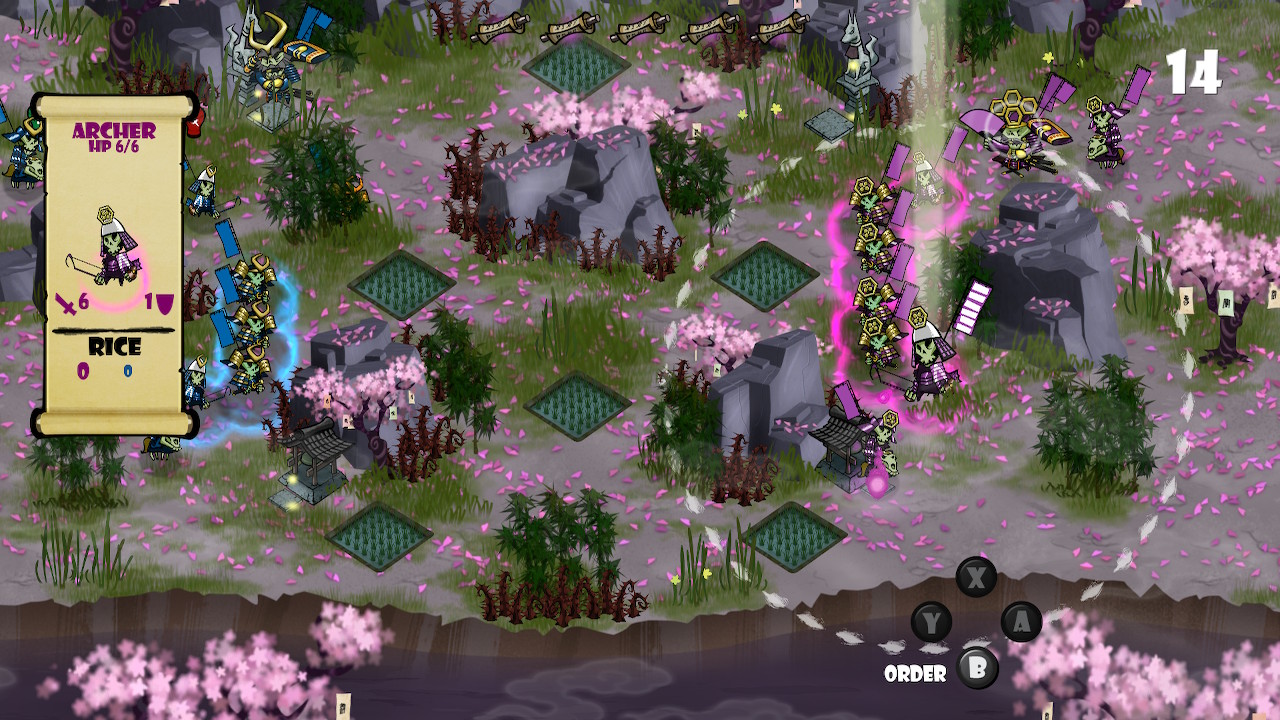 The level of humour here, perfectly matches the overall feel of the game, with a hand-drawn aesthetic that can evoke memories of Paper Mario and an interesting cast that brings a refreshing change of pace to the norm that is expected from such a game within its genre. Despite its charming themes being central to the game, the real stars of the show come in the mechanics of the gameplay, with a refreshing new style that adds a fluidity and freedom to the proceedings.

Rather than being restricted by the movement of grid-like pathways, each unit you select produces a radial border around them; the size of which varies from unit to unit. This in turn gives you the freedom to move your chosen unit anywhere within the radius of the circle; giving you a lot more freedom of scope in how you position your troops in a tactical way. Depending on the distance moved, you can also re-position your troops after their attack move; allowing you to retreat to protective cover or rejoin your allies in a defensive stance. It’s also within this mechanic that the game takes on a whole new level of depth within a variety of its elements.

There are a number of features within the game that add a whole new layer to the gameplay. The first of these involves eating the skulls of your slain enemies. Yes! Literally eating skulls. This offers a host of benefits from regaining and extending the maximum health of each unit, but by eating three of them, your unit transforms into a demon that boasts extra offensive stats and even the ability to execute an extra move in their arsenal. It soon becomes an important asset in gaining an advantage on the battlefield. However, there are also a series of other elements that also need to be considered.

Dotted around the majority of battlefields, a whole host of extra features lie dormant that can be activated by haunting them. Paddy fields awards you with rice per turn, which in turn can be used as currency with which to raise more undead units by haunting shrines. There are also a number of specific shrine types, such as the fox that can summon a Monk who has the ability to heal wounded units or the Salamander shrine who can produce a bit of an arsonist. There are so many elements that need to be taken into account, that the simple premise of turn-based strategy takes on a completely new level. 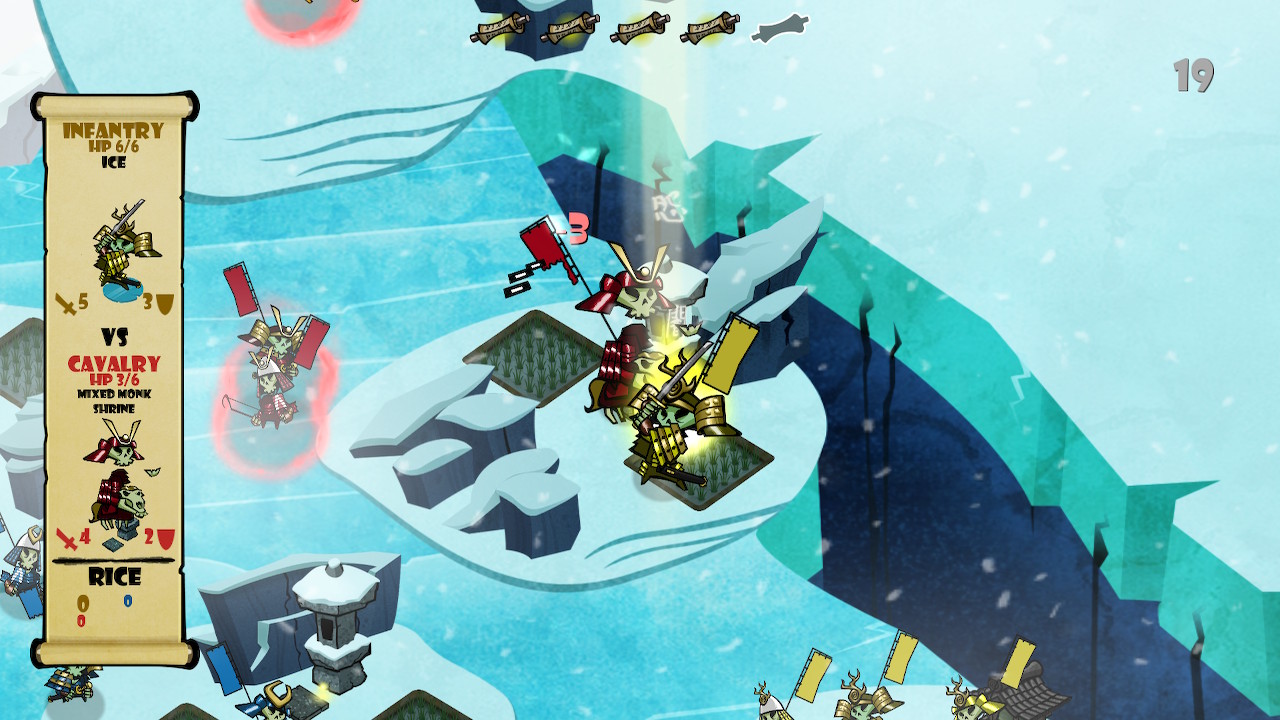 Each of the units possess different capabilities, from infantry warriors to cavalry types and archers for long-range attacks. Positioning of these units also plays a critical role and can have varying effects, such as preventing enemy types from pushing individual units back, or even over the edge of a cliff to an instant demise. They can also provide defensive walls that archers can hide behind and even grant your general the ability to meditate and increase his overall health. In fact, the overall level of depth within the game’s mechanics is simply staggering that I know there’s bound to be something that I’ve missed out within this review.

As well as its twenty-four levels of campaign madness, the game also caters for couch and online multiplayer for up to four players. Through a series of skirmishes you can play turn-based multiplayer matches that involves each player taking their turn whenever they can; essentially pausing the game until each player has submitted their moves. However, should a player drop out, then the AI takes over to ensure the game isn’t disrupted. It all adds to produce an immensely satisfying campaign and a long-term appeal with taking the fight online, or locally, after its story has long been finished. This Bone-A-Fide edition of the game also comes with six new multiplayer levels with maps based around a forgotten isle and a new, Tanuki Monk who has the ability the change the tide of the battlefield through some very mischievous ways.

Overall, Skulls of the Shogun: Bone-A-Fide Edition presents a refreshing take on the turn-based strategy genre. It’s engaging, hilarious, charming and provides a good challenge within its difficulty and various elements that need to be considered at all times. Even if you don’t care for the multiplayer side of things, it’s overall campaign alone makes this a worthy purchase. Gone are the shackles of restricted movement or grid-like movements, instead the game takes on a more smoother and free-flowing pace that satisfies with its laugh-out-loud humour, lovable characters and engaging gameplay. There’s simply nothing bare-bones about it.

There’s nothing bare bones about the fun that can be had with Skulls of the Shogun: Bone-A-Fide Edition.