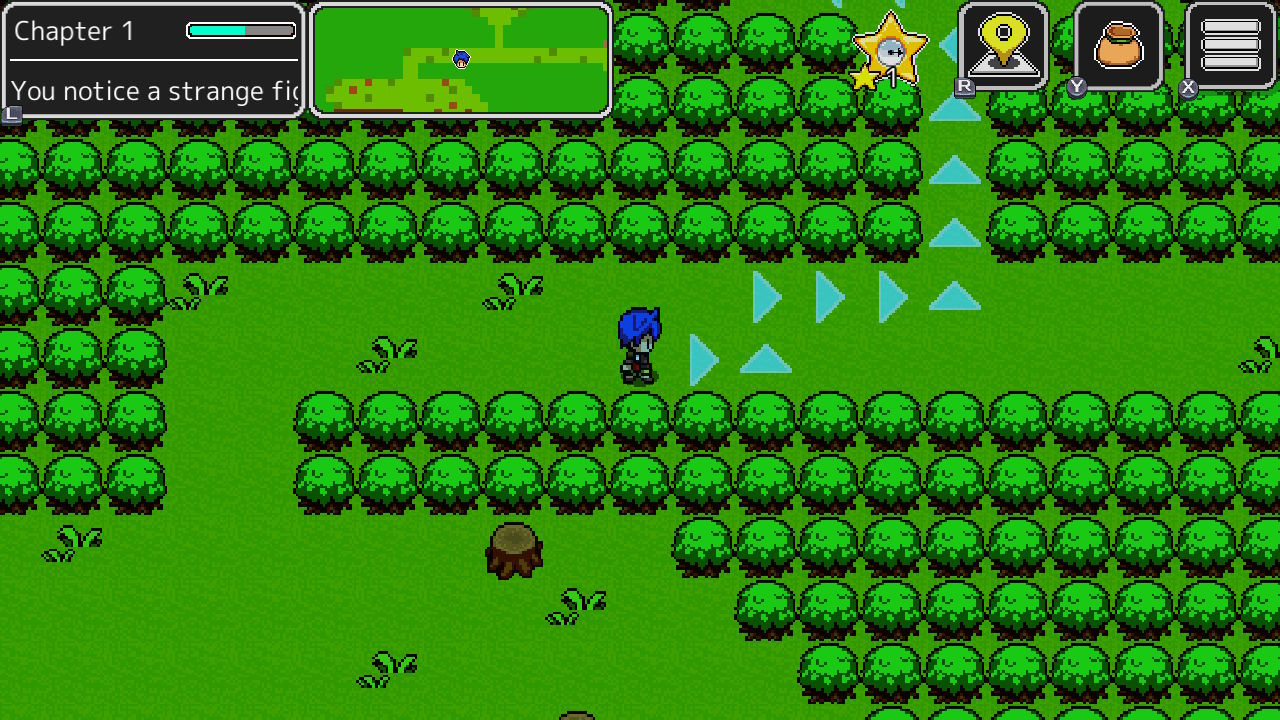 I still remember when I learned that some video games were made easier for folks in the rest of the world than they originally were in Japan. In fact, at one point, Squaresoft (before they merged with Enix and became Square Enix) released a game called Final Fantasy: Mystic Quest that, according to the back of the box, was “the world’s first role-playing game for the entry-level player”.  I’m probably one of the few people who actually enjoyed it, and now, more than two decades later, Hit-Point Co., Ltd and KEMCO are attempting something similar with Archlion Saga.

Archlion Saga is a very brief turn-based RPG. In addition to being far shorter than most RPGs, it’s also very simplified. Numerous systems and alterations to the basic formula nudge the game into territory that’s almost perfect for newcomers to RPGs without it insulting a player’s intelligence. For example, if you’re ever unsure of where to go, you can simply press a button and the game will present you with an exact path to follow (shown in the image above). Also, while you’ll typically face off against more than one enemy and amass a team of your own, each character and enemy doesn’t get their own turn; Archlion Saga‘s turn-based battles are handled one team at a time.

What was particularly terrific about Archlion Saga was just how many systems are added to the game to facilitate this simplicity. Teams don’t have MP or SP or AP to worry about, just HP. Each character still has skills to use, but those skills automatically come into play and regenerate according to their own rules. Katrina’s Gentle Magic skill which heals the party can be used after three turns pass and, once used, can be used again after four turns pass. Meanwhile, Bram has two dual skills – Forbidden Spell and Bite of Pity – that work depending on your current HP total, and Mona’s Small Blade skill can be used at any time, even back-to-back, but it can only be used three times per battle. Bram’s skills are especially intriguing, as they allow for a unique strategy: if you start a battle at just over 50% health, you can use his Forbidden Spell on your first turn, and then once you take damage you’ll fall under 50% and can use the Bite of Pity skill. At one point I was able to obliterate numerous random encounters in a row this way, and it made me feel like a genius. 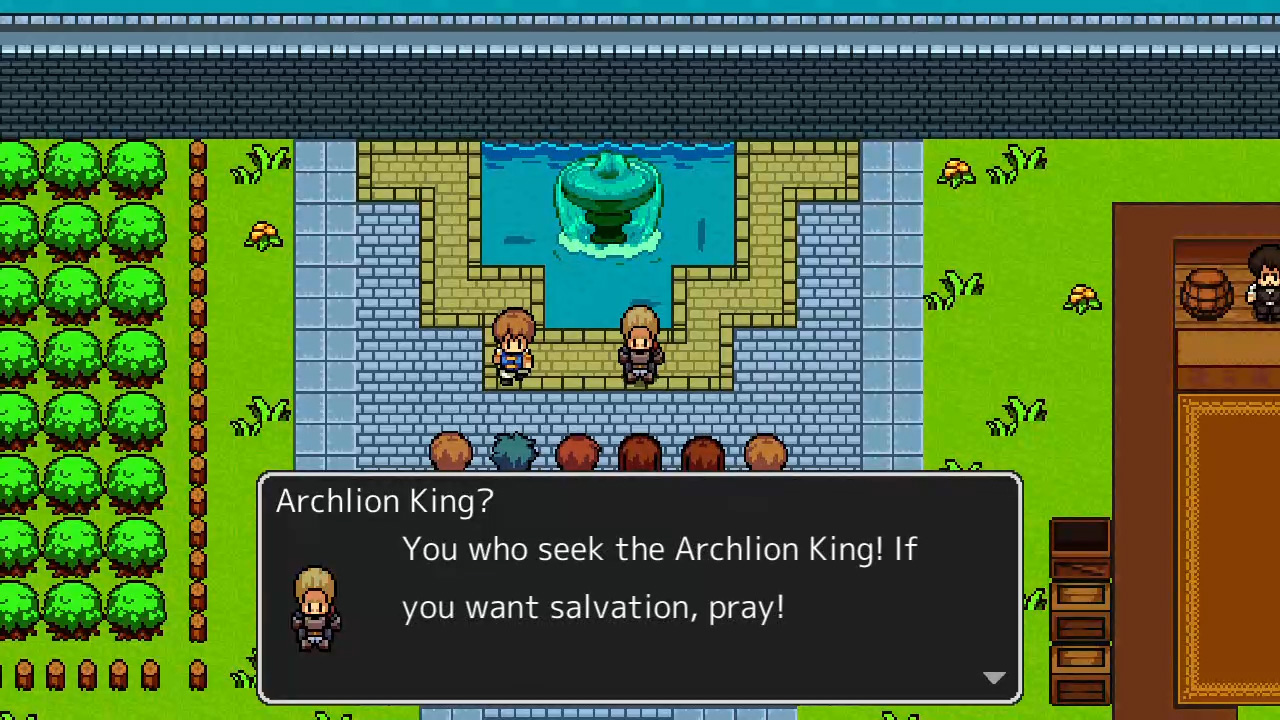 I also loved how simple the equipment system is: you have a weapon slot and an armor slot for each teammate, and that’s it. I do wish that you could compare what you currently have to what shopkeepers are selling, but once you’re in the equipment screen you can easily compare them. There’s also a (relatively) limited number of stats to worry about: you’ve got HP, attack, defense, combo rate (critical hits), and evasion. All of these are simple to understand, and your team’s stats is merely all of your characters’ stats combined.

Other things are simplified as well. Anything that can be interacted with has a symbol pop up when you get close, so there’s no reason to try to interact with every object in the game. There are also no choices when gaining levels, and aside from a handful of equipment options throughout the whole game, there’s no customizing your skills or stats. There’s also no overworld; the game guides you from area to area, and once you’re done with one you can never go back. Finally, the inclusion of a Single Hand control scheme is excellent, as it makes the game playable with a single Joy-Con. As bad as drift is for lots of people (myself included), this doubles the chances you won’t have to worry about it (Single Hand uses the right Joy-Con to play).

Like other KEMCO games, Archlion Saga has a special type of currency that’s separate from money. In Archlion Saga, it’s called Stars, and it’s easily the weirdest thing about the game. These can be used to double EXP and Gold gained from a battle (they work great on boss battles!), to fully revive you in battle without having to restart a fight, and to open treasure chests and some gates required to progress in the game. They can’t be bought with real money (Archlion Saga has no microtransactions); instead, they can be found lying around on the ground, and you get one every 10 minutes. I used them on every chest I came across and a few boss battles and still had over a dozen left at the end of the game, but I’m mildly worried about people who don’t know better and use them after every battle. If you were to run out of them and come across a gate that requires one to progress, you’d be stuck waiting until the timer gives you another one.

In addition to the potential issues with the Stars, there are a few other issues with using Archlion Saga as an introductory RPG. Perhaps the worst of all is the inclusion of Auto mode. Auto mode only uses standard attacks, which almost guarantees death later in the game. It’s also very easy to accidentally trigger it, especially if you don’t use the Switch often: pressing Y opens the item menu while X triggers Auto mode. There’s no prompt to double-check if you want to do it, so one time when I was almost dead and wanted to use an item I accidentally turned on Auto mode which killed me. 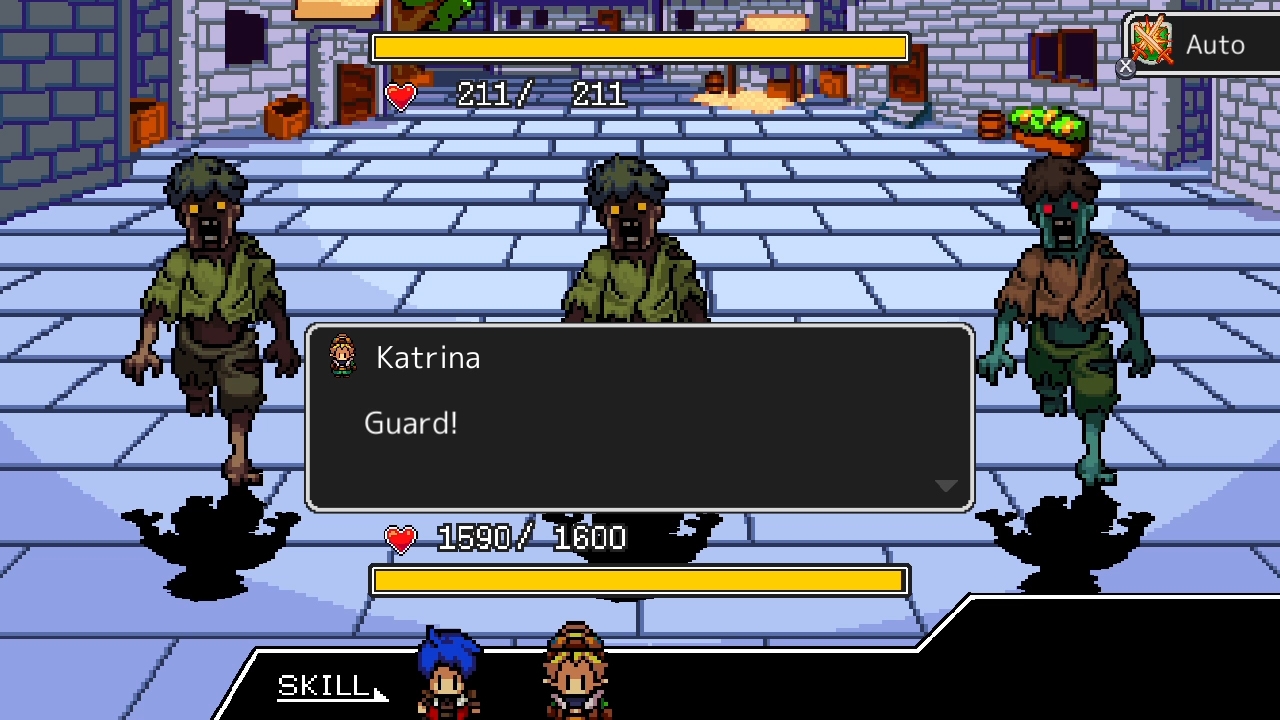 I was also really surprised by the end of the game. Without spoiling anything, the difficulty ramps up from “one regular hit does 1,000% of an enemy’s health in damage” to “yeah you’re probably gonna die if you don’t grind a lot”. One boss even had a difficult rhythm to predict: sometimes an enemy will “charge up” and you can merely block the next turn so their huge attack doesn’t do much damage, but this boss “charges up” and then seems to use super-powerful attacks for 2-4 turns in a row, any one of which could be the REALLY powerful hit. I have nothing against walking around and grinding out random battles, and if you’ve got a bunch of Stars like I did when fighting that boss, you can just revive yourself over and over until they’re dead anyway, but the challenge really seemed to come out of nowhere.

Finally, the story reminded me a lot of JRPGs in both negative and positive ways. Archlion Saga starts off with your mother sick, marked with a fatal disease that only the Archlion King can cure by defeating the True Night. But the Archlion King is nowhere to be found until you rescue her from her own attempt to sacrifice herself and you’re found to be the Archlion King… kinda. Your quest is to find others with the mark of the Archlion King (like you) and defeat the Serpent to cure everyone afflicted with this mark, but things get overly complex along the way. It’s like the writers had a terrific story and then ripped most of it out to shorten it, but accidentally took some important things out as well. The end packs a bit of a punch, but the jab could’ve easily been an uppercut if there was more foundational work done.

With all of that said, Archlion Saga is still a unique experience that I’d recommend to newcomers to JRPGs. The price point is excellent, and I loved that entirely new (to me) systems were incorporated rather than merely making a game that’s painfully easy. It’s also absolutely perfect for anyone who has a few hours to kill and wants to make their Switch last: I beat it in just under 3 hours, leaving me with around 40% of my Switch’s battery life without having to recharge it! I was really blown away by how little it used the battery even though I didn’t dock my Switch once. This is especially amazing compared to my current obsession (Dragon Quest Builders 2) which completely drains my battery in about 1.5-2 hours. I really wish Archlion Saga had a New Game+ mode, though, or some additional things to do after completing it. And hey, Hit-Point Co., Ltd and KEMCO: if you make an Archlion Saga 2 – whether it’s another short title like this or a full-length release – I’ll definitely snag a copy of it.

Archlion Saga is still a unique experience that I’d recommend to newcomers to JRPGs. The price point is excellent and It’s perfect for anyone who has a few hours to kill.