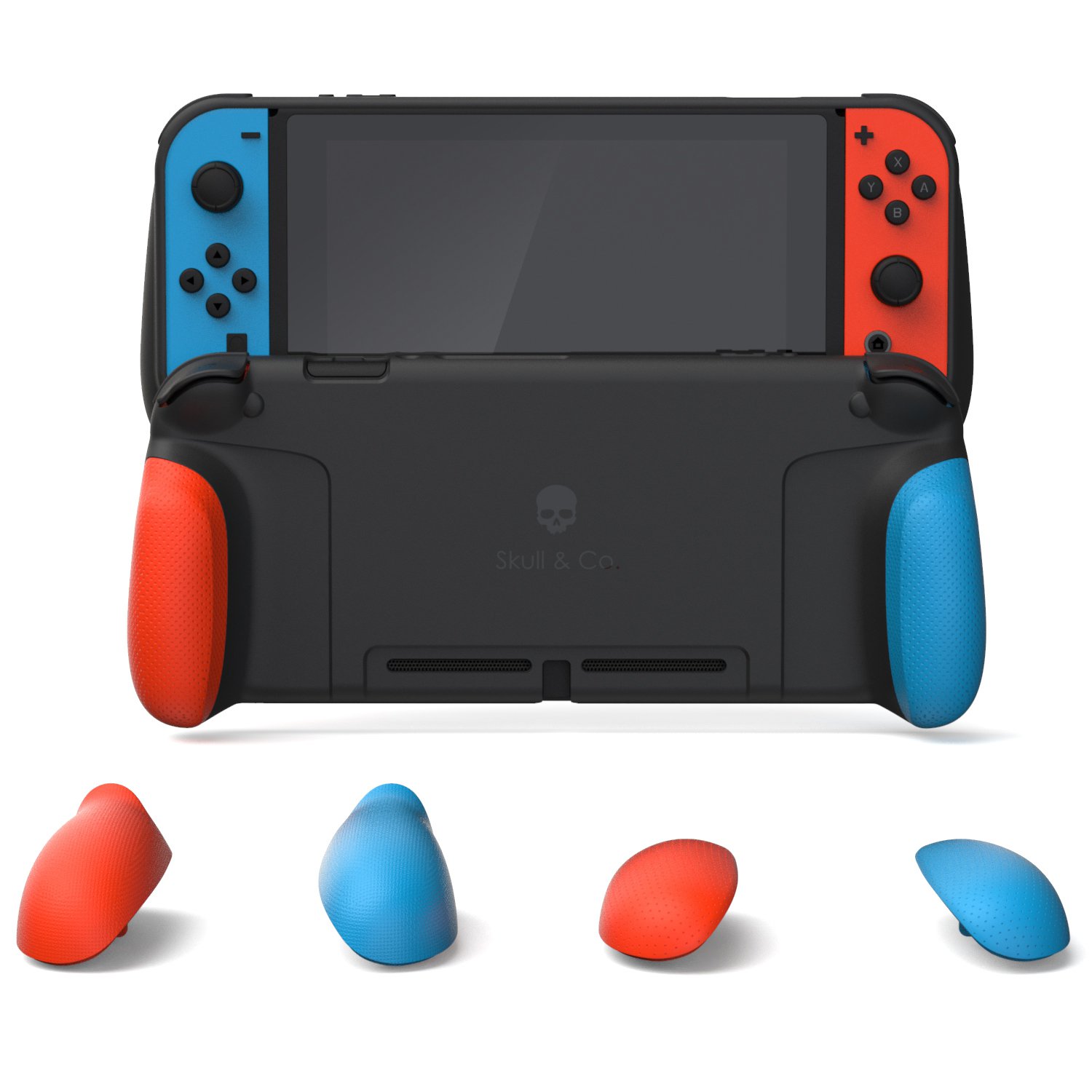 It’s rare that I decide to review any piece of accessory or hardware for a gaming system. By and large, a lot of things come down to personal style and preference, and what people like and don’t like about their systems. For example, I bought a USB keyboard for the Switch some time ago, but never felt the need to review it because it was a keyboard, it worked, and that was that. But I was compelled to go ahead and take a swing at reviewing my newest addition to the collection because it actually carries a bit of weight with it, and I enjoyed the hell out of it, and it actually could lead to a whole new world with my Nintendo Switch. This is the GripCase from Skull & Co, a gaming accessory company out of Australia.

The GripCase is a bit of a high branded skin that wraps around the Switch, covering everything except the screen itself. The cutouts along the top and bottom allows for Switch breathability, as well as docking, headphone port access and switching of the gamecards. There is no easy access to the microSD slot, so that does require removing the skin in order to get to it (a bit of a turnoff if you carry multiple cards to support all your digital purchases). Installation, if you can call it that, is incredibly easy: simply slide the Switch with JoyCons attached into the top of the case and then click the bottom into place. It comes on and off within seconds, and makes for simple removal if you need to change the memory card or adjust the snap grips (more on those in a second).

In my experience, I’ve avoided getting cases because of the alteration of the Switch’s primary form factor. I don’t want to feel like I’m holding something other than my Nintendo Switch, and a lot of more minimal skins because they appear slick and create the potential for me to drop my beloved device. With the GripCase, that worry disappears the second you pick up and hold your device, wrapped in its new protective layer. There’s a good amount of friction, even after playing for over a half hour straight, so I never feel like my sweaty hands (especially in summer) are going to lead to the demise of my favorite pastime. The GripCase is snug, adding very little extra bulk to the main device, while still creating a visible layer of protection and aesthetic appeal (I personally was able to get to the GameCube edition, which is temporarily out of stock). 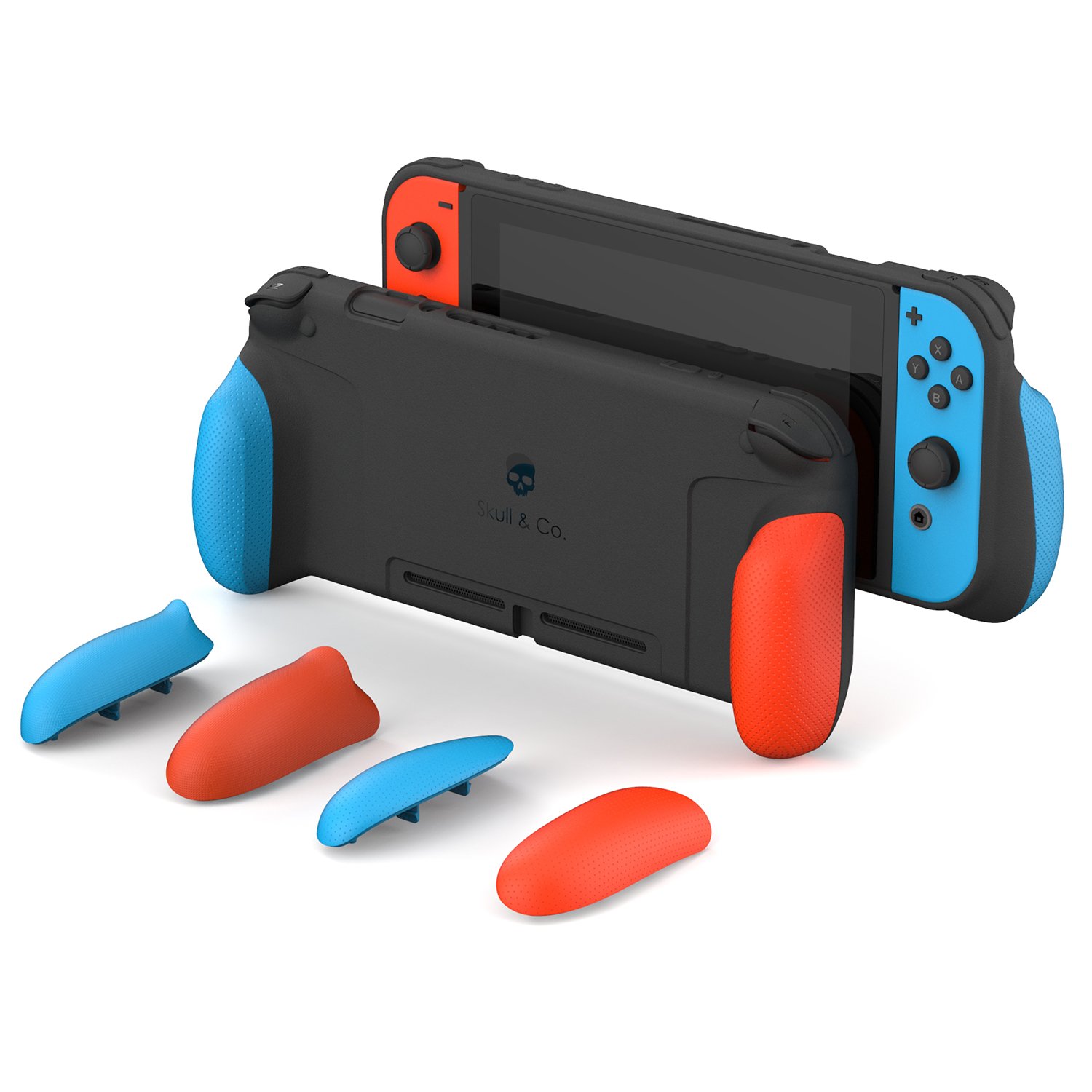 Additionally, the GripCase adds a bit to the gaming experience on a more technical level. Rather than letting your hands get cramped and go dead from a harsher “pincher” hold, the sizable grips on either side of the case allow you to contour the Switch to something that’s more natural and ergonomic for your play style. I personally sized down to the smallest size (the SnapGrip), which allowed for my muscles to be more relaxed and attuned to the Switch without sacrificing the extendability of my fingers. When I did take a swing at Doom 3, though, I went with the Triggergrip, which put my hands in a more prepared state for the FPS lifestyle. Additionally, the GripCase beefs up the size of the ZL and ZR buttons, which was invaluable for games where I need to make split-decisions on cycling through weapons or firing without a lot of extra thought. The larger pads means better spatial recognition for my hands without needing to physically look down if I’m really in the throes of play.

A brief and highly supervised drop test also showed me that the GripCase makes me feel more comfortable and confident about playing while moving about between rooms or in case of needing to quickly move somewhere and not being able to stow the Switch away. The TPU material is soft but shock-resistant, and I would absolutely recommend it to parents with small children who might be looking into Switches of their own. If Skull & Co decides to make one for the Switch Lite, I’ll be getting one immediately so that my daughters can enjoy moving about and playing Mario Maker 2, and I won’t be out of my mind if I hear the familiar thump of a dropped device. As an aside, the GripCase also fits well with most screen protectors available, so no need to worry about bubbling up or needing to keep the most important aspect of your device unprotected.

Now, the additional bulk does cause a couple of small issues for the GripCase. For one, the Switch in the GripCase will NOT fit in my carrying case that I’ve used since launch, which was a bit of a bummer. I forced the sucker in there and the result was that the zipper was bulging and I managed to force the power button to be held down, shutting off my system and losing progress in a recent game. Skull & Co does carry a specific case for the GripCase (called the Maxcarry Case), but I wasn’t able to afford that at this time and, as such, cannot speak for its effectiveness with the GripCase. Additionally, though the GripCase is still dockable, it is arguably snug and might make some people worried about long term use. As it stands, my dock and my Switch are as old as launch, and I’ve been incredibly lucky to not need to replace anything just yet (waiting for some JoyCon drift solution in my neck of the woods, however). I’ve been happy to simply slide my Switch into the dock and let that be the end of it. Needing to use any sort of force to make it slide down and dock doesn’t feel good, and makes me wary, so I advise against that. Again, Skull & Co offer their own dock as well (called the JumpGate), and I’ll hopefully be reporting in about that if the summer bonus is fair this quarter. 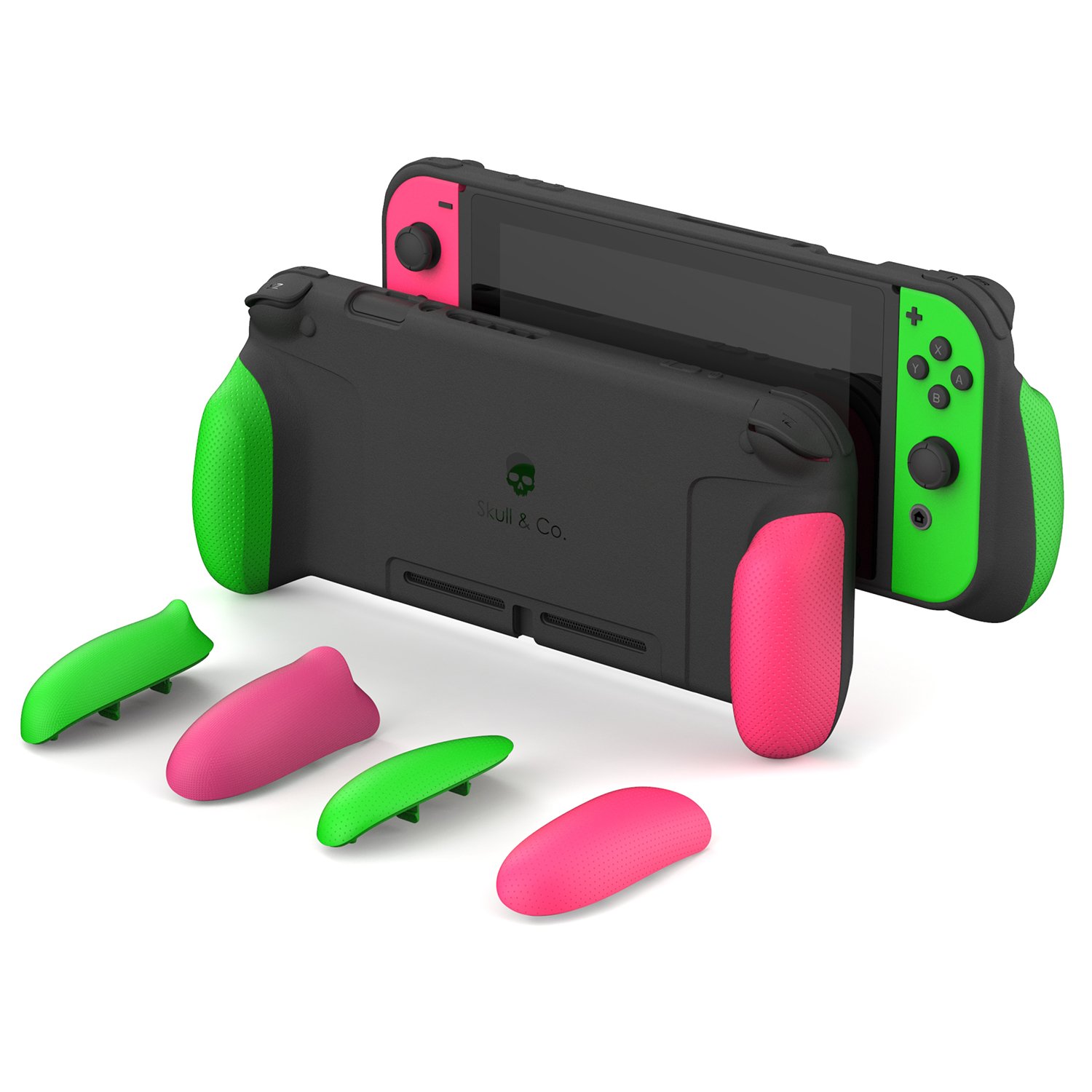 Lastly, I was able to score a set of the thumb grips, button caps and D-pad covers for the Joycons with my GripCase, and those are something else entirely. The cross-shaped D pad is a truly beautiful thing, creating a brand new style for the directional buttons and making the Switch feel more at home with the classic “Nintendo” idea. The button covers are cute and add a bit of aesthetic, but don’t really do much for play style and, on occasion, can feel strange if you switch between Joycon sets like I do. The different joystick grips are up to you and incredibly easy to change in and out, though the minimalist “skin” cover is what I decided was my daily driver. I wouldn’t say that my Joycons are worn down, but one doesn’t play games nearly every day for two and a half years without seeing some deterioration, and these covers breathe new life into the JoyCons without needing to dish out a ridiculous amount of cash in order to compensate for a new JoyCon set.

All in all, I was incredibly pleased with my GripCase from Skull & Co. It’s elegant, functional, feels good and looks even better. My discomfort with the way it sits in the dock might be personal at best, and there are clearly other cases out there that can safely hold the GripCase (specifically the Maxcarry, but we’ll cross that bridge at another time). The Switch is designed to travel everywhere with you, but that doesn’t mean it’ll be safe in every single scenario. If you’ve even considered getting a case for both play and protection, this is going to be your best bet, especially with free worldwide shipping.

A gorgeous, functional and comfortable case with minimal drawbacks that could be personal at best, the GripCase is going to be the best bang for your buck.