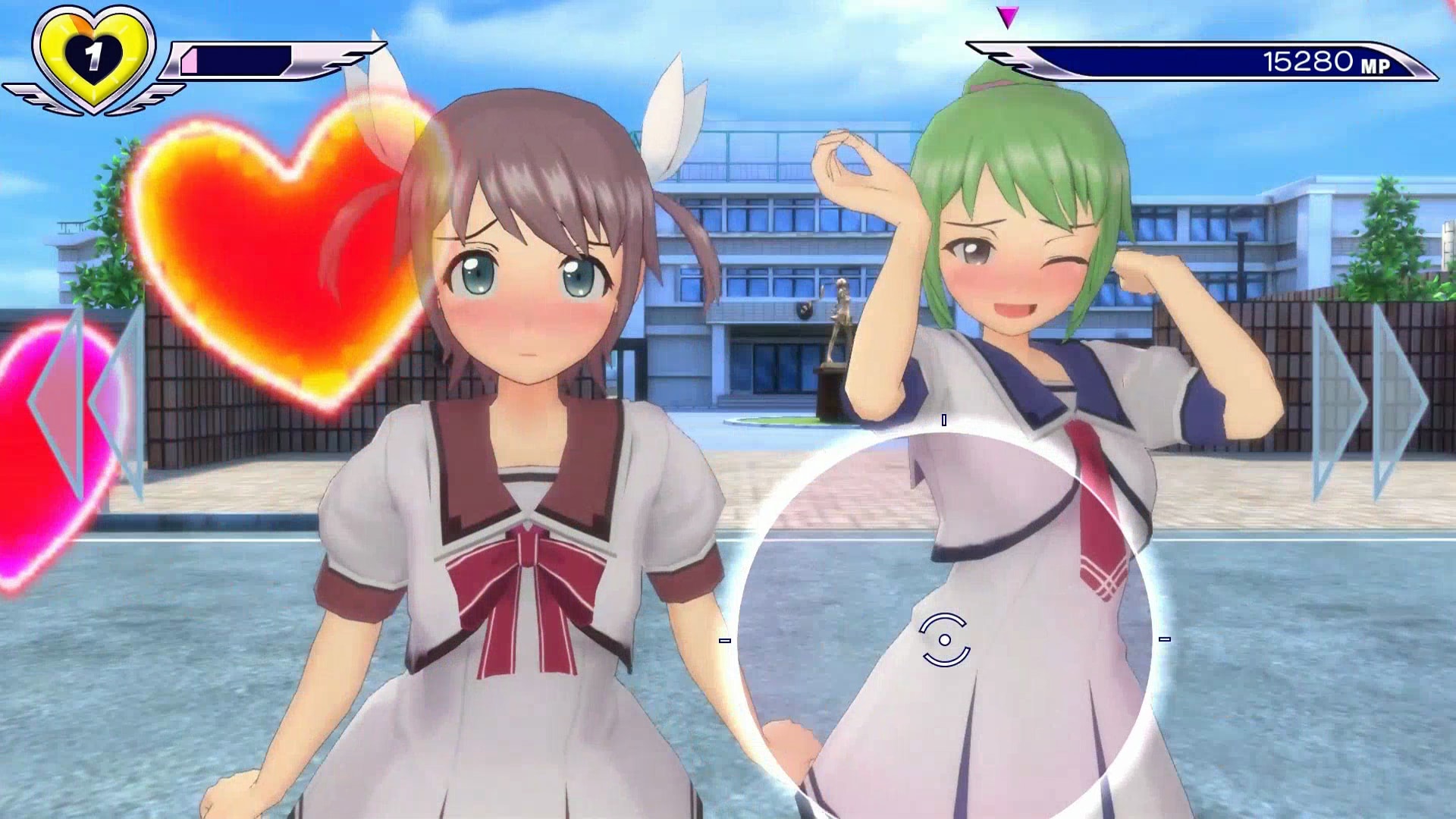 Where do you start with a game like ‘Gal Gun: Double Peace’? This title is a hilarious / glorious cross between an arcade rail shooter and an adolescent wet dream. Although a lot of the gameplay mechanics are reminiscent of titles such as ‘House of the Dead’ or ‘Virtual Cop’, the theme of the game revolves around being ambushed by wild nymphomaniacs that constantly blind you with up skirt crotch shots.

The plot is as bonkers as the premise. You play as a young college student named ‘Houdai’ who is having a bit of a bad day (or a really good one depending on your perspective). A couple of friends from his past (sisters Shinobu and Maya) are back in town after a three year absence. While trying to come to terms with his feelings of affection towards them he is struck by a cupid style shot from an incompetent angel named Ekoro. Due to a distraction while attempting to hit him she has accidentally used a fully charged shot that has made him irresistible to every woman and girl that he comes into contact with (reminiscent of some sort of Lynx commercial).

From this point onwards you have to go about your day while being constantly attacked by affectionate female students and even some of the teachers. The angel teaches you how to fire a shot of pheromones in order to neutralise surrounding threats, leaving them essentially love struck. Due to a development in the plot your powers have no effect on Shinobu and Maya, however I want to try and avoid spoilers where possible. Let’s just say that there is more to Shinobu and Maya than meets the eye, and if you wish to become the boyfriend of either of them you’ll have attract them in a more conventional manner.

The game is split between action sequences where you travel around your school shooting at the various girls that surround you, and dialogue section where you can speak to the key characters to learn more about the story and influence the game’s outcome.

During the action stages the camera travels down a path and you control an on screen curser with the analogue sticks. The R trigger allows you to zoom which actually has two functions. As well as being able to be more accurate with your shots, the zoom also allows you to look through certain obstacles in order to uncover hidden items and score bonus points. Shooting each girl enough times will result in them being love struck, however each target will have a sensitive spot which will reveal itself by examining the girl with your curser. If you can locate the sensitive spot you can knock them out with a single shot. It is possible to hold down the fire button in order to perform a charged shot, however I personally found it more effective to just be trigger happy and fire bursts of lighter attacks. If you neglect a target for too long she will begin yelling, attacking or smothering you which will cause you to take damage, so you have to clear the screen as quickly as possible.

For extra points there is a petting mini game which you can launch at any time providing you have shot enough girls to charge up your heart meter. Once your heart meter has reached a certain level you can select a girl (or multiple girls) on screen and pull them out of the action and into the mini game. Here you’ll be able to poke and prod the girls against the clock. You’ll have a limited time to discover their erogenous zones and if you can satisfy them they will burst into hearts which will clear all the other girls off the screen when you return to the action stage. 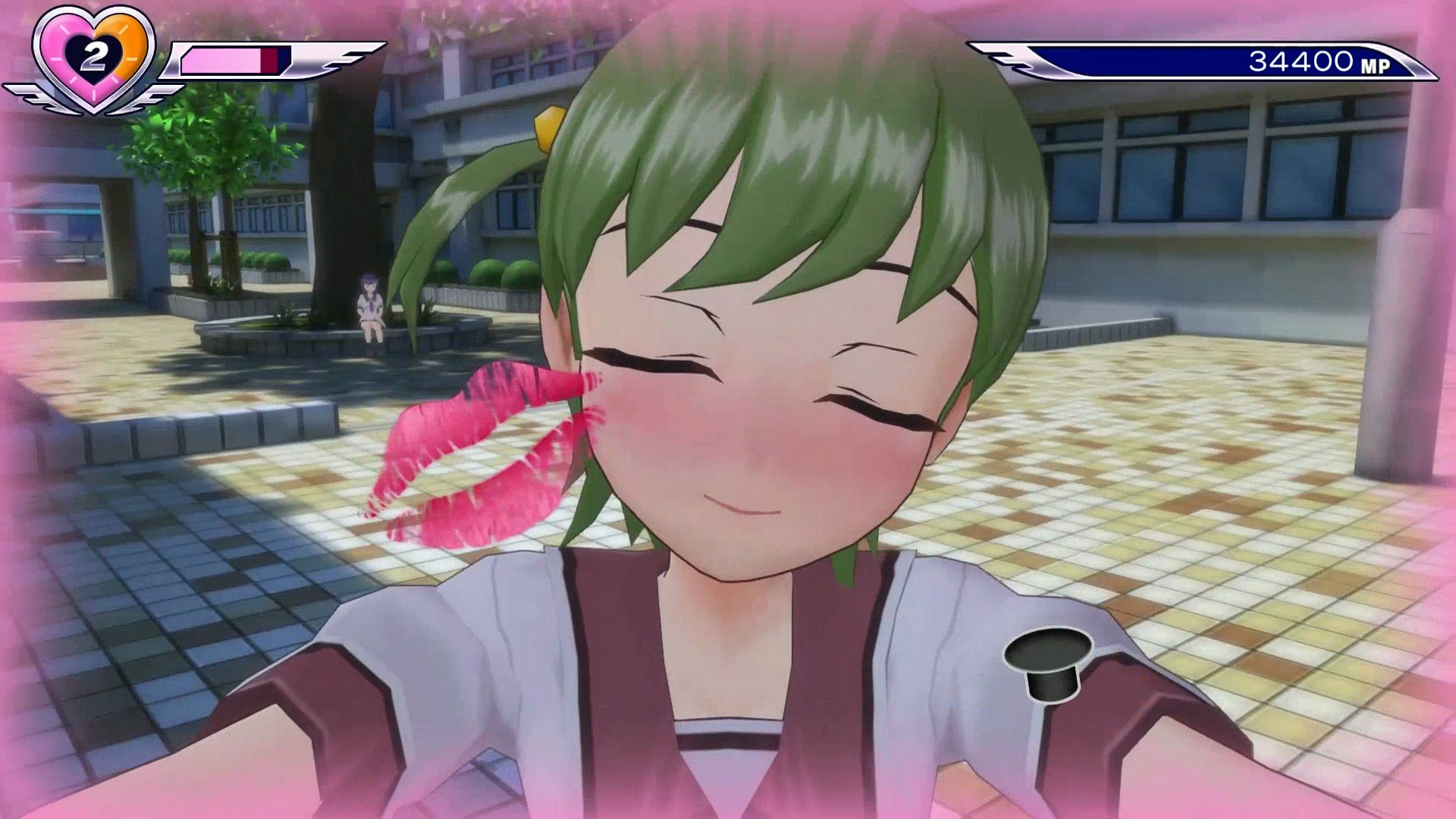 Outside of the action you get to talk to Ekoro, Shinobu and Maya. Every now and then a dialogue tree will open and you’ll have to choose how to respond. The choices you make will affect the girl’s opinion of you so if you are playing the game seriously it’s good to make smart choices. Having said that, some of the dialogue is so funny that you can be forgiven to just blurt out the most inappropriate choices just to see what happens. I can’t remember all the funny moments off the top of my head but there were so many instances where I was chuckling away thinking ‘this game is crazy’.

The story has multiple paths and various different endings. To influence the outcome you have to be familiar with a few different mechanics. When you begin a new run you’ll have the option to choose what type of young man you are. The initial choices are ‘Bookworm’, ‘Jock’, ‘Fasionista’ and hilariously ‘Pervert’ (guess which one I chose). More choices can be unlocked as you progress through the game. The type of person you are will have an effect on your opening statistics. These statistics include your ‘Intelligence’, ‘Athleticism’, ‘Style’ and ‘Lewdness’. These statistics will influence which dialogue paths you can choose when speaking to characters so it’s a good idea to try and keep these as high as possible.

A single run will be split into 8 chapters. After the first chapter you’ll be asked which of the five main story paths you wish to play. Each chapter will include two action levels, possibly a mini game or boss, and various encounters with characters which will give you a chance to interact and influence the direction of the run. Depending on how much attention you’re paying to the dialogue, a run typically last between 90 minutes and two hours.

After completing an action stage your score will be added up so you can monitor your overall rank. You’ll also be given a set amount of feathers which can be used as currency to buy upgrades such as more health, more powerful shots and items that can further influence your statistics. Before each stage you can keep an eye on your phone for bonus tasks that you can complete for students to earn extra feathers. By keeping an eye on student’s requests you’ll have a better idea of what locations you should explore when choosing an action stage to play.

Depending on the path you take, you can find yourself in some awkward situations. One that immediately springs to mind is when Shinobu gets stuck in a window with her barley covered pronounced bottom sticking up at you as you attempt pull her out. A similar sequence is when Maya gets her hands and feet glued to the ground and while attempting to free her she ends up contorting her body into various compromising positions.

Despite the game’s crudeness it’s actually beautifully presented. I’m not a fan of Japanese animation but the use of cell shading to turn a fully fledged 3D environment into what looks like a wonderfully rendered cartoon is something I can really appreciate. The various characters are nicely animated with dynamic facial expressions and the environments feel genuine and vibrant. 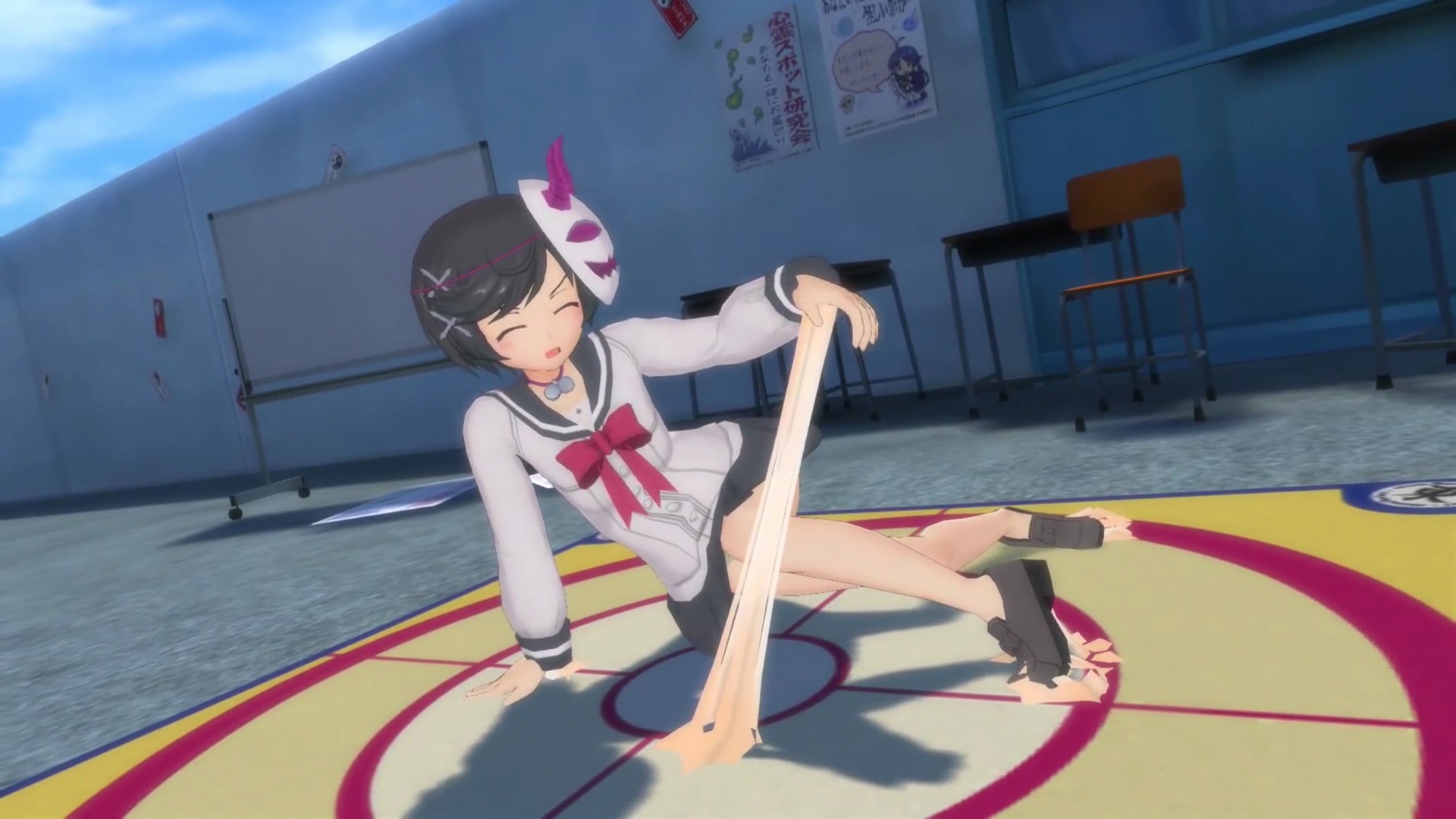 A lot of the music in GGDP repeats throughout the stages, however it does have a wonderful opening theme, complete with an animated music video. The song is called ‘Bang Bang’ and although I can’t understand a word of the lyrics it is extremely poppy and uplifting. It really sets the tone for the entire game. Speaking of not understanding the lyrics, there is plenty of recorded dialogue throughout the game however it is all in the native Japanese, so unless you speak the language you’ll have to make do with the English subtitles.

One thing I can really commend this title on is the wide variety of options. Not only can you fully customise the controls but you can adjust the text speed, subtitles and even skip the prologue if you’ve played before.

Although I did enjoy this title for the action sequences, it really wasn’t very challenging at all. There are two difficulty settings labeled ‘beginner’ and ‘expert’, although I think calling the second mode ‘expert’ is a bit of an exaggeration. I was able the sail through beginner mode to the extent that I didn’t even bother upgrading my health bar. In expert mode the girls are a little more aggressive and their attacks do far more damage, however by purchasing a few upgrades the average player shouldn’t experience any friction here.

My overall feelings towards this title are mixed. It’s a decent enough game that I have certainly had some fun with and the theme is indeed amusing in a Benny Hill type of way. However, although this game encourages multiple play throughs via various paths it can all get quite repetitive after a couple of runs. Unless you’re actually engaged in the story (which would surprise me) I don’t think the gameplay offers enough variety to keep you interested through the entire experience. In short, the story outlasts the gameplay by quite a margin.

As far as the ‘lewdness’ goes (for lack of a better term) there may be some value here for a younger man but I’m guessing this sort of soft animated porn is only appealing to a very specific audience. That in itself is great and if this sort of thing appeals to you then I’m sure Gal Gun will be very satisfying, however I can’t really recommend it to the mass audience of gamers. This is where I fear Gal Gun’s biggest problem lies, as it caters to such a niche following that the chances are anyone who is interested in this type of product already knows about it and has bought it, whereas most gamers who are not into this kind of kink probably won’t find enough of a compelling game here to invest in.

The RRP in the UK is £49.99, although I have seen physical copies that are a little bit cheaper in stores. For the average arcade shooter fan you’ll probably be better off using that money to buy a second hand Wii and a copy of House of the Dead. At least then you can experience something closer to an authentic arcade. If you’re curious about this game and want to play it for yourself I would recommend waiting until you see it in a sale. I personally had fun with it and was impressed with the overall presentation, however the repetitive gameplay leads me to feel that it is still quite overpriced.