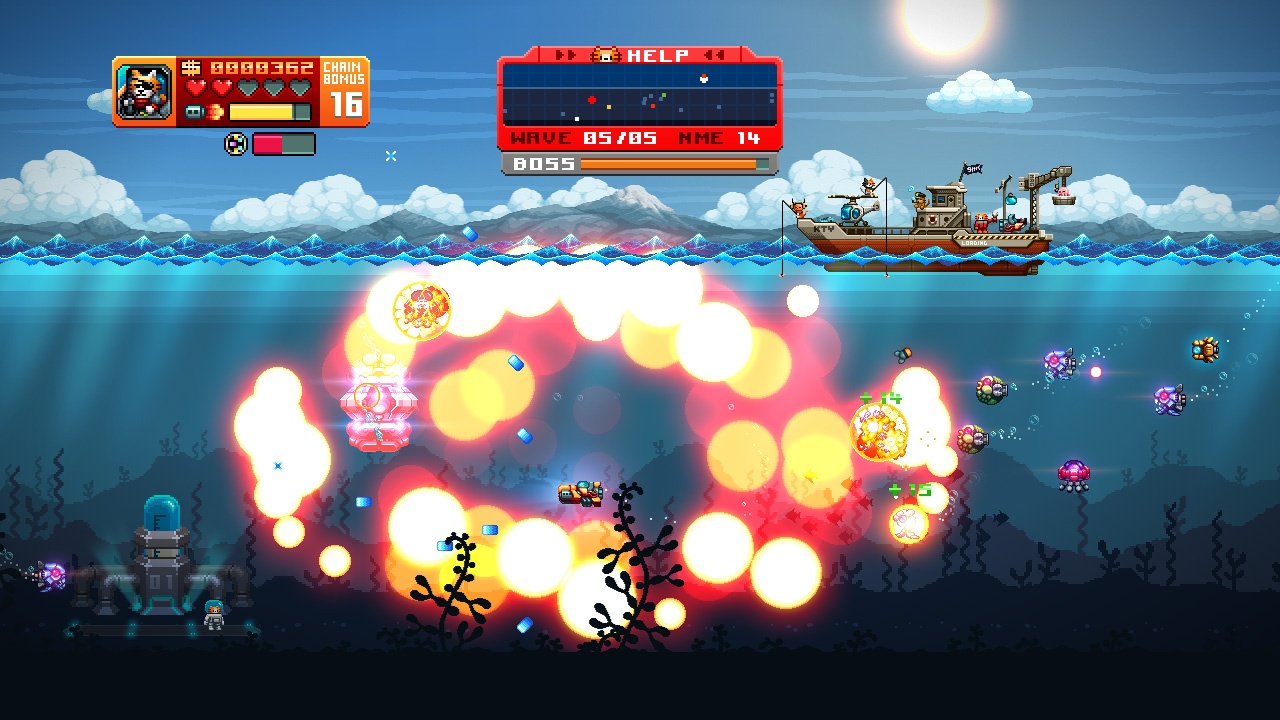 The internet is more appreciative of cats than of people for a majority if the populous. Sure, people are cool and they invent stuff like Hot Pockets and penicillin, but cats are these adorable, angry things that allow humanity to be in their presence. They give affection very sparingly, couldn’t care less how expensive your new sofa is, and will eat your corpse minutes after you die if their dinner wasn’t prepared beforehand. Yet, somehow, they became the animal mascot for the collective intelligence that spreads online, and we honor them with videos and memes like it’s mythological Egypt up in this place. And video games are hardly new frontier for the feline overlords: things like Fort Meow, Mousecraft and various cat-themed Skyrim mods all have clear prejudice in favor of cats. But for cats to make the next big move in terms of exploration and preservation, that is something exciting to behold, even if it’s just a fictious setting.

Aqua Kitty UDX is the juiced up and spruced up version of an already popular Steam and Playstation title AQUA KITTY – Milk Mine Defender DX, and it’s landed on the Nintendo Switch with, surprise, all four paws on the floor. At some point in the future, the milk supply of the world has almost run out, resulting in the cats being generally sad and needing more nourishment. Far from working on more cows or synthesizing a version of soy milk that tastes good, the cats have discovered rich deposits of milk far below the bottom of the ocean. Realizing this may be their last shot at true dairy happiness, the cats invest in creating underwater mining structures to help extract that sweet, sweet milk. Strangely, the underwater sea denizens are less than thrilled that cats, who historically eat fish, have moved into their neighborhood, and they’d like you to leave posthaste. To help along this process, the fish have evolved overnight to have mechanical appendages and are willing to blow you up with lasers, because I guess Darwin forgot to cover that chapter. Anyways, you gotta defend those poor miner cats from being abducted by fishies in your awesome submarine. The milk must flow!

All massive logistical issues aside, Aqua Kitty UDX is a side scrolling shooter with an infinite loop on the screen so that no one simply disappears, they just swim too far and reappear on the other side. You’re at the helm of a cute ship that can fire only one direction (initially) and can turn on a dime to swim the other way and deal with wave after wave of enemies coming to disrupt your mining. As your miners become bolder and open up more platforms, so do the fishes, becoming larger, angrier and more powerful overall. Keep the sealife at bay for several waves until victory is declared, and get some extra bonuses for not having miners get abducted in the process. 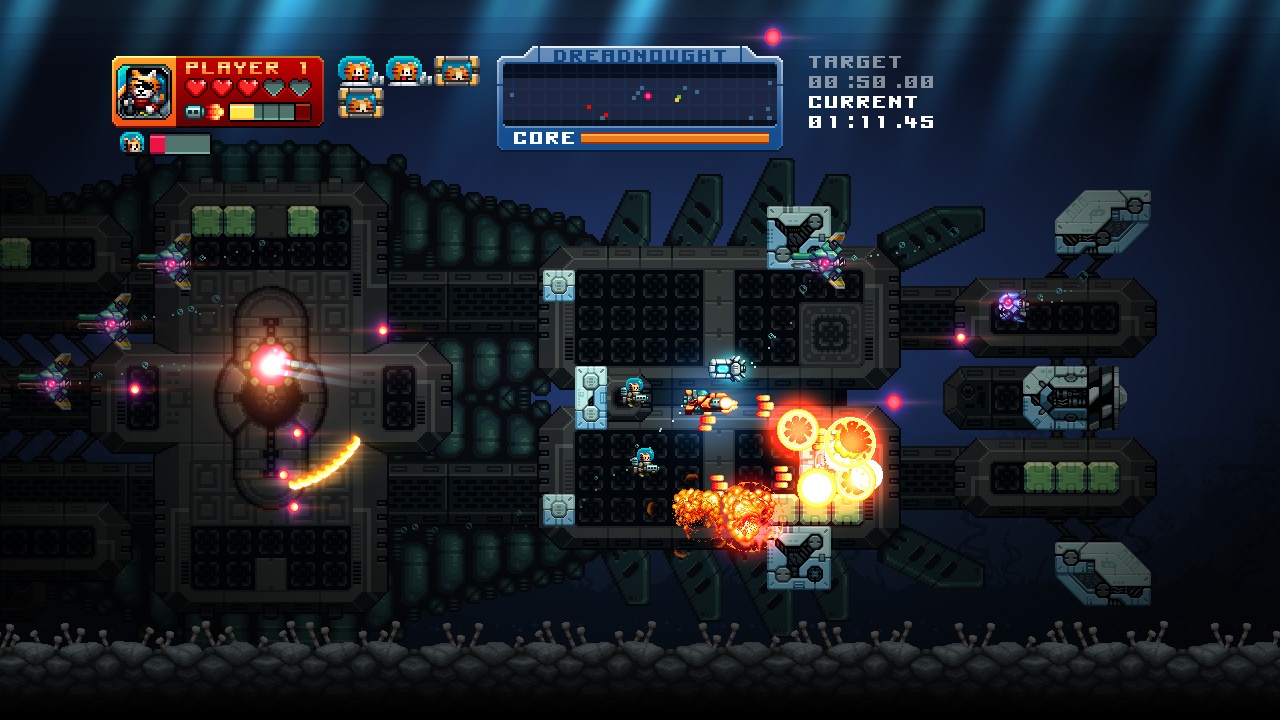 First and foremost, the game is adorable. Done up in a good density pixel art style, the kitties are quite endearing, even when they’re yelling at you between levels to do a better job and get more milk for them. The color palette pops in every direction, and there’s nothing about this game that has a vicious, sarcastic or bitter bone in its body. Despite the idea of needing to shoot up everything that appears on the screen, there is no violence or anguish that’s held within: this is simply a cute game where you need to blow up the bad guys to save the good guys, who happen to be cats. This is something that I was very comfortable playing with my kids, who have been a bit hesitant to enjoy games with me after I made a bad call with Batman: the Telltale Series. No dead bodies in this one!

As a shooter, Aqua Kitty UDX is pretty straightforward to the point of being bland at times. You have two weapons, a regular, unlimited shooter and a rapidfire gun that has limited ammo, but can be recharged simply through destroying bad guys. There’s also powerups that float around and randomly can be used to generate more health, extra directional shooting (limited time) or trigger a massive bomb to blow up everything in proximity. For the most part, the powerups are, excuse me, worthless in the grand scheme of things. The only one worth consistently getting is the health recharge, and you won’t even need it a majority of the time. On normal difficulty, anyone who’s done literally any variation of a horizontal shooter will have zero problems. You don’t have a ton of dexterity in terms of control, but you have enough, and that’s really all you need. Some enemies will take more hits. Some will shoot back at you. Some will even explode or need to have multiple parts of their ship destroyed before they go down. But you can still deftly move around and deal with it all without needing to break a sweat. You just get into a good rhythm of shooting until your super shot is ready, blowing up the bad guys trying to abduct your miners and calling it a day.

And that’s not necessarily a bad thing. With such simple concept and execution, Aqua Kitty UDX allows for the player to focus on whichever aspect of this shooter they’re most interested in. Want to get a high score? Cool, work on chaining together every single enemy and not getting hit once. Need to see that threadbare storyline evolve? No problem, use the radar to focus on the red spots first (the enemies who’ll abduct the kitties) and then blow up anything else incidentally, making the game move forward fastest. This isn’t going to be a shooter that’ll challenge the bullet hell crowd or even the Gradius cultists, but it is cute and fun, and it has plenty of bells and whistles to make it worthwhile. For example, two player co-op with this kind of gameplay turns something that’s kind of easy into something ridiculously easy, and you have a good time doing it. 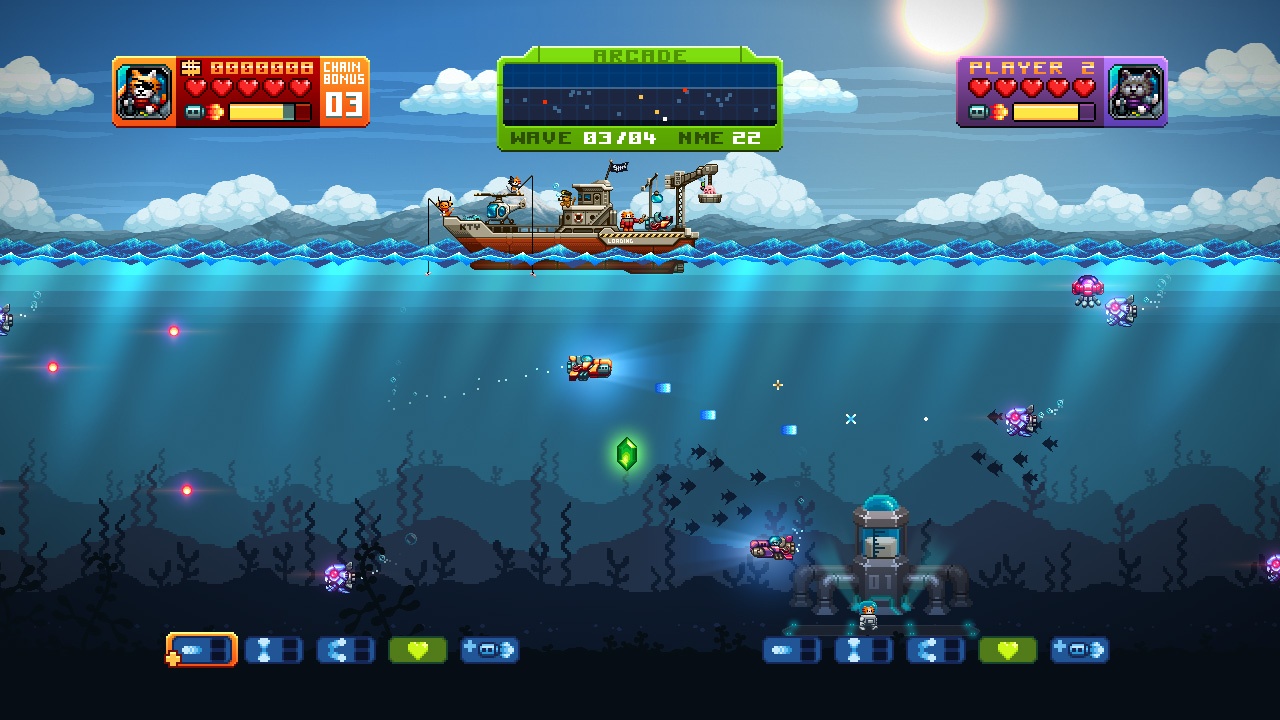 If you really want a bit of a challenge, there’s endless mode to test out your endurance, but I’ve never been a fan of just shooting forever. Instead, take a different approach and check out the Dreadnought mode that’s exclusive to this version. There’s these new, dangerous mega ships that are polluting the water, and your intrepid hero must dive down and defeat these ships, blowing off chunks at a time until you awaken the core, which has its own defense mechanisms. This was so wildly different than the main story that I fell in love instantly and focused on blowing up these ships before even finishing the main quests. There’s just a different level of skill and involvement with the dreadnoughts, and I would happily buy this game again if the development team decided to make a followup of just dreadnought fights.

All in all, I’m really happy with what Aqua Kitty UDX is. There’s a lot of light, fun shooting balanced by some odd control choices that slow you down but ultimately work well. There’s arcade elements to keep it replayable if you love the cats, and two player mode for the friend who doesn’t really play games but likes oddball feline situations. Really, if there’s something that sells a game in my eyes, it’s being fun, and Aqua Kitty UDX nails that right on the nose.