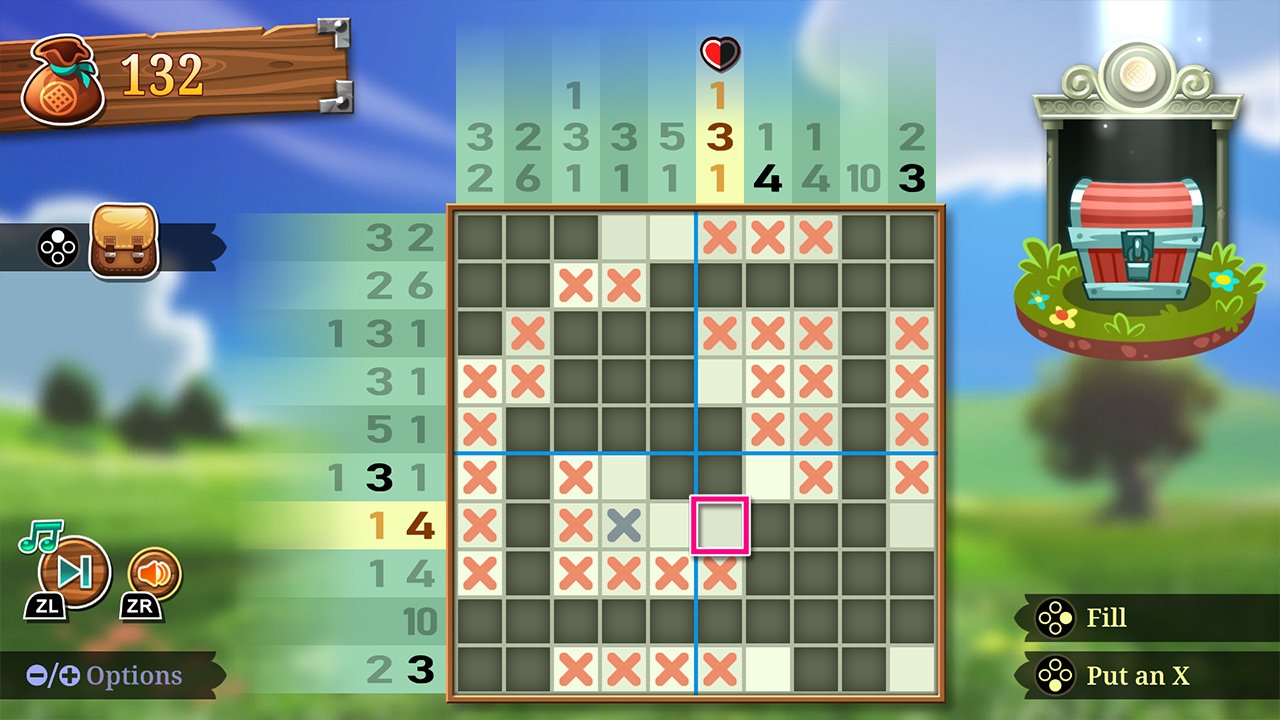 I’m quite partial to the odd puzzle or role-playing game, after all, they can offer a refreshing change of pace from the usual nitro-filled affairs of racing or shooting; plus there’s the added bonus of keeping our brains finely-tuned through logic and tactical thinking. One of my favourite styles of puzzling comes in the form of Picross-type grids that create a picture through the succession of filling in certain squares. However, many of these types of games present you with a basic premise in presentation and gameplay; often leading to a game that is suited to a casual play style or just ends up feeling a bit stagnant. Well, thanks to developers, NanoPiko and publishers, Plug in Digital, this style of puzzle has been given a new breath of the wild with their ingenious injection of role-playing mechanics in their latest title, PictoQuest: The Cursed Grids as it ventures a release onto the Nintendo Switch.

The game marries certain elements of the Picross-style of puzzling with some light RPG mechanics that sees you traversing a world map, completing side quests and collecting gold coins in order to purchase helpful items from a number of in-game stores. It all revolves around a story that runs largely in the background, but contains enough weight to give you a reason to keep playing and adds that much needed ingredient that forces you back time and time again. From the offset, you choose between two heroes with which to venture forth: Floh, a young boy and Arvel, a young girl. They reside within the land of Pictoria, a kingdom graced with the most beautiful pictures the world has ever seen. However, as the pictures begin to disappear, an evil being known as Moonface emerges as the culprit and it’s up to our daring heroes to recover the lost pictures and bring the land back to its former glory.

Despite the game containing a role-playing element, this is primarily a puzzler. Because of this, the story only plays a back-role in the development of its gameplay. However, this isn’t necessarily a game that need to rely on a narrative to push it forward, as the journey you undertake and the mechanics around its puzzles pushes you ever forward. The structure of the game is based around a world map with a path that leads to a variety of destinations. These usually come in the form of Picross puzzles, although you also come across a series of side-quests that present different challenges to the normal puzzle-solving style, as well as a series of fast-travel points and shops in which to stock up on some much needed buffs and boosts. 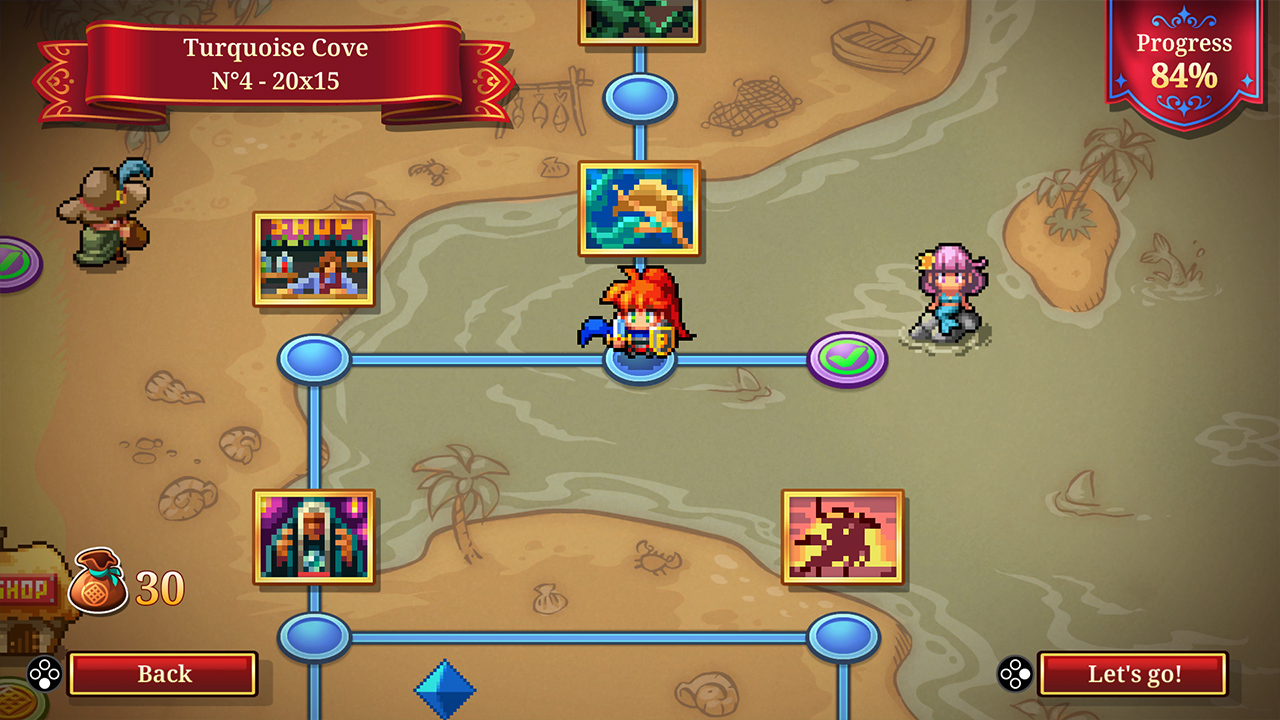 For those who aren’t familiar with Picross, these are a set of puzzles that come on a series of blank grids that can range in numbers from 5×5 through to 10×10 and 15×15, plus more. Around the edge of the grid, a series of numbers denote the total of squares that need to filled in on a horizontal or vertical axis. Sometimes these values require the whole line to be filled, whereby others may contain two sets of numbers that requires certain squares to be filled with gaps in-between them. It requires a certain logic to work out the solutions to these puzzles, but as you progress a pattern begins to emerge in how to solve, or create, each picture within the grid. It’s a simple premise, but one that offers a decent challenge in their solution. However, PictoQuest does a sterling job of breaking you in gently into its gameplay and mechanics, making sure you are familiar with its logic as you progress.

Each of the puzzles contain a picture that relates in some way to its role-playing elements. You can create pictures of slime monsters, axes and potions, as well as many more. Once each grid is complete, the pictures come to life with a wash of colour and animation to make it distinguishable; something that many Picross-styled games lack. What makes this puzzler distinctly different from other puzzlers though, is its addition of other factors that revolve open opening chests and battling monsters on your way to finding the solution to each problem posed. You begin each puzzle with three lives, denoted by a trio of hearts, or a total of accrued gold coins thus far. Depending on whether you are tasked with opening a chest or fighting a foe, these values decrease should you make a mistake on placing a square within the grid. Make a mistake on a chest and you lose some gold, do the same when fighting and you lose a portion of your heart.

Chests offer a more relaxing style, leaving you to concentrate on solving the puzzle. Monsters, however, contain a life bar that needs to be whittled down, as well as an attack gauge that deals damage as it fills with time. In order to repel any attacks, any completed lines, whether vertically or horizontally produces an attack of your own. Complete the puzzle and you advance to the next stage, as well as defeat the monster that guards each picture. Should your foe deal enough damage, through you being too slow or making too many mistakes, and diminish your hearts, then you need to start the puzzle again. It offers a nice take on the puzzle genre and adds a genuine layer of urgency to solving each picture. 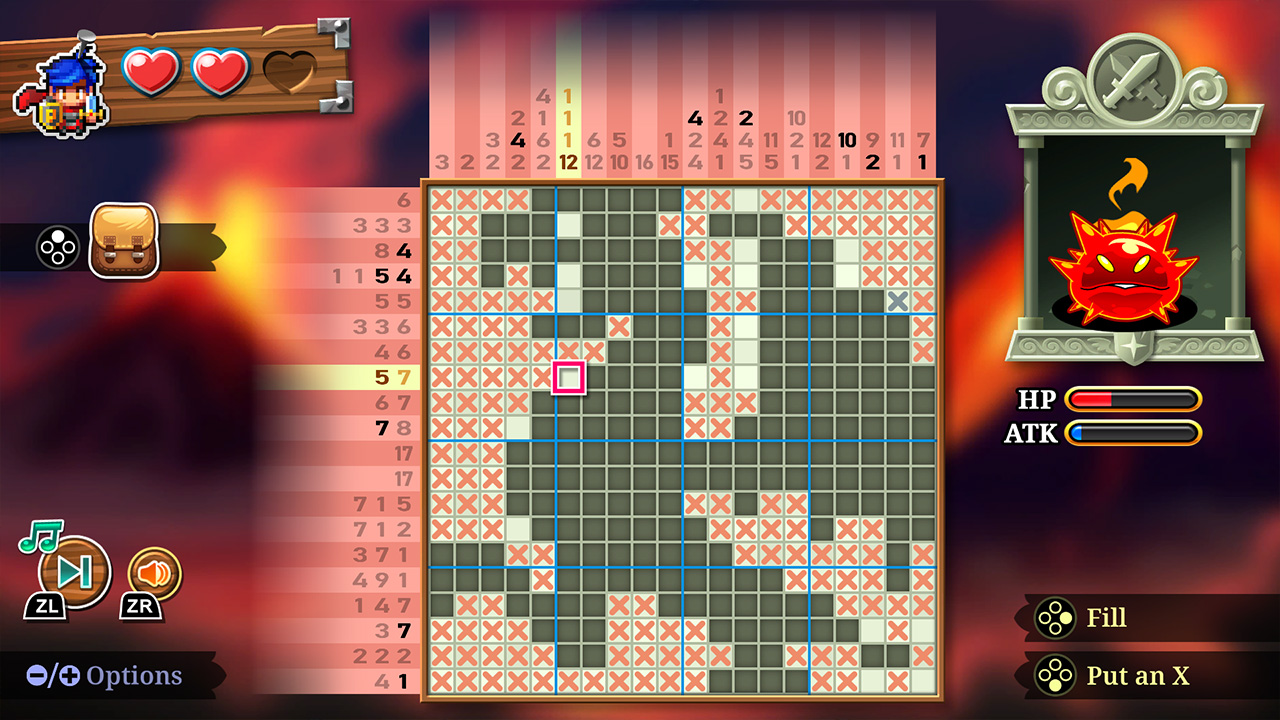 To help you on your quest though, you can purchase a number of items from a series of shop that line the path to the end-game. These can range from small and large potions, to a series of abilities that can reveal filed squares and freeze monsters in order to delay their attacks. With each completed puzzle or chest opened, you accrue gold; their totals depending on the difficulty of each puzzle. Items are rarely out of reach and you can easily build your funds in order to buy items. However, you can also come across a series of side quests that offer you a series of puzzles that you may have come across previously, but add an extra element such as completing them within a set time, producing no mistakes or by not using any items. Should you be successful in completing these, you are rewarded with items that can be picked up for free from each of the shops.

As you progress through the game and travel across the lands, you traverse a variety of landscapes from dense woods to dark caves. Puzzles become increasingly harder too, but never frustrating, with larger grids and more logic needed to solve them. Your foes also become more difficult, with boss fights and some puzzles containing a number of foes that need to be picked off one at a time; sometimes containing the need to revolve through each one to finish off the most dangerous within a set. The role-playing elements might be a light inclusion to the main core of the puzzling, but it’s a welcome addition that adds a new layer to the genre and is one that keeps you playing through to its conclusion.

Overall, PictoQuest: The Cursed Grids offers a nice variation on its themes of role-playing and puzzling. It marries the two genres perfectly to produce a game that is both satisfying to play and addictive in its premise. The game contains a very satisfying number of challenges and a finely-balanced difficulty that will suit newcomers to the genre, as well as seasoned puzzlers. Everything runs perfectly on the Switch and contains a colourful presentation; especially in its overlay of colour and animations to each of the solved puzzles. Where some puzzlers can fall a bit flat with their main presentation of just solving a series of pictures, this game takes its genre to a higher level with its role-playing element, producing a game that you simply can’t put down and draws you in to its enjoyable journey across the land of Pictoria. If you’re a fan of puzzlers or role-players, or even both, then this is a game that will sit nicely within the library of your Nintendo Switch.

PictoQuest: The Cursed Grids offers a nice variation on its themes of role-playing and puzzling. It marries the two genres perfectly to produce a game that is both satisfying to play and addictive in its premise.