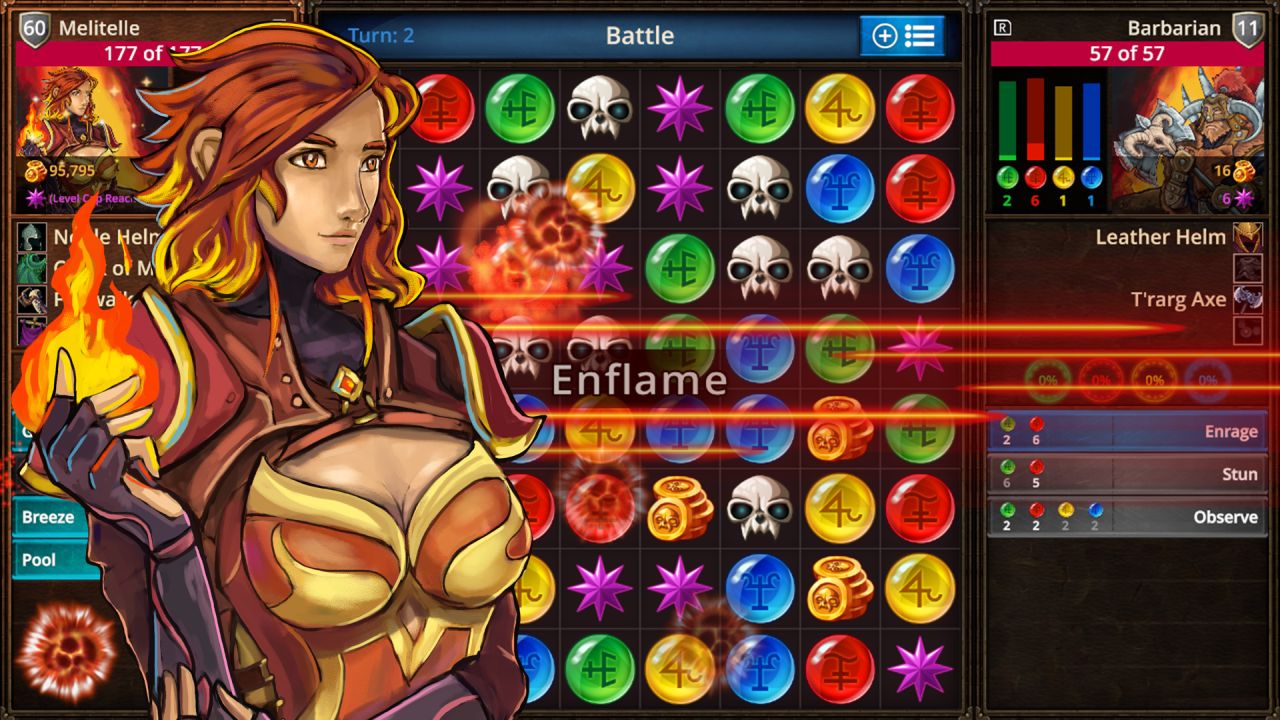 If you’re a fan of puzzle and role-playing games, then I’d guess that at some point you’d have undoubtedly come across the Puzzle Quest series of games. From Challenge of The Warlord to Galactix, it’s a series that has spawned many iterations on a host of platforms from the PSP and DS to the home consoles of the PS3 and Xbox 360, as well as a number of mobile devices. In fact, it’s a game that has been going for twelve years now and is still a title that’s going strong to this day, as D3 Go! and Infinite Interactive brings its puzzles and role-playing adventure to match a release upon the Nintendo Switch.

If you’re unfamiliar with the series, it’s style brings an amalgamation of two genres within one, very satisfying game: Firstly, the match-three mechanics of a number of puzzle games and, secondly, a role-playing adventure across lands, against a variety of beasts and a system of upgrades and weapon acquisitions. It’s a marriage that’s simply made in heaven and despite its age, still retains the same level of fun and immersion that it held when it was first released to an unexpecting audience. As with all good role-players, you begin your quest by selecting a character, class and name for your hero, or heroine. From here, you are given an oversight into the land that makes up your map, where you travel to a number of locations, fetch quests and battle enemies through its match-three puzzles that hold a number of varying elements.

With this new, ‘Legend Returns’ version of the game though, you’re not simply getting a simple port of a twelve-year old game. This version of the game has been given a complete graphical overhaul of high-definition lushness, the expansion pack ‘Revenge of the Plague Lord’ and over one-hundred new quests, spells, character classes and items that have been created exclusively for this version of the game. Along with the original story-line of ‘Challenge of the Warlords’, this new iteration now boasts over two-hundred and forty quests, five character classes and a new expansion in the form of ‘Attack of the Golem Lord’. Phew! 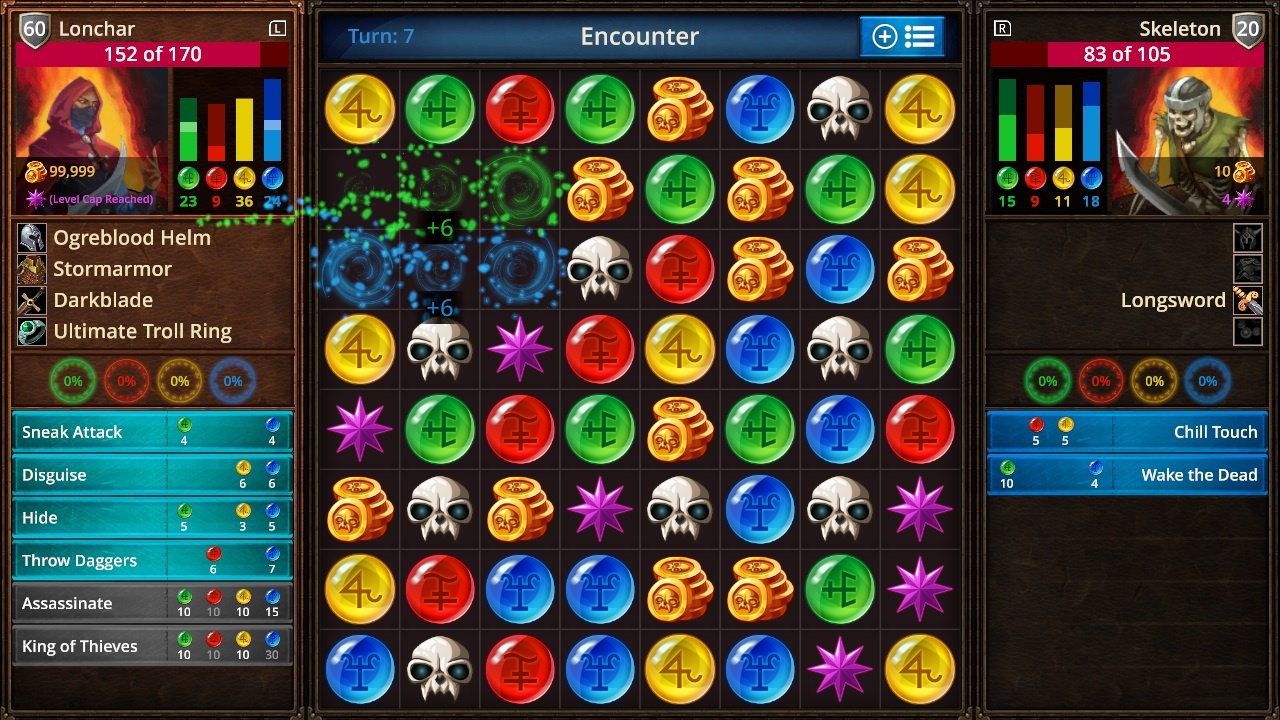 There are a number of main story arcs that branch off within  a series of sub-quests. By travelling to various locations on the overhead map, from cities, towns and villages to crypts, sewers and temples, you can select from a number of quests to undertake. From here, you embark to a specific location to undertake and complete whatever quests you have chosen to undertake. Should you find yourself lost though, then the game has a handy function whereby you select a mission from your list with the Y button and the map automatically highlights your next location and can even fast-travel you there. However, for the most part, everything is usually well highlighted and easy to follow; especially if you take on board everything that the introductory level shows you.

Although there are stories and quests to undertake, this isn’t a game that revolves around its narrative or even needs a compelling story to push it along, as primarily, this is more a match-three puzzle game than a role-player. It’s here where the combat element of the game comes into play and produces the main focus of the game. Similar to other games within the genre of puzzles, Puzzle Quest follows a similar template to other popular franchises such as Bejeweled and Candy Crush; its differences coming with the inclusion of role-playing elements into its formula.

The main combat screen displays a grid of coloured crystals, or tokens, as well as a number of skull motifs. By matching three elements of each colour, you fill up various gauges that correspond with the colour, which acts as a form of mana. Once these have a required number of points, you can perform magical spells or abilities by selecting a specific spell from a list with the L shoulder button. These spells can have a variety of effects and can often be the difference between life and death. This can be partnered by the matching of three skulls too, which deal out damage to your opponent. Either side of the grid is displayed your hero, or heroine, and your foe. Their spells are listed and the colour requirements to activate them. Above a graphical depiction of yourself or your foe, lies a health bar. The objective of each game, or battle, is to whittle down this health bar to zero before your opponent does the same to you. Its a tried-and-tested formula and one that works surprisingly well. 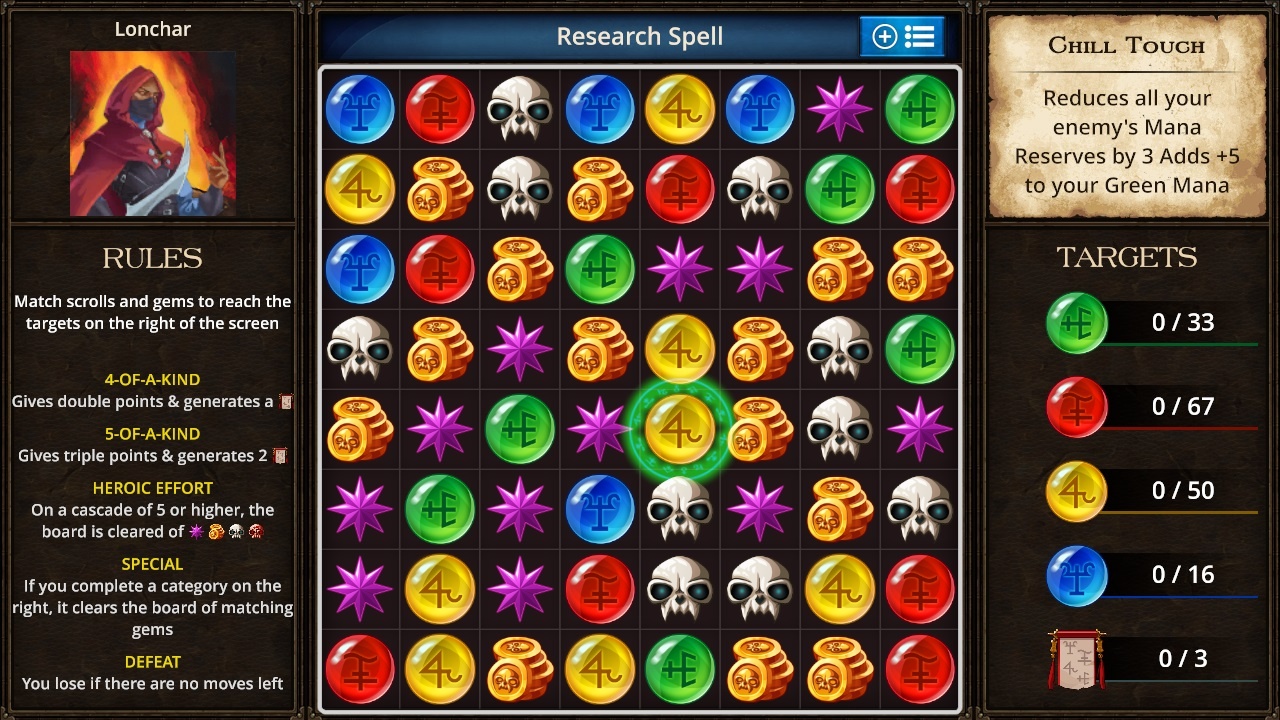 There are also some varieties that work on a similar premise, but this time involves clearing the grid of all tokens within a set number of moves. These aren’t as fun or exciting to play as the normal battles and require a bit more thought. However, should you succeed, then you capture your foe, instead of destroying them. These captured creatures then become your mount which can be ridden around the map, increase your skills sets and provide further abilities to use in combat. In fact, there are a variety of ways in which you can increase your abilities, from levelling up your character and choosing which areas to buff, to developing your home city with a number of outbuildings.

As well as collecting tokens for mana output within battles, you can also earn XP, to level up your character, as well as accrue gold by collecting coins. With this monetary value, you can choose to erect various building within your citadel. These can range from forges to create new magical items, temples that improve skill levels and stables to upgrade your mounts. There are a variety of helpful dwellings that need to be purchased in order to become stronger and more successful; especially when it comes to the siege workshops and towers that help you to capture and maintain other cities within the world.

Overall, Puzzle Quest: The Legend Returns still contains the same levels of puzzling and role-playing fun from its original release. However, with HD graphics, a whole host of extra content and a smoother refinement in how it plays, goodbye wrong move penalties, to produce the best looking, most packed and compelling version of its style to date. There’s nothing ground-breaking here, but it relies on a tried-and-tested method of gameplay that still remains as fresh as it did twelve years ago. The mixture of puzzles and role-playing go hand-in-hand and despite not containing an utterly engrossing story, its match-three mechanics provides enough fun to keep you playing over the long-term. If you’ve played its series before, then there’s enough here to warrant a return. However, if you’ve never played a Puzzle Quest game before, then what are you waiting for, as it’s time to mount your mount and match-three in a row on a magical journey of role-playing and puzzles.

Puzzle Quest: The Legend Returns offers a content-rich and more refined experience to produce the most definitive version of its series for the Nintendo Switch.