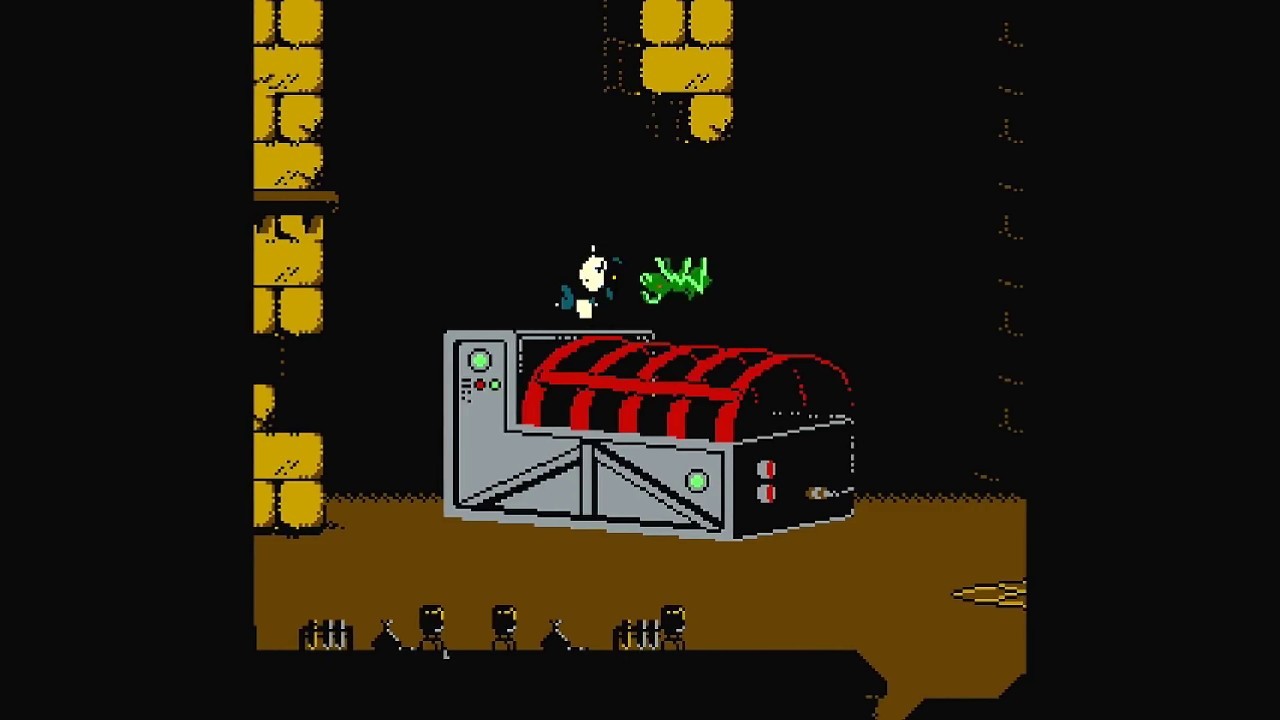 Although Halloween may be over, the folks in the U.K. are just now about to receive a delightful treat in the eShop. Due to some technical difficulties, the folks at GEOD and Retrotainment Games had a bit of an uphill battle getting their game out in time for the season. Well, just because the ghouls and ghosts have retired for the season doesn’t mean this game is totally down and out. After all, if a title is solid enough, it doesn’t matter when it releases, you can still have a grand old time. Fans of retro action and 8-bit brawling get ready, because it’s time for Haunted: Halloween ’86 – The Curse of Possum Hollow.

Haunted Halloween 86 is a strange place for a game series to start on the Switch (and several other places) because it is, technically, a sequel. There was a Haunted: Halloween ’85, and it was modestly received, and it created enough interest for Retrotainment Games to go ahead and do a Kickstarter for a second game. It was successful, and here we are. The game puts you in the shoes of double heroes Donnie and Tami, who kicked the daylights out of the infamous Haunted Harry last year. Harry was poisoning the town and making everyone into zombies, and Donnie doesn’t just let that go lying down! Now it’s a year later, and everyone is eager to see what evil tricks might be waiting for Donnie this time around. Donnie and Tami, though, would sincerely just like to relax and enjoy the holiday like everyone else. However, it only a moment before Haunted Harry returns, and now Donnie, along with Tami, need to go punch, kick and decimate the would-be zombie overlord back into the ground. We ain’t afraid of no ghosts, zombies, devil dogs or anything else!

As you may have assumed, Haunted: Halloween ’86 is a sidescrolling beat-em-up that puts you simultaneously into the shoes of both Donnie and Tami. You need to run, jump and especially punch you way through multiple chapters (seven, in fact) of demons, monsters and tricky, creepy traps on your way to find Harry. Along the way, though, you realize this isn’t the same old dance from last year (not that many players would know that anyways). Having both Donnie and Tami as playable characters creates the very cool “dual health bar” that you can use to your advantage in a big way. You see, just because Donnie takes damage doesn’t mean Tami does, and vice versa. As your character gets greener and greener (too many hits and you’re a zombie too!) you can cycle, on the fly, to swap to the other player. Both Donnie and Tami have very similar fighting styles (Donnie’s a puncher and Tami’s a kicker), so don’t worry about having to learn a brand new set of moves to make the magic happen. Just don’t die, because death means a loss for both of you! 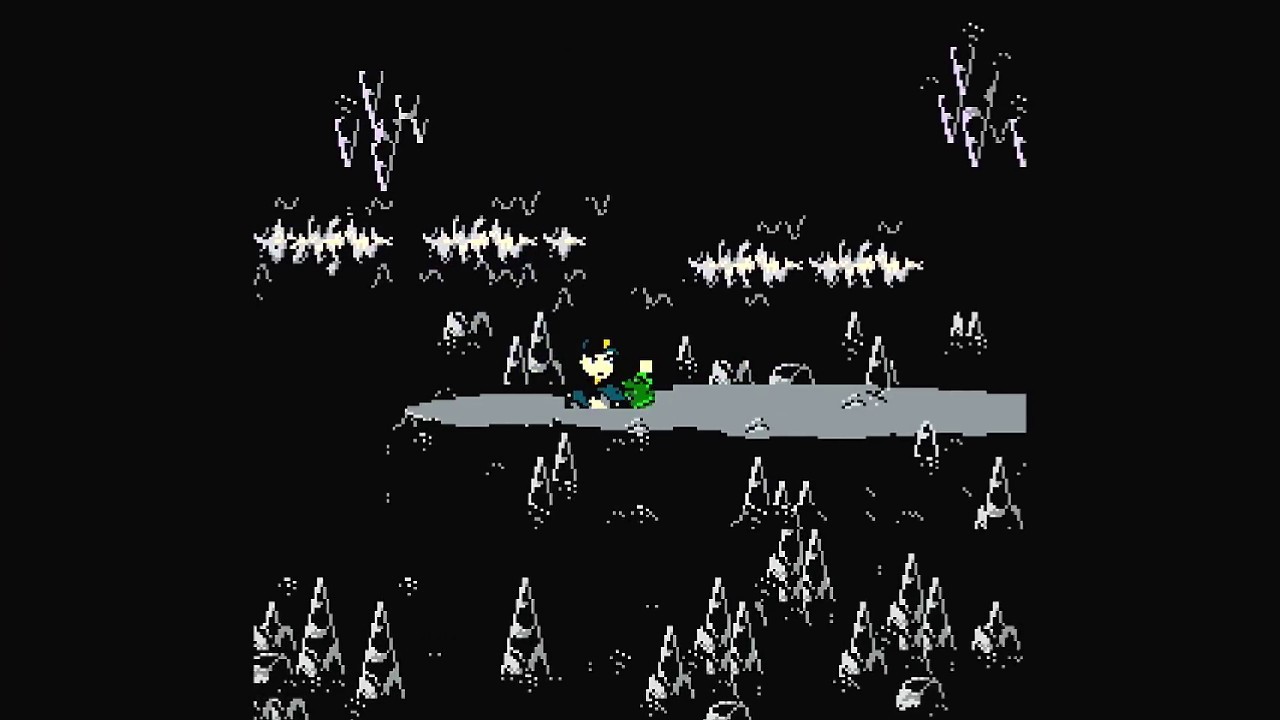 Retrotainment was very serious in their classic treatment of this title, and Haunted: Halloween ’86 is so authentic that it was literally printed on NES carts if you want to pay the premium for the full experience. First and foremost, the game is done up in some very accurate pixel work, giving players memories of River City Rampage, but in the middle of Halloween. The color palette dresses the entirety of the game in appropriate shades of oranges and browns, and mixes in plenty of blacks (shadows, bad guys), greens (toxic waste, bad guys) and greys (cavern stones, bad guys). The effect is balanced enough that it never becomes muddy, and each enemy is easily discernable. You won’t mix up a garden variety zombie for a massive shambler, who cannot die unless you kick off their head (and then can use the head for a range weapon). The grunts and the bosses are all pretty distinct too, not just in the setting and music change that symbolizes the encounter.

The combat uses some of the latest, last-minute technology that may have appeared in games like Mighty Final Fight or the NES version of TMNT Tournament Fighter. Donnie and Tami both utilize their arrows and both A & B buttons to achieve different fighting actions, like downward strikes, powerful uppercuts/crescent kicks, and even throwing off massive clouds of energy with appropriate charging moments. Plus, Haunted: Halloween ’86 incorporates moves that are commonplace for current generation games, but were experimental and absent in many NES titles, such as the double jump, or the dodge. If you choose easy mode, you start your adventure with all these beautiful, powerful abilities unlocked, and it makes the hurt you bring Harry fairly swift and sweet. However, if you want the challenge, make sure to set the difficulty to normal and gradually, chapter-by-chapter, unlock the abilities and have the agonizing choice of which one to get. Do you want the power strike, or will adding dodge keep you alive a little longer? After all, candy corn (the health item) doesn’t grow on trees, and there’s nothing worse than dying and starting over from the beginning. 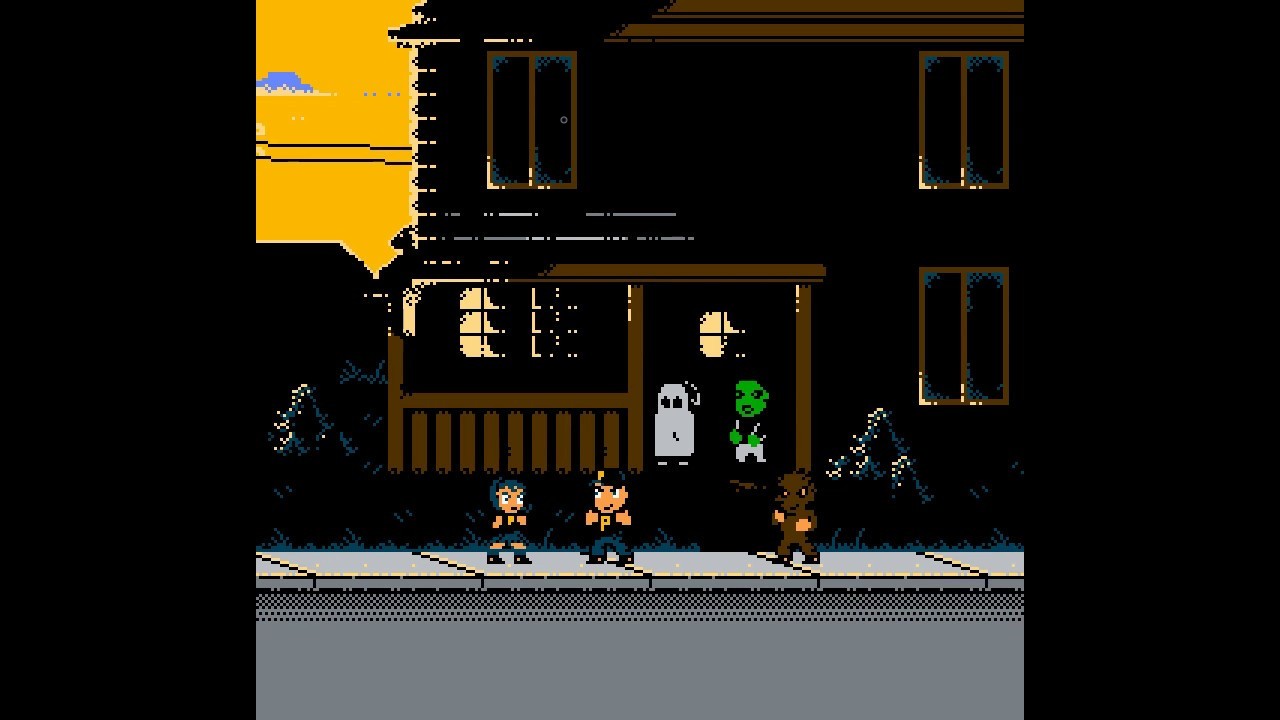 As I mentioned, Retrotainment Games is true to form, which means that there aren’t any save points or even save states available in Haunted: Halloween ’86. Instead, we’ve brought back the favorite from everyone’s past, the password system. Password systems were always interesting: it gave you goalposts to work towards in order to keep moving, but it also enticed you to cheat and just swap codes with other kids so that you could jump to the end. Goodness knows that the codes printed in Nintendo Power were the first (and only) way that I got to the end of Mega Man II. So for Haunted, it has that warm, nostalgic feeling, but players still might be a bit miffed that they can’t just save and pick up again later when their fingers are getting tired, or when you want to take a break from the accurate-but-sometimes-grating chiptune soundtrack. I think that, if I found out there were special god-mode codes or other weird codes like that, it would really boost my interest and happiness within the game with this password system in place. As it stands, though, I have no way of knowing one way or the other.

The last note I’ll touch on is the Onslaught mode, which…doesn’t make any sense to me. The fighting of Donnie and Tami through a normal, progressive game, with either fully unlocked abilities or unlockable abilities, swapping in and out with a cool health system, was awesome. Totally cohesive, loved every moment, definitely want to play it again. But then you have this additional mode in the menu that’s basically an endless brawling session, and it just doesn’t really strike me as fun. Haunted: Halloween ’86 strikes me as a game with a personality, some gumption, and intent on making a fun experience for all. By surgically removing the plot and just leaving you in the tutorial arcade to fight forever, I felt empty and bored within seconds. Maybe there’s something you can unlock there, but, for the layman who’s just trying to enjoy an old fashioned brawler, it totally took me out of the moment.

Having said all that, Haunted: Halloween ’86 is damn good fun, even if the Switch has a really sleek persona that belies the intent of the game. It still rings true as an authentic and sincere brawler, Halloween or not, and could be a perenial favorite for the right people with the patience to enjoy. A bit of a letdown for it to be single player only, but feel free to get inventive and pass the controller between you and a friend. In any case, grab this and be ready for a frightful throwdown with some 100% retro action.

Creepy, cooky, all together spooky, Haunted is a grand adventure, Halloween or otherwise.