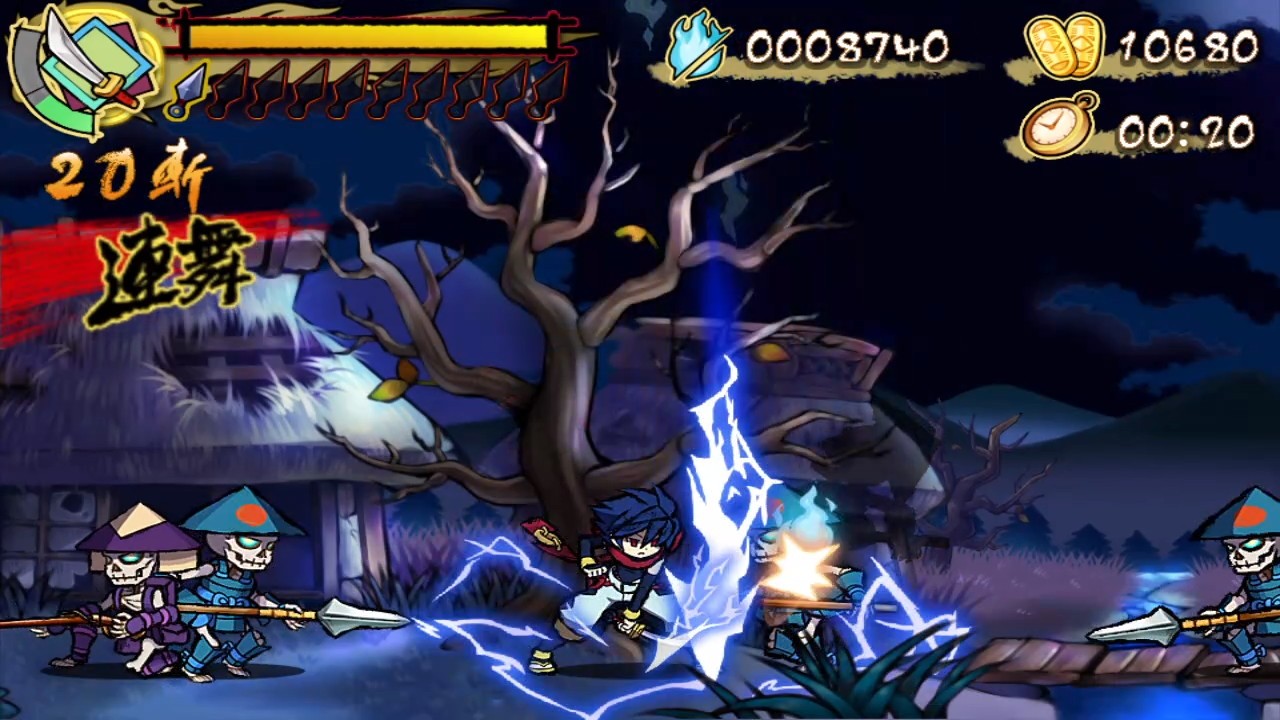 Sometimes, especially with games that have an arcade theme/feel to them, you aren’t looking for a ton of content that needs to go further than skin deep. There’s story and lore regarding classic titles like Final Fight and Bad Dudes, but, at the end of the day, it’s the performance, not the concept, that sells the ticket. I’ll be honest, I’m not 300+ hours into The Binding of Isaac because I love the story: it’s because I’m purely engaged in the properly balanced mechanics. So, for FK Digital via Arc Systems Works, the delivery of Mononoke Slashdown relies far less on things like the story (though there is one) and more on the actual game. Though whether there’s enough game to properly drive people to the booths is really up in the air, even at the very enticing price point.

Mononoke Slashdown is a 2D wave beat-em-up that puts you in a race for survival with very limited conditions. You play Kagemaru, a wandering samurai who returns to his humble village to realize all the citizens are gone and a strange evil has started rolling in. You have to face all variety of evil skeleton warriors that have risen up under the control of some unknown force, and you have your sword, your kunai (a sort of throwing dagger) and your excellent ninja training to help propel you through. As Kagemaru gets deeper into the game and learns more about what’s happening, he also is given the chance to power himself up, both with skills, weapons, armor and special “treasures” that can change the flow and the direction of the game. However, not all treasures are going to help you out in the same way. For example, the first treasure you get allows for more coin drops from enemies (essential in purchasing gear) in exchange for lower damage (meaning more time needed to kick ass). Still, since you’re allowed to go back and grind in older levels, this can work to your advantage. 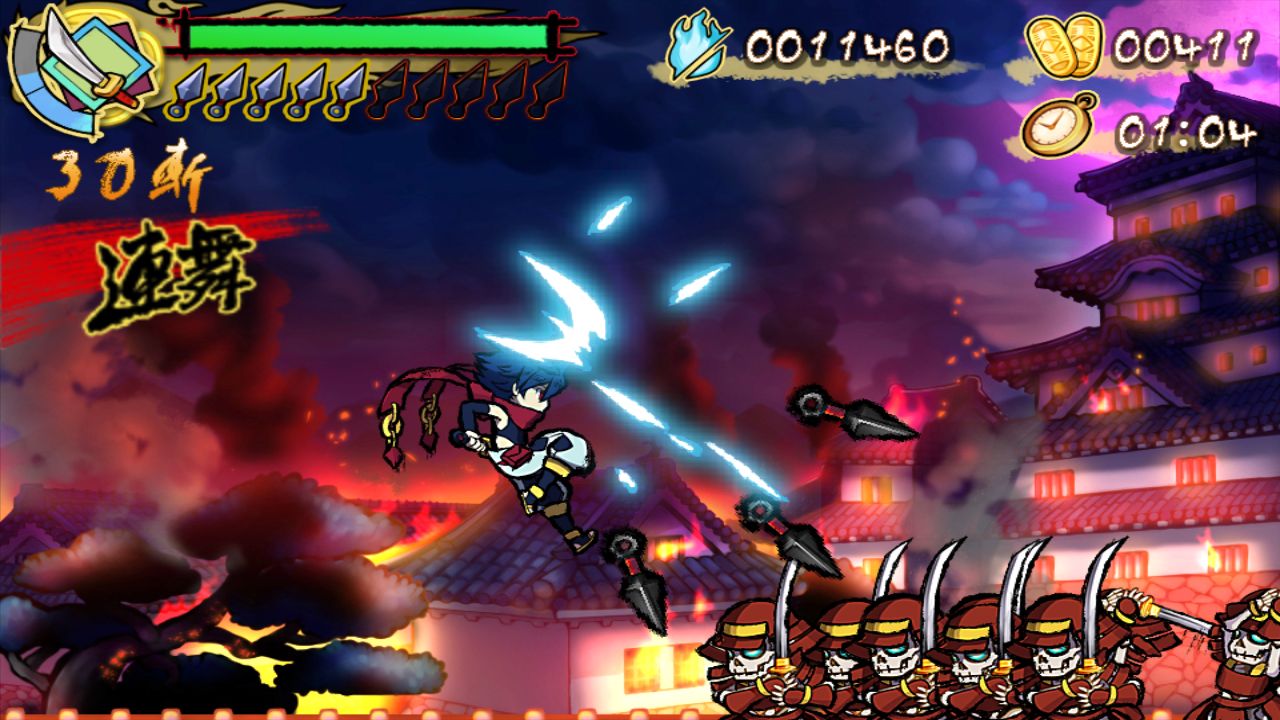 Visually, Mononoke Slashdown delivers in a solid, pleasing way. With plenty of character variety in both colors and design, Kagemaru is never in question as to what kind of villains he is facing nor what he should do. The regular foot soldier skeletons look vastly different than those equipped with polearms, or the ones wielding old fashioned rifles, or even those on skeletal horseback (which is a very cool thing to witness). The bosses, to their credit, stand out completely, being different forms of demons that are separate entirely from the grunts that you have to deal with. From the abandoned villages to the haunted forests and beyond, each of the chapters looks quite different, though the levels within the chapters are basically identical in presentation, just different in enemies. The soundscape for the game is also operational and functional, but nothing that really stood out for me. It honestly felt like an almost stereotypical version of what you’d expect from a game like this: light strings, some wooden flute music, drums and driving moments, but basically the same Kurosawa inspired sthick that we’ve seen time after time. It’s not bad, but it’s also not impressive.

As for the gameplay itself, there’s good and bad within Mononoke Slashdown. On the good side, the game is structured in a way that allows for a fair amount of customization and replay. The coins that you get from enemies and “quests” can usually buy a variety of things at once, but only one at a time, forcing you to decide if you want to upgrade your sword, fine tune your ranged attacks, add a fourth combo hit to your rampage or simply get better armor to prevent death. Between skills, weapons, armor and different kunai, you really can adjust and adapt the game to the play style that you like best. Also, everything is able to be toggled, so there isn’t always a constant upward motion. Sometimes you can downgrade, to your advantage, in order to achieve the quest of the level. For example, if you really want to destroy a minimum of six enemies in the air, unequipping the skill that makes you slam down into the ground is critical so you don’t accidentally break your own combo.

The main battle mechanics, which are really everything about Mononoke Slashdown, are seriously give and take, and that might be the tipping blow about this game in someone’s decision to purchase or not. The sword style is simple – mash the Y button – and starts out with three rapid strikes, eventually getting to more. The kunai system, in which you can only throw so many before you recharge through time and pickups, means that ranged only lifestyles are totally out of the question, at least if you want to beat the game in any timely fashion. The waves of enemies are generally balanced and keep to a fair amount of density without overwhelming, and the use of ninjutsu arts (superpowered attacks and moves that use a meter to accomplish) are interesting, though the very first “clear the room with ninja lightning” might always be my favorite. In fact, when the game sings, it sings loud and clear: awesome, massive combos, complete with aerial and ground strikes, letting you jump and almost teleport from one moment to the next, striking fear and death into the skulls of the already deceased. Sounds awesome, doesn’t it? 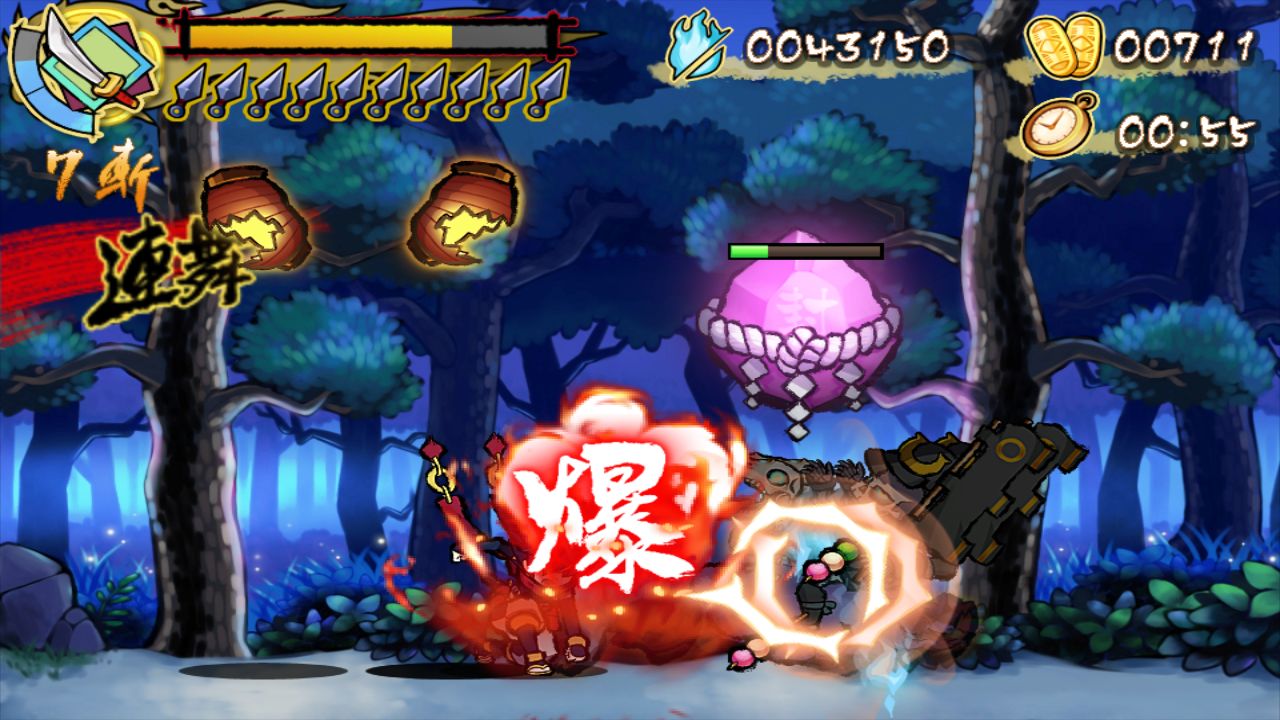 However, Mononoke Slashdown is INCREDIBLY touchy. When you double tap one direction, you automatically dash, which puts you a set distance away from where you started. While this doesn’t seem like a problem, you can easily accidentally dash just from trying to move and live. Meaning you’ll suddenly be on the other side of the enemy you were about to hit and now are standing facing someone else (who may have been in mid-attack) and have your back to the enemy you wanted to hit (who will not wait patiently for you to adjust). The dashing is super important, too: without mastering the concept of dashing, you won’t survive the first boss in any capacity. Again, the “teleport” sort of dash means dodging attacks, so how great is it when you dodge someone’s blast (intentionally) and then teleport directly in front of another shot (unintentionally?). It doesn’t sound like much, but it’s a running theme for this very short (but fun) game, and it can hamstring your progress immediately. It was enough that, once I finished on normal, my incentive to go back and do Hard Mode was lacking. Hell, after a certain point, I stopped trying to accomplish the quests for levels that involved not taking damage: it wasn’t worth the stress if I messed up.

Overall, Mononoke Slashdown is very fair in price and delivers a good amount of content, plus has some replay and variety to it. The English translation for the story exposition between levels is incredibly rough, but it doesn’t affect the gameplay (though it does make me wish someone had let me proofread before it got published). Perhaps if someone plays with a Pro Controller or something like that, the touchiness is significantly less present, and people can enjoy the game longer and to a greater capacity than I could.

Intriguing in concept, solid in design, but frustrating in a certain mechanic, you can enjoy the ninja’s journey, but may still stumble towards the end.