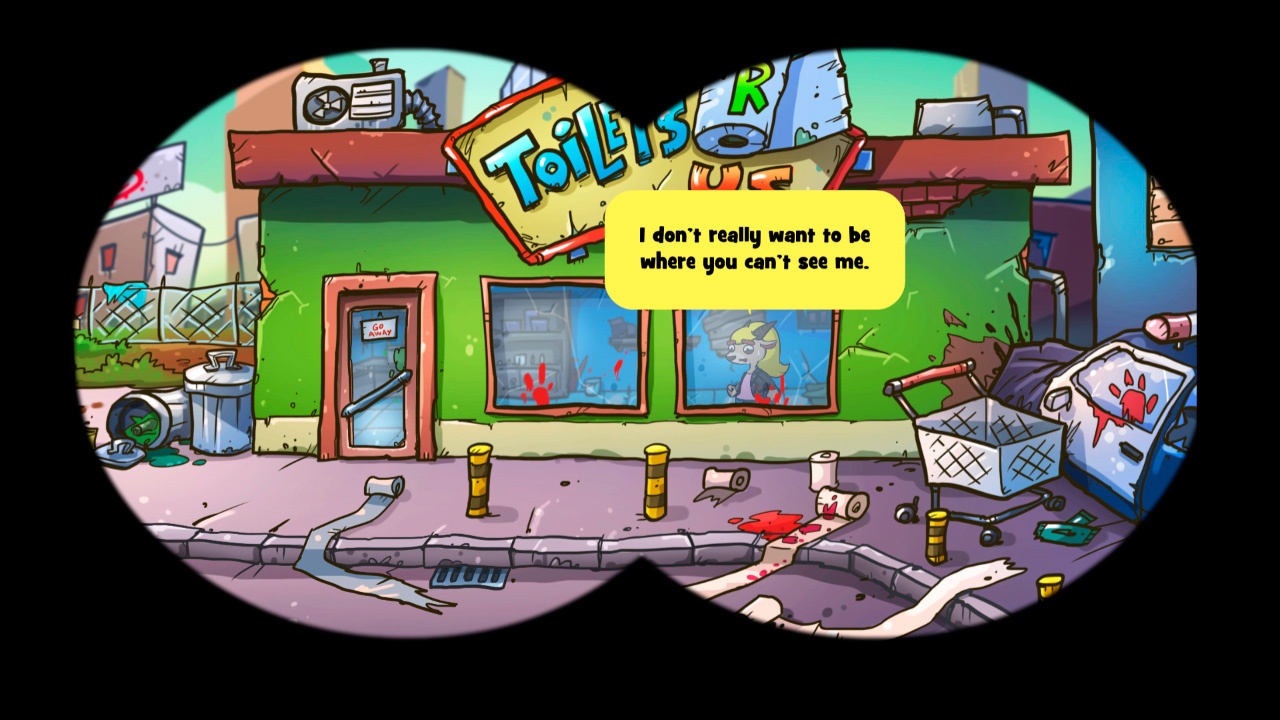 I remember when zombies were cool. When your only real reference to the undead was your in-laws, the dinner ladies at school or a copy of George A. Romero’s Dawn of the Dead on VHS(!) or via download. Now it’s an overpopulated market with The Walking Dead, the Dead Rising series and Resident Evil movies. So when I first saw the ‘catchy’ title Scheming Through the Zombie Apocalypse: The Beginning, I made the incorrect assumption that this was going to be a dreadful mobile-type game with silly power-ups.

Scheming Through the Zombie Apocalypse: The Beginning isn’t that at all. First of all, it’s kind of a point and click adventure game, but not as interactive as one would think. Secondly, it’s a different take on the genre as the cast are animals with the most colourful vocabulary. When I first booted this up, I had it on handheld mode and sitting with the kids. My kids, not random ones. Within the first few minutes of f-bombs, I realised that this was either one for headphones, or playing at a more suitable time. I did both. I sat in bed late with my headphones, having a chuckle at the banter.

What struck me first with Scheming Through the Zombie Apocalypse: The Beginning was the visuals. It’s a very colourful game – the characters and backdrops are great. The animation is on the minimalist side, striking a resemblance to titles such as Darkest Dungeon, only with less movement. It’s rare to see this sort of artistic flair with Nintendo eShop games, as most of them opt for the pixel art approach. While there’s nothing wrong with that aesthetic, it’s always nice to have a bit of variety instead of every game looking the same. I’d go as far as to say that the artwork is quite comparable to the other adventure I reviewed on the Switch entitled The Wardrobe: Even Better Edition.

Scheming Through The Zombie Apocalypse: The Beginning is very much a story-driven title. I’m very much a fan of that and don’t mind taking a backseat, but the lack of interaction may put you off. There’s a lot of dialogue and not so much action. With regards to the story, we jump in pretty quick. The apocalypse has begun, and animals are eating one another and the streets are overrun with chaos. Our anti-heroes, Larry the dog and Hank the rabbit, decide to sit it out, literally, and stay in their apartment for four months. Hank states he has enough food, water and recreational drugs for the next 12 months, but clearly got it wrong. Oh, and the power is out too. When supplies are at their lowest, they realise that they have to venture out into the wild and start scavenging for goods to stay alive. 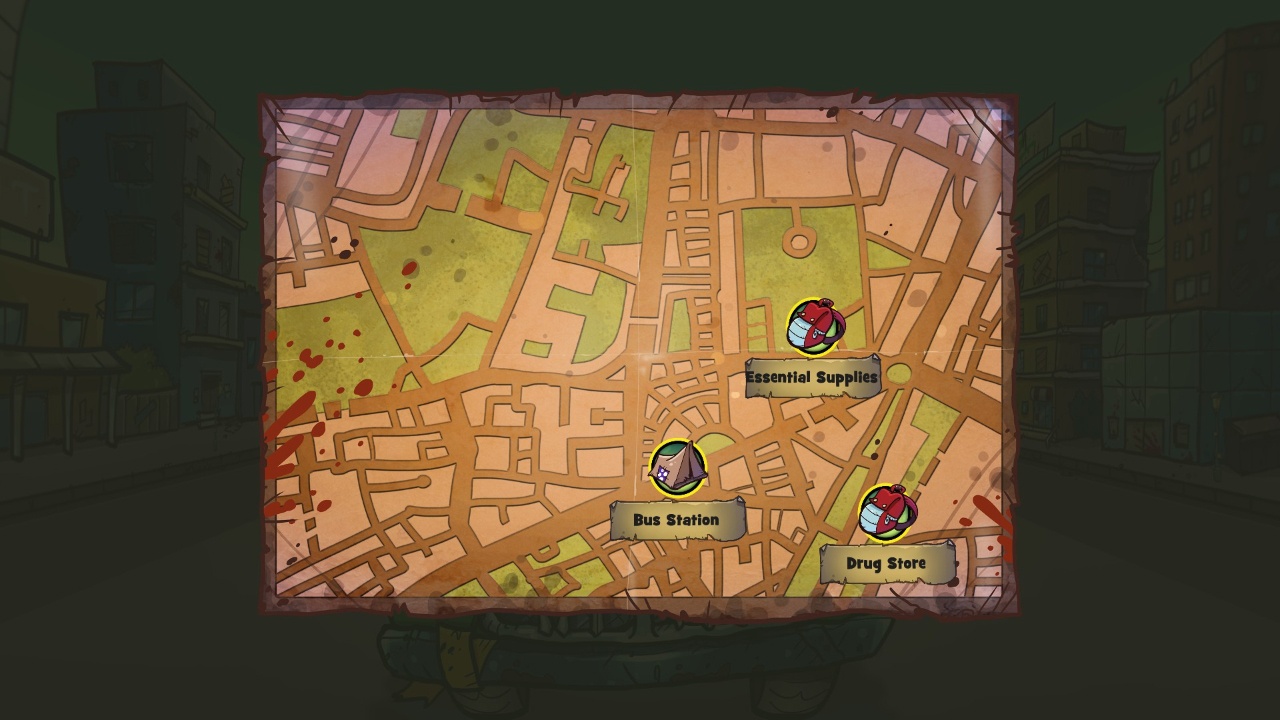 It’s not just the graphics that are colourful. As I mentioned earlier, there are a few choice words that the two main characters frequently use, and while I’m not offended by such words, it was a bit overkill. Both Larry and Hank says these things with conviction, and I was impressed with the voice talent, but it would have been nice to have a few more actors involved. I could hear the same voices but tweaked oh so slightly. In reality, it just sounded like a cast of two do all the voiceovers, so it would have been good to have had a bit more variety. The goal is to get into the Scavenger’s Guild, using the power of persuasion, so it’s important that the dialogue works well; at least in this game, the first in the series. A clue is in the title ‘…The Beginning’.

Putting the banter to one side for a moment, to get to the guild, you need to have acquired sufficient loot to make you desirable enough to join. At the beginning of the game, Hank directs Larry into an off-licence to loot any remaining items but gets duped by a drunk parrot and two bulls. Hank, being the brains behind all this, will use his persuasion skills to ensure that both he and Larry come out on top. Ignoring the first scene with Larry doing the dirty work, the pair hit the road and lure suggestable animals into locating the loot. From their vantage point, Larry joins Hank in their van and tells the victim what to do. Through the actions and dialogue you choose, this will determine the success of the ‘raid’ and what goodies you get at the end.

When choosing your loot, you manually select the items you wish to add to your inventory. You can’t choose everything in one go and must do it individually, which seems a bit of a waste as most people would take the lot in one swoop. Once you have your inventory, you’ll then be in a situation where you have to divide it up into a fair share. Hank, a former salesman, negotiates each portion, and you need to transfer the goods from your stash into the other party’s inventory. It’s a bit plain and not that fun as you’re merely moving items to meet the value that the other party expects. This means that you can mix up with a few low-value items and higher cost, i.e. a bottle of alcohol, cigarettes and some chocolate bars. It all depends on what you’re able to negotiate.

Now, this is very much a minor criticism, but when selecting dialogue or choosing which items to add to your inventory, the highlighted option desaturates. With user interfaces, most people are used to their selection being the more prominent option – such as when you hover your mouse on a call to action section on a website. It effectively highlights the point of interest. In Scheming Through The Zombie Apocalypse: The Beginning, the dialogue you select before pressing accept will fade out. On several occasions, I picked the highlighted dialogue bubble as though that’s what I had chosen. It was a bit annoying as I would sometimes select the opposite answer I wanted, all because the UI strays from the traditional method of highlighting your decision. I think I’ve overcomplicated that explanation, but hopefully, you’ll get it. A touchscreen option would remedy this, but alas, there are no touchscreen options on this Switch edition. A bit of a missed opportunity, I think, as it would be much more intuitive for making your dialogue choices. 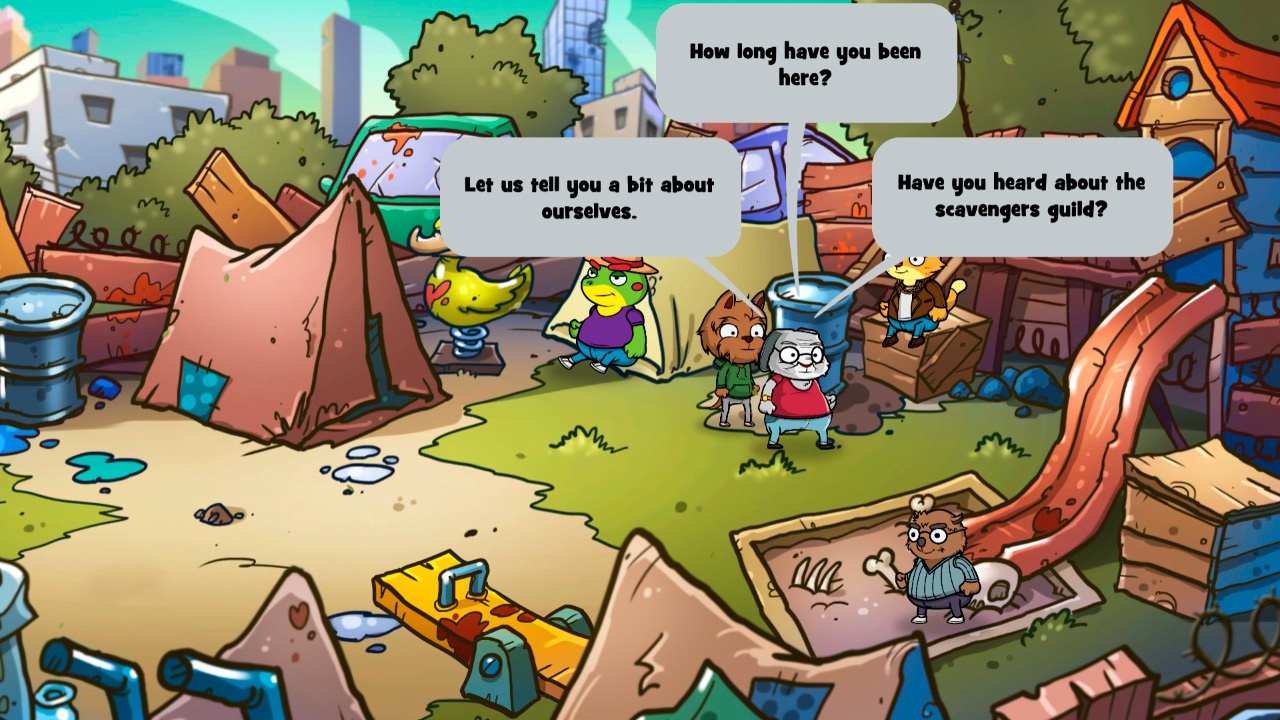 I often play my games with subtitles. Anyone with kids will know it’s easy to miss essential story events. In the settings menu, I had it switched to subtitles even though I was playing with headphones as by default, speech bubbles appear when a character is talking, albeit, without any text. It’s a strange feature to have and can only assume that it is to indicate which character is speaking as their mouths aren’t animated. Also, because the voice talent mostly sounds the same, I suppose it makes sense to differentiate between the speakers visually. It was still bizarre to see empty speech bubbles though.

Scheming Through The Zombie Apocalypse: The Beginning is an interesting game as it’s not typical of the usual point and click or even survival varieties out there. The voice for Larry reminded me a little of Max from Sam & Max Hit The Road, only the difference being that Larry and Hank didn’t have the same appeal as the title above. The duo are essentially anti-heroes and quite unlikeable. With that in mind, their indifference to their fellow animals is quite fun at times – the dialogue, with the exceptions of the overused swearing, is the driving force here and that’s paramount in a story-driven game.

It could potentially be a good series of games should the sequel not take forever to be released, and the two leads remain. I would like to see the introduction of a few more voices and also a touchscreen option for the Switch. The next title could do with a bit more interactivity as with Scheming Through The Zombie Apocalypse: The Beginning is like watching a late-night cartoon more than a game, as your only input is dialogue choices, switching between inventory and mini-games. Presentation-wise, it’s great but, in my opinion, a little lacking in the gameplay department.

Scheming Through The Zombie Apocalypse: The Beginning Review

While the two leads should be unlikeable, the dialogue is worth the experience alone if you’re not put off by South Park/Family Guy humour. Be advised that this is story-driven, so lots of periods of inactivity for the player.

Great hand-drawn characters and background
Fully voice acted with lots of banter
A study of sorts into manipulation and getting others to do your dirty work!

Not so much opportunity to interact as listening to the dialogue mostly
The user interface isn’t intuitive, and the inventory screens are unimaginative
While the voiceovers are very good, most of the voices sound the same as the leads