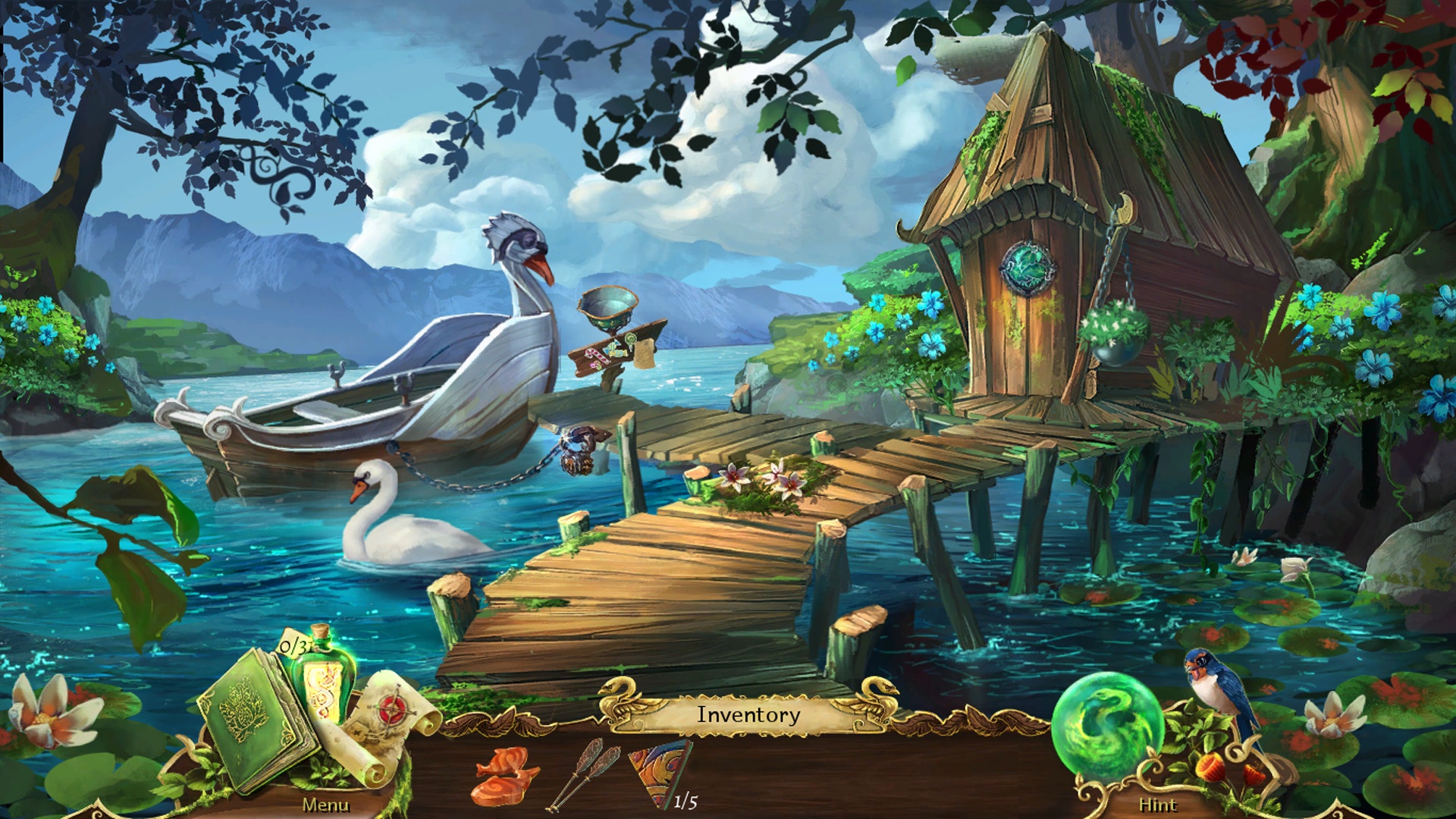 Grim Legends 2: Song of the Dark Swan, developed by Artifex Mundi, is the second instalment of the trilogy. A hidden item quest puzzle game that bucks the trend of fantasy setting; Artifex Mundi have utilised fairy tales, & more specifically Brothers Grimm to influence their storyline and artistic approach. The six swans Brothers Grimm fairy tale has taken many adaptations over the years & Grim Legends 2 is no exception to this trend. As the story unfolds obvious references to the tale are seen, the artistic approach is a definitive homage to fairy tales & folklore.

The game tells the story of 2 Kingdoms, the Eagle & Swan. You play the part of a female protagonist, a world famous healer who has been called upon to save the Queen of the Eagle Kingdom. The Queen is mute and has mysteriously fallen ill. As the opening scenes unfold, the royal couple’s only child is taken by a stranger enveloped in an odd green mist. Black magic is the only viable reason for this crime. The queen is accused & without a trial she is sentenced to death; the only suitable outcome for her heinous crime. The King refuses to believe his Queen would be involved in the dark arts, he instructs you to help solve the mystery, much to the dismay of his mother. Solve the puzzles & unravel the secrets of the Queens past, can you right the wrongs? Can you prove the Queens innocence whilst in the ever present shadow of the green fog?

The gameplay for Grim Legends 2 is broken down into lots of mini puzzles, when you solve them they will reward you with an item or a clue, these in turn can be used in the world to open up further puzzles. This style of play meant you were traversing different areas of the map constantly, a shortcut to the map to select areas cut down movement time, but the fluency of the story was really broken up. It made it feel bitty and random, this for me did not follow the influences of a Brothers Grimm tale. Artifex Mundi do use a tried and tested method for their puzzles, a mix of mini games & hidden object scenes. The opening few levels you encounter are a delight of both challenging puzzles & intricate mini games. I admit that after some time working through the puzzles I was genuinely happy with being able to solve the challenges, on completion I looked forward to the next task. This sense of joy & anticipation was soon eradicated as the puzzles began getting steadily more difficult & mundane. A repeat of the same task filled me with no sense of achievement, more a fear that I’d have to spend 10 minutes of my life hoping to complete the objective. 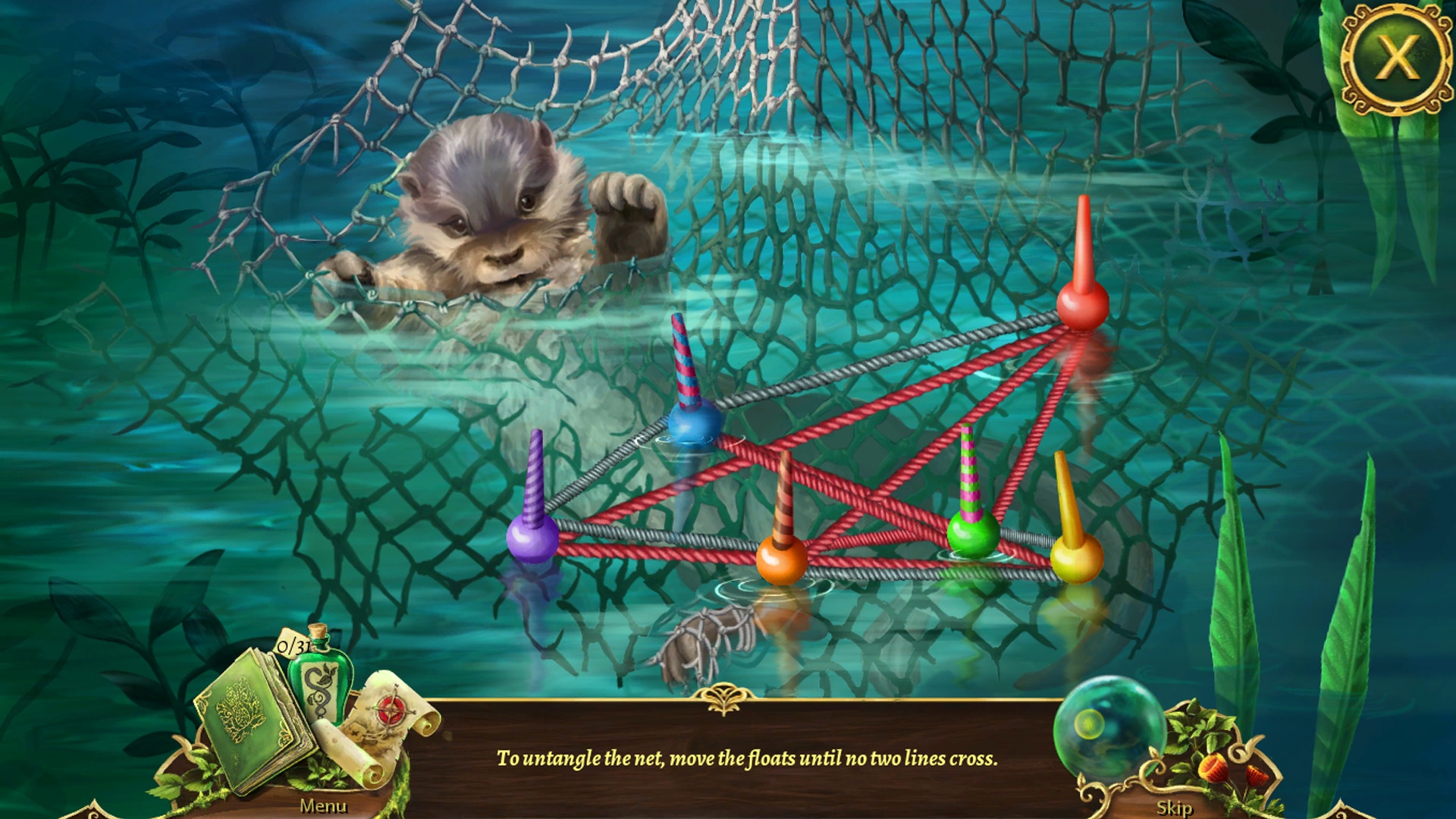 The games difficulties were compounded with further frustrations due to 3 main issues; graphics, controller function, and inability to reset puzzles. Let me spend a moment expanding on this for you. During most of the hidden object scenes the items you were searching for & the image background colour choices were so similar that the objects were unidentifiable, your only solution to finding them was to move the cursor around the screen, press the A button & hope, this wasn’t the case for all of the puzzles but enough to make the issue memorable. The controller function was infuriating, you could line the cursor over an item & select it, but for some unknown reason it would not select the item. This would then force you back to my first point of just randomly moving the cursor and jabbing the A button. The final point regarding no puzzle reset goes a little like this, you stumble across a puzzle, you jump right into solving it & realise you’ve made an error. Common sense says just restart it and try again, unfortunately for 90% of the puzzles this is not an option, your only solution to this is undo all the mistakes and manually reset the puzzle, or skip it all together. If like me you try & get achievements, then skipping a puzzle is not an option, one puzzle skipped & you will have to play through the game again to pop that specific achievement.

I have to applaud the developers for their artistic approach the game, the bright colours & bold images used really transported me to a fairy tale land, the characters design & the settings in which the tale takes place felt very nostalgic & took me back to reading books in my childhood. The game itself feels very early Xbox One generation, the few cinematic scenes & animations are poorly executed.

I absolutely adore the soundtrack that has been implemented, this complemented the theme & genre of the game perfectly, it was never overpowering & really helped build the atmosphere required for each element of the game. The one area of the audio I cannot fail to mention is the appalling voiceover work on the narrative. It was so incredibly poor & out of sync with the nature of the game that I just began shutting off & reading the dialogue. I wish I could say it was so bad that it was good, but I’d be lying, it was just bad. 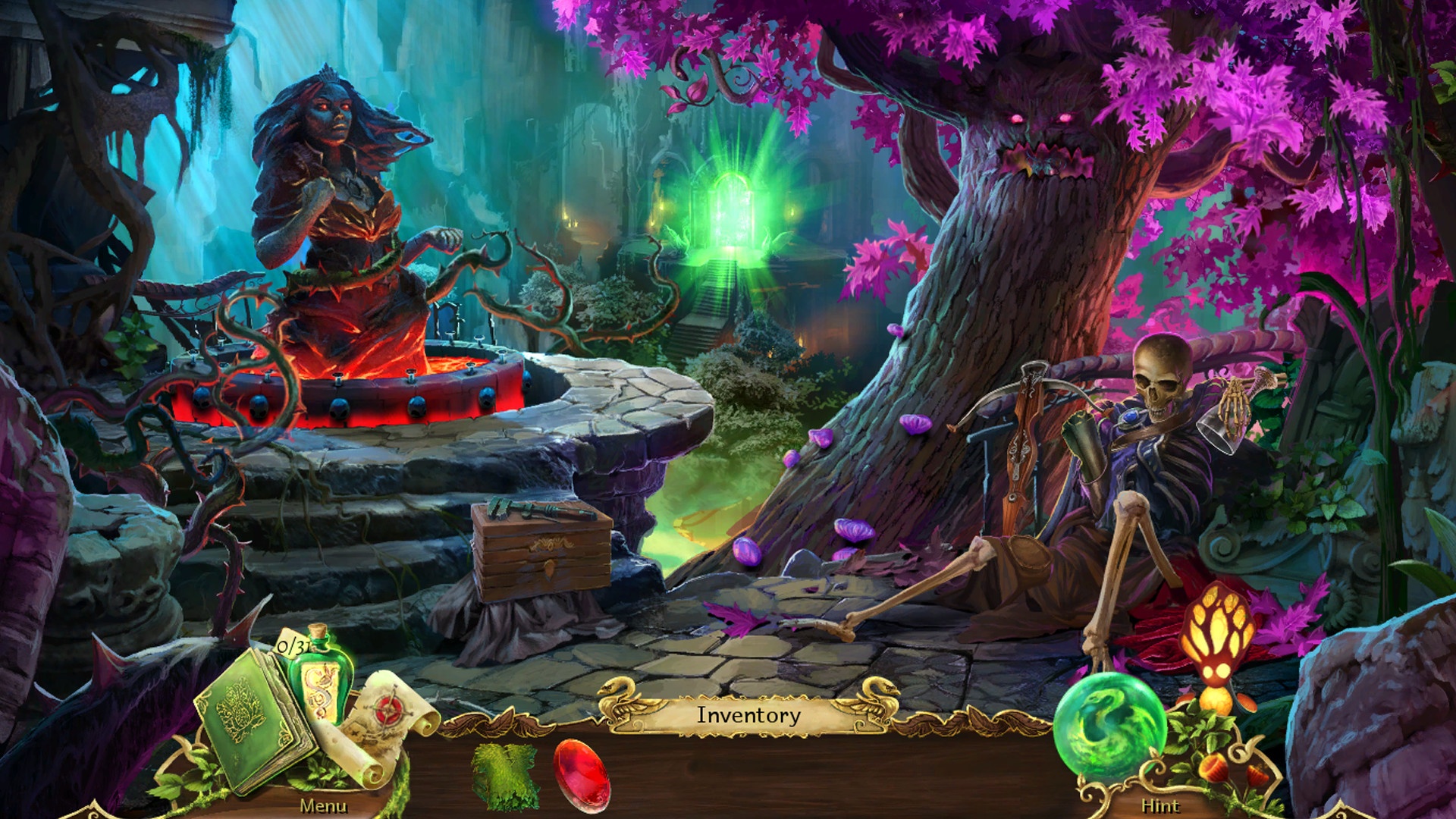 The story ends with you learning about both the Kingdom of Swan & Eagles darkest secrets. Your reward for finishing your quest? An additional chapter that is not linked to the main story. After hours of completing so many of the same puzzles I really contemplated leaving the reward, I’m really glad I didn’t. A much shorter story that follows a similar trend to the main game, but with less puzzles that are harder to complete. The theme is much more engaging & the clues are kept to a more concise area, meaning there is a lot more to work with but much less map navigation. The finale to the chapter is the crescendo of an ingenious solution to a dangerous problem, without giving the game away, it involves a sheep & a dragon.

The game as a whole was a positive experience, it was a relaxing mind exercise that allowed me to immerse myself in folklore & a fairy tale environment. I had to remind myself whilst playing that this particular genre is repetitive in its nature as there are only a finite amount of puzzles available. Though the game did have its flaws these never stopped me from wanting to finish the story or complete a puzzle.

For the hardcore fans of this genre you will probably forgive its little quirks & frustrations & will enjoy the challenges that unfold. For the casual gamer I’d say you will still enjoy the experience, just don’t get too disheartened when a puzzle goes wrong, or you have to listen to the torturous voice overs.

A Point & Click hidden object puzzle game that transports you into the settings of many a Brothers Grimm tale. Artifex Mundi have proven again that they are the leaders for this genre, with their relaxed but challenging title.

Repetitive nature of the game
Lots of traversing across the maps.
Hidden puzzles can be hard to define and control.
Voiceover work is terrible