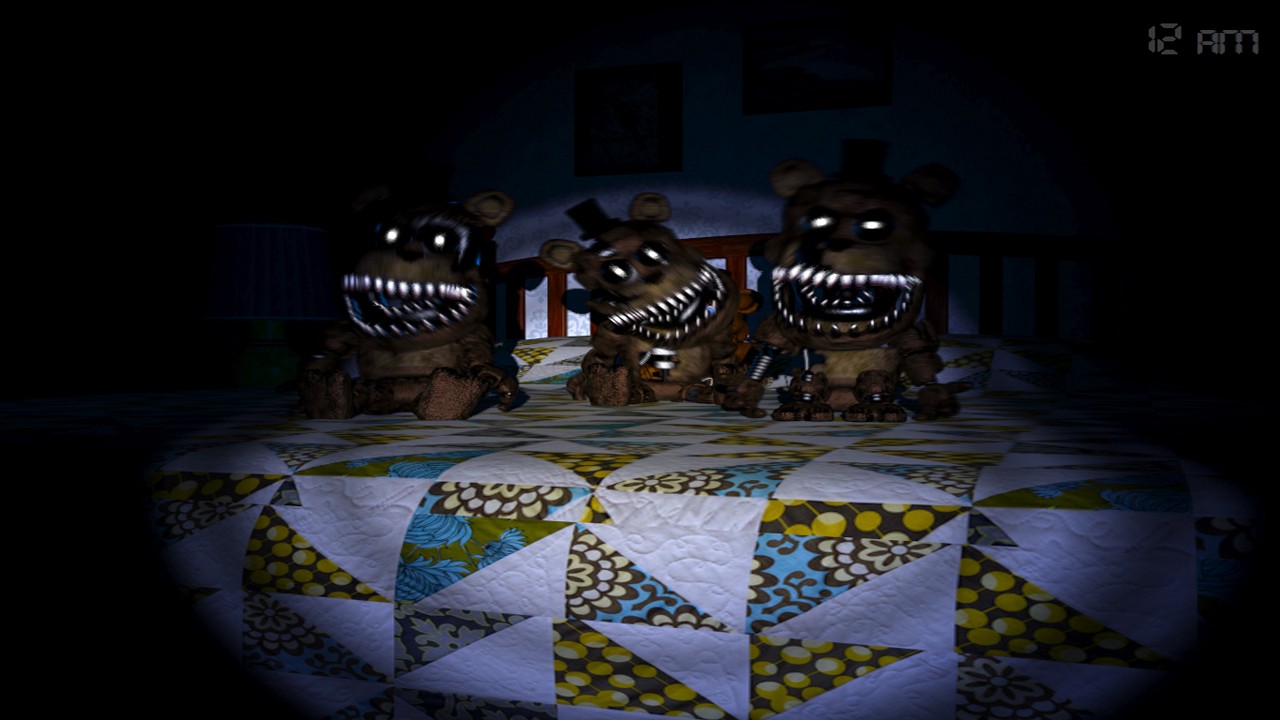 This. This was messed up.

Fun fact for people at home who care: I suffered a lot from night terrors and anxiety as a child. Probably from the ages of 9 to 12, sleep was a difficult and hard fought battle for me. I would be awake way past bed time, often getting out of bed and running laps in the living room to try and exhaust myself so I could sleep, because God knows my brain wouldn’t let me otherwise. My parents, despite their best efforts, couldn’t really understand and eventually gave up on trying to quiet my mind. In today’s day and age, I probably would have been prescribed something, but, as this was the early 90s, I got a healthy dose of  “no more TV before bed!” Which solved nothing, but whatever, that was then and every parent makes mistakes. The point is, some children, no matter what you tell them, no matter what becomes them in the daytime, can be petrified of the dark and being alone, and, thankfully, they usually have no good reason. Scott Cawthon decided that “no good reason” wasn’t an appropriate setting, and “many very, very good reasons” was the right tone for terrorising children. We finally leave the security office and head to the source of this game’s pain and suffering with the fourth instalment of Five Nights at Freddy’s.

To help give you an idea of things, you may have noticed the previous three games took place in and around the Fazbear legacy, but in different ways. The timeline officially goes 2nd, 1st, 3rd. This game, Five Nights at Freddy’s 4, is a prequel to the 2nd game, which, chronologically, makes it the very first game in the series. Confusing, but it gets worse. This game has nothing to do with the security guard. This time, it’s a scared, bullied and neglected child who is living their worst life with awful interactions by day and legitimate monsters in the dark. Everything about your life that you glean from these moments lead up to your death (spoiler, I guess?) and propelling the game forward with the vengeful spirit of children that make up the animatronic monstrosities of the other games. As you’ll see, the mascots of Fazbear’s make their first appearance here, as both stuffed animals and very real demons that are hellbent on destroying a young child (which I think was a boy) who is already being destroyed by day. 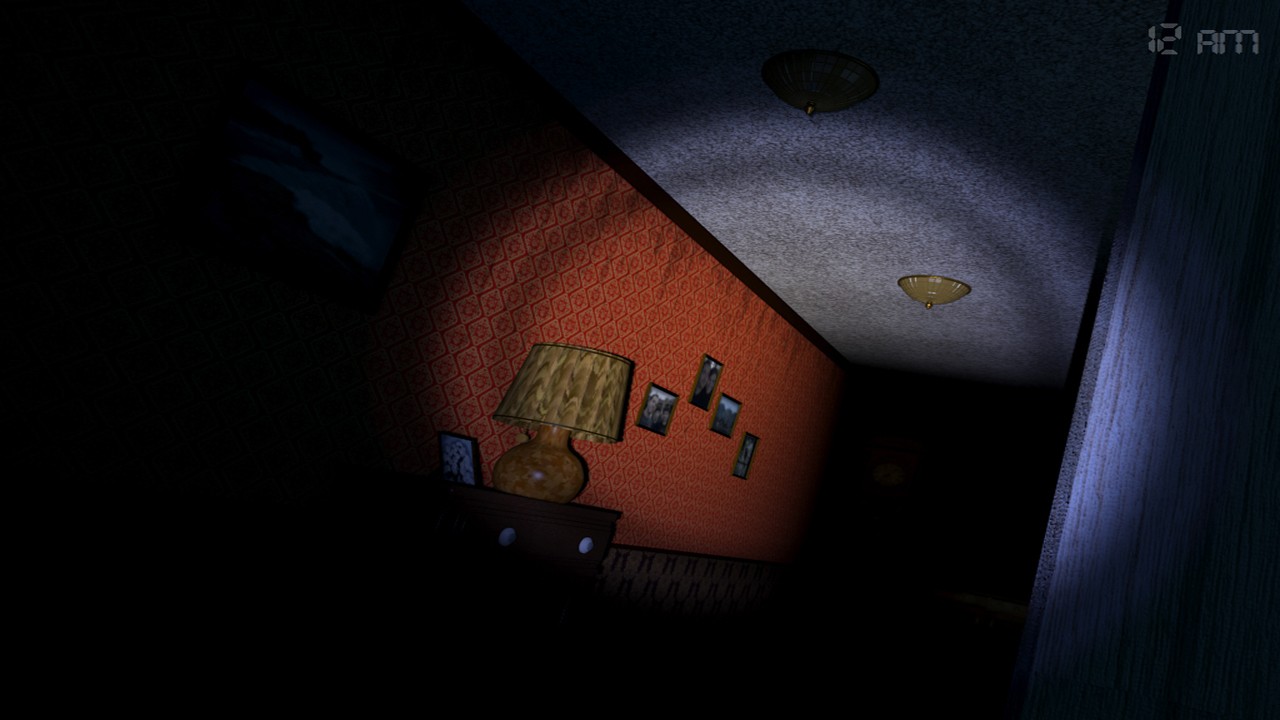 Once again, the nighttime clock ticks down in Five Nights at Freddy’s 4, and survival till 6 AM is crucial, but the approach is quite different. Now in a child’s bedroom, you have to keep an eye out for monsters in the hall, in the closet, and gathering on your bed. Your flashlight is a double edged sword, scaring off SOME monsters but actively attracting others. You can hold the door shut to keep out the beings that are right upon you, but the door only stays shut as long as you hold the button. Also, your cute Freddy Fazbear plush will attract some other miniature, evil Freddys, and you need to shoo them off your bed with the flashlight before three join. Three means a giant Freddy with zero save throws is coming, and what the hell, that’s not how things work. Oh, and you’re way more in tune with the audio this time, because the different breathing of the monsters is actually how you know when the flashlight will save you and when you gotta hold that door shut. And did I mention this is all taking place in a child’s bedroom, and you are the child?

If that wasn’t enough, we’re back with the 8-bit cutscenes/interactions, but they’re way worse and way, way more important to the storyline this time. Now you need them to show how this kid’s life is utter hell in the daytime, from being locked in his bedroom to being abandoned at a Freddy Fazbear’s Pizza and much, much worse. These are a bit more on the nose than previous Five Nights at Freddy’s cutaways, but I quite liked them. One of the biggest complaints about the 4th game is that there weren’t any voiceover parts given on the nights to explain things, but who the hell is going to talk to a child at midnight to tell them how to survive? The 8-bit moments show that this kid has a terrible life, with friends who aren’t friends, a brother who is a pain, and parents who simply don’t care. It makes a compelling argument against bullying, and I shudder to think if any child actually has to live through stuff like this.

On the plus side, I like that the game recognizes how difficult it is by implementing the Springplush Mini Game, in which you try and move a stuffed animal to a cartoonish “X” before time runs out. Doing this shaves a full two hours off the next night, and, while the mini game gets hard every time, it’s worth doing  and doing right, and creates the right incentive to make players try their best instead of just taking a breather and waiting for the next night to start. In all seriousness, if this mini game didn’t exist, I don’t think I would have been able to finish Five Nights at Freddy’s 4, because this game SUCKS in terms of difficulty and terror. 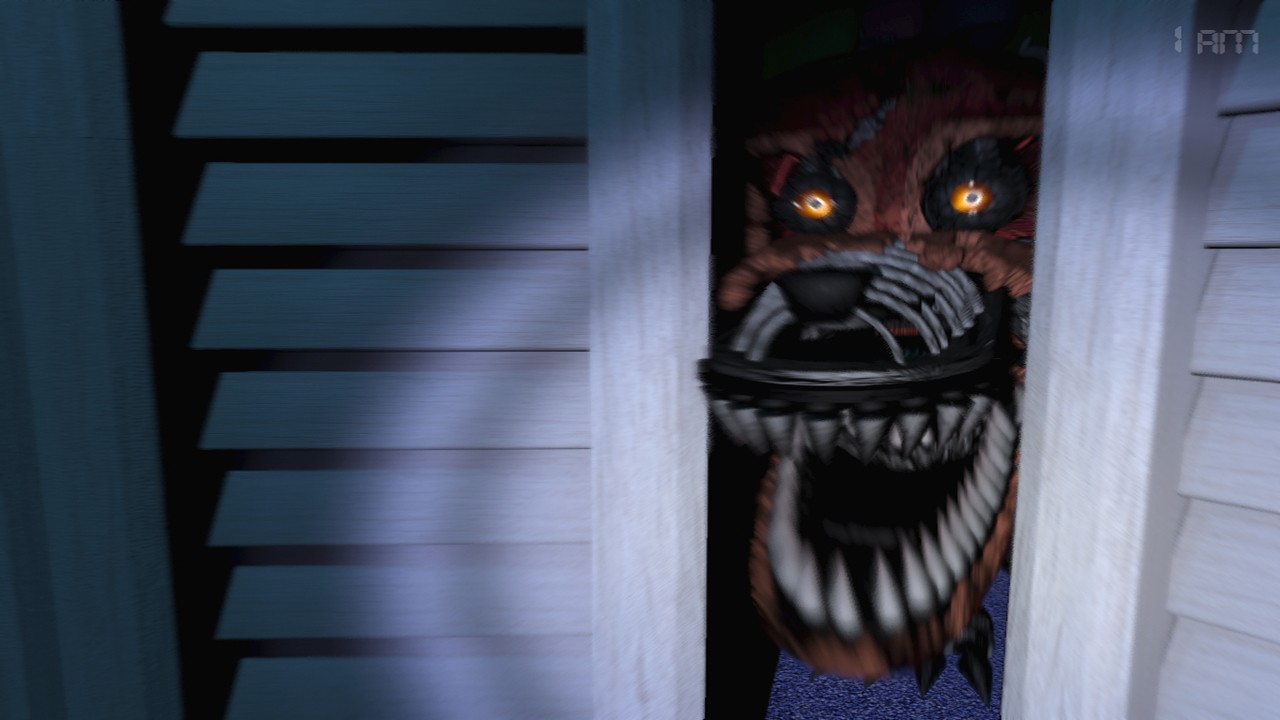 That honestly might be only my experience, but, again, personal connection made this more difficult for me. I hated needing to continually spin around to face the bed, the closet, the hall and back again. Whereas toggling between monitors and different angles in a fixed office was alright for my motion sickness, it got really hard keeping my head during Five Nights at Freddy’s 4. I got nauseous by the third night, and needed to take a serious breather before continuing. The anxiety of being attacked as a child instead of an adult upped the stakes, and hearing the cacophony of minor sounds that promised very major doom was so stressful that I will probably never return to this game. I died more than a few times, and the dark, the better animations and the darkness of my daylight life was really hard and heavy handed. In theory, if you were interested in the lore of the games moving forward, you could skip this one, as it only provides additional tragedy to something already tragic. It’s sad on top of sad, and it doesn’t make me sympathetic to any of the victims in future games, or put me on the side of the robots or anything crazy like that. It just made me uncomfortable.

The controls port well to the Switch, the graphics are a massive step up and look great, and it’s pretty cool that this is one of the newest instalments in the series and is fluid and strong on the console front. Having said all that, I personally cannot recommend Five Nights at Freddy’s 4. I recognize and acknowledge the technical advancement, the better movement towards scary actions and the macabre, and the importance of supporting the fans and their expansion and creation of the universe of Fazbear. But holy Gods in heaven, I didn’t have a good time, and that was all atmospheric and nothing to do with the game itself. I’m gonna be hard pressed to try out Sister Location when that launches on the Switch, but, from what I’ve heard, it’s a totally different beast, so it should be okay. In the meantime, though, I’m getting those Fazbear icons off my Switch home screen: I’m done being creeped out for a couple of weeks.

A step up in innovation and difficulty, a step away from the core storyline, a step towards some sinister ideas and the last step I’ll take into Freddy’s world.