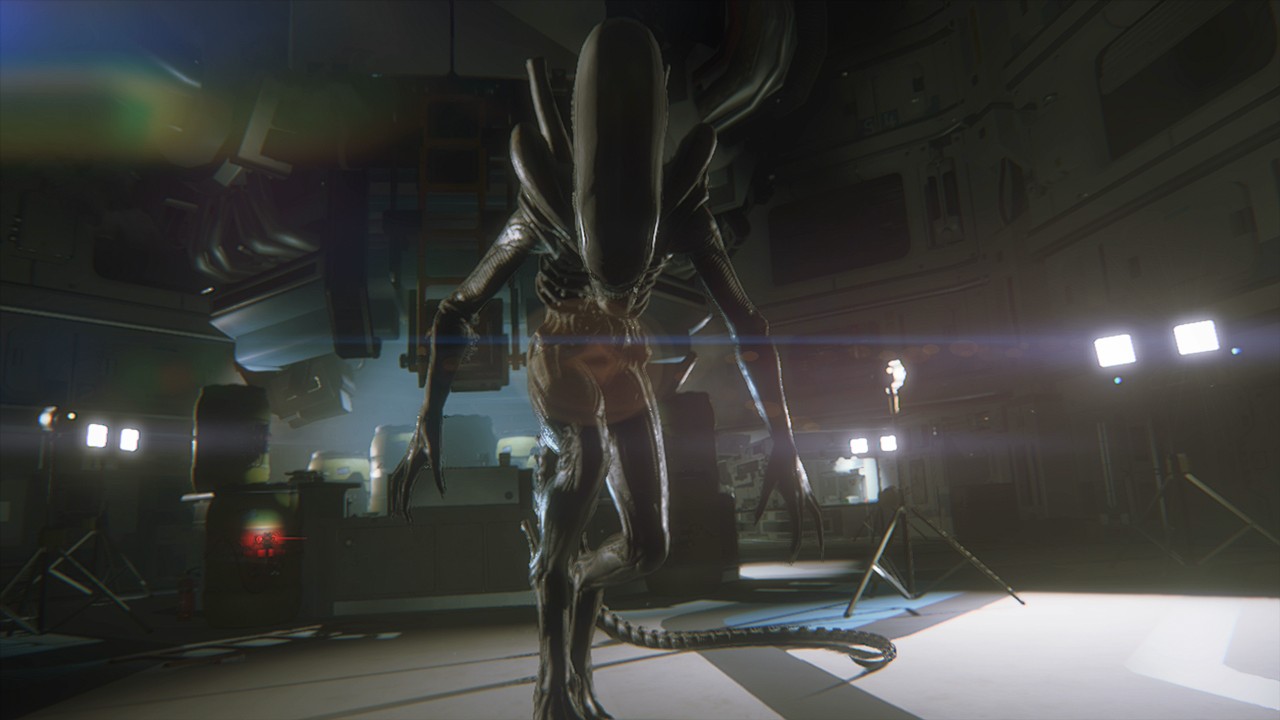 One of the reasons for the Nintendo Switch’s success is its versatility. That’s largely down to its ability to play games on-the-move or on the big screen, indulge in multiplayer mayhem wherever and whenever and, as is always the case with Nintendo, a library of games that ooze playability. From mobile ports to triple-A titles, there have been many games that have surprised us; especially with ports of mammoth titles such as The Witcher, Doom and Wolfenstein. However, just when I thought I had seen it all, Feral Interactive throw another title into the mix, as Alien: Isolation xenomorphs a release onto the Nintendo Switch.

Published through Sega, this is a game that has heralded a series of positive reviews since it first released on all major platforms in 2014. What makes this release more remarkable though, is that considering the architecture of the Switch, this port is still receiving the same praise as when it first launched and this is largely down to some impressive work from Feral Interactive that boasts a technical performance and graphical presentation that really isn’t that far off from what was experienced on the Playstation 4. Couple this with some new additions such as HD rumble, motion controls and all previously released DLC, this is a game that’ll have screaming in more ways than one.

The events of the game take place fifteen years after the setting of the 1979, original motion picture of Alien starring Sigourney Weaver as Ellen Ripley. In Alien: Isolation, you play the role of Amanda Ripley, Ellen’s daughter. Working as an engineer in the regions of space where her mother disappeared, Ellen is offered a place to join a team of Weyland-Yutani representatives who are embarking on a mission to the Sevastopol space station to recover a flight recorder that has been retrieved from the Nostromo; the original ship that featured within the motion picture and the last ship on which Ellen Ripley served. If you’re unaware of the original story, the Nostromo was infiltrated by a xenomorph that turned out to be a ruthless killing machine; disposing of the Nostromo’s crew with Ellen being the only survivor. 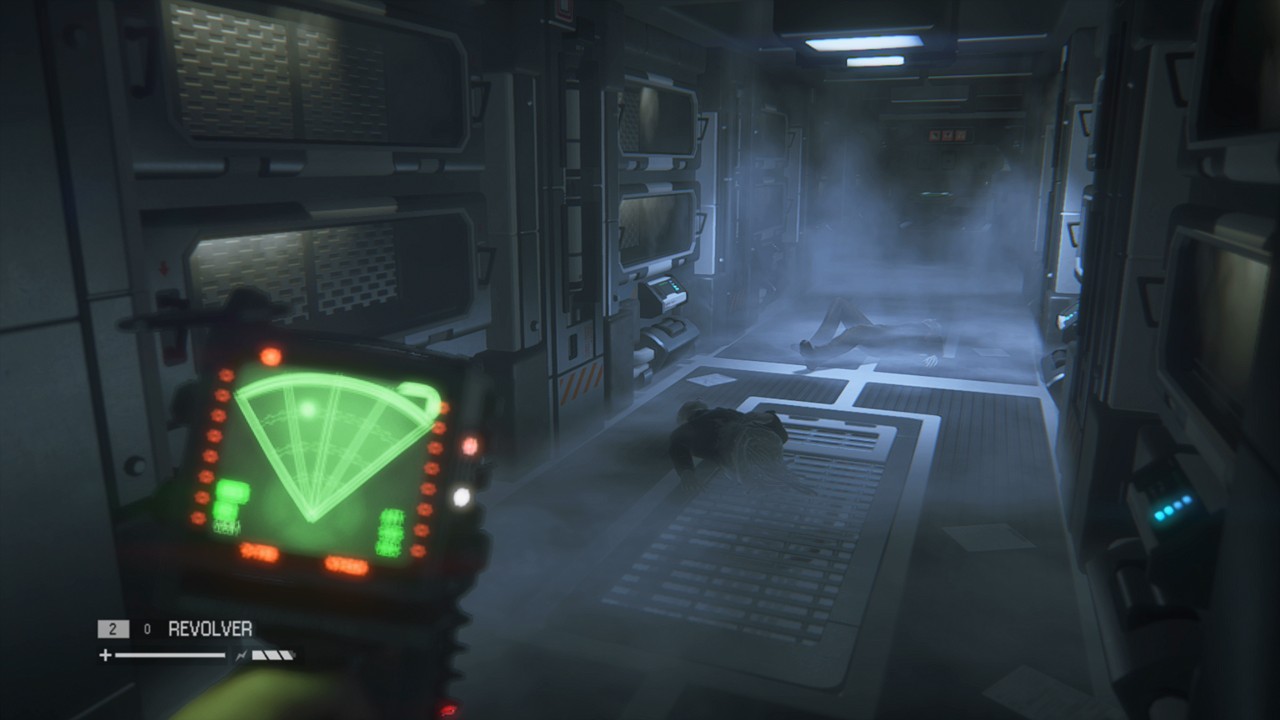 Viewed from a first-person perspective, the team arrives at the Sevastopol station and its clearly apparent that things are not right here. Separated from the rest of team, you must traverse the smoke and strobe filled corridors and vents of the space station as you search for the flight recorder in a hope of learning your mother’s fate. However, you’re not alone, as another xenomorph has made the station a hunting ground and rogue androids still patrol. What the game captures brilliantly here, is the whole aesthetic that revolves around the original motion picture. The interior of the Sevastopol has been superbly captured with a high level of detail that successfully replicates the feel of Ridley Scott’s masterpiece; making this one of the greatest horror survival games of all time.

If you’re a fan of Ridley Scott’s film, them just simply exploring the settings of the space station is exciting on its own. However, throw in the mix of, what is in my opinion, the most ruthless and feared alien ever devised, then the game takes on a completely new feel. There’s no gung-ho marines or running or gunning here, this is pure, adulterated horror in its purest form. It’s tense, it’s scary and truly captures the whole ordeal of trying to survive against a ruthless killing machine. It isn’t just the setting of the game that captures the feel of the films, it’s the whole presentation of strobing lights, flickering monitors and the sound effects that produce more jump scares than I would like to admit.

It’s true scale of terror comes from the horror of trying to escape the attentions of the alien xenomorph. The AI within the game is exemplary, from rogue androids who hide behind cover and try to flank you, to the alien itself that stalks on you and preys on your every movement and sound. It calls for a careful style of play, as any mistakes you make as the player will be pounced upon and see you meeting your fate as you get dragged into the nearest shaft or ripped to shreds from within the shadows. Again, it’s something that the game truly recreates from the movies and creates an air of tension that is unsurpassed by any other game within its genre. 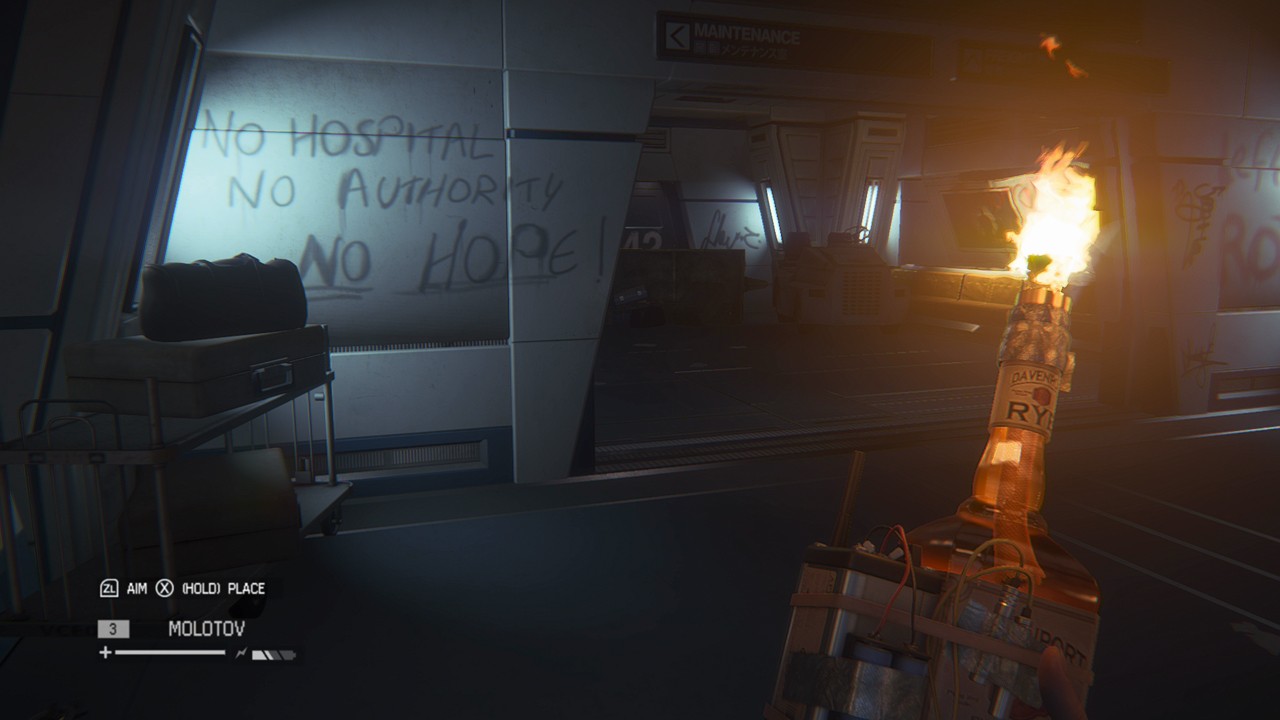 Despite its need for caution, the game plays at a good pace, with sections of careful exploration, terrifying encounters and tension in hiding. However, it also throws a variety if circumstances and events that keeps the game feeling fresh as you play through it and the core gameplay never grows old or feels stale; even through a second playthrough, everything remains intact. In fact, the further you delve into the game, the more it ratchets up the heat to a thrilling climax that is truly horrific. The whole design of the game has been superbly crafted, from the careful movements of Amanda to the overall aesthetic of Novastopol. However, it’s also the smaller details that adds to the overall aesthetic, from dancing shadows within the red glare of your flare, the molten cutting of doorways with your ion torch and the down-right horror of your motion sensor’s bleeps, as you focus from its attention to the knowing that there’s something ahead of you.

Although primarily a survival horror, there are also instances where you take the fight to the opposing forces. Items such as molotov’s and emp grenades can become vital; mainly in the need to provide a distraction in order to advance. Honestly, there’s nothing more tense than creeping past the hulking figure of the alien as it investigates the distraction that you may have caused across the other side of the room. It’s something that is simply unmatched by many other games. There is some gunplay at times too, as well as the famous flamethrower from the movies, but these are usually used to dispatch the androids that frequent the station. Be warned though, as helpful as they may be, they can also be your worse enemy! If the game comes with one downside, then it has to be the fact that this is a digital release only and there are currently no plans for a physical version and with a digital footprint of over 17GB, that can be a lot of memory space taken up on your memory card.

Overall, Alien: Isolation is a solid port that Feral Interactive should be applauded for. Everything from its original release is here and the standard of work that’s been put into it, puts this Switch version easily on par with the PS4 iteration. It looks fantastic and plays even better, producing the most terrifying game you can currently play on the system. With its new implementation of motion controls and HD rumble, makes this an instantly playable game on a handheld device and the inclusion of all previous seven DLC’s, including Last Survivor that recreates the events of the original film, makes this superb value for money. Despite seeing a number of releases on the Switch that have totally surprised, I don’t think any of them come close to this particular port through. There’s no loss of content or clarity, making this a game that will definitely be heard in space when you start to scream.

In space, no-one can hear you scream; unless you’re playing Alien: Isolation that is.