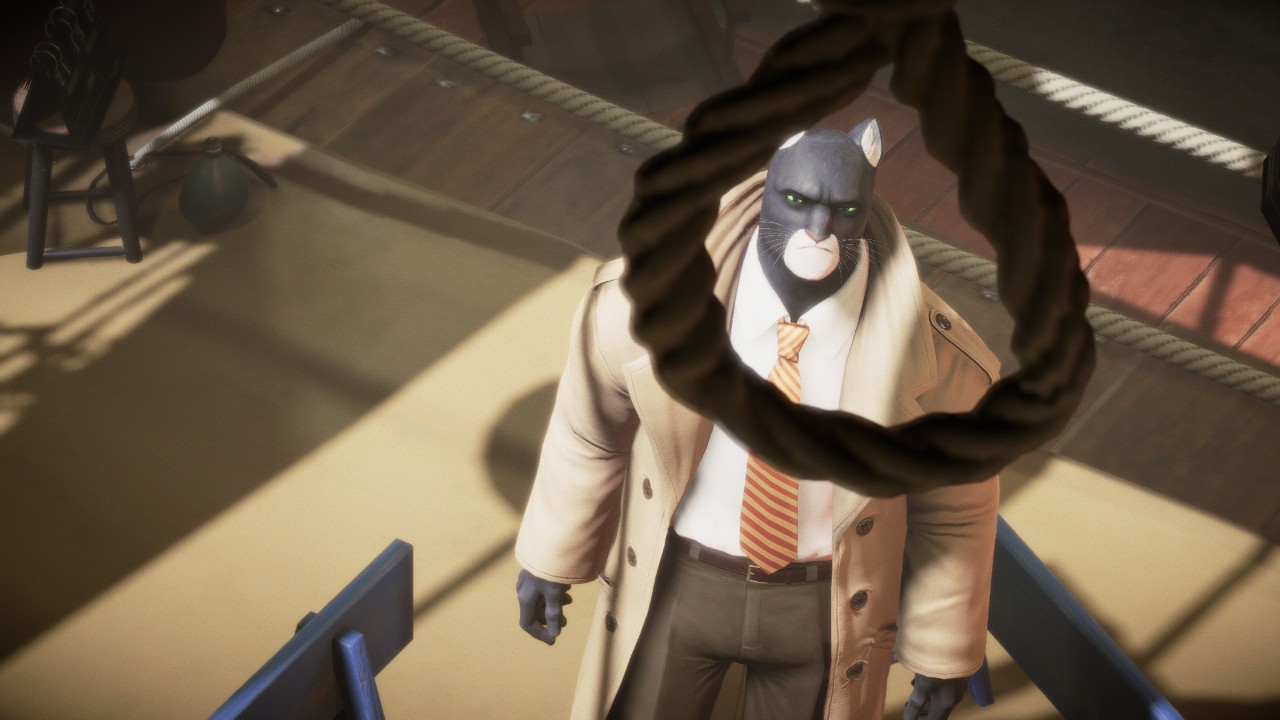 Blacksad: Under The Skin, an adventure, detective game developed by Pendulo studios and YS Interactive. The game is based on the comic book series by Spanish authors Juan Díaz Canales and Juanjo Guarnido. The comic book art style is presented throughout the game and the characters used are true to the original story.

In Blacksad you play the part of John Blackmore (Blacksad), a private detective who is hired to help find boxer Bobby Yale who has disappeared after his coach has committed suicide. Blacksad is suspicious of the circumstances surrounding Joe Dunn’s death, and so the investigation begins. With the help of Weekly who works for a tabloid called What’s News and Smirnov the police commissioner, you are tasked with solving the mystery and finding the whereabouts of the missing boxer.

From the beginning you see that Blacksad has a very distinctive style, the music and graphics set the scene of a 1950’s film based in the grimy New York City, where mobsters are free to roam the streets and control the population with threats of violence and gestures of grandeur. The twist in the tale is all the characters are animals. The protagonist is a black cat who reminds you of a well known superhero, and is a rather snazzy dresser to boot. You can’t help but look around at all the other animals as nearly everyone has been given a who framed Roger rabbit boost of sexualization. From a Rottweiler who has clearly been working on his summer beach body, to a cat who has assets that you can’t stop, ummm, admiring. Once you push through the surreal visuals you start to see how the game play works. A telltale game dialogue system which allows you to form the path of the game and Blacksad’s persona. The decisions made will influence the relationships you have with the other characters in the story. I was reminded of Terry Pratchett’s Discworld Noir and Broken sword due to the witty one liners and the puzzle solving, along with the relatively small areas which needed to be searched to find clues.

The developers clearly wanted this to be viewed as an unusual film noir title, where the plot should be taken seriously with a splash of dark humour added to the mix to lighten the mood. Unfortunately the absurd nature of animals performing the most basic of human tasks has a number of humorous undertones, and so you can’t help but laugh, even at some of the most inappropriate moments. Blacksad also tries to touch upon the serious subject of racism, as represented in the rather brilliantly written comic books. The game delivers misspelt racist graffiti and highlights class separation due to skin colour. This a difficult subject to inject into a game and unfortunately I do not believe the writers succeeded. It added nothing to the characters, nor did it play a vital part in the game play, so could and should have been avoided. 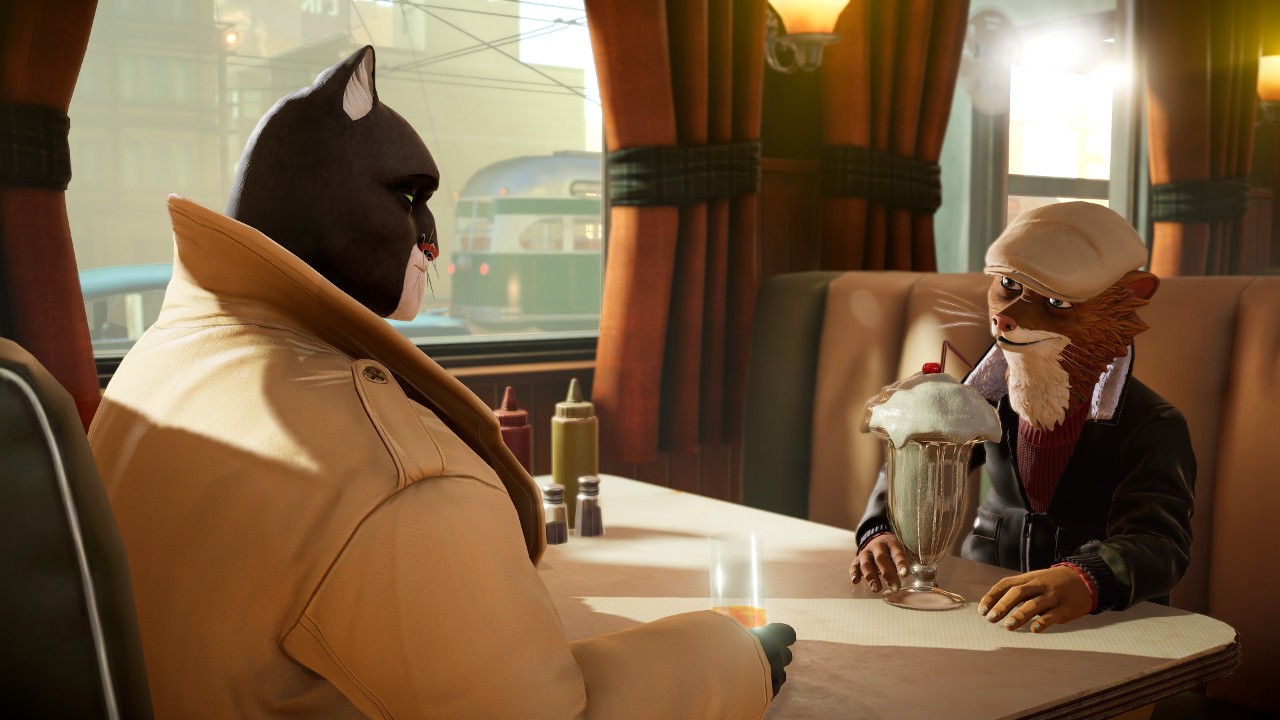 I mentioned that Blacksad had the feel of a 1950’s film, the music used to instantly transport you to a post war era, with the Jazz beat complimenting the action unfolding within the story. The voice-over work has to be some of the best I’ve heard in a long time. The line delivery and characters that are brought to life really make you feel involved in the story, I felt genuinely interested in how they would react to my dialogue decisions. Even with the game trying to take itself seriously, the one liners are highly amusing and made me laugh throughout. The narrative of the game is delivered by Blacksad’s thought process. As part of the mystery is uncovered, his rationalization of the information pushes the story forward, and helps you to keep on track with the comic like tale.

The cinematic used was both beautiful and infuriating. Watching the scenes develop was like observing a comic book coming to life where I was the artist and I could determine how each stage came to its conclusion. The infuriating moments appeared when I made a mistake in my decision making and was then forced to relive the scene several times over. That beautiful thing soon got very old, and the developers decided that they wouldn’t provide you with a skip scene function. Throughout I identified graphic glitches that never really impacted on the game, but were just obvious, such as; random black boxes that would appear in view, rubber banding, characters merging, items vanishing, and mouths moving without syncing to the words being spoken. But most infuriating of all was the game freezing. Walking, walking, and more walking and then POW you’re stuck in time, frozen for however long the game fancied. This pause of time leaked into the horrible clock watching loading screens. At one point I spent more time loading the game than I played it.

To add an extra element to the game the developers decided to stay away from simple point and click game play and gave you the ability to walk around this surreal world. This freedom allowed for stickers to be hidden in each of the scenes, search high and low and complete the hall of fame sticker book collection. A great addition to the player who likes to complete a game 100%, however, there are some major downsides to both the freedom of movement and the sticker book collection. The controls are clumsy at best, Blacksad having the turning circle of a tanker, it was reminiscent of playing a game before analog sticks were invented. Also the controls are not very responsive, so searching for items and clues can require several attempts before you succeed. The final frustration, if you miss a sticker and you cannot return to that area, then the Hall of fame will remain incomplete unless you play the game through again. 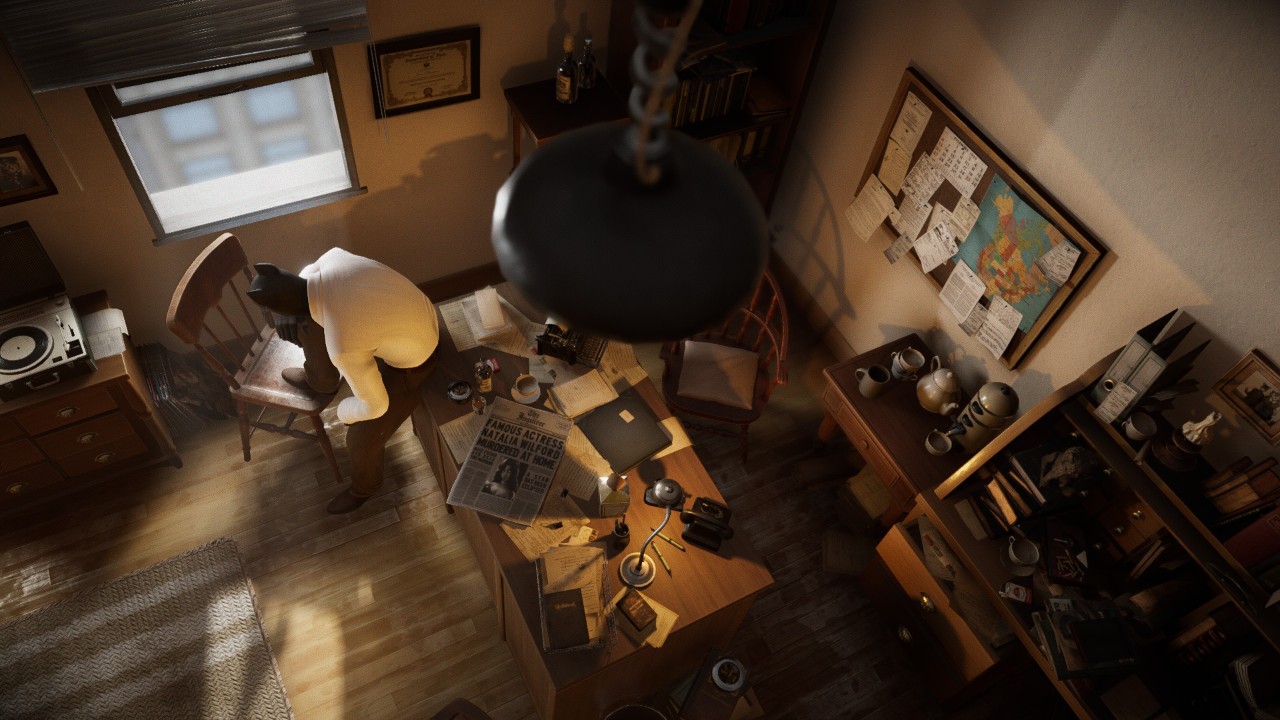 A detective game wouldn’t be complete if you didn’t have the opportunity to gather clues and solve the mystery yourself. With the help of the rather clumsy control system and John Blackmore’s special cat senses you are able to search, see, hear and sniff out clues with ease. As you discover information it is stored in your notebook. Once you obtain enough to come to a valid conclusion you must piece together the evidence to move the story along. The deducing of the information was extremely basic and rarely will you find this a challenge. The rate at which you solve problems will make you feel like a modern day Sherlock Holmes.

Due to the consequences of your decisions the game path can alter throughout each play through, so those who would like to explore different avenues will be able to revisit the game and will get a new perspective on the crime. Also for anyone who likes to gain all achievements you will be challenged by playing it several times to reach that maximum score.

A game from the offset that promised so much with its striking visuals, fantasy and surreal characters and its often unintentional humour. It unfortunately failed to deliver on a number of fronts. A detective game that gives very little challenge in solving the mystery. The hardest part of the game has no impact on the story and can be completely ignored and that’s the collection of the stickers. With cumbersome controls and frustrating loading times you’d think I’d advise you to give this game a miss, but I won’t. For all its faults I actually enjoyed it. The music is a delight and the voice acting excellent. The narrative told through John Blackmore’s thoughts was an interesting method to progress the story. Though the deduction of clues was not difficult, it was a fun way to solve the crime. With the developers promising a patch to work on the majority of the bugs, Blacksad could have most of its issues ironed out pretty quickly, making this a simple, enjoyable and quirky murder mystery.

Blacksad: Under The Skin Review

A simple case of find the missing boxer takes a darker turn as Blacksad’s feline instincts tell him something is terribly wrong. A murder, rival mobsters and love triangles all await you in this gritty 1950’s detective drama.