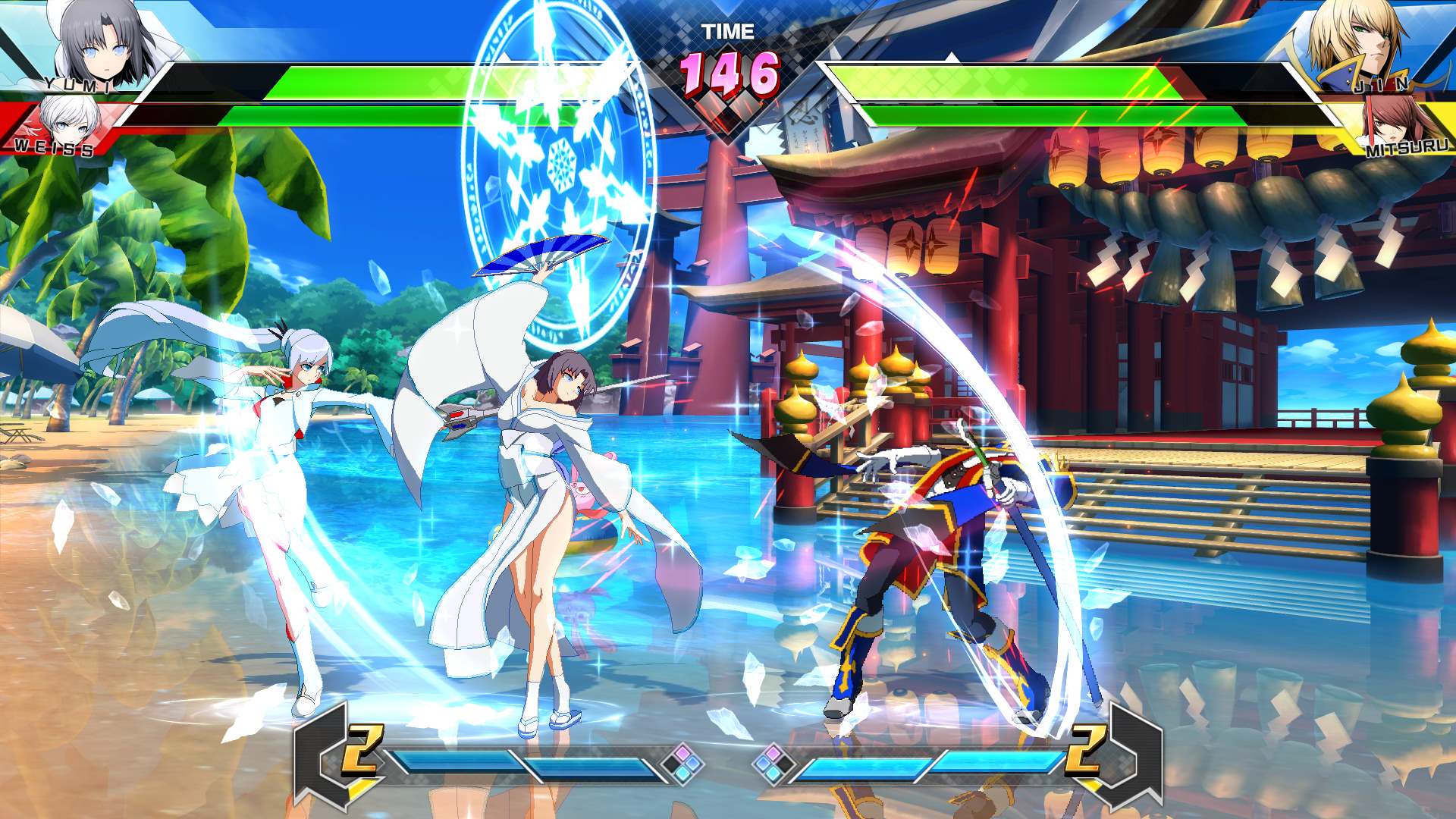 BlazBlue Cross Tag Battle: Special Edition is the latest game in the long running BlazBlue series, developed by Arc System Works. As you can guess from the title, this entry is a bit special since it’s also a crossover with a few other series’. In addition to the usual BlazBlue characters, Cross Tag Battle also features characters from Persona 3 and Persona 4, RWBY, and Under Night In-Birth. Characters from Arcana Heart, Senran Kagura, and Akatsuki Blitzkampf have also been added after the game’s release as DLC. The Special Edition that I’m reviewing comes with all of the DLC characters, as well as the 2.0 version upgrade that comes with even more characters and extras.

The game’s menu comes in hub form, with the player controlling an avatar that walks around to access different areas that represent different menu options. The hub’s background music can be changed by the player, which is a nice touch. You can quickly access the game’s story mode from the hub, where you’ll find that there’s a story for each of the series’ that was present when the game launched. So no DLC series stories, in case you were wondering. These stories are quite detailed, with multiple chapters. Like previous BlazBlue games, it’s all told in visual novel format, broken up a little with some battles taking place in important scenes. There’s plenty of fun character interactions here, especially between the character from different series. It can feel a bit surreal at first seeing Yosuke from Persona 4 and Ragna from BlazBlue on the same screen, but it’s fun to see them fight together.

The cross over elements of BlazBlue: Cross Tag Battle are naturally one of its biggest draws, and the game offers plenty of opportunity to make use of them. The Special Edition with the 2.0 upgrade is packed with characters. There’s 19 from BlazBlue, 13 from the Persona series, 12 from Under Night In-Birth, 5 from RWBY, 1 from Arcana Heart, 1 from Senran Kagura, 2 from Akatsuki Blitzkampf. With 53 playable characters in total, it’s a massive roster. You can mix and match these characters freely, which makes for an impressive variety of teams and combos.

BlazBlue Cross Tag Battle’s biggest challenge is taking characters from games that feature different fighting systems and making them all work together while still being faithful to the source games. Fortunately, Arc System Works have done a good job of this. BlazBlue Cross Tag Battle’s fighting system brings all of the series together by featuring a somewhat simplified battle system. There’s two main attack buttons, plus a tag button, partner attack button, and an overhead attack that can double as an EX attack. This system makes the game more accessible, but still manages to maintain enough depth to keep the game interesting for more hardcore players. The system still has plenty of combo potential, and there’s also a focus on finding openings in your opponent’s attacks where you can punish them with a flurry of attacks. 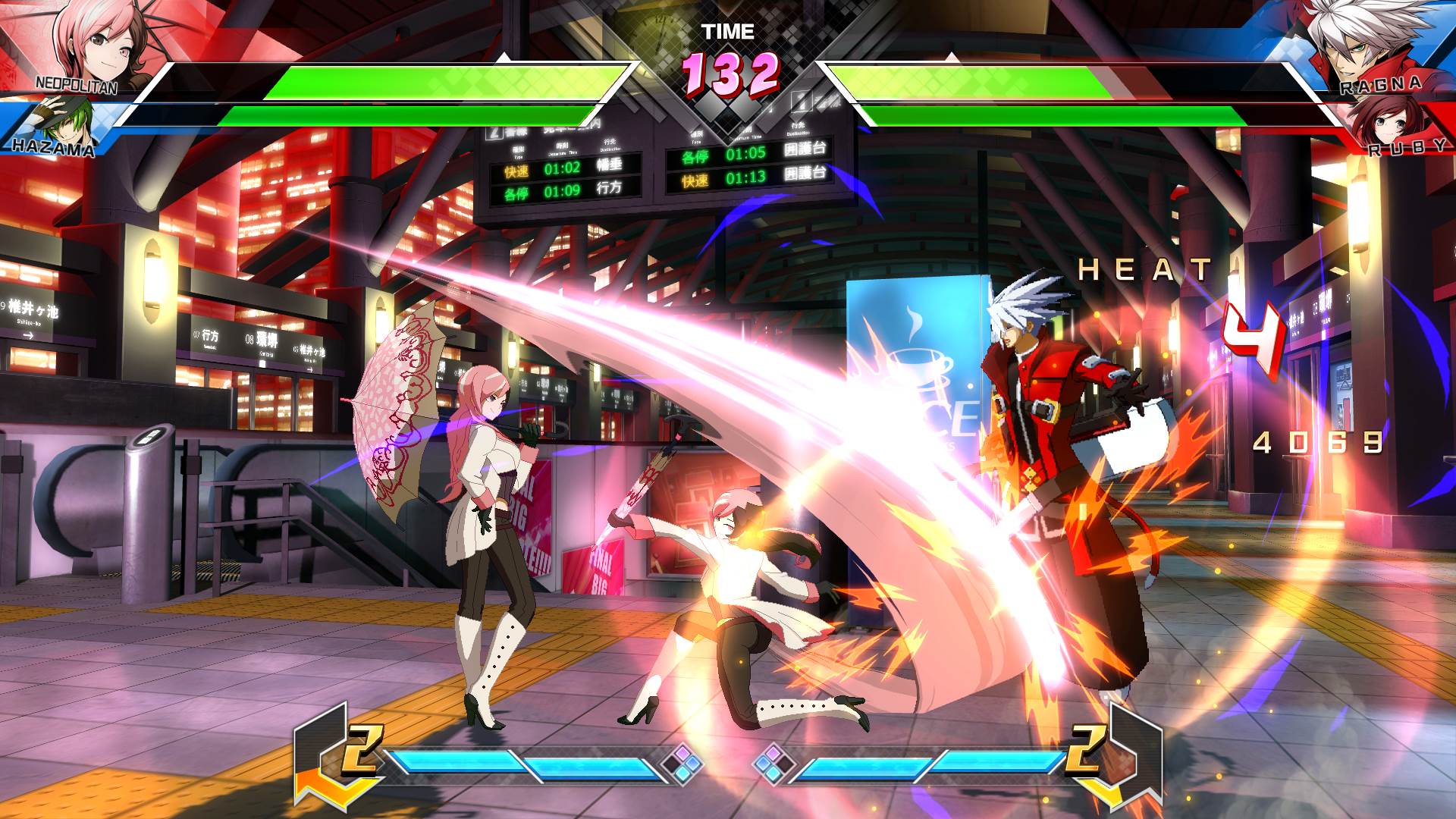 A notable change for the Persona characters in Cross Tag Battle is that they no longer have a Persona gauge like they did in their source game, Persona 4 Arena. This gauge used to allow opponents to cancel a player’s Persona attack with a well timed strike. If this happened to a player three times, they would be unable to use any Persona attacks for a while. It was a way to help balance Persona 4 Arena and stop people from spamming flashy attacks. Cross Tag Battle removes this system, in favor of fast paced battles where the Persona moves can still be cancelled fairly easily, but with no penalty to the player in order to keep the attacks flowing. Distortion moves make a return from the previous BlazBlue games, allowing characters to pull off some super moves that deplete their super gauge. When one of the characters in a tag team is defeated, the remaining character can activate the Resonance Blaze mechanic. This mechanic puts your characters into a super mode where they regenerate health, fill their skill gauge over time, and power up their Distortion moves. Resonance Blaze only lasts for 15 seconds though, so it’s essential to make good use of the time. With the right moves, it’s possible to use it to turn the tide of a battle.

In addition to the standard story and versus modes, there’s also a handy area called Tactics Mode. This is designed to teach players the ins and outs of Cross Tag Battle’s fighting system. It covers everything from basic moves to advanced mechanics as well as how and when to use each of them. Every character has their own tutorial to help players get familiar with their moveset, and also allows players to practice combos. For veteran players, there are also a bunch of challenge missions available that allow them to practice some of the more situational moves in situations that they might find in matches while playing online. 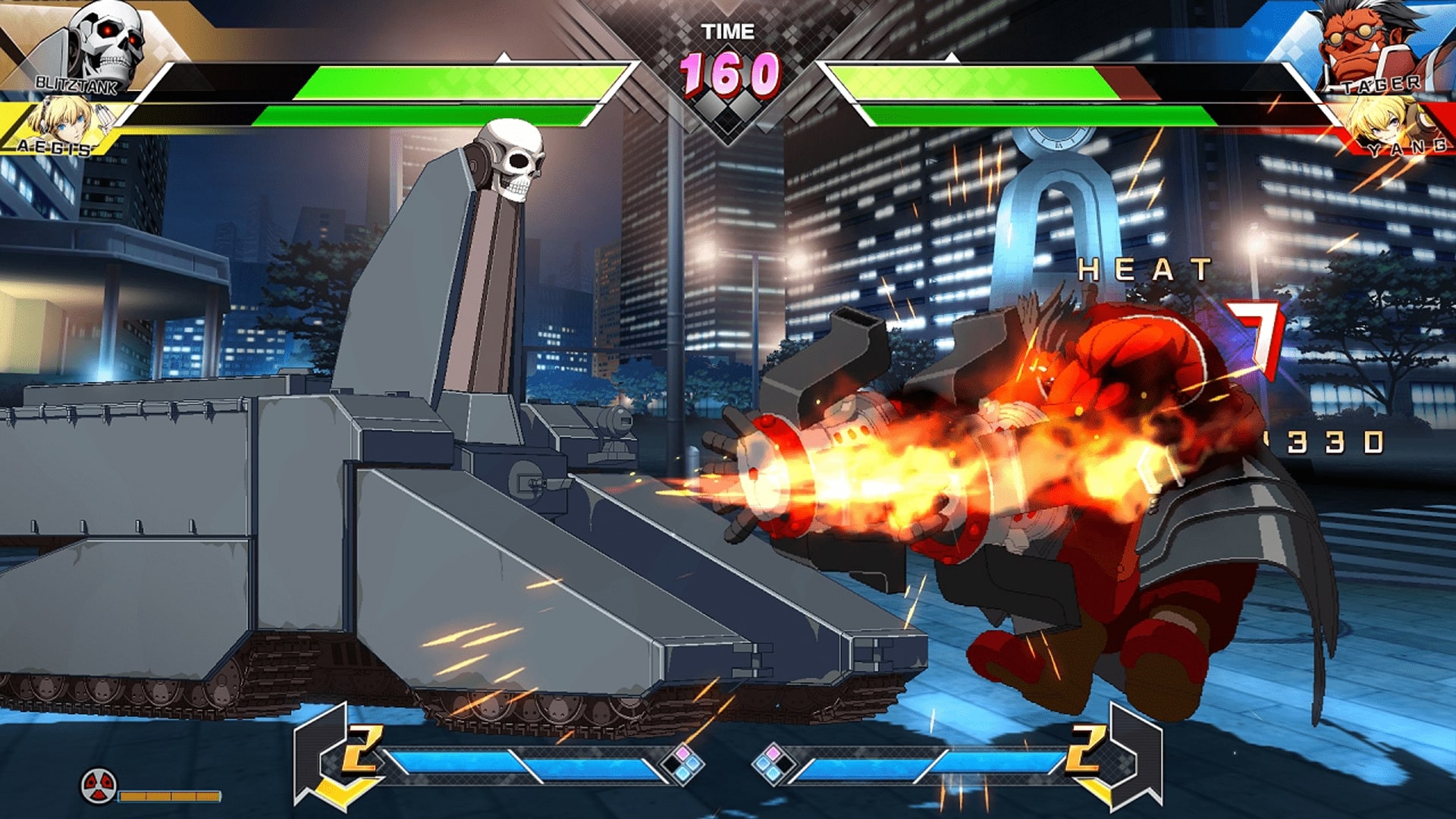 Visually, BlazBlue Cross Tag Battle is pretty decent. The menu presentation is great, and the 3D hub area looks good. The character sprites are generally easy on the eyes and fluidly animated. Their moves chain together well and there’s some flashy attacks. With that said, some of the character sprites are looking a bit dated now, particularly the Persona characters who have been imported directly from their PS3 fighting games.

BlazBlue Cross Tag Battle’s soundtrack is great, with a large number of songs taken from each of the represented series’. All of these songs can be used as background music during fights, as well as in the hub area. The game’s lengthy story mode is fully voice acted, which is a real treat for fans. There’s lots of fun dialogue and action.

Overall, BlazBlue Cross Tag Battle is a solid new entry in the BlazBlue series, one that does a really good job of bringing a bunch of different series together in a cohesive way. The Special Edition in particular offers a lot of bang for your buck, with lots of content and one of the largest rosters ever seen in a fighting game. The sheer amount of variety and possible combinations is impressive. It’s a game that all fighting game fans can enjoy, including the more casual ones thanks to the somewhat simplified controls and systems. Seeing such a wide range of characters come together and interact with each other in new ways is fascinating, and well worth checking out.

BlazBLue Cross Tag Battle is a solid new entry in the BlazBlue series, one that does a really good job of bringing a bunch of different series together in a cohesive way.