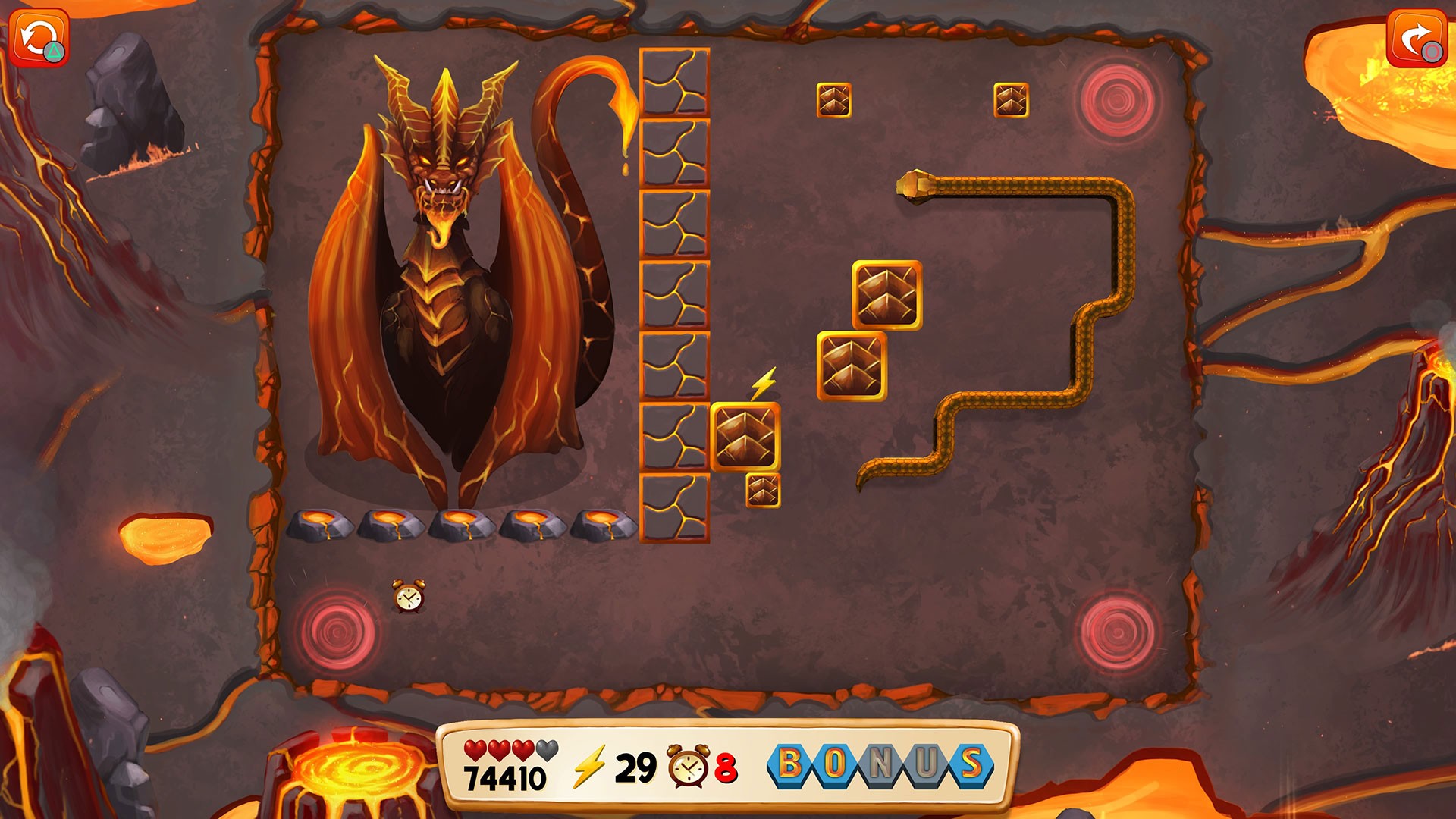 One of the earliest mobile phone games was Snake, anyone who had a mobile in the latter nineties/early noughties will remember spending many a hour moving a little snake like creature around your small screen collecting little dots which would make you bigger. You’d carry on until you would hit yourself or maybe the edges depending on your version, then you would repeat trying to beat your high score. Well, you may be surprised that there has been a reboot of Snake for consoles in the form of Classic Snake Adventures.

Classic Snake Adventures is very similar to it’s original, you move your snake up, down, left or right around a screen consuming fruit whilst trying not to hit any obstacles. Once you’ve consumed a set number of fruit then you complete the level and move on to the next one. Each level has a border so you can go through one side and appear from the opposite side like you could in some versions of Snake. The usual Snake rules apply in Classic Snake Adventures, if you hit an obstacle such as a wall or something similar then you lose a life, you can have up to four lives. If you lose all your lives you will fail the level. There are 100 levels in total with 20 different bosses to beat. The snake you control will increase in size and speed when you eat. If you eat the meat you will increase quicker, soda cans will make you smaller so easier to control. There are turbo boosters that will give you a short burst of speed. There are also bonus letters which spell the word….BONUS. If you collect all the letters then your hearts will refill to maximum and you will acquire some bonus points. 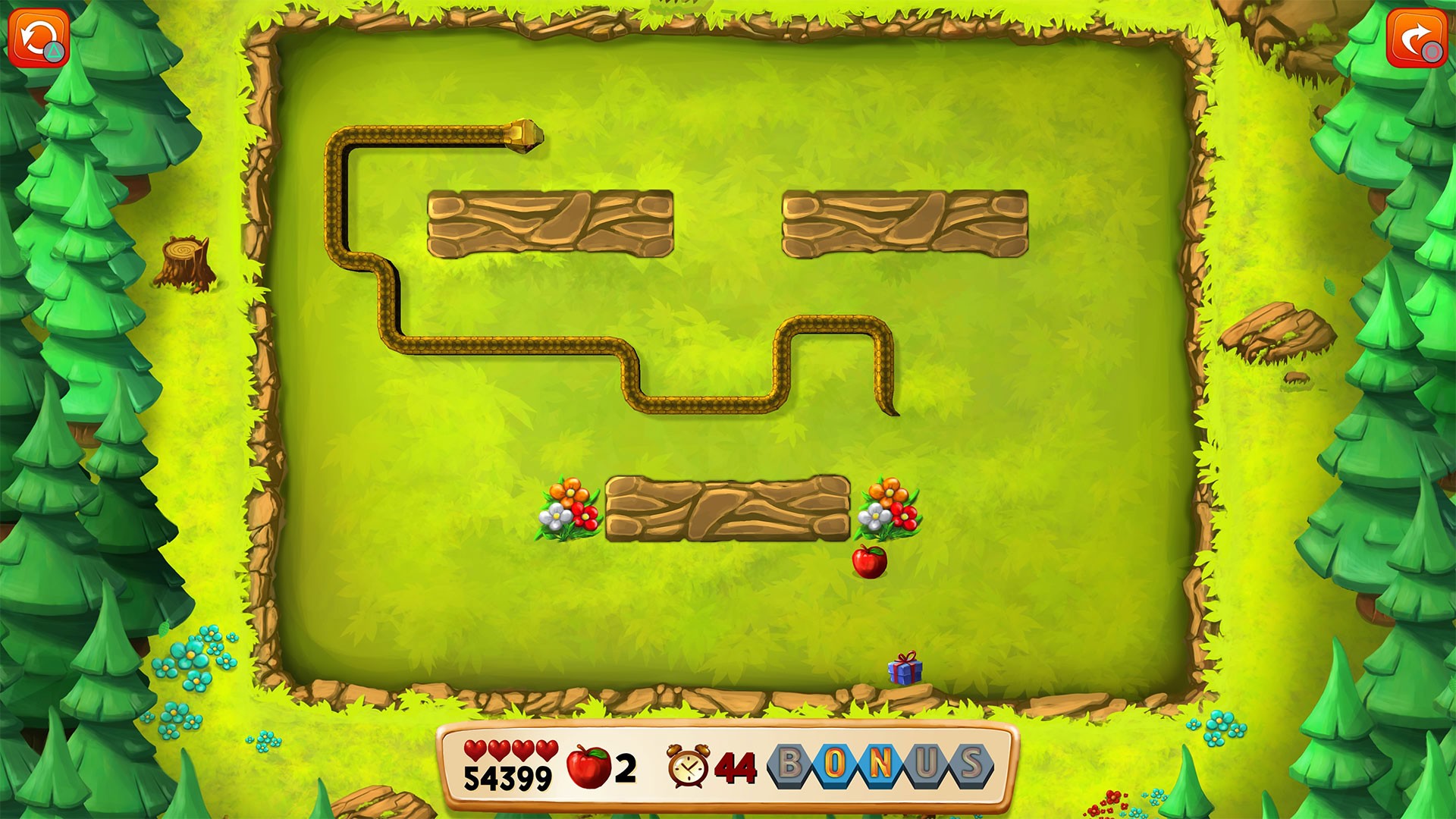 Classic Snake Adventures, just like the original, is an easy game to get into. Navigating the snake is fairly straightforward and works well using a controller. You don’t need to press any other buttons so you can just concentrate what’s happening on screen. As you progress across the five worlds containing 100 levels there isn’t much variety in what you need to do. Each stage plays out exactly the same, just at a faster pace with more obstacles, so in a repetitive sense Classic Snake Adventures gets suitably more challenging as you complete each level. Depending on how much time is left and how many hearts you have, you will receive between 1 to 3 stars on your performance, this doesn’t have any affect on anything. The boss levels are a little different, much of the screen is covered by the boss who will begin conjuring up blocks on the map. Instead of fruit you need to collect lightning bolts, which will strike the boss as you touch it. It’s pretty similar to the main game but it’s a nice change up on the original game.

You will score points as you make your way through Classic Snake Adventures. The more hearts you have when you finish a level will result in more points, the more you collect on screen will result in more points being acquired. Time is also a point giver, the more time you have on the clock when you complete a level then the more points you will generate. As mentioned earlier, collecting the BONUS letters will increase your point total. Thankfully there is a reason behind having a points tally, you can upload it onto the world leaderboard, so you can see how well you are doing against others. 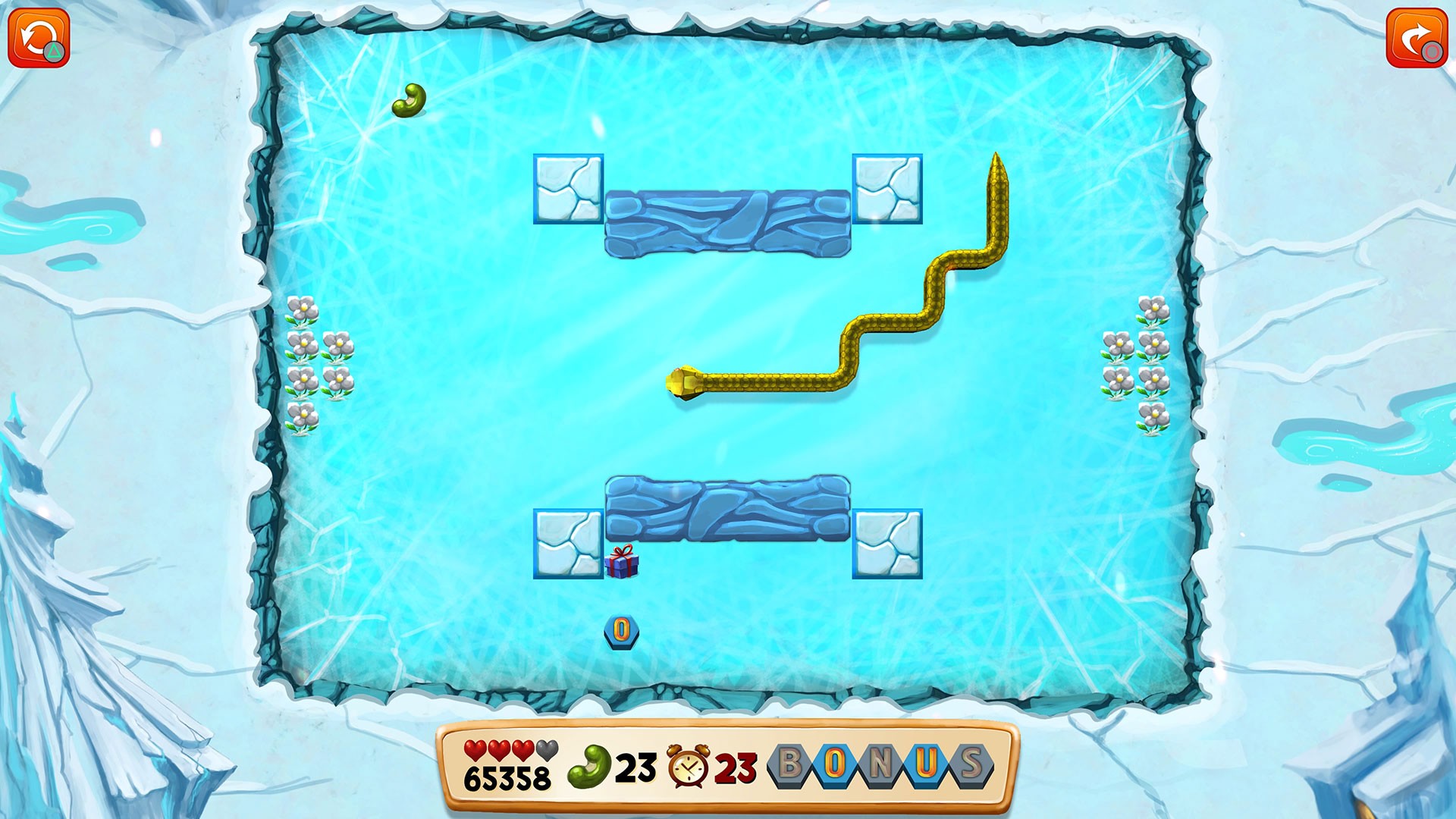 Classic Snake Adventures is a safe update of a classic game.