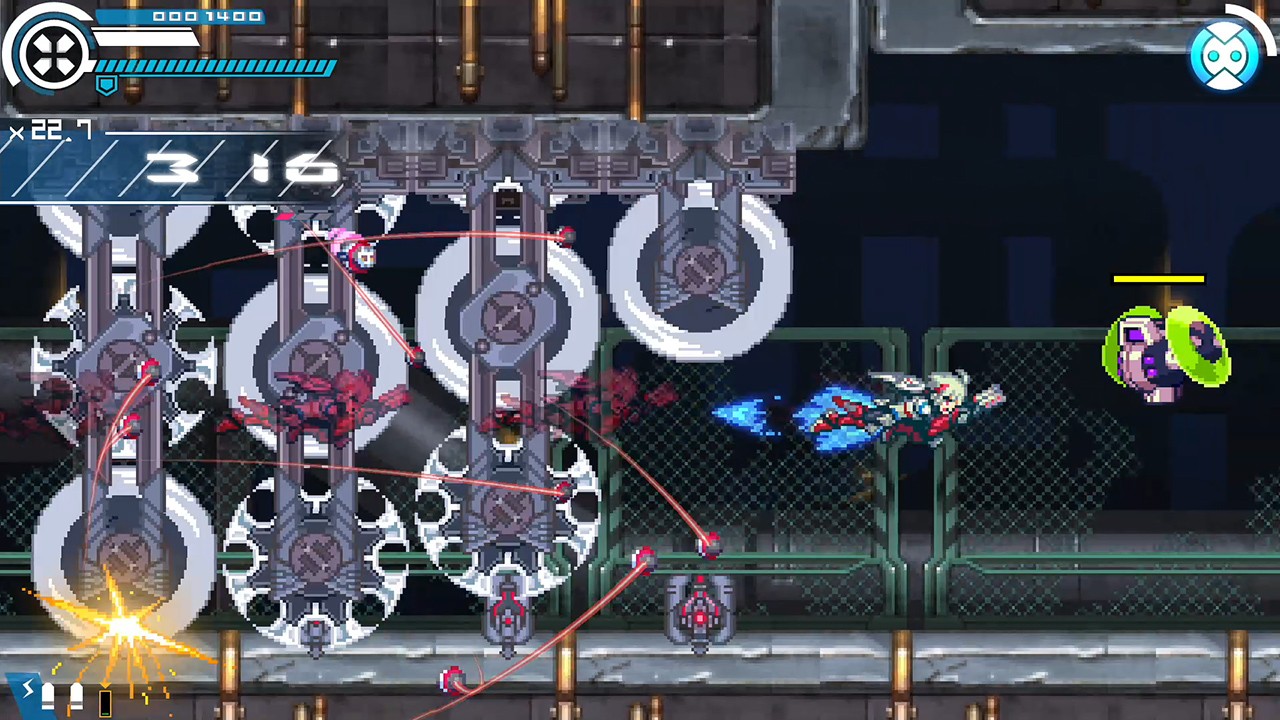 Inti Creates…..well, for all intents and purposes, Inti Creates Mega Man games. Really good Mega Man games. With Capcom kind of dropping the ball on the Blue Bomber (despite Mega Man 11 being perfectly decent), Inti Creates have been quietly building their own repertoire of Mega Man-alikes via their hugely successful and largely brilliant Gunvolt series.

After splitting from Capcom in the mid-90s, Inti Creates worked on a number of Mega Man Zero and ZX games before more famously assisting on the somewhat ill-fated, Mighty No. 9. While that game failed to set the retro gaming world alight, its far superior spin-off, Mighty Gunvolt brought attention to the developers flagship series, Gunvolt – Inti Creates’ own take on the genre that, despite the occasional foray in to more 8-bit inspired visuals and gameplay mechanics, primarily takes its roots from the Mega Man X and, for obvious reasons, Zero series of games.

The latest, and arguably finest game in the series, the rather absurdly named, Gunvolt Chronicles: Luminous Avenger iX might deliver little in the way of genuine innovation, but what it lacks in invention, it more than makes up for via its exceptional gameplay, gorgeous art design and brilliant soundtrack. This is still the genre as you know it, but this is a series that has been fine-tuned to within an inch of its life by a team with more than two decades of experience working in the genre. The mechanics are all largely recognisable, but their use of those mechanics and the way that they play off each other combine to create a surprisingly unique gameplay experience.

While the story won’t be for everyone, Inti Creates clearly have a love for the world that they have created – something made clear by the surprisingly large amount of dialogue in the game. The ongoing story of the evil Sumeragi and the ruling class Adepts, the long suffering Minos and the heroic and suitably grumpy, Copen (otherwise known as iX), won’t be for everyone, but beyond some interesting character buffs linked to listening to additional conversations between stages, it’s easy and in no way detrimental to the gameplay to skip the entirety of the story. 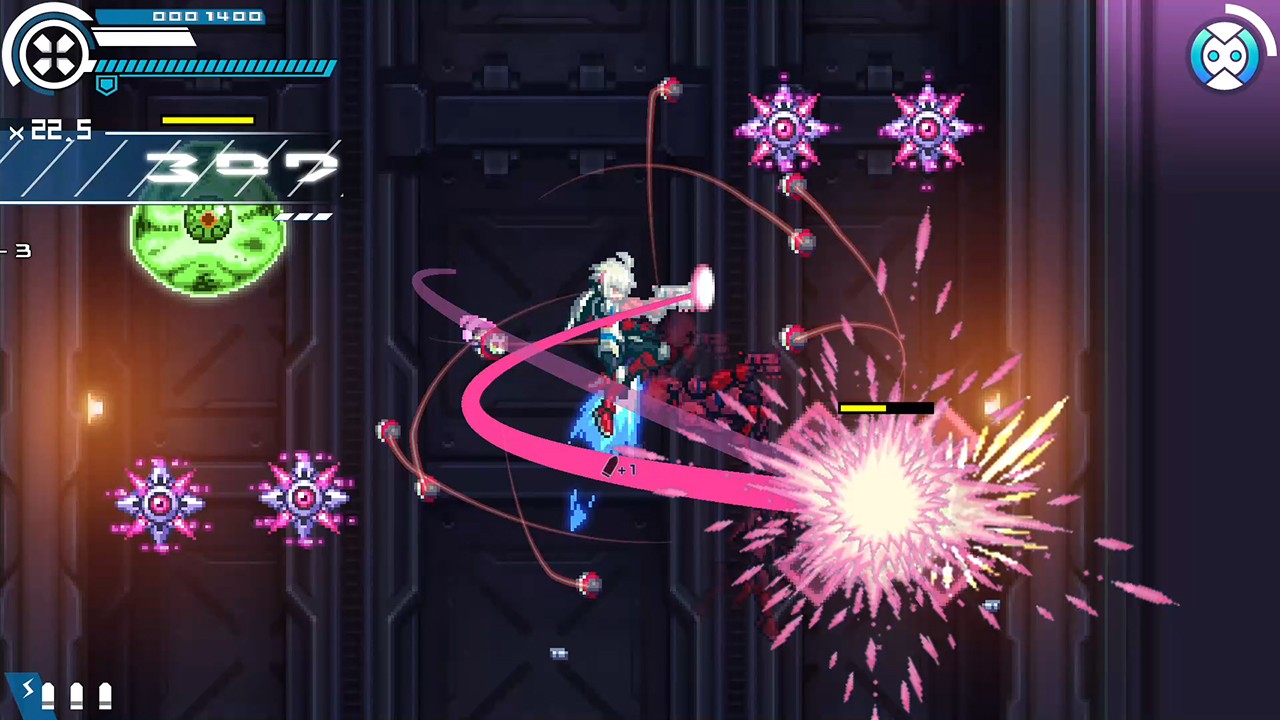 And let’s be honest, whether you’re in to the anime-inspired narrative or not, what we’re really here for is the gameplay, and in that department, Gunvolt Chronicles: Luminous Avenger iX delivers in spades. Whether it matches the finest games in the Mega Man series is up for debate and will depend largely on whether you prefer the 8-bit incarnation or the flashier 16-bit inspired, X series, but whatever the case, judged on its own merits, Inti Creates’ latest is an exceptional action platformer, one as likely to please newcomers as long-standing fans of the genre.

One of the things it does better than most games in the genre is to provide a genuinely accessible experience. This is not an easy game, and in all honesty, it doesn’t do a great job of explaining the mechanics at the start (you’ll need to go in to the menu for that), but it’s not absurdly difficult game either. There are options to ramp things up or to make things easier, but on the default setting, most seasoned gamers shouldn’t have too much trouble making their way through the majority of the game. The real challenge, like the finest Platinum Games offerings, comes from completing the game with style and achieving those elusive S ranking. This is a game that, while totally possible to plod through, encourages players to tear through at an electric speed and with a very aggressive play style.

Via the use of the excellent dash capabilities, the inspired Bullit system and the often game changing lock-on system, Gunvolt Chronicles: Luminous Avenger iX is a game that not only wants you to finish its stages, but wants you to finish them at a million miles per hour. Fans of the slower paced Mega Man’s from the NES era might find it a touch frantic, but I for one loved the fast pace, aggressive gameplay and the utterly addictive score chasing.

The game itself isn’t particularly long, and if you’re just looking to finish the game, you’ll likely do so in 3-4 hours, but for those looking to master Gunvolt Chronicles: Luminous Avenger iX brilliantly crafted stages, a much longer experience awaits. Beyond the use of your special abilities and super attacks via your AI companion, Lola, if you aim to inch your way towards those hard to reach S rankings, you’re going to have to master the use of the Bullit, dash and lock-on systems. 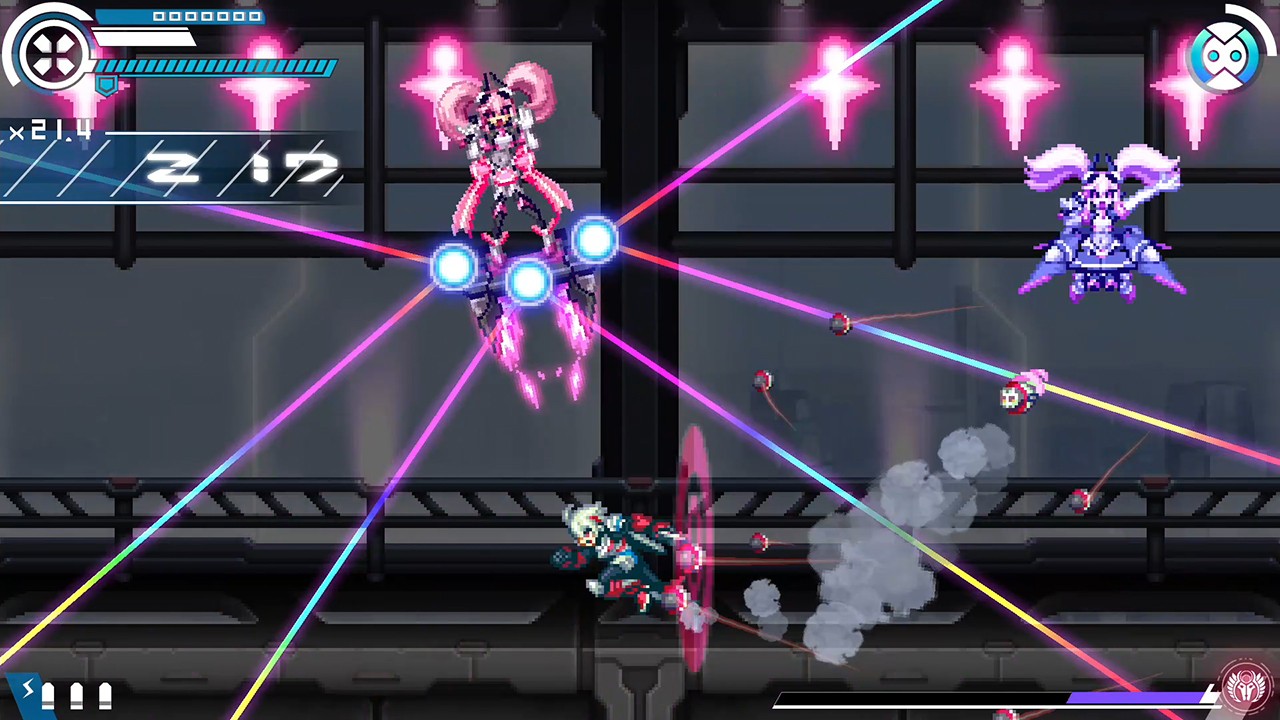 None of these are particularly new or complex on their own, but the link and subsequent management of all three leads to a surprisingly unique and often relentless gameplay experience. Having the lock-on system linked to dash attacks is particularly inspired, and with both only available if you have reloaded your ‘Bullits’, the entire system has a brilliantly harmonious, circle of life thing going on that essentially drives the game forward at all times.

Beyond the stellar gameplay, like the majority of Inti Creates games, Gunvolt Chronicles: Luminous Avenger iX is imbued with an utterly gorgeous, sprite-based art design that often puts the likes of Mighty No. 9 and Bloodstained to shame (both games that they worked on to one extent or another). The soundtrack is equally fantastic, something unsurprising for a company that has published numerous albums. It’s hardly Mega Man 3, but it still sounds great all the same.

Gunvolt might not be a household name in the same way that Mega Man is, but this is a series that is going from strength to strength with the latest, Gunvolt Chronicles: Luminous Avenger iX, arguably being the best of the bunch. The (easily skipped) narrative won’t be for everyone, but the gameplay is stellar throughout, offering up a fast-paced, aggressive and perfectly formed action platformer, one that stands out thanks to its exceptional gameplay, gorgeous sprite-based visuals and fantastic soundtrack.

Gunvolt might not be a household name in the same way that Mega Man is, but this is a series that is going from strength to strength with the latest, Gunvolt Chronicles: Luminous Avenger iX, arguably being the best of the bunch.