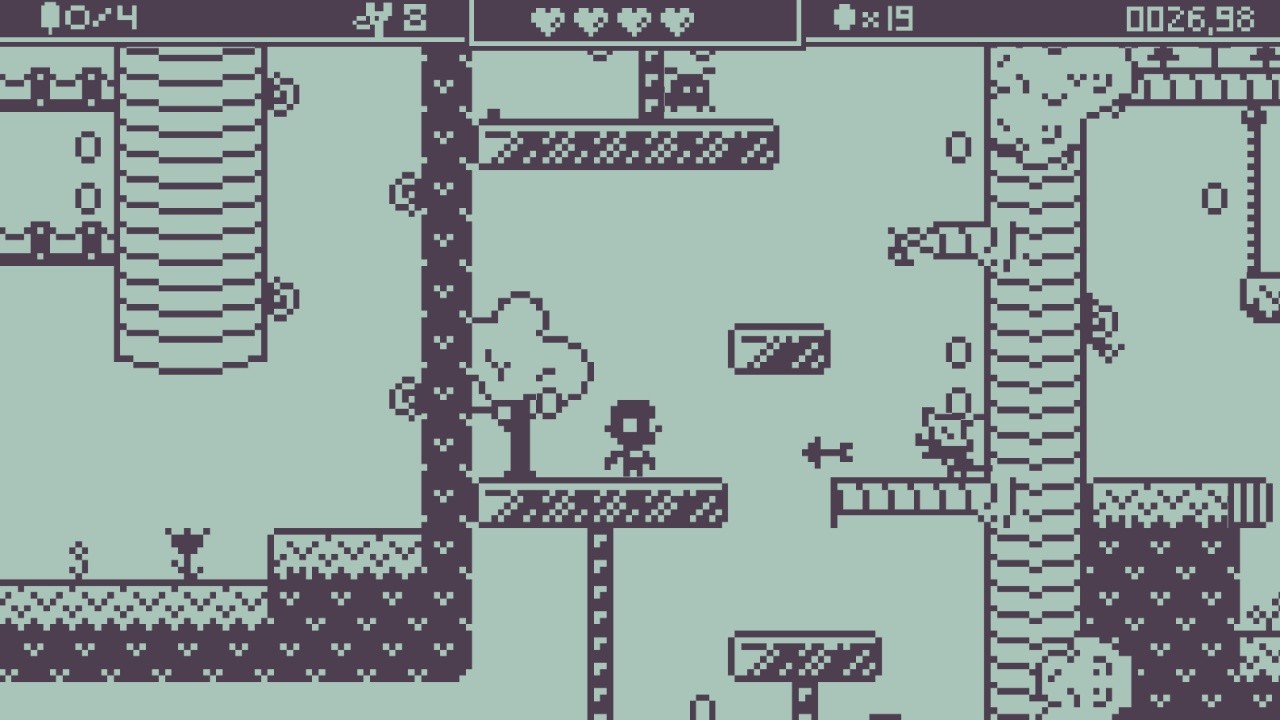 Pixboy is a retro 2D puzzle-platformer, created by indie developer Oaky Games. The blocky graphics, whimsical music and simple, yet effective platforming will have you wondering if you’ve gone back in time.

The first thing you’ll notice about Pixboy is the graphics; blocky, chunky and with all the vintage feel of the Atari 2600. Despite the simplicity, there are plenty of details in the backgrounds that all adds up to make Pixboy feel like a real labour of love – clouds floating by, trees, flowers and shrubs peppering the platforms and some interesting shading. The chiptune music is delightful too, and perfectly complements that retro feel that Pixboy does so well in capturing.

The controls are fairly basic and what you’d expect from a 2D platformer. You can jump, press the same button while in the air to soar, and even shoot once you pick up the slingshot in Level 3. This is useful for killing enemies, but note that ammo is not infinite – if you run out, you can collect more by jumping on enemies to kill them.

Coins are the currency within Pixboy and there is plenty to collect in every level, some in plain view and some hidden in secret ‘rooms’ or areas that you must go looking for if you want to collect everything. In each level, there are also several ice lollies to be found. These are particularly well hidden or in hard to reach places, presenting a nice challenge. While the coins can be exchanged for ‘colours’, however, the ice lollies are for show only, and there’s no real incentive to find them. 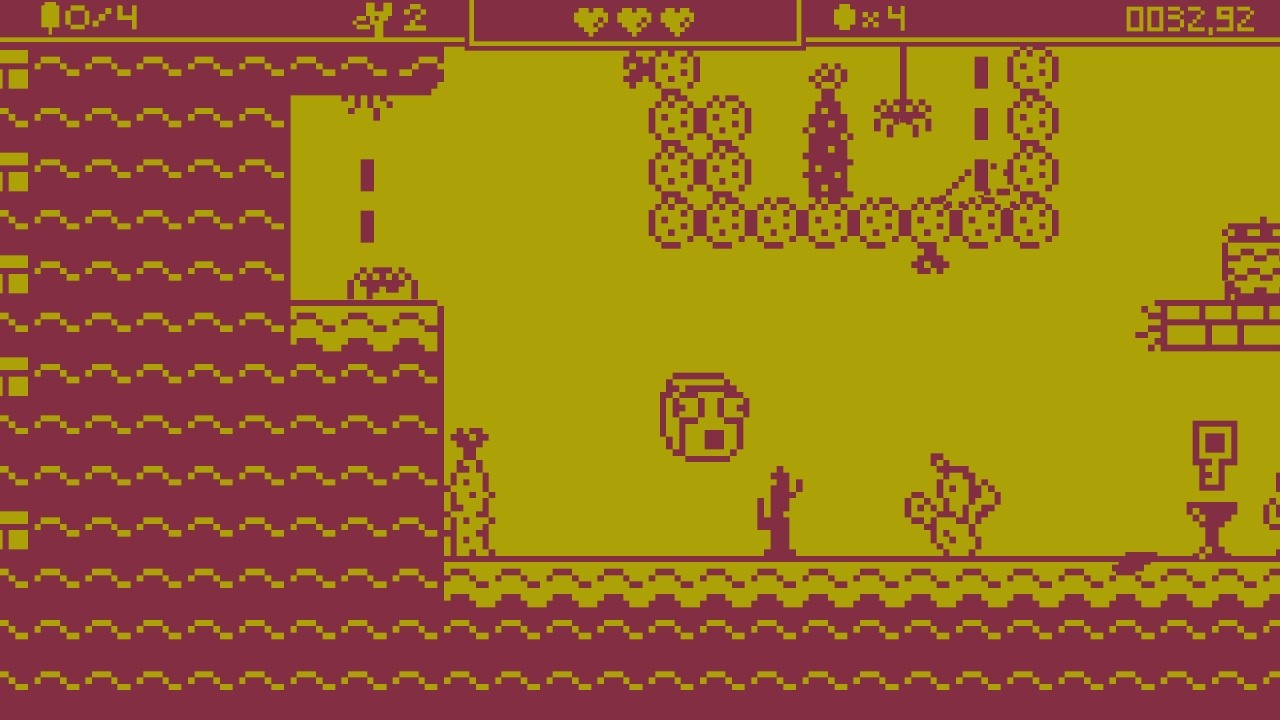 The plot seems simple enough, in that the titular character has something stolen from his lab by enemies and must retrieve it. The cut scene that plays out at the beginning is sweet and to the point, after which we’re dropped straight into the game. It’s nothing new or particularly elaborate, but it provides a backdrop for the platforming and a goal for the player, no matter how small.

As you progress through Pixboy you’ll journey through four different worlds – Forest, Desert, Snowland and Cyberspace – each with ten levels of their own, the four final levels being boss levels. It’s a concept explored in many platform games, the most famous examples being the Crash Bandicoot and Mario games, but Pixboy utilises it well. Each world has its own unique backgrounds, music, enemies and special features, all tailored to that specific world. Some platforming features are completely random but great fun and unique to Pixboy.

The levels in Pixboy get progressively harder, as with most platformers. A lot of this is down to the enemies, as they both grow in number and become more difficult to deal with as you progress. Some of them shoot arrows or fireballs, others jump around and are hard to avoid, and others suddenly drop from the ceiling when you pass underneath them. There are areas where various enemies are grouped together, and some quick thinking will be needed. While the enemies can be tricky they aren’t impossibly difficult, and thus the levels are taxing, but fun, mostly.

As for the platforming itself, it’s both incredibly addictive and, at times, presents a real test of skill and patience. Considering how simple Pixboy is on the surface, some levels are labyrinthine and sprawling with puzzles galore. You’ll be hunting for keys to unlock doors, figuring out switch puzzles and attempting again and again to safely cross many spiked pits. Pixboy himself is fairly easy to handle if a little sensitive at times, so finicky areas can be tough, but not completely unreasonable. 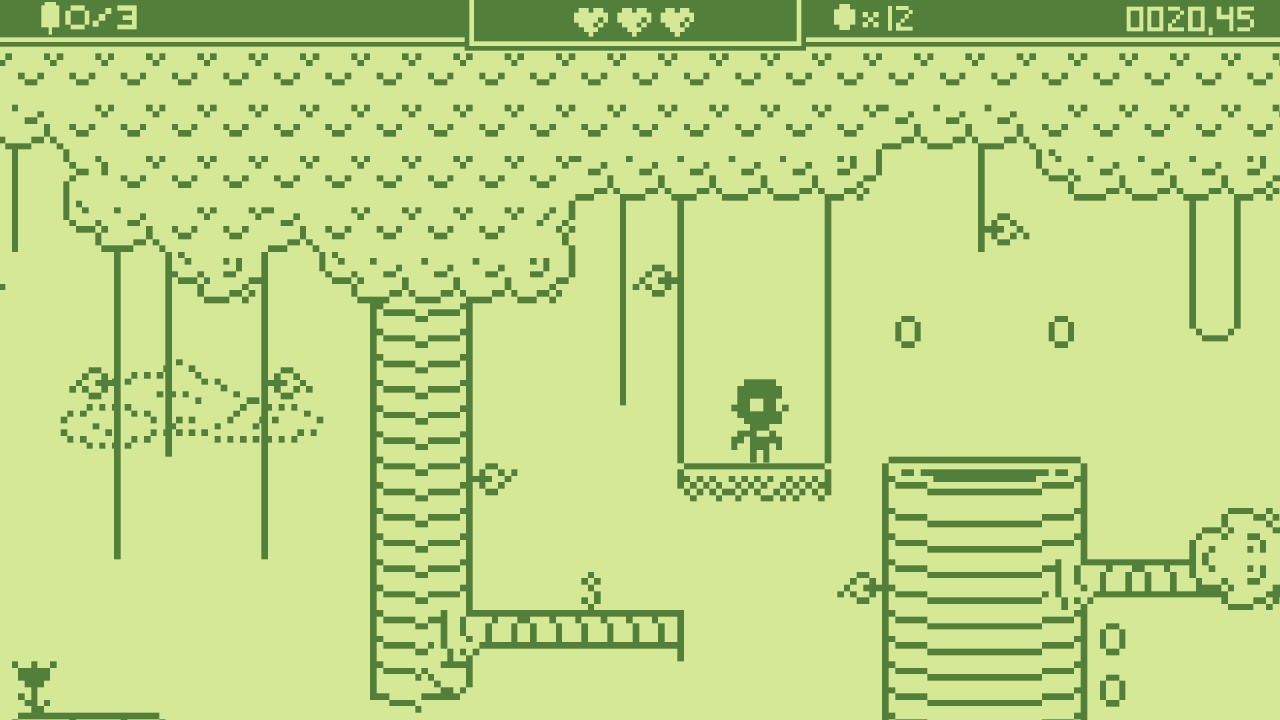 When you die, you’ll be taken either to the beginning, or to a flag (the game’s checkpoints) if you’ve already passed one. There are extra hearts dotted about the levels which can help you avoid the dreaded Game Over screen, but even the maximum of 7 hearts can prove too little when you’re at a particularly tricky point. Receiving multiple Game Overs on the same level can frustrate, and Pixboy certainly has the potential to make even the most experienced gamer rage quit.

The boss levels do break up the gameplay quite nicely, requiring you to speed run through a level as you’re chased by the big boss. You’re forced to think on your feet and be smart and fast, and while the levels aren’t too long, they are incredibly testing. There also isn’t any variation in the boss levels, so while they are challenging, it’s the same challenge over and over. Getting through them can be rewarding, however, particularly as it unlocks the next world.

Whether you’ve completed Pixboy or not, there’s the option to go back to any level and speed run through them. You can earn a crown on each level if you beat your time, and you can earn extra crowns for collecting every coin and every ice lolly if that’s your thing. It’s a great little feature that adds a huge helping of replay value to the game. There’s also the option to play every level without killing a single enemy in order to earn yourself the Pacifist Badge – a nice little nod to Undertale.

Overall, Pixboy is a real platforming treat that you’ll enjoy whether or not you’re an experienced gamer. Depending on how fast you play, you can get a few hours or a few days out of it, and there’s plenty of replay value thanks to the addictive platforming. It’s reminiscent of platformers like Super Mario Bros., Montezuma’s Revenge and even the more recent Celeste, so if you’re a fan of platforming in any capacity, you’ll find Pixboy worth the buy.

A retro platform title that will return you to the days of Super Mario Bros. Can you complete the levels and recover the stolen items?