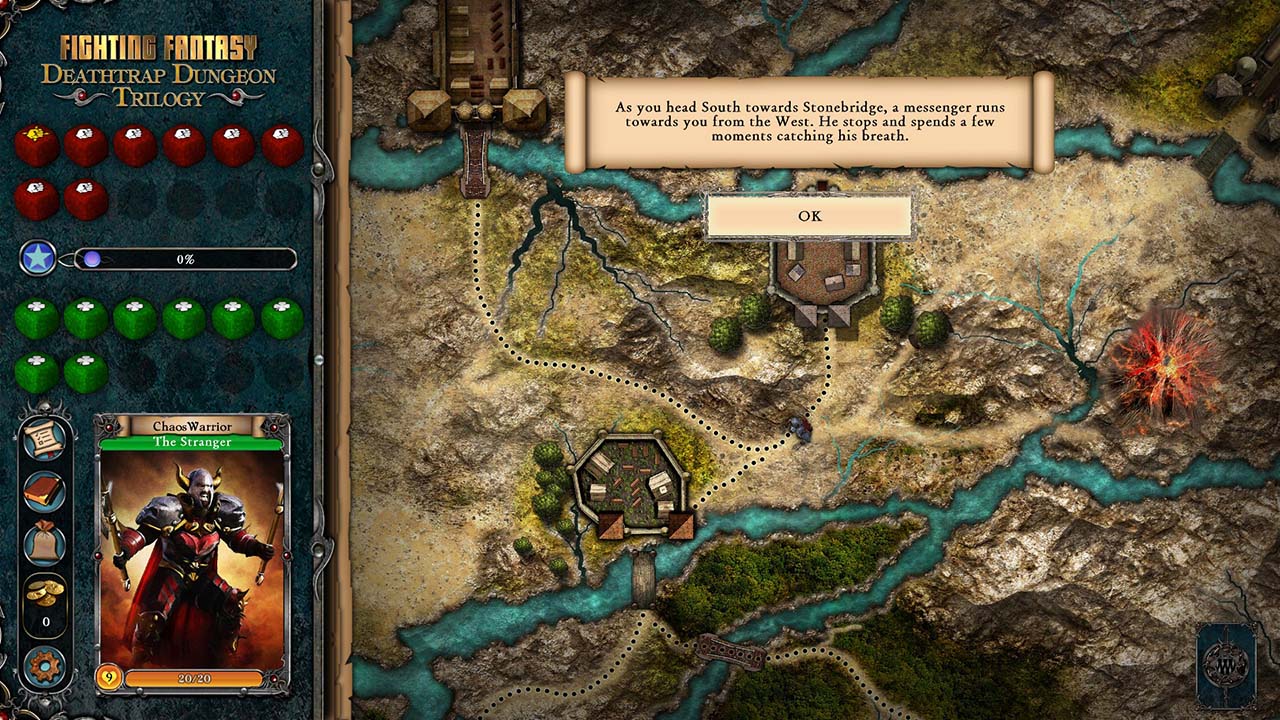 For gamers of a particular age and for me in particular, our first forays into the worlds of fantasy and adventuring came from between the pages of the Fighting Fantasy series of books. Created by Steve Jackson and Ian Livingstone, titles such as The Forest of Doom, Starship Traveller and The Warlock of Firetop Mountain provided a source of role-playing adventuring before the commonality of home console and PC gaming. Armed with a mighty pen, after all, the pen is mightier than the sword, a series of dice and a handy bookmark, us adventurers flicked through the pages of decision making, skill and luck; a core mechanic of role-playing that still lives to this day within the digital realms. In fact, the origins of modern role-playing can be found within these books and even their texts have been digitally remade or enhanced, the latest of which comes in the form of Nomad Games’ Deathtrap Dungeon Trilogy as it ventures a quest upon the Nintendo Switch.

For those unfamiliar with the Fighting Fantasy books, Deathtrap Dungeon was one of the first titles within its series; seeing a release in 1984 and later transitioning onto the Playstation One as an action adventure in a digital format. This newer iteration of its roots harks back to its original design by following a narrative, relying on skill and the luck of the roll from a series of dice, as well as making key decisions on how to advance through the puzzles and monster-laden corridors of the fiendishly designed dungeon. However, to bring a touch of modernity to the proceedings, this trilogy also incorporates a few new additions, such as watching the action unfold as you read through the narrative, a selection of adventurers to take forth and last, but not least, two additional adventures that base themselves on the original dungeon, but adds more content and a variety of ways to play them.

First and foremost though, the original adventure of Deathtrap Dungeon is your first port of call within this trilogy. The other two variations, Trial of Champions and Armies of Death remained locked until you beat the first story. It plays in a very similar way to the Fighting Fantasy books of old with you reading a bite-sized narrative to set the scene and depending on its content, you make decisions regarding your actions, whether it be walking in a particular direction, opening a chest or exploring a location to testing your luck and skill through the rolling of dice to determine your fate. The dungeon itself is filled to the brim with dangers from monsters to traps and with its element of luck in the dice, is also an adventure that you’ll undoubtedly fail time and time again. However, the more you learn and the more you venture, the better your chances of survival. 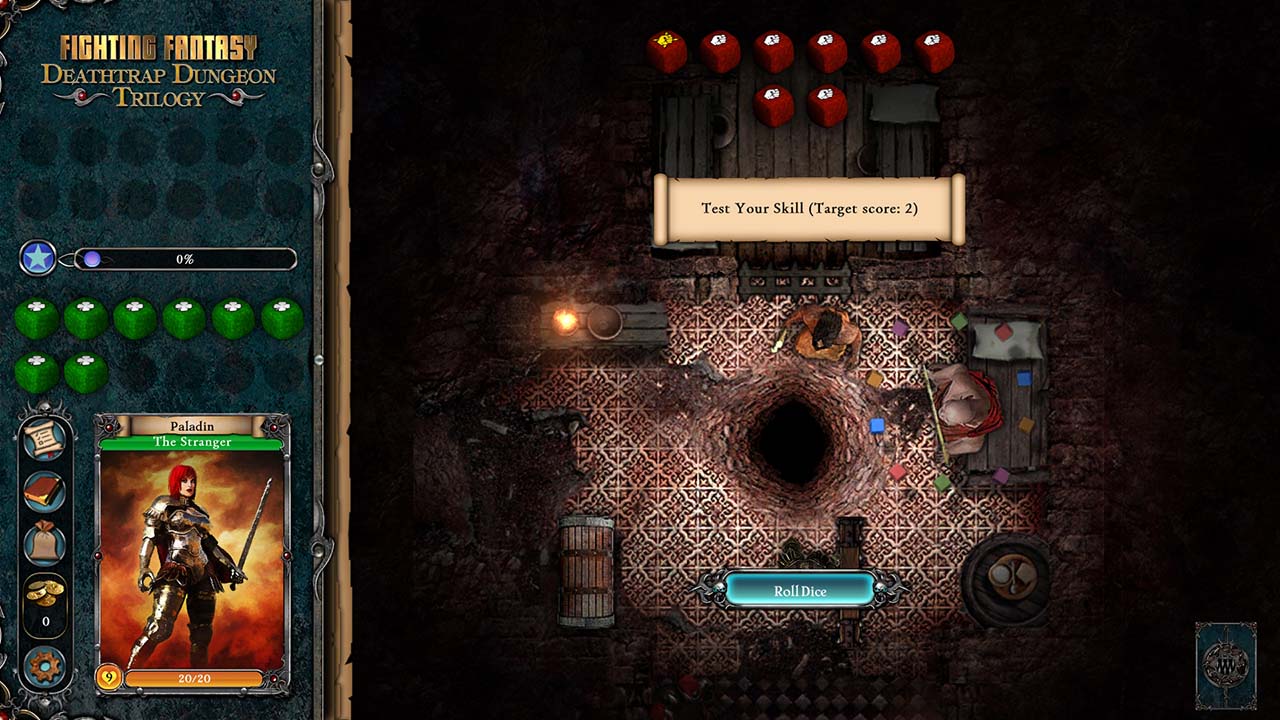 The main presentation of the game comes in a variety of elements. Firstly, the narrative is driven through a series of bite-sized paragraphs, often with them ending with a choice. This is further enhanced with a top-down view of your character as he advances through the dungeon. In terms of graphical presentations, there’s nothing mind-blowing here, but its simplicity serves its purpose well and helps bring the text to life. Your options of decision making are also displayed upon this top-down perspective through a series of boxes that can be selected to determine your choices. One area where the original books excelled, were in their impressive artworks that helped to shape the visuals of its subject through the mind’s eye. Sadly, these haven’t transitioned over to this digital recreation, but watching the action unfold in real-time before your eyes as you read the text offers a nice and effective alternative.

Depending on your choices, you can come across good fortune and find useful items, or run into bad luck and spring traps or come across monsters; both of the latter which execute a dice rolling mechanic to determine your fate. This is turn introduces further elements into the gameplay. Finding items is presented in a CCG-style format that allows you to select specific cards for certain situations. For example, need to climb to higher ledge, then if you’ve found one, you can use select a rope card to use it for climbing. Weapons also come in a variety of cards and can be selected for your chosen armament. However, there are also many instances where the luck of the die come into play. Opening certain chests or combat is presented in this way using two sets of coloured dice: green or red. 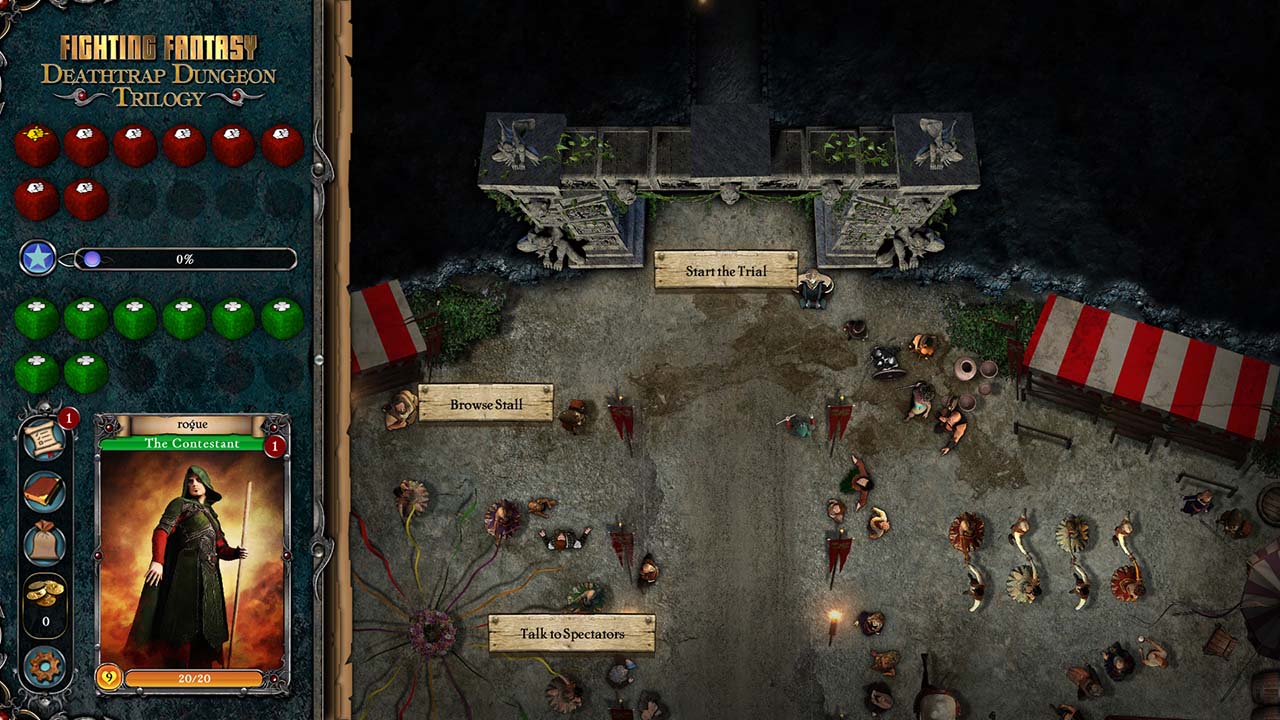 Whatever task is facing you, the game presents you with a scenario that needs to matched or beaten. For example, roll two or more icons that are displayed on the dice, then you win the scenarios and are successful in opening the chest (green) or defeating the monster (red). Roll too many blank dice and don’t meet the requirements needed to win and you can spring a trap or face certain doom. One of the frustrations of the original books, was the random nature of its design and the very real of prospect of failure just around the corner. The same applies here too, but the developers have tried to help even up the playing field by introducing a ‘lives’ system to give your adventurer a second chance, as well as a system that allows you to upgrade your dice and present you with a better chance of luck and skill when it comes to starting a new adventure through the dungeon.

This promotes a form of longevity and replayability as you develop and grow stronger with each new journey you make. This is also further enhanced with a series of multiple pathways and endings, ensuring that no two playthrough are always the same. Add to this the two further extensions of the Trials and Armies adventures and you have a game that will certainly last over the long term. Should you reach the ending of the original Deathtrap Dungeon, you then unlock the further two adventures that await you. At their cores, the gameplay remains largely the same, but with added content, new routes and traps, you are guaranteed a whole new adventure. The Armies of Death though, brings an extra mix to the scenario that focuses on legions rather than a sole hero and adjusts the game’s scenarios and rules to bring a fresh take to the adventure.

Overall, Deathtrap Dungeon Trilogy brings a faithful recreation of the original concept from the Fighting Fantasy series of books. If, like me, you spent your youth within their pages, then you’ll find a lot to love here with this digital recreation. However, even if you’ve never set foot within its pages, this is still a game that holds a high value of entertainment. It’s also a perfect fit for a casual experience and with its mixture of narrative descriptives and real-time depictions, creates a relaxing, yet exciting game to indulge in; even if it does frustrate with its random nature of deaths and failures. The more you play though, the stronger you become; something that the original books were never able to achieve. With its trilogy of content, series of heroes and multiple branches, there’s a lot of gameplay for your money here and is a game that is guaranteed to last over the long-term. There’s something special about revisiting the role-playing quests of a time gone by and within the labyrinth of corridors within the Deathtrap Dungeon, you’ll be sure to find an adventure that’s worth venturing for.

Revisit the Fighting Fantasy quests of old within the Deathtrap Dungeon Trilogy.