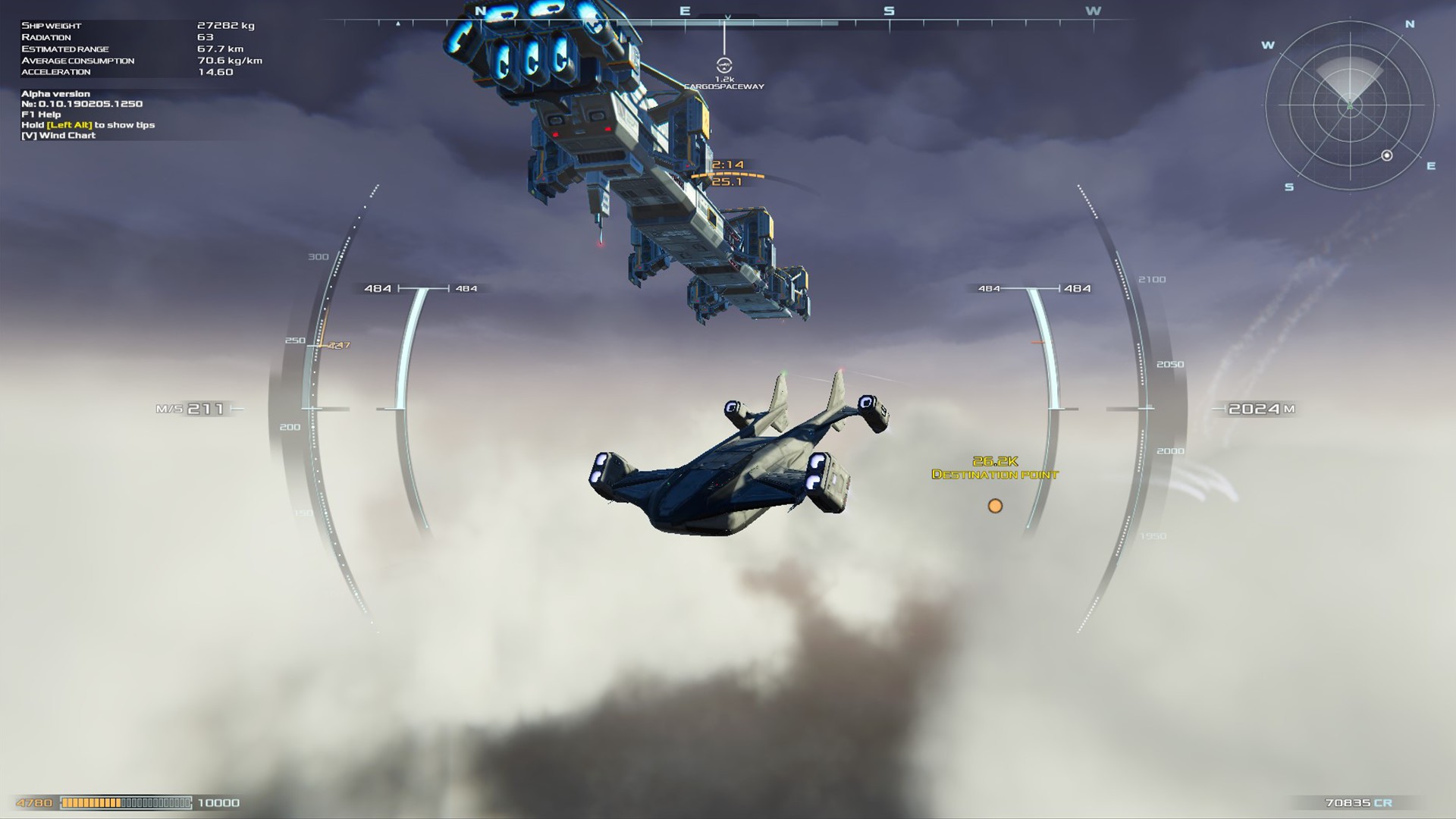 In essence, Frontier Pilot Simulator is all about going between different settlements and bases across a frontier world delivering goods and escorting passengers. The game provides a simple way to quickly check, via the map, what goods are available where, where they are needed, what they cost, and how much they’ll sell for. That’s pretty much all you need. Likewise, you can also see any available ship upgrades on different places, as well as passengers waiting for you to pick them up.

There is certainly a bit of grind involved, as you repeat the same gameplay over and over, but the enjoyment it provides stems from the actual flying. There are currently 3 ships available, and this includes a VTOL and plane mode. Each ship behaves differently, especially if you are to compare both flying modes. The weight of each ship, as well as the cargo you carry, heavily affects how ships handle, how much battery charge your ship consumes, which ends up adding a whole new layer of complexity and challenge to what would otherwise be just a regular fetch quest system. On top of that, you also have to take into account a dynamic weather system, drag, inertia, wind currents, volcanoes, geysers, and all sorts of natural hazards. 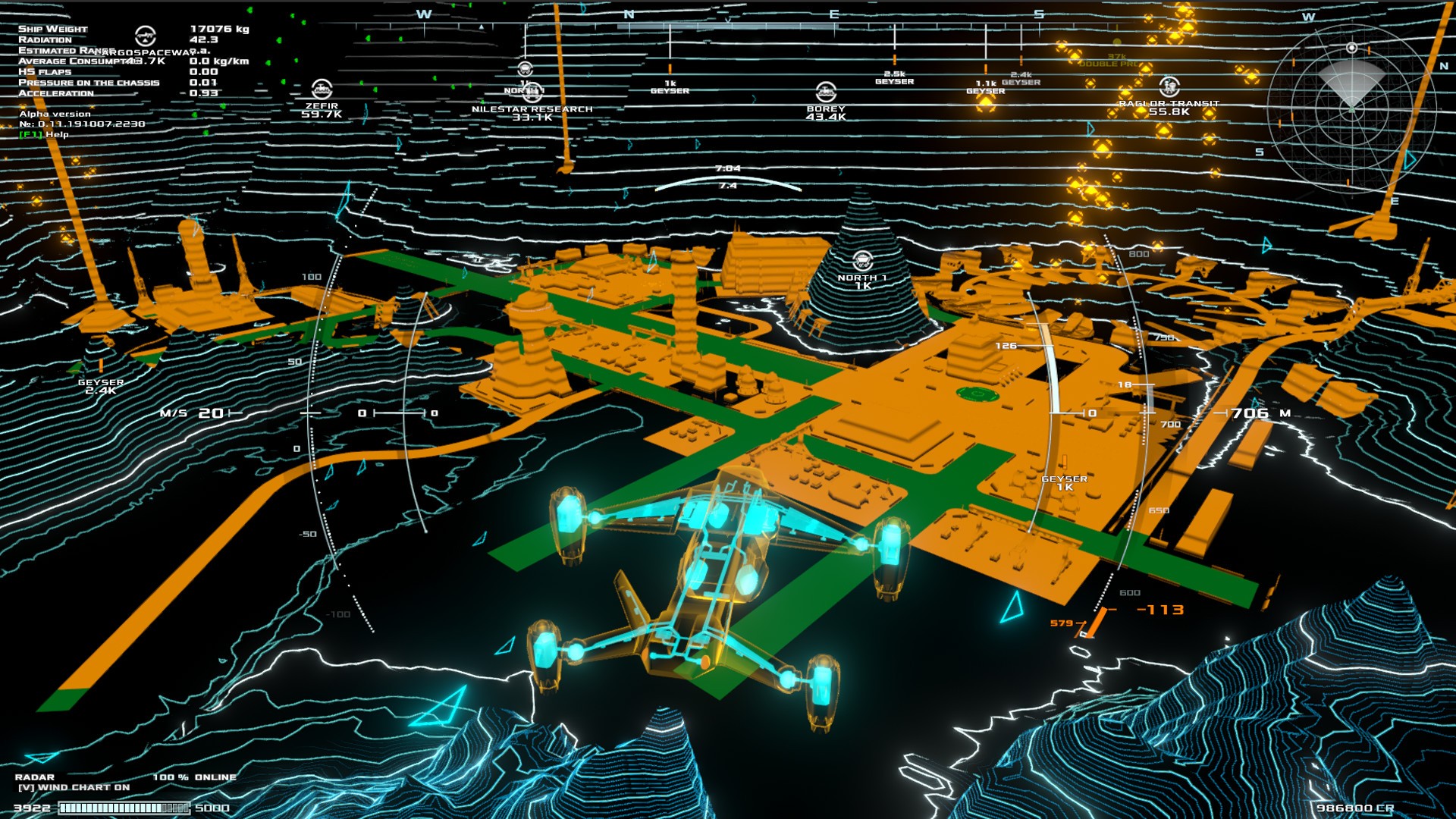 While the premise is certainly captivating, it quickly becomes apparent that the game could still use a lot of work and polish. For starters, the UI can feel like it has a lot of clutter at first, but after a few minutes, you’ll realize that everything has a purpose, and you quickly adapt to it. Still, having the option to hide some of it, like having a toggle button or being able to make it show up with the press of a button would probably alleviate the problem.

Another big problem that Frontier Pilot Simulator seems to have is its performance, which from what I’ve read, it seems to have always been a problem, and many people don’t seem to understand how it is possible, given that the game doesn’t really look particularly demanding in terms of graphics. Don’t get me wrong, it’s not that the game is unplayable, because it most certainly is not, but barely getting over 50 frames per second when I should run the game fine, at least according to the recommended system specifications on Steam, is somewhat mind-boggling. Better performance would certainly be most welcome, but the game plays decently as is.

Then there’s also what is probably one of the biggest issues that Frontier Pilot Simulator has, and that’s the fact that it doesn’t tell you how saves work. Having assumed that it automatically saves your progress when you land or complete a delivery, I’ve run into instances where next time I’d load the game, I’d get a message saying that my ship had crashed and that I had been deducted some credits in order to cover the expenses of the insurance.

If the whole save system doesn’t concern you that much, things get a whole lot more complicated once you start getting into story quests. If you happen to crash while carrying cargo, or a passenger, that is required to complete a quest, the passenger dies, and if that cargo happens to stay somewhere inaccessible, like in the water, then you’re out of luck. If something like that happens, you’re no longer able to complete the game’s questline. I’ve seen someone else on the forum reporting the same issue back in late 2018, and the developer provided no response in regards to this. This is seriously frustrating because if you want to play the game’s story quests, you have to start from scratch. This just strikes me as a really odd design decision. Also, other than waypoints, there’s just no way to keep track of what quests are active, which ones you’ve completed or anything of the sorts. 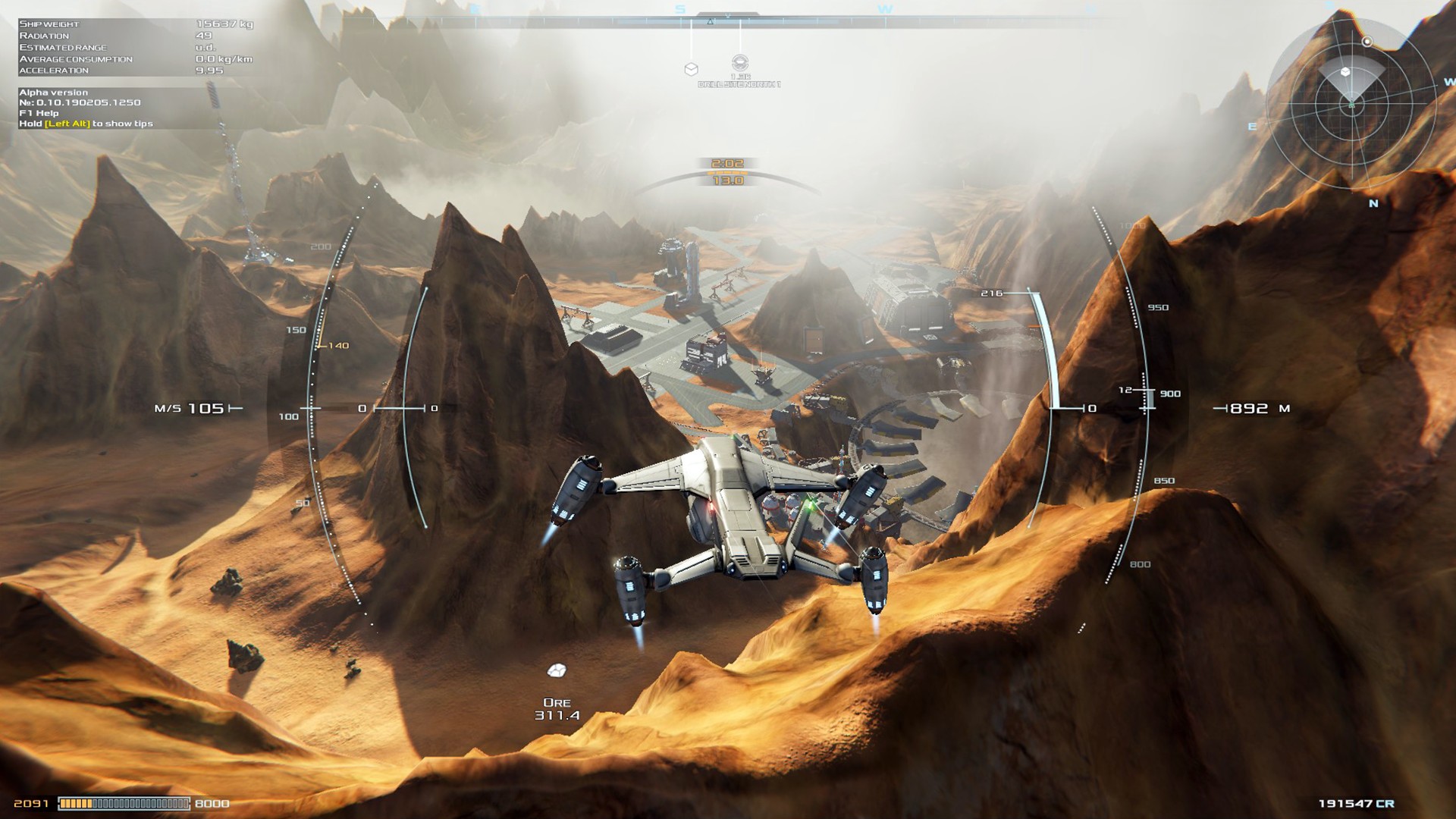 If you manage to follow through with the questline, you’re supposedly able to help build new bases, which I imagine does make things more engaging, since each base is placed in unique locations. However, I never reached such a point, as I ended up getting way too frustrated with the issues that I’ve run into, and so I decided to step back from the game for now.

If you’re into flying simulators, Frontier Pilot does provide a fresh spin on the formula, but as always, you have to keep in mind that the game is in Early Access. Sure, that isn’t an excuse for everything, but the game is being improved, slowly but steadily. There’s nothing more satisfying than perfectly landing your ship in the runway, facing the exact direction it is supposed to face, without running into any bumps as you make your descent. I find that when everything works out fine, the game shines in the simplest of moments.

With that said, when everything goes your way, the game is certainly a lot of fun, albeit a bit grindy. Nonetheless, I’m honestly not sure if I’d recommend the game in its state, and at the current price. The number of issues it has, like failing quests making them gone forever, physics issues with props when loading your game, weird graphical glitches related to lighting that make it difficult for you to see, just seem to ruin the fun for me. It is possible that you can play for hours without running into any issues, and then you run into some problem, like failing a quest, and all the fun just gets thrown right out of the window. If you’re hesitant, and I honestly would be in most people’s cases, I’d say that your best bet is to wait for more updates, and closer to the full release, then maybe check back again.