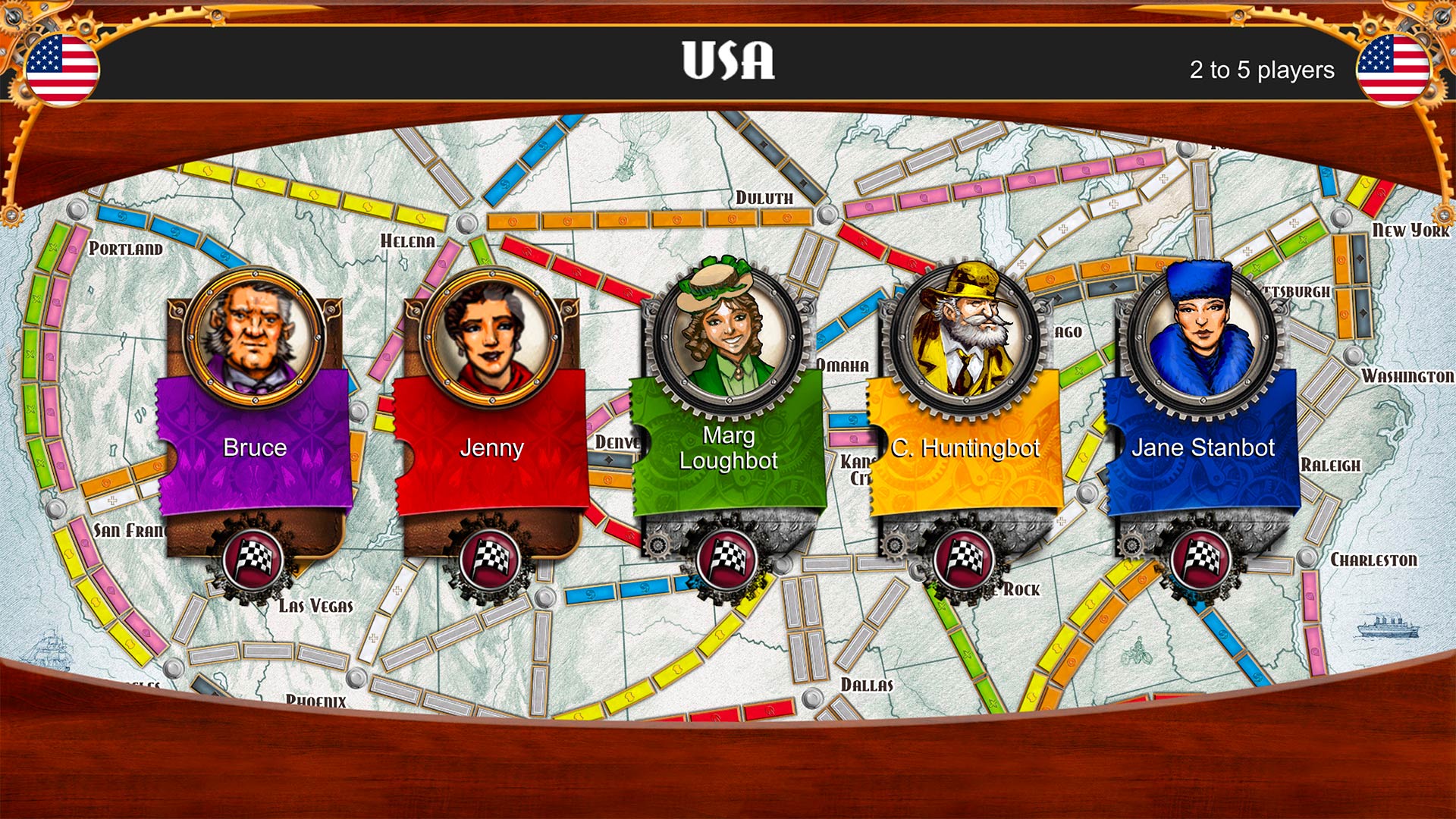 Ticket to Ride developed by Next Level Games and Days of Wonder. A turn based strategy game where players pit their wits against one another to successfully connect stations along real life locations. The base game allows for only 1 map the USA. Multiple expansions are available, and can be purchased as a season pass, or as an individual map. Originally this German based Railway board game which was created by Alan R. Moon, was evolved to be played as a browser game in 2004, as the game increased in popularity, Days of Wonder decided to expand its platforms. More recently being released on Gamepass for both Xbox One and PC.

I’ve had the pleasure to play; the board game, IOS, PC and Xbox One version. All remain true to the original gameplay, each has its advantages over the other, and the purists in the world of board games will argue that the superior way to play is around a table with family and friends. I agree with this, as in its current build I was unable to play anything other than single player on the Gamepass version, this lack of multiplayer really lets the Xbox One version down.

A simple strategy game which allows you to either concentrate on your own missions, or spend your time trying to ruin other players’ games by blocking their paths. The premise is to select several route tickets, and then take coloured train cards from the pile, each route between a station is separated by spaces that vary from 1 to 6 coach lengths, which can only be filled with a certain colour. Each person takes it in turn to either place down their trains on their route, or they select cards from the pile. As you become more experienced you are aware of the paths available to you, because of this you can either play fair, or you can be sneaky and undermine your opponent’s strategy. I’ve lost many an hour of my life to this game. With varied approaches available to win a round it allows for multiple tactical choices. 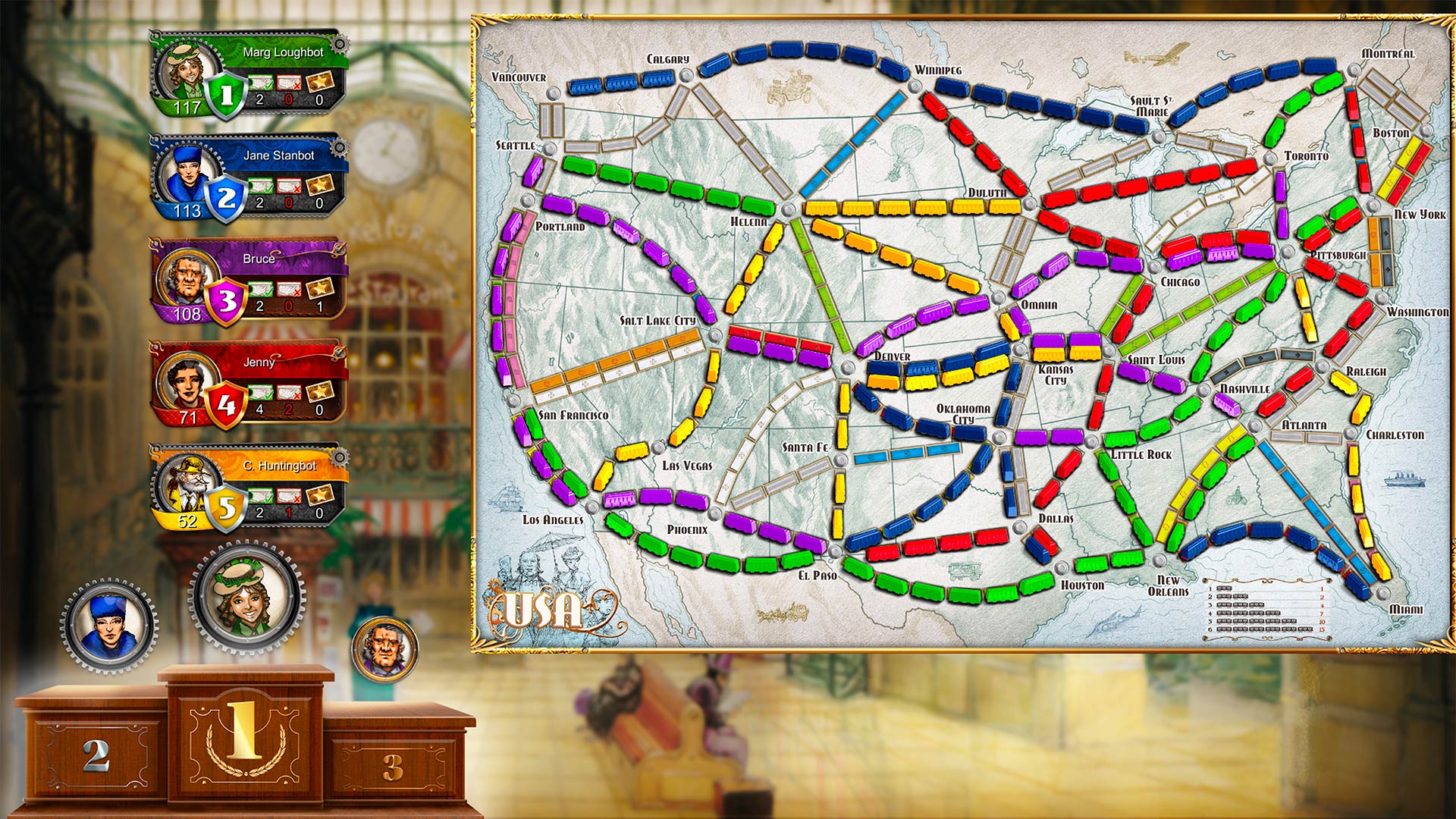 The restriction of only single player against up to 4 AI opponents really surprised me, it’s still enjoyable, you still get to explore all the different strategy elements, but it eliminates that competitive edge against friends. That feeling on Christmas day when you all sit around to upset one another when playing Monopoly. You all want to be the top dog no matter what the cost, and you all resent the person who eventually gets to enjoy that mantle.

I’ve so far given an overview which explains the origins and how the game expanded across different platforms, for the rest of this review I’m going to focus primarily on the Xbox One version in its current build. When I look at PC ports to console I’ve come to expect an issue with the UI. Usually there is a clumsy submenu system which allows you full access to everything on offer. Ticket to Ride is an exception to this rule for the most part. A well mapped out control system allows for relatively easy navigation throughout each playthrough, the only stumbling block is when you try to select routes in close proximity to one another. It confuses itself, and keeps jumping from an incorrect position to an incorrect position, after some careful perseverance you do succeed.

The image of the board, and the colour palette implemented on screen is an exact match to the original, crisp lines and clearly highlighted targets make the action easy to follow. Though the graphics are basic in comparison to high end titles, it is more than sufficient here, I’d say anything more than is offered would be a waste, and would also take away from the traditional feel.

When you first load into the game you are welcomed by rather delightful western cowboy Saloon music. This helps set the scene, the music style continues throughout the game where a relaxed guitar and harmonica combination gently play in the background as you plan your next move. The developers did a great job with the audio, delightful classic train horns blow at opportune moments, the feeling of a classic Railway oozes out of every pore. 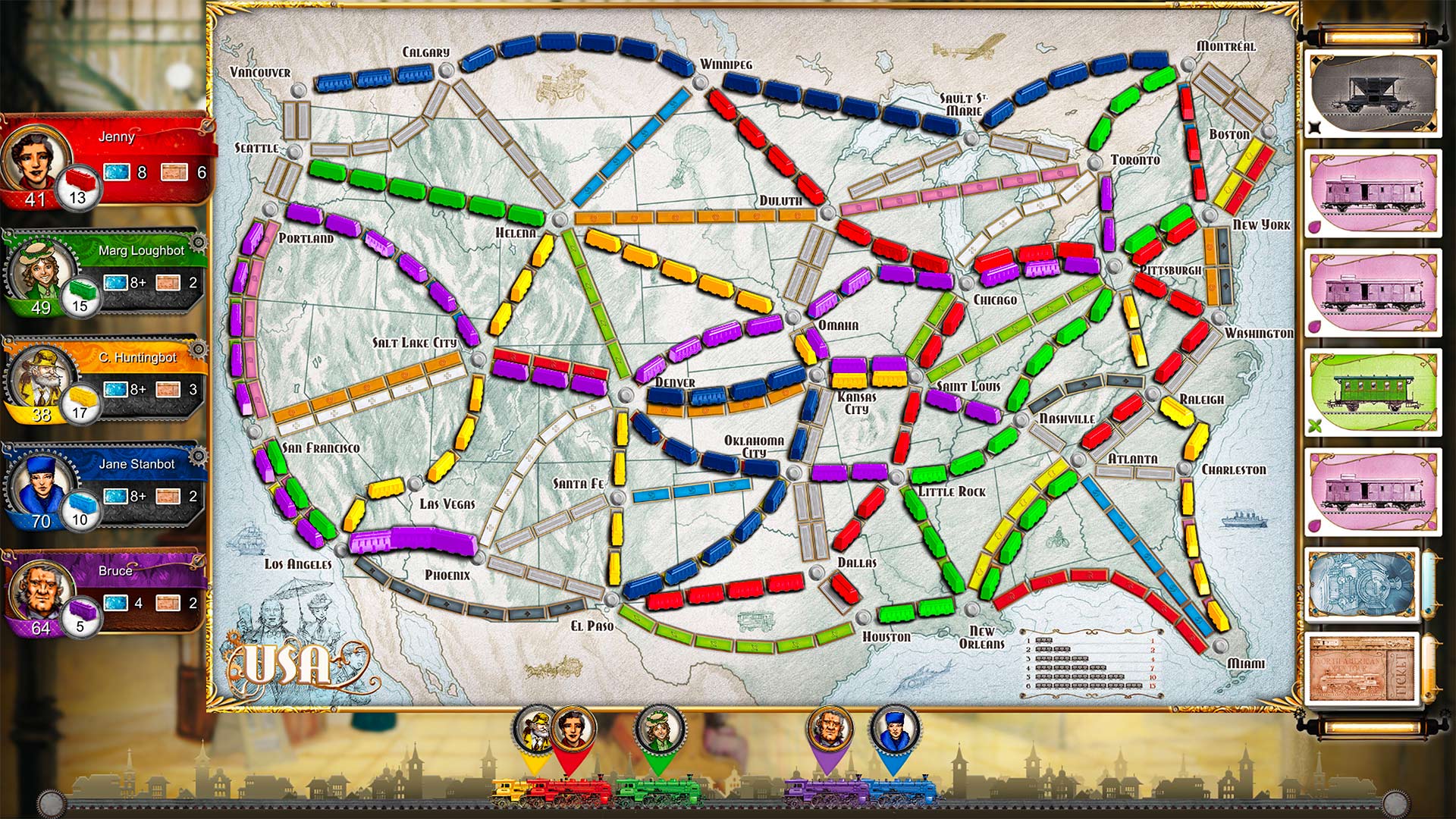 When I look at a strategy game I’m always curious as to whether I will be hooked into wanting to play again, I’ve previously stated that I’ve sunk many an hour into playing TtR, but that was mostly comprised of the board game and the iOS title, they allow me to battle other people. The Xbox One cover holds many of the great aspects of both the other versions, but it is missing the key component, and that’s the ability to play with friends. I do worry that if Days of Wonder fail to add this additional game mode then it will fail to achieve the heights it deserves. Don’t get me wrong, the achievements side of the game has much variation, and this will keep players coming back for more, but what is the use of creating a genius plan if its only the AI that you are laughing at.

With such a great pedigree, and an obvious family favourite I believe the developers have currently missed out on reaching its full potential on Xbox One. I hope that in the coming months they update the current build and allow players to enjoy every aspect. With only one level available as part of the basic package I’d say you could also tire of this quite quickly, so potentially you will have to invest some money to expand your options, but as it is currently available on Gamepass this isn’t going to break the bank. I absolutely adore Ticket to Ride, I believe the developers have done a fantastic job of porting it from PC. Minus the few key drawbacks I’d certainly recommend it, currently free to play you have absolutely nothing to lose, and hopefully with time the game modes will only increase, making for a more varied and exciting experience.

Alan R. Moon’s classic Railway board game Ticket to Ride brought to life on Xbox One. Can you plan your strategy well enough to defeat your opponents? Play fair or play dirty, either way you must play to win!