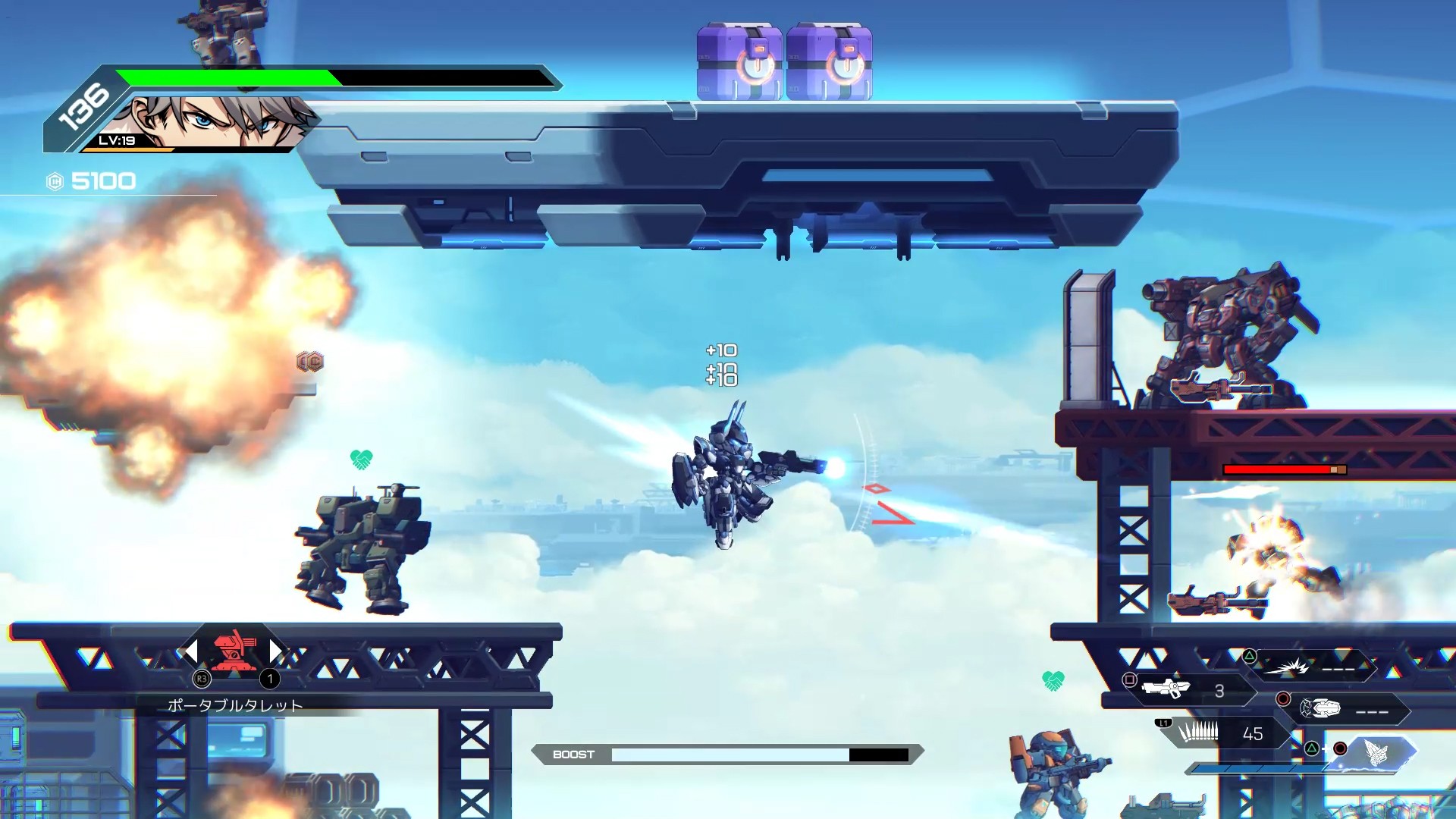 Whether intentional or not, RocketPunch’s utterly gorgeous and often excellent Hardcore Mecha feels every inch the spiritual successor to the Super Nintendo’s host of brilliant, but largely forgotten, side-scrolling mech games. Whether you have fond memories of the US-only, Mech Warrior, the still fantastic Cybernator (known as Assault Suits Valken in its native Japan) or even the Mega Drive’s own, Target Earth, Hardcore Mecha will likely scratch an itch you might not have even known you had.

I certainly didn’t – I wasn’t sitting at home dreaming of a 2D side-scrolling mech game, but hey, here it is, and well, it’s fantastic. Heck, even if you’re not into mech games, Hardcore Mecha has been made with such a refined sense of glee that, fan of the genre or not, it’s hard not to be won over by its stunning 2D visuals, tight gameplay and inherently outrageous Japaneseness.

And man, isn’t this game just so incredibly Japanese. From the anime inspired visuals and high speed action to the overly dramatic, classically overblown storytelling, Hardcore Mecha couldn’t come from anywhere else but Japan……except that it actually comes from China. As strange as that might be, the team at RocketPunch have done an exemplary job of capturing the quintisential Japaneseness of this type of game while successfully imbuing it with the kind of top-tier anime visuals that helped Hardcore Mecha stand out from its 16-bit predecessors. 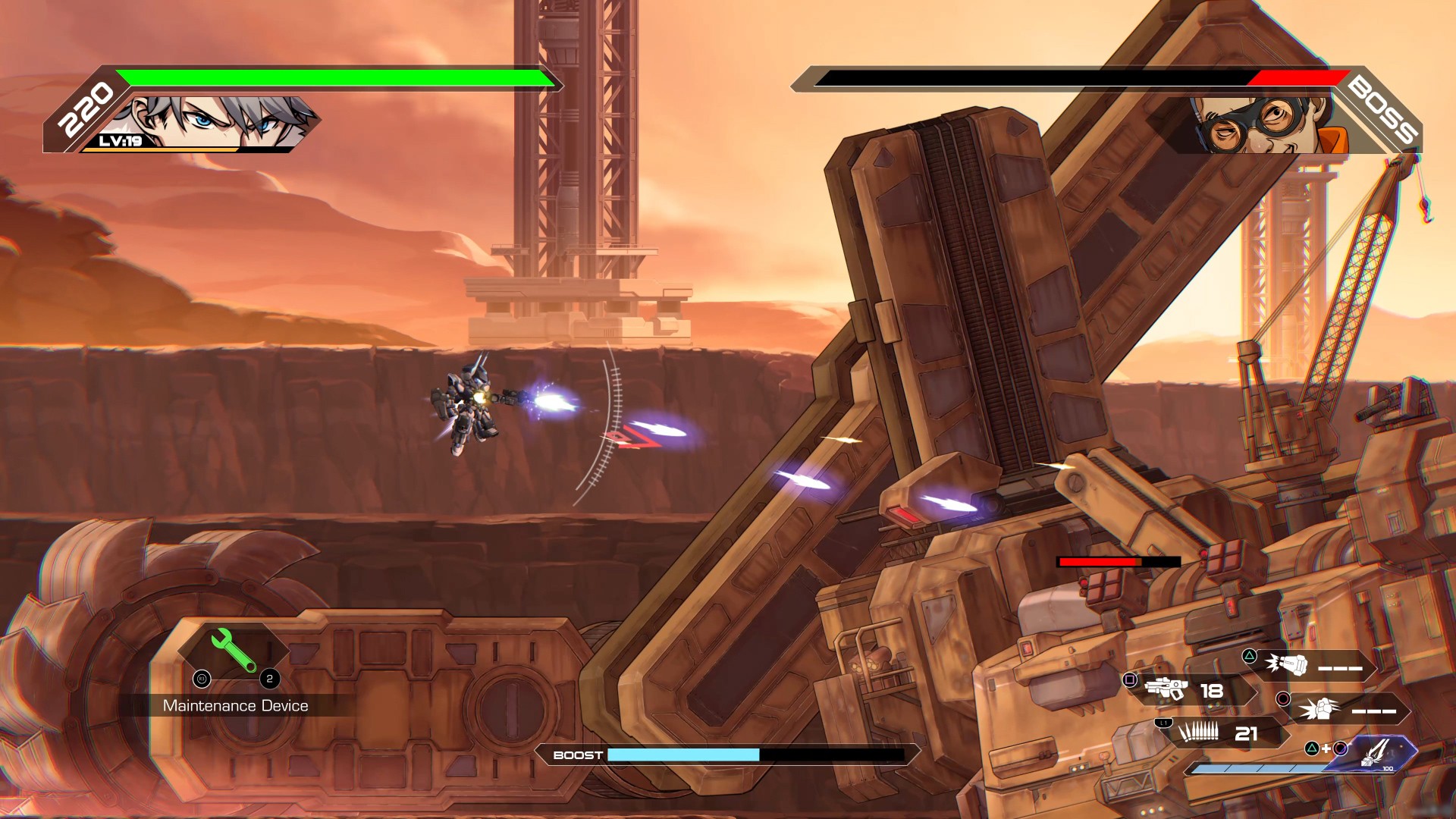 Other than those visuals though, beyond the upgrade system and slightly more varied selection of offensive options, this really does feel like a 16-bit game made in 2019/2020. That’s no bad thing of course, and the purity of the gameplay is one of Hardcore Mecha’s most positive aspects – just be warned that, despite a handful of modern refinements and an admittedly gorgeous coat of hi-def paint, this is a resolutely retro throwback experience, one looking to refine rather than revolutionise.

Again though, for many (myself included), that would be the preferred approach, one that has led to an experience that feels simultaneously retro and downright cutting edge (thanks largely to those genuinely gorgeous visuals). The focus throughout here is clear, and in my opinion, the game is all the better for it. It might not be an especially long game and RocketPunch makes no great effort to add unnecessary padding (something that I appreciate more and more these days), but thanks to its solid suite of upgradeable abilities and unlockable weaponry, the game does provide plenty of reasons to come back once you’ve finished the core campaign. Beyond the higher difficulty settings, the game also includes a surprisingly useful training mode and an enjoyable, if somewhat brief, Simulation mode that works as a basic enemy wave challenge for those looking to test their skills.

As for those skills, well, they will be tested. The game itself isn’t the most challenging of its ilk, and despite the visually impressive boss battles, many can be breezed through on the standard difficulty setting. Things obviously get trickier if you turn up the difficulty, but honestly, most of the challenge comes primarily from the slightly awkward control scheme. It allows for an array of unique movements and weapon options, but I honestly can’t remember the last game that had me pressing the wrong button as often as I did here. Whether it be the using the wrong weapon or blocking when I wanted to speed boost, it took me a surprisingly long time to get my head (and my fingers) around the games’ oddly confusing control scheme. 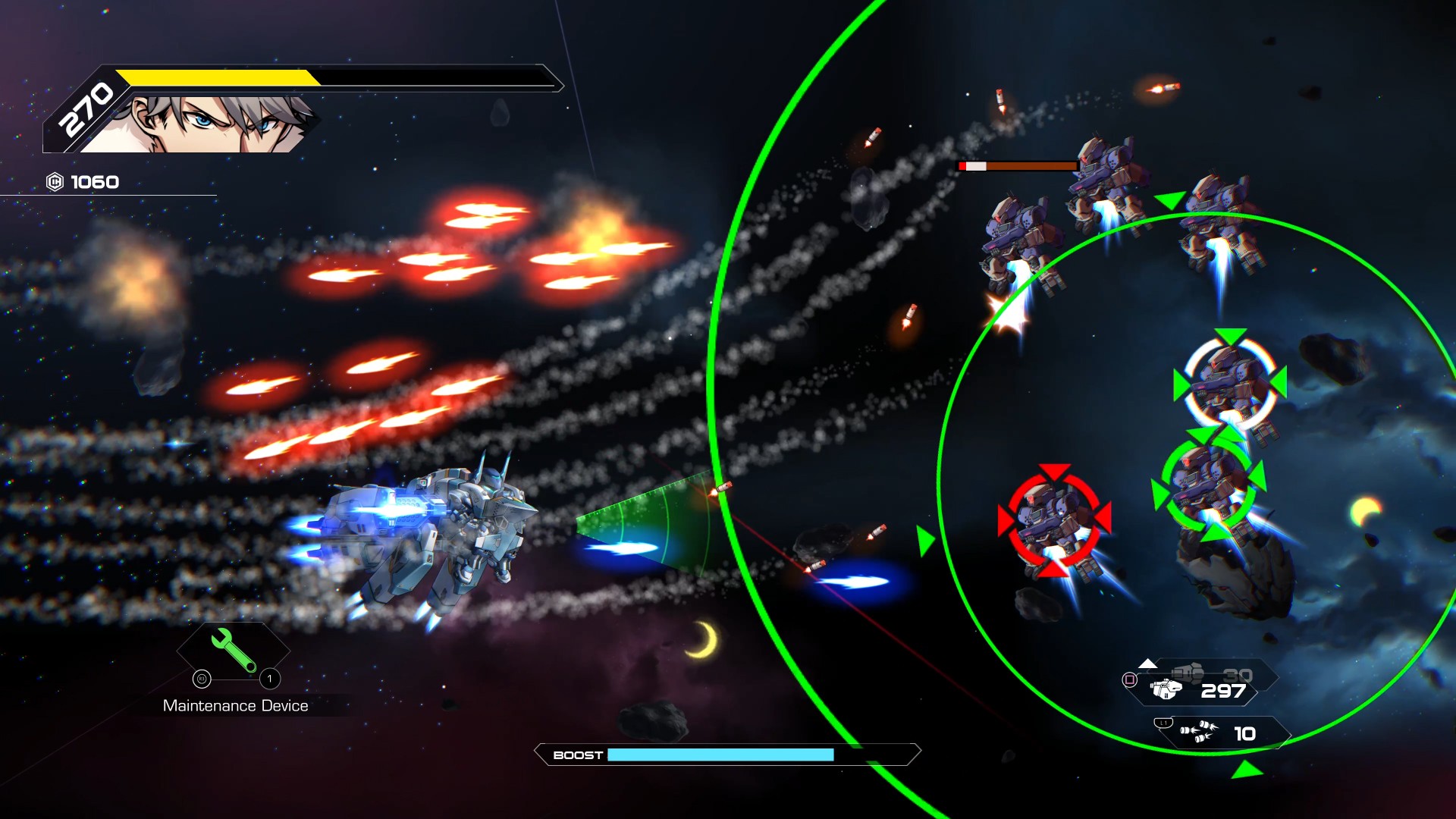 When you do though, Hardcore Mecha really does allow for a varied and potentially high level approach to battle. Via simple combos linked to the cool down attached to each attack, managing your abilities and boosts becomes a massive part of the experience. It’s tricky at first (and occasionally infuriating), but once you get your head around it, blasting and charging your way successfully through a level becomes hugely rewarding.

As for the levels themselves, they are surprisingly diverse and almost all beautiful to look at. The real looker though are the mecha themselves. Based primarily on the chibi model kits made famous by Gundam, the mecha, while undoubtedly familiar in design, absolutely jump off the screen, and when witnessed in conjunction with some of the games’ more outlandish visual flourishes – the Ultimate Moves and boss battles are particularly brilliant – combine to create one of the better looking anime-inspired video games in recent years.

With its surprisingly robust gameplay, host of effective pick-ups and smart level design, RocketPunch’s, Hardcore Mecha is undoubtedly a cut above your standard retro-inspired action game. The control scheme might be a tad fiddly, the story, while fun enough, is ultimately forgettable, and in terms of core content, it’s hardly the longest game in the world, but thanks to its gorgeous visuals, in-depth upgrade system and surprisingly varied mechanics, Hardcore Mecha manages to overcome its shortcomings to deliver one of the finest mech games for quite some time.

With its surprisingly robust gameplay, host of effective pick-ups and smart level design, RocketPunch’s, Hardcore Mecha is undoubtedly a cut above your standard retro-inspired action game.