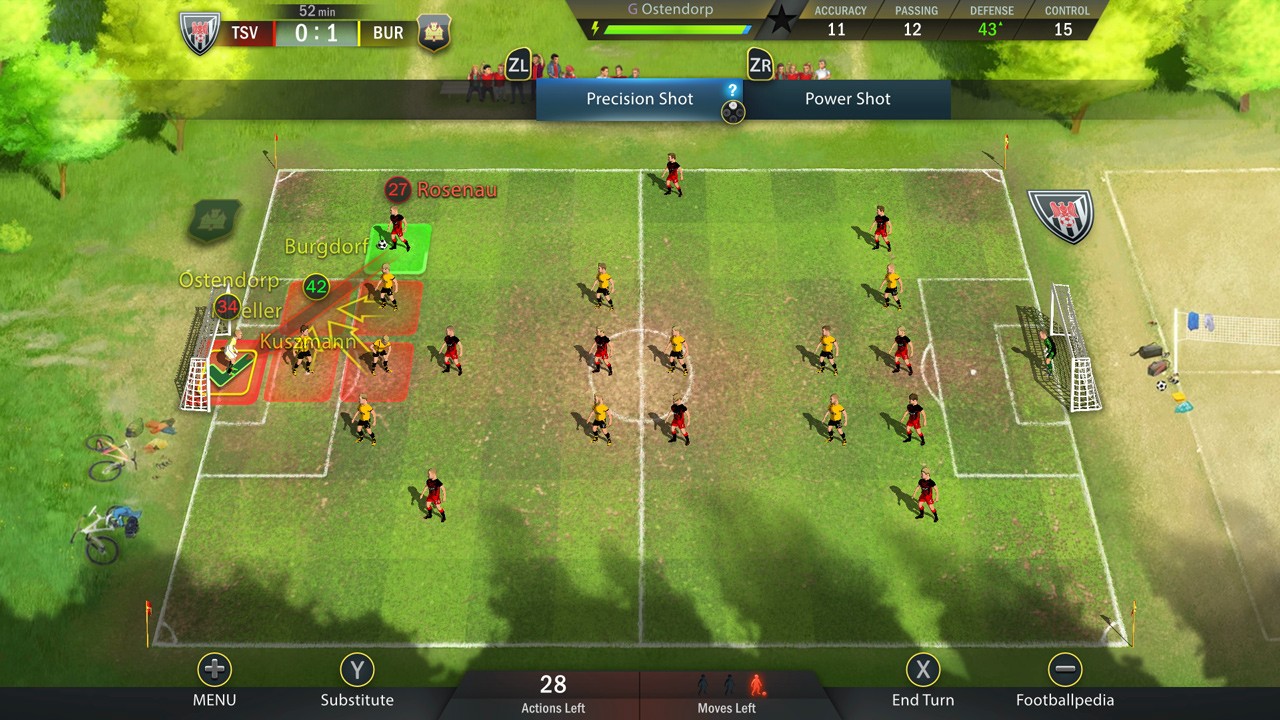 I’m a huge football fan and back in my university days I used spend far too much time playing FIFA/PES with my friends, I also spent far too much time playing the time sucking Football Manager series. Two very addictive games covering the same sport, whilst FIFA can also be described as a sports action game, Football Manager is more of a sports turn-based strategy title. There have been a few attempts of combining the two, the general issue being both elements can be time consuming. Football, Tactics & Glory attempts to join up the high octane feeling when playing football with the tactical thinking of a football management simulation.

Football, Tactics & Glory is a turn-based football simulation. Imagine a much simplified Football Manager game when you pick the team, make transfers and organise training and mix that with something that looks like a turn based Sensible Soccer. Football, Tactics & Glory doesn’t have any official licenses, but that doesn’t make it any less interesting or fun. At the beginning Football, Tactics & Glory throws you straight into a game, something reminiscent of EA titles, it’s works quite well introducing you to some of the simpler interactions required to progress. There’s actually a bit of a plot opener, as you get injured in the game and then that starts you off on your career as a manager. 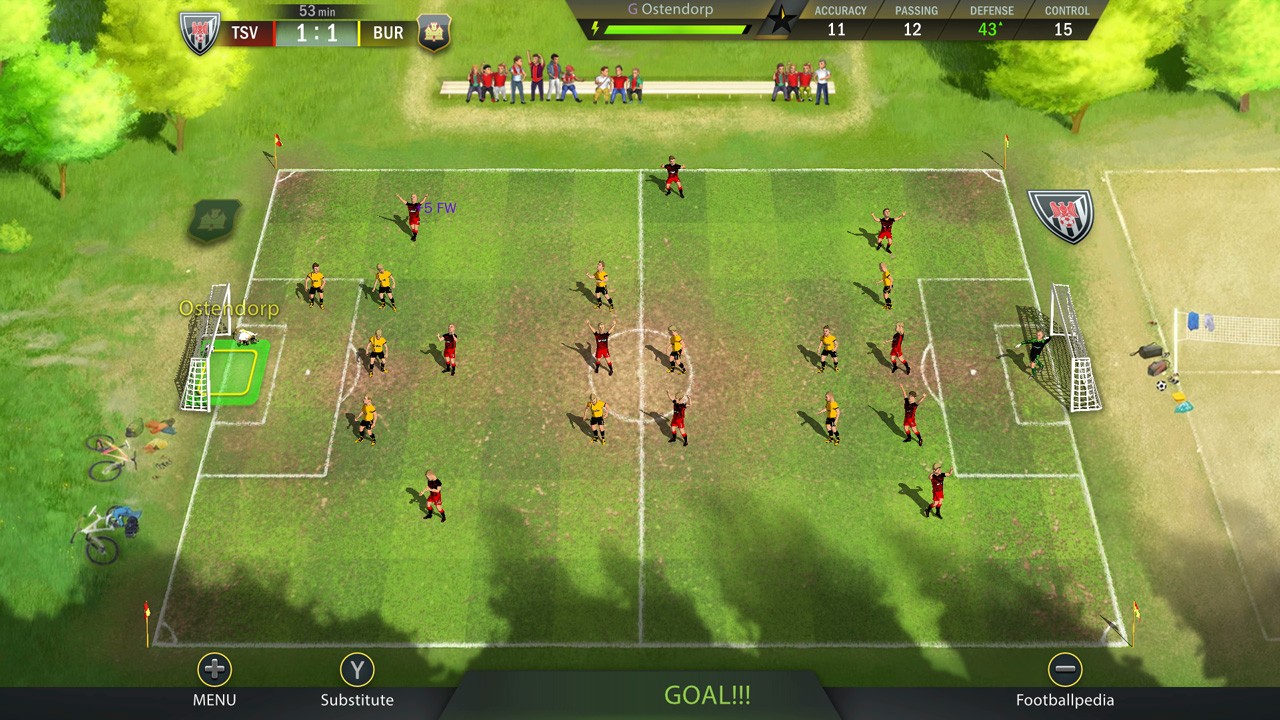 There’s a lot of customisation in Football, Tactics & Glory, choosing where your club begins etc. When you pick your club you’ll be brought to a fairly basic info screen. You receive emails from members of the club, like the Director, giving you advice or challenges to accomplish. You can pick your team, buy/sell players and coaching staff. Once you are happy you can move onto the game, which you can in most cases play, watch or simulate. If you choose to play, then this is when you will experience the turn-based part of Football, Tactics & Glory. You will have a limited amount of turns to win the ball, make a pass, do a skill, take a shot etc. The success of an action will depend on that players statistics and the statistics of opposition players near him. So if you have your best striker in front of a poor goalkeeper, then the chances of you scoring are greatly increased, but even your best players can mess up a simple shot or pass which can be very annoying. Some of your better players will have specific moves they can do, like a Rainbow Flick, which will give them a greater options when moving forward. Once your turn has ended, the opposition then have a chance to win the ball if they haven’t already got it and mount an attack. You will soon realise you can’t just move your players anywhere on the pitch because that will create massive gaps for the opposition to take advantage of.

Football, Tactics & Glory is a unique take on Football, it’s already been highlighted about how it combines strategy with turn-based tactics. There’s also a role playing element to Football, Tactics & Glory. You can improve your players as they gain experience the more they play which, in turn, improves their skills. You then need to consider employing coaches who also have bonuses that help improve your squads skills. One very important coach skill to acquire early on is the ability for your subs to get experience even when they don’t play. Obviously you can go out and buy new players, but that takes money; something you want to hold onto at the start until more players become available. The transfer system is very simplistic, you match the transfer fee and then that player is yours. It’s important to put time into your youth players as well because they will become more important the longer you play. 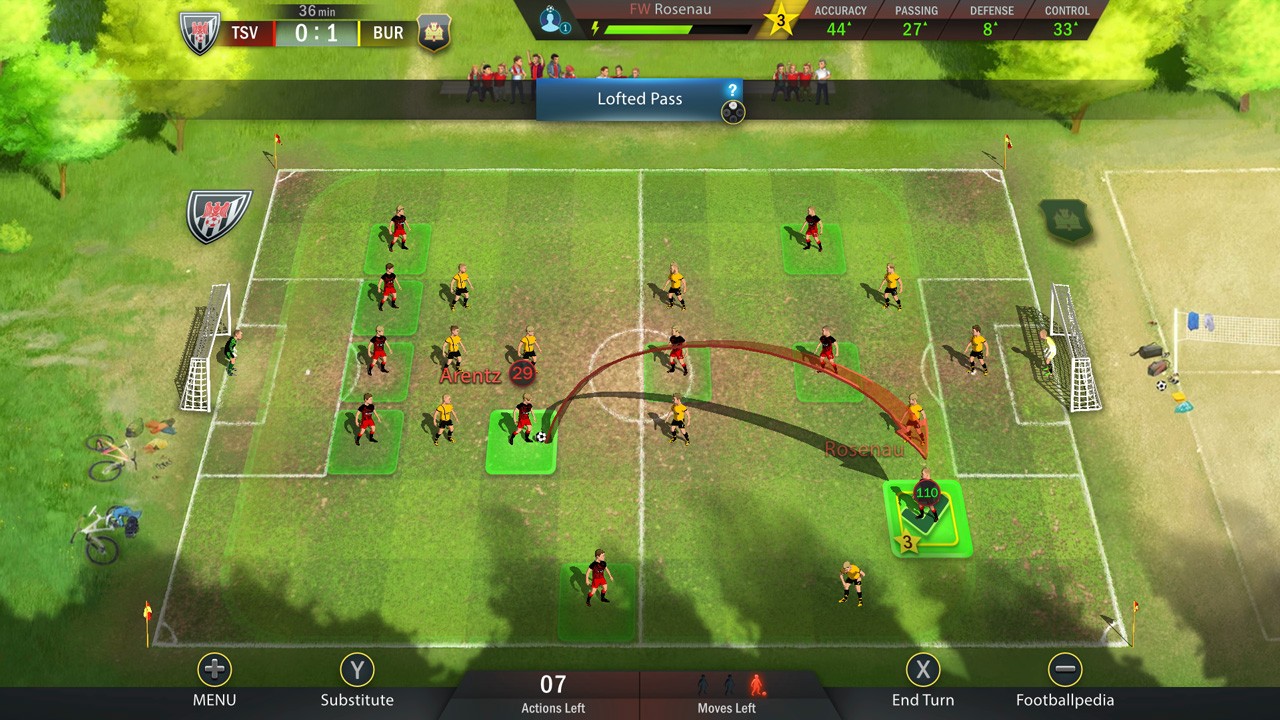 Graphically, Football, Tactics & Glory is not pretty on the eye, the sprites are pretty poor and don’t look great on a big television. The soundtrack is on the upbeat side of things but after a couple of hours you’ll probably turn the sound off. Due to the nature of Football, Tactics & Glory, at the beginning you will find yourself ending up in a lot of 0-0 draws if you choose to play. This is because you are limited to a certain number of moves within a match, once those moves have been reached then it’s half time, then you play the second half and you have the same number of moves left. Due to this, you will often find yourself get near the opposition goal only for your turn to end and more often than not the opposition will win the ball back.

If you have the time then Football, Tactics & Glory is something you will find a lot of enjoyment from.