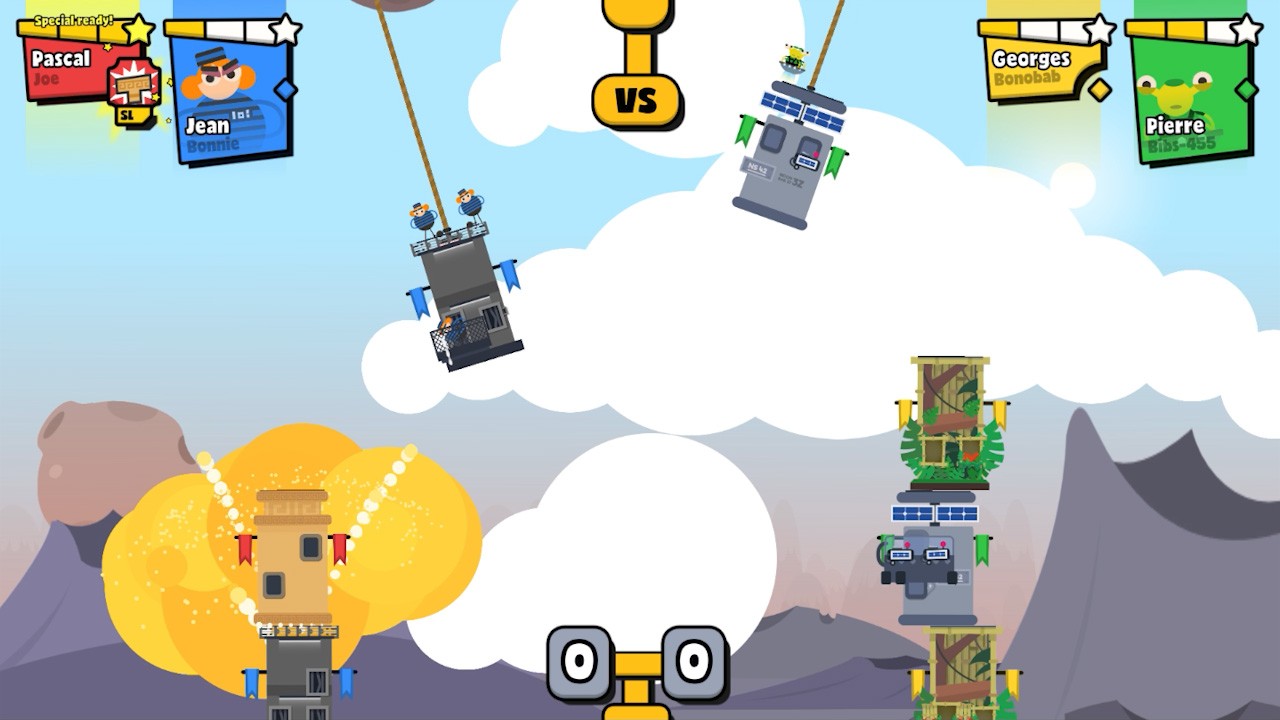 Tower of Babel: No Mercy should come with a disclaimer: this is multiplayer only. Unless I misplaced my glasses (I haven’t), there is no option to play this game as a solo effort unless you play online.

It’s a bit like titles such as Overwatch when it first came out; online only. If you weren’t aware of it and didn’t have an internet connection (who doesn’t?), you’d be in trouble. However, it does say so on the packaging. It’s just not advertised so much. While Tower of Babel: No Mercy clearly states that it is a multiplayer game, it doesn’t say that it is strictly a multiplayer game.

As an early release, in terms of review, the online feature was redundant as understandably, there weren’t any other players to compete with. I tried multiple times to connect with someone else online, but nothing. With this in mind, my time with the game is somewhat limited as I had to rely on someone else I know to have a game with me. In the time where I was alone, it was pointless. Sure, I could play the game and stack up my buildings accordingly, but there were no competitive elements, and I didn’t find the option to fill a stage with bots. It’s like playing Scalextric alone: fun for some, but for most, an isolated experience. No doubt the online play will improve once the game is officially released in late February, but as it stands, it wasn’t a mode I could try.

Let’s briefly focus on the single-player. There are three modes to choose from, but they don’t make a difference on your own. Going solo, you have full-screen real estate and begin with a foundation of a building. Above this is a crane that swings a building to stack on one another. It’s like when you have Lego bricks, and after the sensible approach of city building, you decide on who can build the tallest tower before it topples over. I still do this with my kids, and I’m usually the instigator of it. 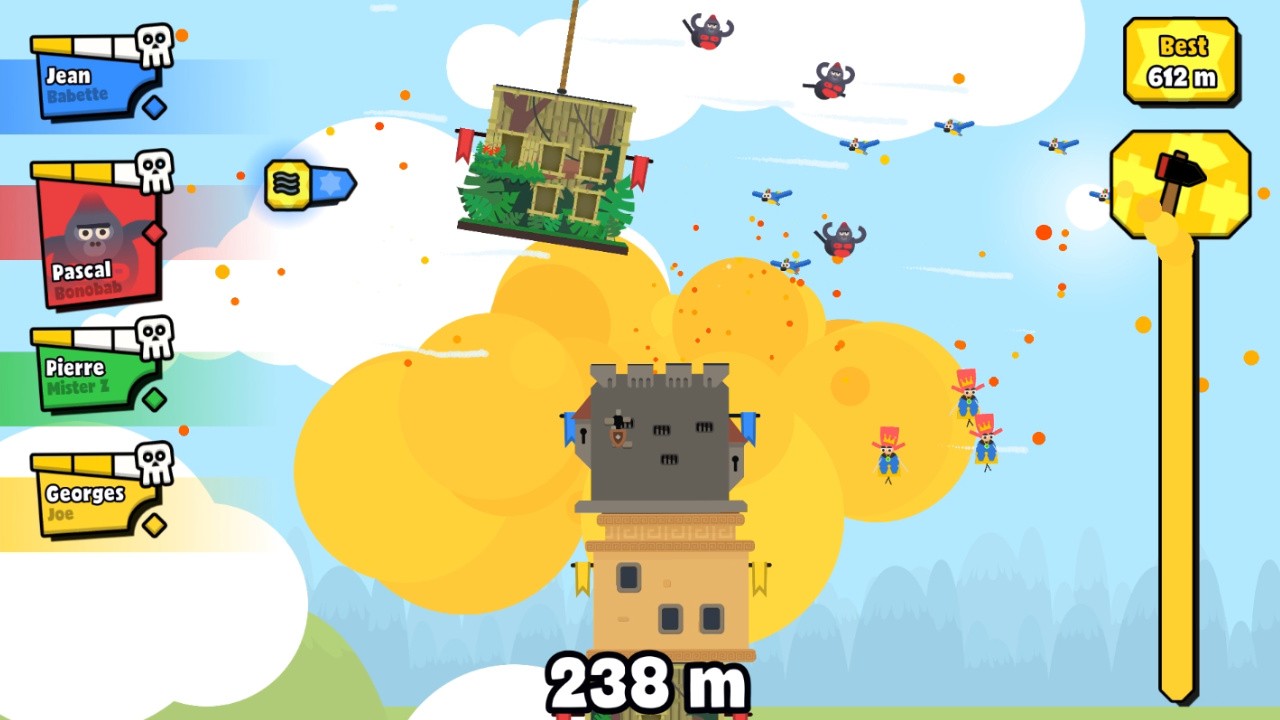 As you stack up the blocks/buildings, the tower starts to sway. Should you miss the mark or it wobbles enough, when it falls, it’s game over. The key then is to place each block directly in the centre, obtaining a ‘perfect’ in the process and awarded the most points (out of 100). It’s an incredibly simple concept, and there’s nothing else to it other than the rules and the added special power you can use. Again, this only applies when playing with other players. Even though you can add bots in a battle mode with another player, you can’t add them to a single game, which I find mildly perplexing and limits the game modes available.

Tower of Babel: No Mercy is the kind of game I’d download on my phone when at an airport, play it for a couple of hours and not likely to play again. However, with the advent of it being multiplayer on the Switch, my view is entirely different as the moment someone else joins the game, it is fun and competitive.

We’ve established that solo play is a bit redundant, as is the online play, so other than some instructions and configuring the controllers, the only other option is the multiplayer mode. There are three levels of play here: Co-Op, Selfish, and Battle. Co-Op is probably my favourite mode as you alternate turns in stacking up your blocks to build the highest tower, continually trying to get it bigger and better than the one before it. As always, the mechanics are straightforward: wait for the building to hover in the centre, press the A button to release it, then rinse and repeat. Arguably it’s not the most exciting of the modes, but I enjoyed bettering myself and getting a taller tower. The best effort was a mere 100m or so.

Next up is Selfish. Again, it’s one tower, much like the previous mode and you take turns in placing your buildings like a reverse Jenga. The slight difference here though is if the other player makes a mistake and the tower falls, you get the point. This is the perfect opportunity for sabotage, and that means placing your blocks on the edges so that the other player has to somehow stabilise the tower by distributing the weight accordingly. On top of that, you can use special moves against one another such as take their turn, drop a weight immediately on their block, forcing it to drop plus a few others. It’s interesting as you play the same shared goal to build a tower together, but are rewarded for being deceptive.

Last up is the Battle mode, and this is the mode I played the most. All the players have their tower to build, and you need to keep up the momentum with the person in the lead, or you’ll get left behind. Whoever places their blocks faster will receive the camera attention; as their tower moves up, the screen scrolls up too. If you are hesitant in placing a block, you’ll be playing catch up to the leader; otherwise it’s game over. 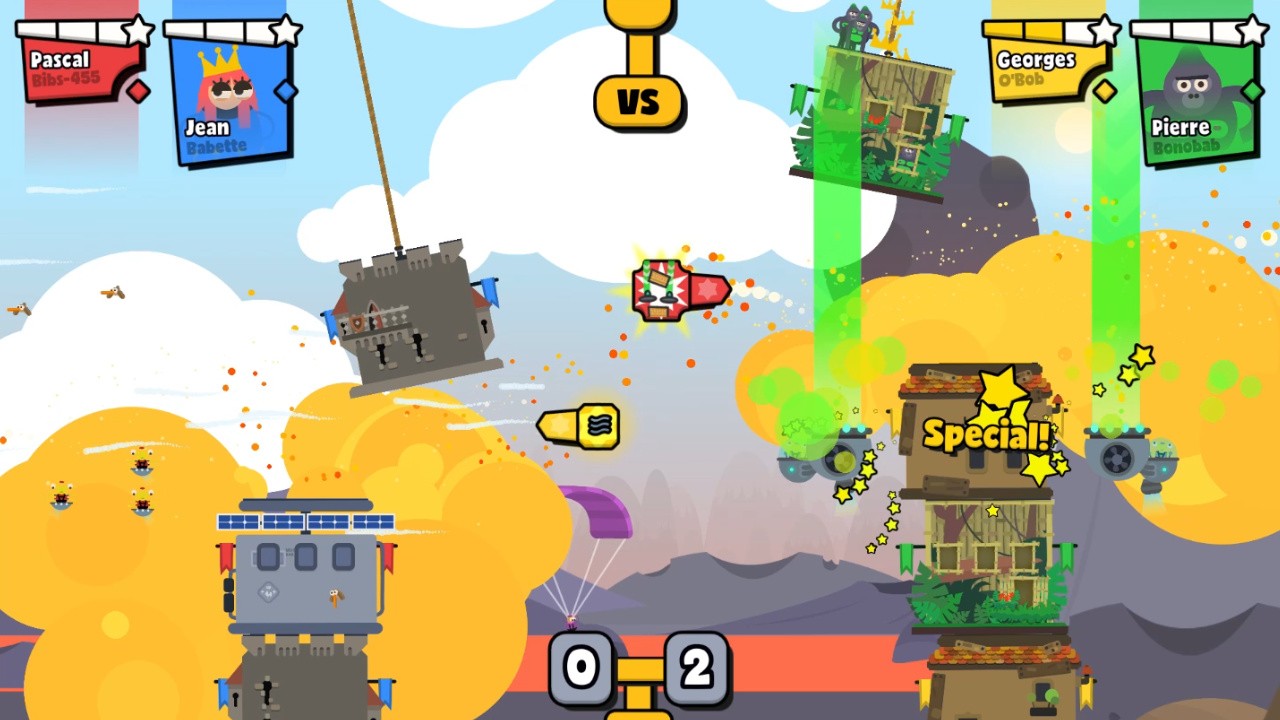 As with the other modes, you can use your abilities to sabotage the other player, but each time you perform a perfect drop, a gust of wind is generated in the direction of your opponent. This is perfect when they are mid-drop, only to find their building carried off-screen, thus losing the round. Referring to rounds, you can opt to run a best of three, five or infinite. With the Selfish mode, though, you need to get consecutive wins. If you lost a match, you’d be docked a point. In other words, it’s much like an endless mode and will only finish if you win three or five consecutive times in a row.

Lastly, we have the choice of characters. Each of them has their ability, and as you experiment, you’ll find the one best suited to you. Additionally, each character has their building design too, so apart from the coloured flags on the sides that indicate who is who, having a bespoke building helps identify who is who. I will add that the alien character was confusing as their building design was grey and neutral.

Tower of Babel: No Mercy is most definitely a mobile game. The graphics are satisfactory for what they are, and the physics of the blocks are relatively accurate and fun to play with. The music seems to consist of just one soundtrack, and while it isn’t something you’ll turn up, it has a certain feel of The Lion King game. Maybe it’s just me.

To conclude, Tower of Babel: No Mercy is a non-starter when it comes to solo play. Unless there’s a later update that allows one to add bots into a game or the online mode becomes populated with other players (inevitable upon release), this is strictly a multiplayer game. However, for something so basic and stripped down, it’s fun to play and dare I say, pretty addictive. By the time I got around to playing the multiplayer matches, both myself and the other player would say ‘one more game’ and egg one another on. Tower of Babel: No Mercy isn’t likely to be the game you’ll be playing endlessly for the next couple of months, but if you want a fun local multiplayer, I’d give it the thumbs up.

Tower of Babel - No Mercy Review

A lightweight mobile-type game, the actual gameplay in Tower of Babel: No Mercy is pretty addictive and fun too. Just ensure that you have someone guaranteed to play this with you as other than the future online play, it won’t keep you entertained by yourself.