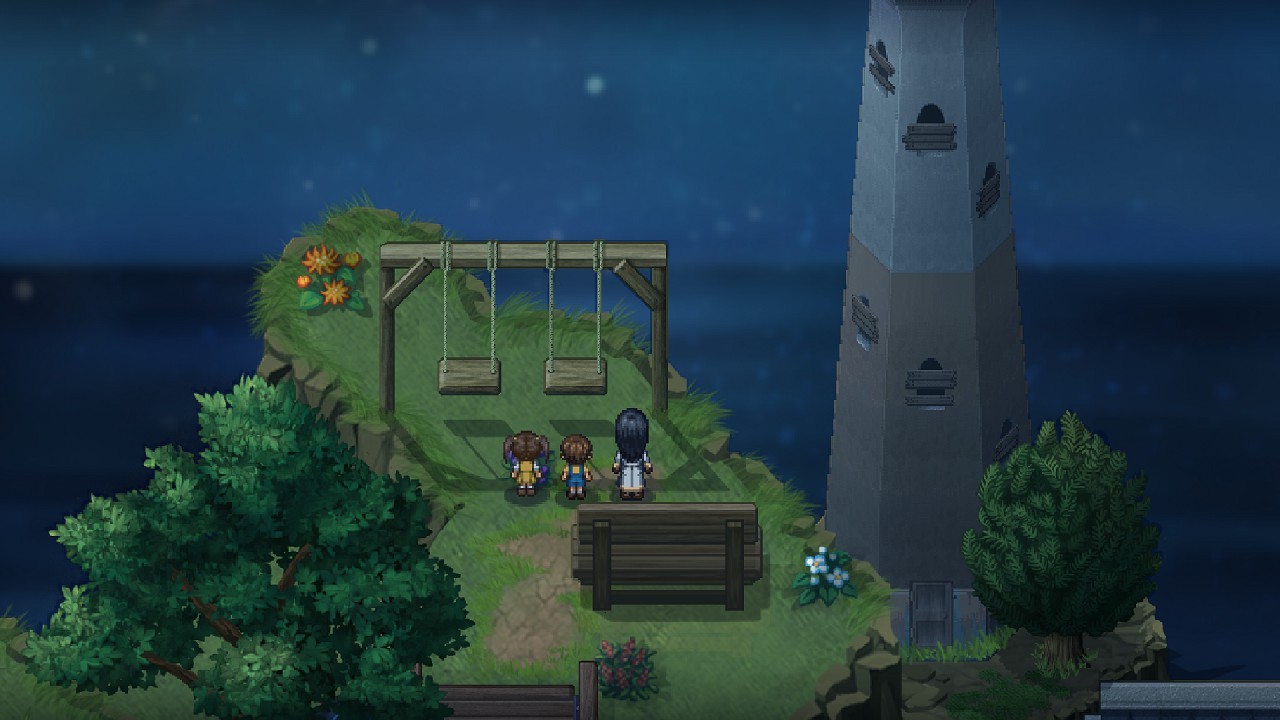 Frank Sinatra once revealed that he had a few regrets, but, then again, too few to mention. We all have facets of our lives that we look back at with different levels of embarrassment, shame, or outright pain as to what did or did not happen. But we have to soldier on: in spite of everything, you simply need to keep on living. We can’t do anything to change what’s already happened, and there’s no sense reliving the past and retreading our missed opportunities and lost “what ifs.”

But what if we could?

Freebird Games has a perchance of taking a slightly unorthodox vehicle and using it to deliver a fairly robust, intriguing and, ultimately heartbreaking tale of loss, love and an unusual and questionable way to confront the end of a life. To the Moon is the tale of three important people, though players will quickly see that this journey affects so many others. At the core are Johnny, Dr. Eva and Dr. Neil. Johnny is our patient, an old man who is dying and on the way out of his life. More than anything, Johnny dreamt of going to the moon, though he isn’t sure why, and that’s where the doctors come in. You see, they represent Sigmund Corp, a group that grants the dying wish of altering someone’s memories so that they believe something happened, even if it didn’t. In this case, the two doctors will be implanting the idea that Johnny really did travel to the moon, at least on some level, but they can’t simply snap their fingers and make it so. They need to dive into Johnny’s memories through mementos and cornerstone events, and, through trial and error process, find the root of Johnny’s desire to grant him his final dream.

A few things to know going into To the Moon. Firstly, do your best to avoid spoilers: the storyline is the entire reason you’re playing this relatively short game (five hours, max), and you don’t want to cheat yourself out of any of the reveals. Secondly, there is only one ending: even though this feels like an interesting take on a visual novel approach, it’s kinetic in nature, and there’s only one ending you can ultimately reach. Lastly, despite being created in RPG Maker (which was an excellent vehicle to deliver this story), there’s a very limited amount of gameplay in terms of exploration, collecting or even really interacting beyond reading, so keep that in mind. If you’re looking for something that’s more meat than broth, you might need to find another game right away as to not ruin the experience. If you’re on board, either through curiosity or because you’ve heard so much about the game, read on. 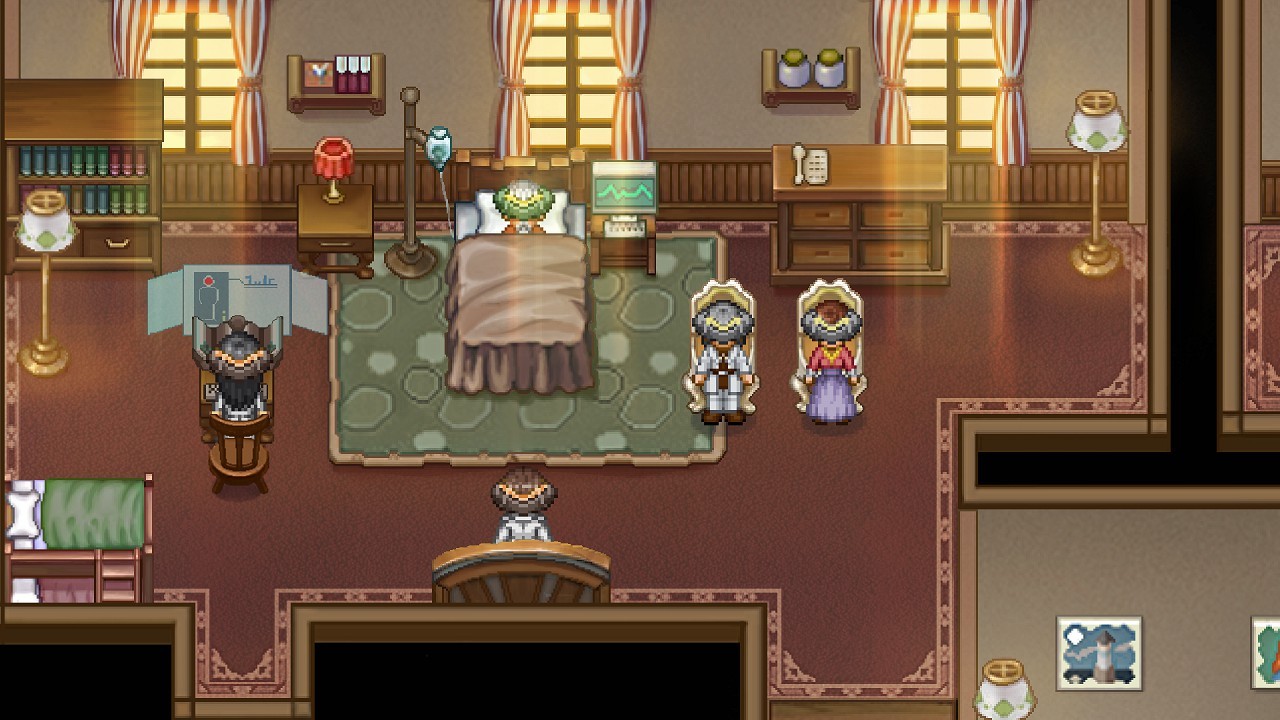 With To the Moon, a vast majority of the game is manipulating things in both the present and the past. The two doctors will work, usually behind the scenes, to help guide Johnny through the halls of his mind to unearth specific events and items that will trigger greater effects and ideas. Usually, you’ll be able to encounter a situation and then make a decision about what to do with it, maybe having a couple of options for what to say or what to do. After the encounter transpires, you’ll update your data journal on this project (you are both scientists, after all) and this allows you to go back and revisit these specific encounters. More often than not, there’ll be clear options that will move the story forward or sort of peter out, but you can easily explore all choices through the journal work, so don’t feel bad if you make a mistake or lead Johnny astray at first. This isn’t a game with game over screens or lost exp: there’s already too much at stake to also gamify the potential missteps.

No, with To the Moon, you need to be able to transport yourself into the shoes of the characters within the game, and Freebird Games makes that surprisingly easy with the 16 bit approach and the sepia-tinged memories of someone who is struggling with the final obstacle of life: death. Here is a humanistic story that should resonate with most people on multiple levels. To need to accept something that is borderline inconceivable because of our own inability to process it. Johnny is raging against the duality of losing both the only thing he has ever known (his life) and the echoes of doubt that ring through his mind as the light begins to fade. You need to watch an old man relive times that seem impossible for someone we view as old. You see Johnny as not only a younger man with energy and skill, you even see him as a young child, at the beginning of his road, and marvel and gasp at what he must overcome and process (or, as it turns out, not process) from a very early age. To the Moon does a phenomenal job of writing everyone as believable, relatable characters, and you sympathize with the task the two doctors must undertake in order to fulfil their jobs. To treat this voyage into someone’s heart as simply “a job” while still allowing their fragility to poke through and align with Johnny’s losses and sadness, it’s pretty incredible. 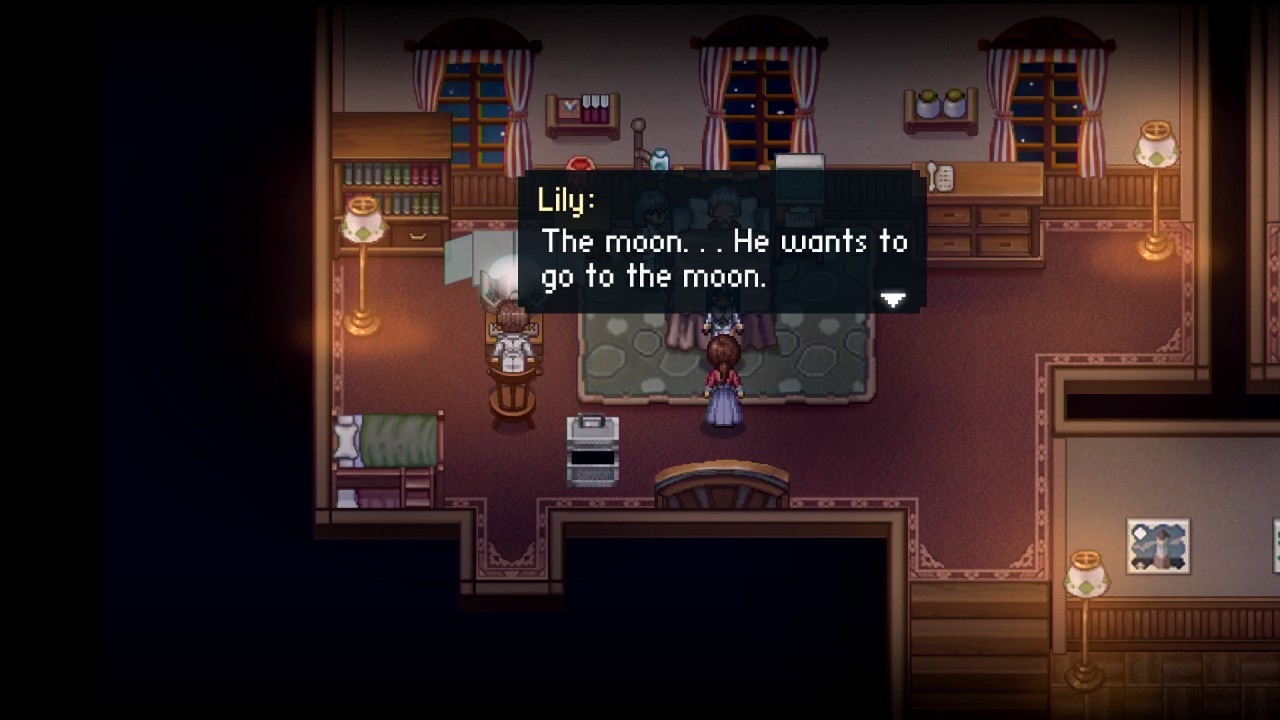 Besides the oldschool graphics that do a great job of showcasing the worlds within Johnny’s mind and the home where he lives today, the soundtrack of To the Moon is a vibrant, appropriate blend of different tracks and ambient pieces. From melancholy and wistful to the peckish energy that you associate with youth and potential, there’s a wide array of music that you immediately pair with the events of the game. This is one of those soundtracks that’s great on its own, but, due in part to the nature of the tale, you’ll always remember what you were doing when you heard the music. I don’t think I could use this to study because I’d be remembering too much of my journey, but it’s still a pleasant and enjoyable listen for rainy days and trying to relax at home. Hell, you might want to give it a listen beforehand so you can separate the sadness from the songs ahead of time.

As I mentioned up top, To the Moon won’t be for everyone. It’s more story than game, the puzzles you solve to unlock Johnny’s memories are pretty static and straightforward, and you know the ending from the beginning: Johnny is going to die. But it’s everything you encounter in the meanwhile, including the final scene that Johnny is able to witness in his mind’s eye, that really destroys you and makes the whole ordeal so beautiful. If you’ve got a few hours and are looking for something that tests your ability to deal with frission and cathartic release, then this might be the dream you want to wake up to.

To the Moon Review

Now we look upon the moon in a different way, and we remember, we smile, and we shed a tear for what was, what could have been, and what we always hoped may be.